Arturo Vidal issued a warning to Bayern Munich before Barcelona faced them in the Champions League quarter-finals on Friday night.

His old club at won their eighth Bundesliga title in a row, but the Chilean did not think the Bavarians would have things quite as easy against Barca as they do against domestic opponents.

As they do against most sides in the Bundesliga, Bayern Munich ran riot against Barcelona, registering a remarkable 8-2 win.

It took just three minutes and four seconds for Bayern to break the deadlock through a fantastic team move where Robert Lewandowski combined with Thomas Muller to find the net.

Barcelona went level through an awful own goal from David Alaba minutes later before Barcelona spurned a few good chances to go ahead.

After that, however, the Germans dominated the first-half. By the 31st minute, Ivan Perisic, Serge Gnabry and Muller's second goal had Bayern Munich leading 4-1 and Hansi Flick's men were beginning to think about a potential semi-final with Manchester City.

Since Flick took over in November, they have won 31 of 34 games, lifted the Bundesliga trophy and added the DFB-Pokal. Now they are just two wins away from becoming European champions for the sixth time.

No other side left in the Champions League has won the competition even once. Bayern have the history, the pedigree and this season, they have the team unity to go all the way for the first time since 2013.

Despite Luis Suarez netting after half-time, Joshua Kimmich restored the three-goal advantage following an incredible dribble from teenage full-back Alphonso Davies, which was Bayern's 152nd goal of the season – a new club record, surpassing Jupp Heynckes' 151 in their treble-winning season and Pep Guardiola's 150 in his debut season in charge at the Allianz Arena. 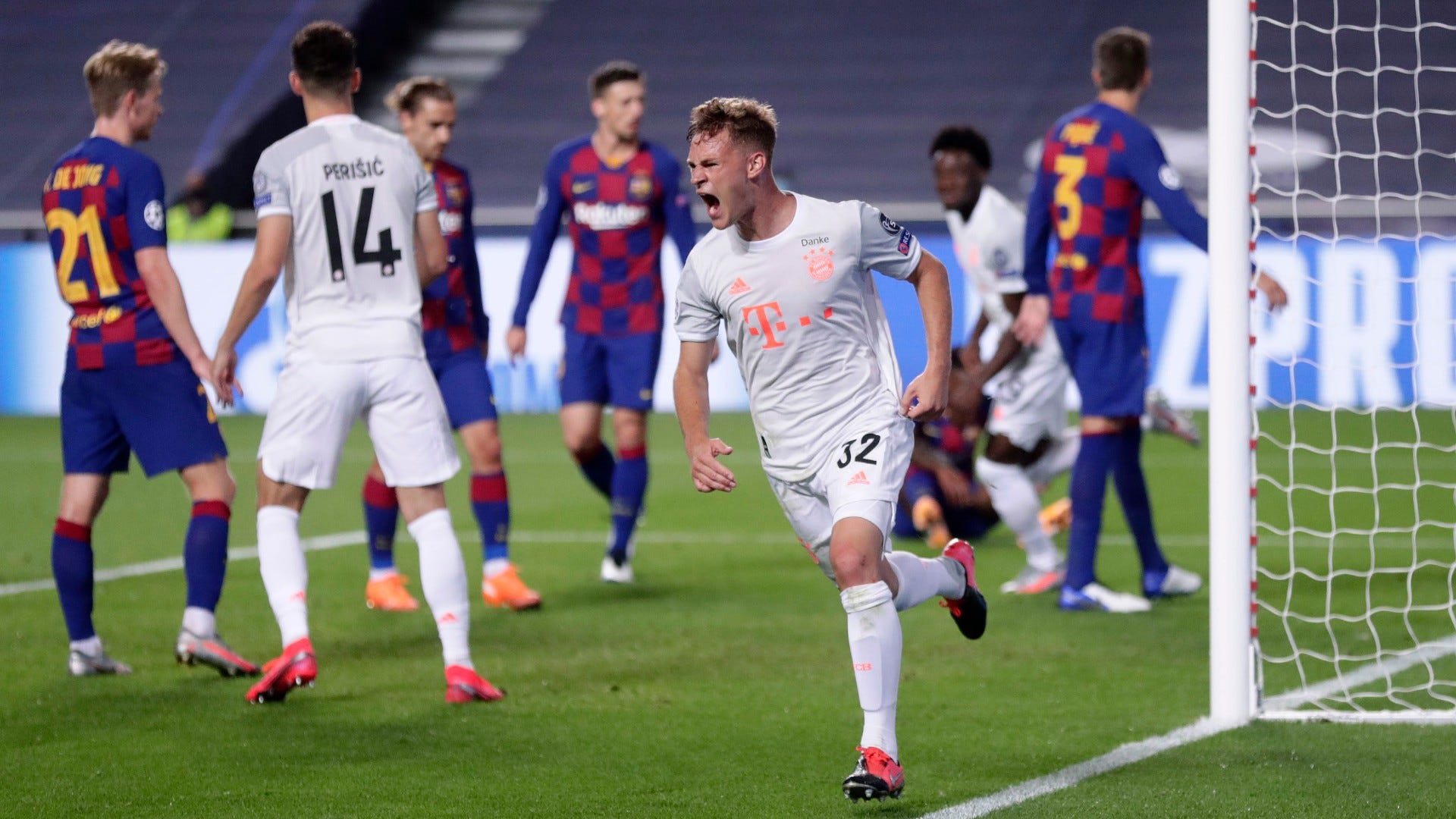 The majority of those came in the Bundesliga, but their rate in the Champions League this season has been incredible. This team do not give up and enjoy each and every goal they score.

They did not even stop after scoring their fifth, with Lewandowski heading home late on to make it 6-2 thanks to an assist from on-loan Philippe Coutinho, who then netted the seventh and eighth against his employers.

Bayern now have 39 goals in nine European games this season. That included the 14th European goal for Lewandowski, the tournament's top scorer. The Polish forward also provided an asisst for the opener, taking his assists tally to five in the competition in 2019-20 – going level with Hakim Ziyech and Kylian Mbappe.

Lewandowski had a hand in all seven goals in the round of 16 games against Chelsea, but this Bayern team is not just a one-man affair, like Barcelona, or a collection of big names and egos like some of the Bavarian sides in the past.

Flick has united the dressing room. Gone are the days when leaks would come out from disillusioned players. Instead, they are all singing from the same hymn sheet and it shows on the pitch.

They press high up and relentlessly, which worked a dream against Barcelona's aged frontline, while passing is quick and with intention, unlike some previous Bayern teams who had all the possession but spent more time recyling the ball than creating chances.

Excluding the own goal, six different Bayern Munich players got on the scoresheet against Barcelona and seven different players provided an assist.

The eighth goal was scored and assisted by two substitutes, showing it does not even matter which players are on the field under Flick. His tactics and system work so well and have brought so much confidence to this squad that the players are somewhat interchangeable.

Even better for Bayern is the fact that first-choice right-back Benjamin Pavard could be fit for the semi-final.

On this evidence, it does not really matter who starts for Bayern or against them, nobody can stop them.

The best team in the world were in action in Lisbon on Friday night, but unfortunately for Vidal, it was his former club.