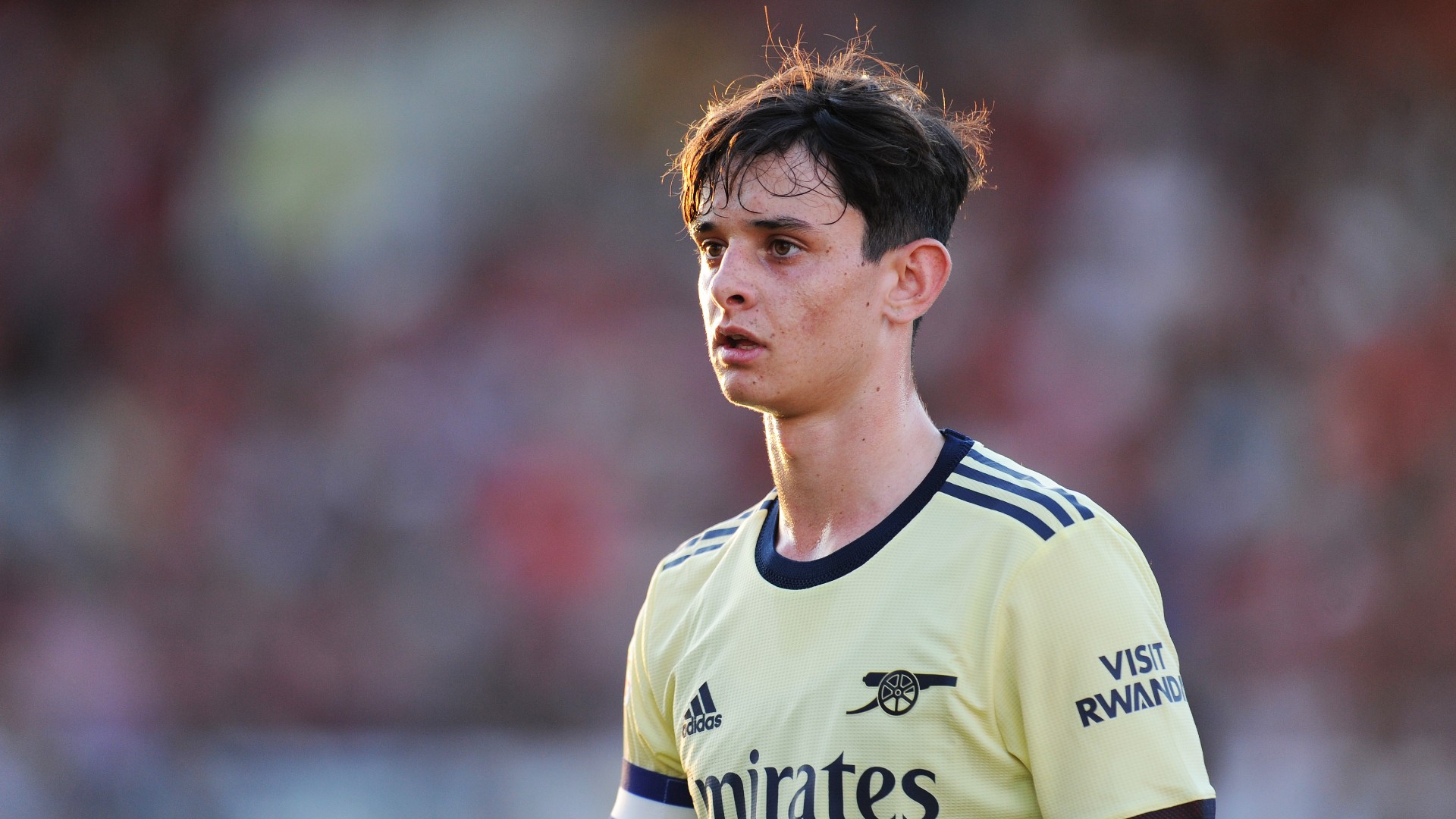 It was a goal that perfectly encapsulated why there is so much excitement about Charlie Patino at Arsenal.

The 17-year-old was in action for Kevin Betsy’s Under-23s against Manchester United earlier this month and had produced a fine performance in the heart of midfield.

But, as the clock ticked into stoppage time and with Arsenal leading 2-1, the best was yet to come.

As they searched for a late equaliser, United attempted to launch one final attack from deep inside their own half.

Martin Svidersky looked to run the ball out of defence, but Patino chased him down and won back possession with an excellent tackle before driving towards the penalty area.

The midfielder, who has been described as one of the best talents to ever come through Arsenal’s Hale End academy, then glided through two challenges before easing past a sliding Phil Jones, who was one of the senior players in the United side that day.

Another was goalkeeper Dean Henderson, who Patino now bore down on. The England international stayed on his feet as long as he could, but the young Gunners star simply lifted the ball over him with a sublime finish to seal the win for Arsenal.

The goal quickly went viral, amassing more than one million views in 24 hours, with Arsenal fans who were already excited about Patino’s potential salivating at the composure and technique he demonstrated as he left four United players in his wake.

And it was a moment of magic which sums up the start to the season Patino has enjoyed.

He has become a cornerstone of Betsy’s new-look Under-23s and has trained consistently with Mikel Arteta’s senior side at London Colney.

He has made a huge impression on the first-team squad and the coaching staff, which was highlighted when he replaced the injured Mohamed Elneny just 30 minutes into a behind-closed-doors friendly against Brentford during the last international break.

Patino played for an hour during the 4-0 win, and sources say Arsenal’s senior stars were hugely taken with the way he dictated things in the midfield.

The teenager then produced a sparkling display against Swindon Town as Arsenal’s U21s were beaten 2-1 by in the EFL Trophy.

It was a performance that proved Patino can compete against senior professionals despite his young age and one that added even more fuel to the growing calls for him to be handed his full Arsenal debut.

The absence of European football this season has restricted his opportunities, with the likes of Bukayo Saka, Emile Smith Rowe and Joe Willock all handed chances to impress in the Europa League group stages in recent years.

But Arsenal host League 1 side AFC Wimbledon on Wednesday night in the Carabao Cup third round and that represents the perfect opportunity for Mikel Arteta to send Patino a clear message of trust.

The left-footed midfielder, who likes to operate as a No.8, clearly still has much to learn, but he needs to start seeing signs that the pathway Arsenal have laid out for him does lead to the first-team.

Saka was handed his senior debut away to Vorskla in the Europa League just two months after turning 17 and was given his first taste of Premier League action just over four weeks later.

Patino turns 18 next month and has yet to be handed his first taste of senior football, so Wednesday night’s game against Wimbledon feels like the ideal moment for the teenager to take the next step in his promising career.

“Charlie has an amazing awareness of where he is on the pitch and where other players are on the pitch,” Brian Stapleton – the Arsenal scout who discovered Patino – told Goal during an exclusive interview in August.

“His vision is so good, he can split a defence with a pass. And he has that desire to do well. When he’s on that pitch he can be an animal, he’s a winner.”

Stapleton added: “Of all the years I’ve been scouting, he’s the best kid I’ve ever seen. He was 11 and I think he was playing in the [Luton] Under-13s, and I was like ‘wow’.

“His first touch was unbelievable, his vision, his awareness of space. He was on another planet to anyone else on the pitch.

“I made a phone call to the head of my department at Arsenal at the time, Shaun O’Connor, and said ‘I don’t need to see any more; you need to sign this kid straight away.’”

Patino made the move from Luton to Arsenal in 2015 and has progressed rapidly through the age groups.

He signed his first professional contract when he turned 17, but rules meant that deal could be for no longer than three years.

A new, long-term contract is expected to be agreed once he turns 18 to fend off interest which is growing from rival clubs, both in England and abroad.

Patino’s father, Jules, is Spanish, and Barcelona are long-term admirers and have expressed their interest in the past.

Sources close to the player insist that Patino is happy at Arsenal, however, and that he and his family are more than satisfied with the way his progress is being managed by the north London club.

He is committed to Arsenal and has just signed up to a long-term commercial deal with the club’s primary sponsors Adidas, who are well aware of his potential worth to the brand over the coming years.

But like any young player, they have to be shown that a pathway to the first team does exist, and that is why Wednesday night’s game represents the perfect opportunity for Arteta to hand the teenager his first senior minutes.

Patino has breezed past everything that has come his way so far this season. He now stands on the verge of receiving the ultimate reward.