When you walk into the main building of Greenford High School, you are greeted by a signed England shirt that hangs proudly for all to see.

It was donated by a former pupil who left three years ago, but whose influence remains as strong as it was during his five-year stay at the west London institution.

That pupil is Bukayo Saka, and during the past fortnight Greenford High School has been celebrating its former pupil as he prepares to showcase his prodigious talents on one of the biggest stages of all: the European Championship.

“We are all so proud of him,” says Dipesh Patel, Saka’s former football coach at Greenford High. “We always knew he was amazing. But we obviously couldn’t have expected him to have had the last year-and-a-half that he has had, breaking into the Arsenal team, being such a massive player for them and then getting into the England squad.

“It’s just incredible the rise he has had.“

Saka’s inclusion in Gareth Southgate’s 26-man England squad for Euro 2020 caps a remarkable three-year journey for the teenager. It started in November 2018 when he made his senior debut for Arsenal away against Vorskla in the Europa League.

Since then, he has made himself one of the first names on the team sheet in north London and has flourished while the majority of the club’s senior stars have struggled alongside him.

Such were the quality of his performances during the 2020-21 campaign, he was named Arsenal’s Player of the Season, while he was also been nominated alongside the likes of eventual winner Phil Foden and Mason Mount to be named the PFA’s Young Player of the Year.

‘Bukayo Saka FC’ is a term that has become ingrained in the vocabulary of Arsenal fans during the past 12 months when it felt like the teenage attacker was single-handedly having to rescue Mikel Arteta’s faltering side. 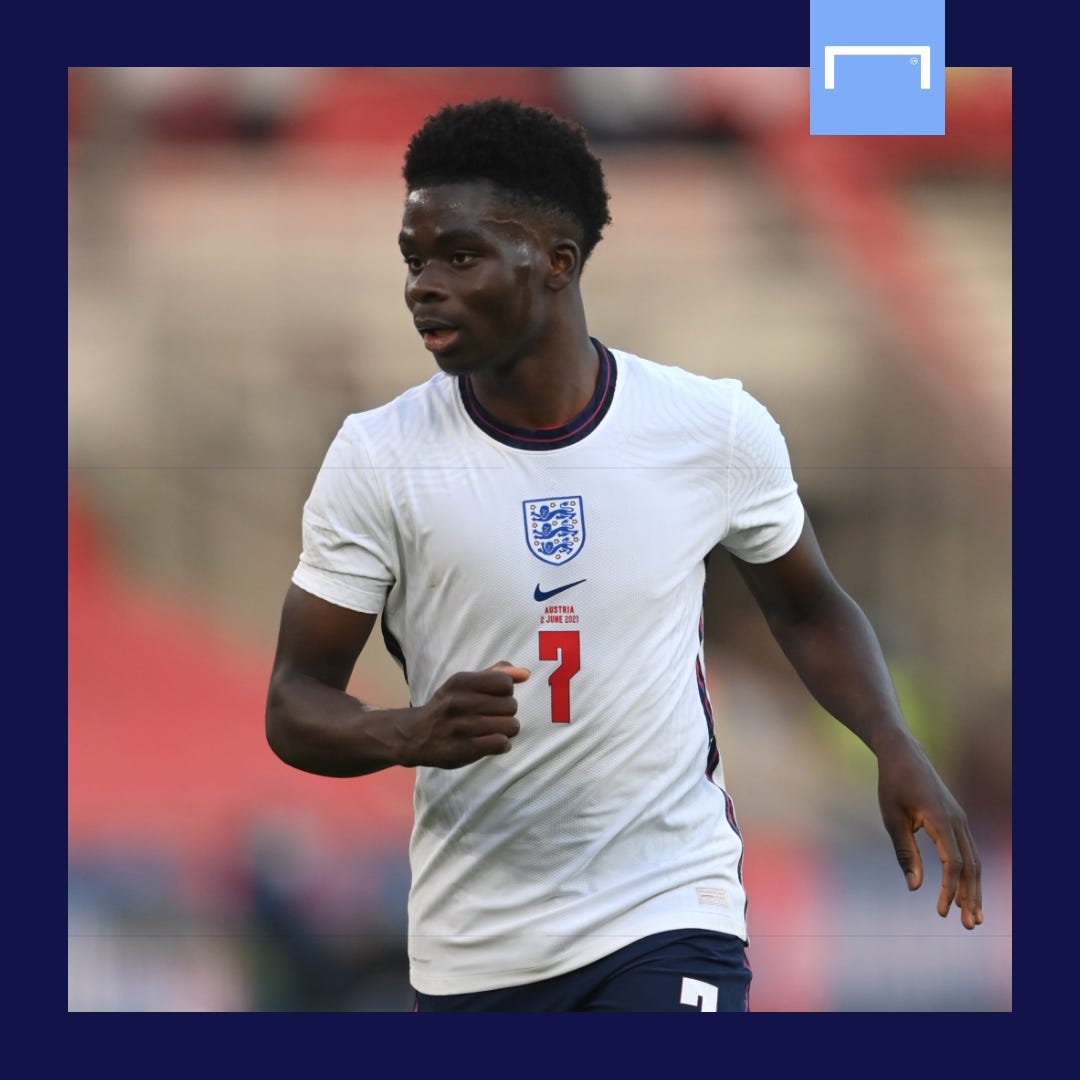 His performances may have dipped slightly over the final weeks of the season, but had he not stepped up around Christmas time, when Arsenal were drifting towards the bottom three, then the story of the second half of the campaign at the Emirates Stadium would probably have centred around a relegation battle, rather than a late push for Europe.

Clearly, modesty is another string to add to the bow of a teenager who has always been seen as a star in the making.

Saka was first spotted while he was playing for his local side Greenford Celtic as a seven-year-old. Even at that tender age, he had professional clubs queueing up to take him, but when Arsenal showed their hand there was nowhere else he was going to go.

“I had invitations from Spurs, Chelsea, Fulham and Watford but the only choice was Arsenal,” explained Saka. “I enjoyed the way that they played so the choice was easy for me.

“I trained at Hale End and then signed when I was nine years old.”

From that moment on, it has been clear to anyone who helped guide Saka along the way that he was destined for the big time.

“You could see that he wanted to run at people,” said Arsenal legend Thierry Henry, who worked with Saka for a short spell when he returned to the club as an academy coach. “He always wanted the ball and he was brave on the ball.

“It was too early to tell [how good he would be], but when I saw him breaking into the first team after I’d left, I was like wow. It’s amazing.

“I always liked the attitude of the kid and the commitment. What I like about him is that he cares about his club and he will do whatever to make sure that the team wins. You have to respect that.”

Football has always been central to Saka’s life. Growing up in Greenford, he spent hours playing on the green outside his house with his brother Yomi, who was on the books at Watford until he was 14.

His exceptional talent was well known around the area, but he was not the type of boy who looked to rub people’s noses in it. In fact, when he moved to Greenford High School as an 11-year-old, initially he did not even try out for the school football team.

“Bukayo didn’t turn up to the first couple of sessions,” recalls coach Patel. “When I picked my first side, the boy I picked as captan said to me, ‘do you know we’ve got this kid in our year who is amazing?’” 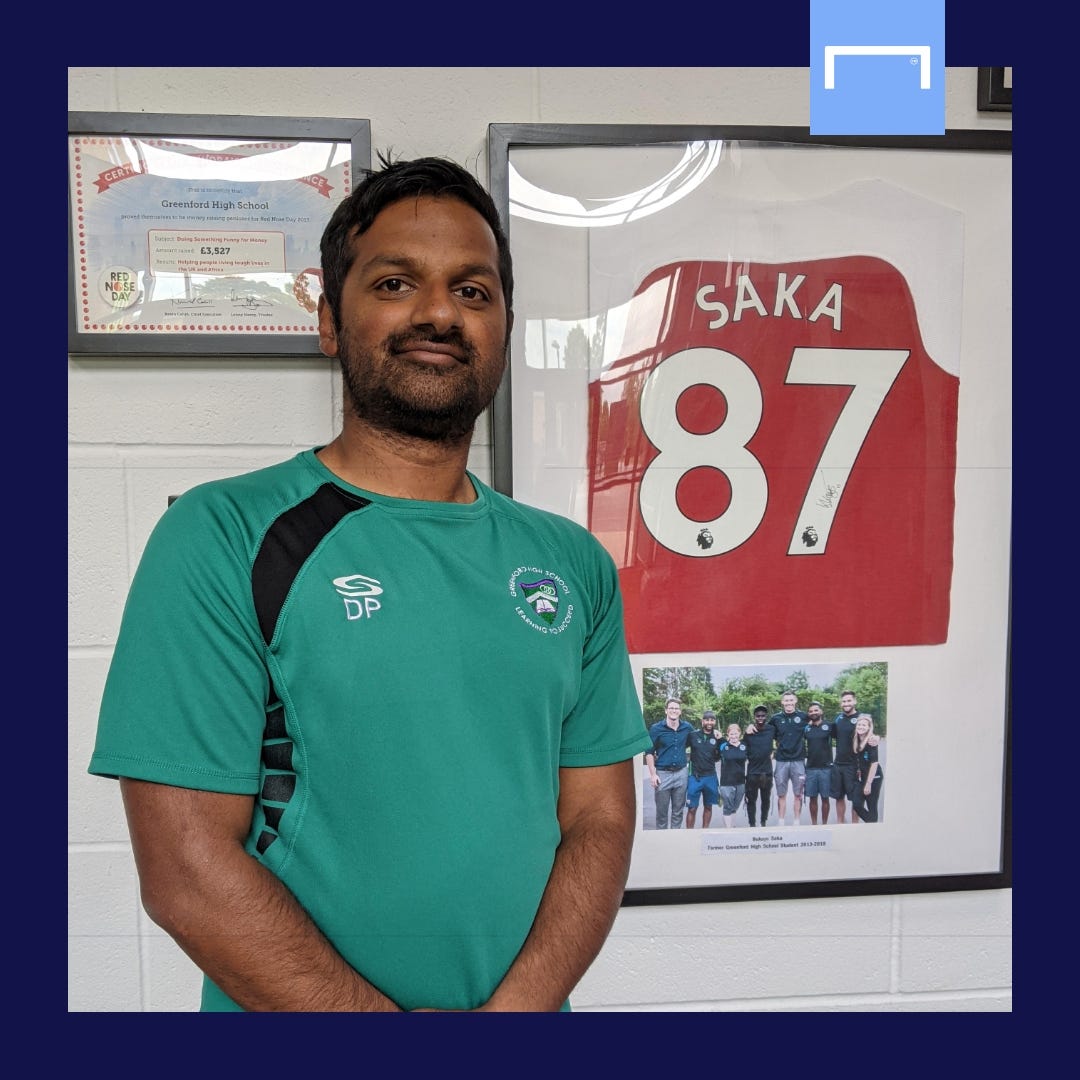 “So I told him to make sure he brought him the following session.”

Patel’s captain did what was asked, and it did not take long for Saka to write his name into Greenford High history.

“The first time I saw him it was just ‘wow’,” said Patel. “He was very special.

"In his first year we lost in the Borough cup final, but the next year we won it all. We won the Ealing Borough competition, the league, the cup and then we won the County Cup.

“For our school that was a first and maybe a last. It was incredible. It just had such a positive impact on our school and Bukayo was key to that.

“He just gave us that extra edge with his quality, especially in some of the tighter moments. But It wasn’t all about him. He was always such a massive team player.”

Saka stopped playing for the school team after that all-conquering season, with his commitments to Arsenal increasing as he got older. He was soon taking day release from school, spending one full day a week training at Hale End, all while continuing to study for his GCSEs.

Many in his position would have fallen behind with their school work, but not Saka - who went on to receive four A stars and three As.

“He worked so hard,” says Patel. “He would get in incredibly late from training with Arsenal two or three times a week, but would always catch up on all his work and his homework, which he would do late at night.

“We will have his picture up in reception for a long time. Not just because he’s an incredible footballer, but because he’s this role model student and that’s a great sell for us.

“When we talk to our kids, especially the ones who like football, we tell them how important Bukayo’s studies were to him and how he never got in trouble and always did his work, all whilst training for hours and hours a week.

“He’s a massive inspiration, to staff and students.”

After leaving school, Saka joined Arsenal on a full-time basis as a scholar, moving from the club’s Hale End academy to the training centre at London Colney. And this was when his talents really started to flourish.

“It was very obvious that he was going to be a top talent, especially when he got to the Under-16s when he really started to blossom,” said Steve Morrow, the former head of youth recruitment at Arsenal and the Football Association’s new head of player selection and talent strategy.

“When Bukayo was younger, his physical qualities stood out to a lot of people, they are really obviously qualities.

“But you have to look very closely at their technique as well and how they handle the ball under pressure and their decision making, Bukayo had a real balance of all of those.” 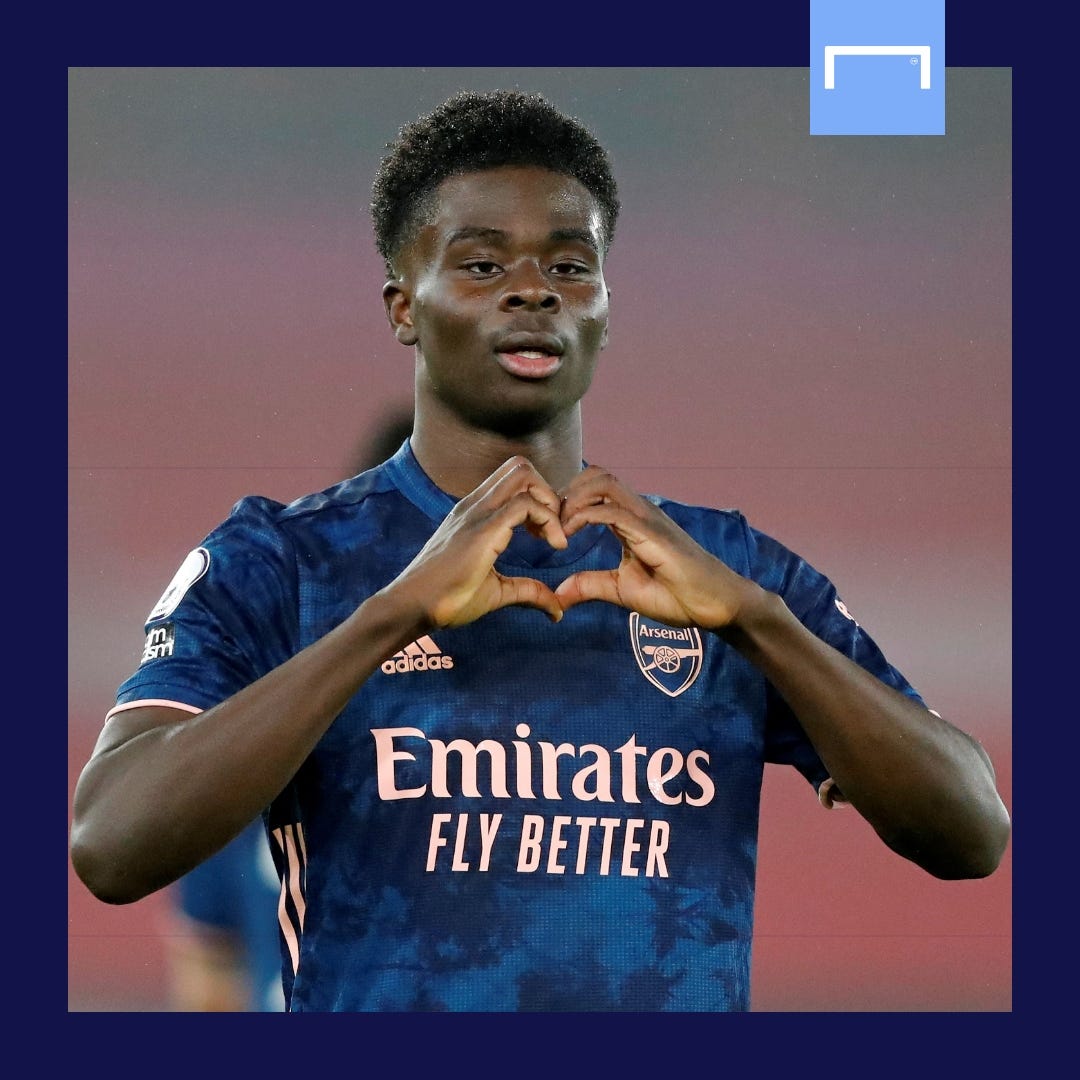 Once Saka made the permanent move from Hale End to London Colney, it became a matter of when and not if he would make his first-team debut. Unlike many his age, there was never really a chance he would go out on loan.

He had long been earmarked as a player to immediately make his mark with the senior side. And that happened on November 29, 2018 when Unai Emery gave him his debut off the bench in Kyiv as Arsenal beat Vorskla 3-0 in a Europa League group stage clash.

From then, he has never looked back and that has come as no surprise to anyone who has ever played with him.

“If Bukayo didn’t go right the way to the top, then there was no hope for any of us,” said Daniel Ballard, Arsenal’s 21-year-old centre-back who came through the ranks with Saka.

“He was an U16 playing in our U18s side and he was consistently the best player. If there was one person who you knew would go and score you a goal or produce a bit of magic, it would be him.

“Even in the U23s, I remember that a lot of our hopes were put on him, or mine were anyway. He was the one person I knew would score or win us the game.”

Since making his debut in Ukraine, Saka has gone to make 88 appearances for Arsenal, winning the FA Cup along the way. As well as scoring 11 goals, he has contributed 19 assists, more than any other player during that timeframe.

He has also become an England international and capped off a memorable season by scoring his first goal for his country last week.

“It’s probably the biggest moment of my career so far,” Saka said after scoring the winner against Austria. “You dream of that as a kid, scoring for your country. It’s an amazing feeling and I hope I can have this feeling many more times.”

A boy who just a few years ago was firing his school to County Cup glory now has his sights set on helping England to their first major trophy since 1966. The whole nation will be behind him, but nowhere will the support be stronger than back at Greenford High School.

“We are so very proud,” said Dipesh. “We have a Bukayo watch amongst us every time he plays. Some of the new kids think I’m joking when I say Bukayo went to our school, I have to pull out old photos and prove it to them.

“It’s a bit unbelievable for a little school like ours to have helped produce someone who is going to the Euros.”