It has been nearly a year now since Arsenal signed Cedric Soares on loan from Southampton.

During that time the Portugal international may have made his move permanent by signing a four-year deal with the Gunners, but he had almost become Arsenal’s forgotten man.

On Monday night, however, having been handed his first Premier League start of the season by Mikel Arteta, Cedric gave everyone a reminder that he has what it takes to still make an impact in north London.

The experienced defender was excellent against Newcastle having replaced Hector Bellerin on the right side of the back four, and even capped his fine showing with an assist, setting up Pierre-Emerick Aubameyang for the third goal after some neat link up play with Bukayo Saka.

It was an eye-catching performance from the 29-year-old, who has had to bide his time for a chance despite some solid displays in the Europa League, where he started five of Arsenal’s six group games.

"The most important thing is to go out there and to try our best to support the team. I want to play as much as possible to help my team-mates reach more and more points. This is the focus.”

The lack of game time for Cedric this season has been surprising given the level of his performances when he has been given a chance to impress in the cup competitions.

Arteta’s support for vice-captain Bellerin has been unwavering, even though the Spain international has struggled at times as he continues to try and get back to the sort of form he showed before he ruptured the cruciate ligament in his left knee last January.

Prior to Monday’s game against Newcastle, Bellerin had started all but two of Arsenal’s 19 Premier League games since the start of the campaign.

The two he did have to sit out - against Southampton and Everton in December - saw Arteta turn to Ainsley Maitland-Niles, with Cedric again left on the bench. 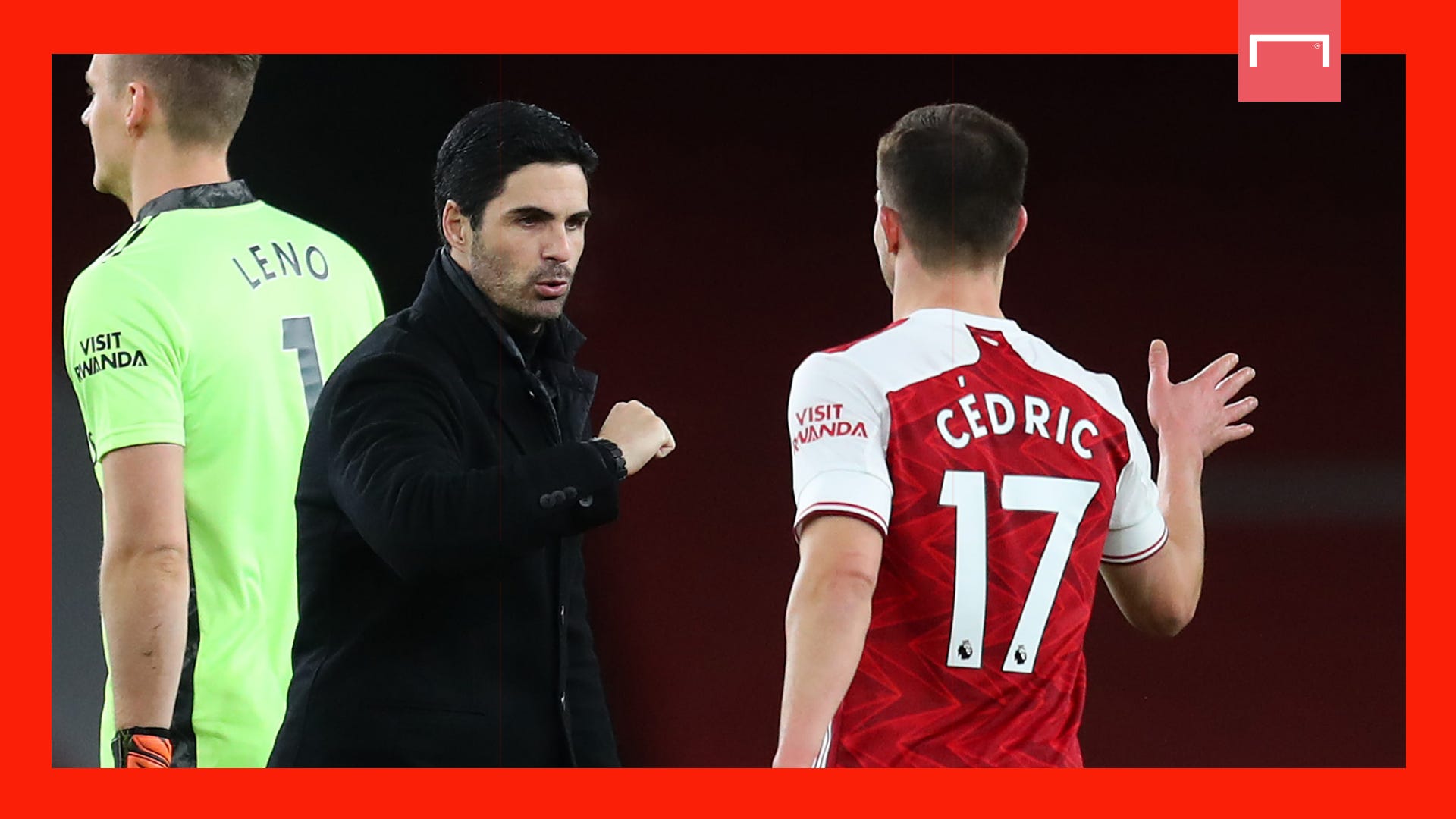 Given Arsenal had handed the defender, who won the European Championships with Portugal in 2016, a lucrative four-year contract only a matter of months earlier, it seemed an odd call to make.

What was the point of signing Cedric if you were not going to use him even when Bellerin was unavailable?

The consensus among some fans has long been that the former defender was only signed because of his agent, Kia Joorabchian, a man who is viewed as having a strong influence at the club when it comes to transfer business.

The fact that the defender was injured when he signed on loan and was handed a long-term deal five months later without even having played a game for the club only enforced that view.

But Cedric has shown this season he can be a useful asset, and his performance against Newcastle was testament of what he can do if called upon.

“I’ve seen a big change in Cedric in the last month or so,” Arteta said in November. “I think his performances in the Europa League have been much better.

"He needed some time to adapt to our way of playing and most importantly, he needed his fitness levels to be at the standard we need.

“He’s accepting the situation and he’s fighting against it to prove us wrong and we’ll try to provide him more opportunities.”

Those opportunities have proved difficult to come by, however, especially in the Premier League

Arteta has shuffled his pack plenty of times during the past few months to keep his squad fresh, but Bellerin has felt untouchable.

And given some of his underwhelming performances this season, that had always been quite surprising, with Cedric's statistics when compared to the Spaniard certainly suggesting he should be getting more chances to impress.

In his 12 appearances across all competitions this season, Cedric has totalled 873 minutes from nine starts. Bellerin meanwhile has amassed 1,464 from 17 starts, although it must be noted that the vast majority of the latter’s minutes have come in the Premier League against superior opposition. 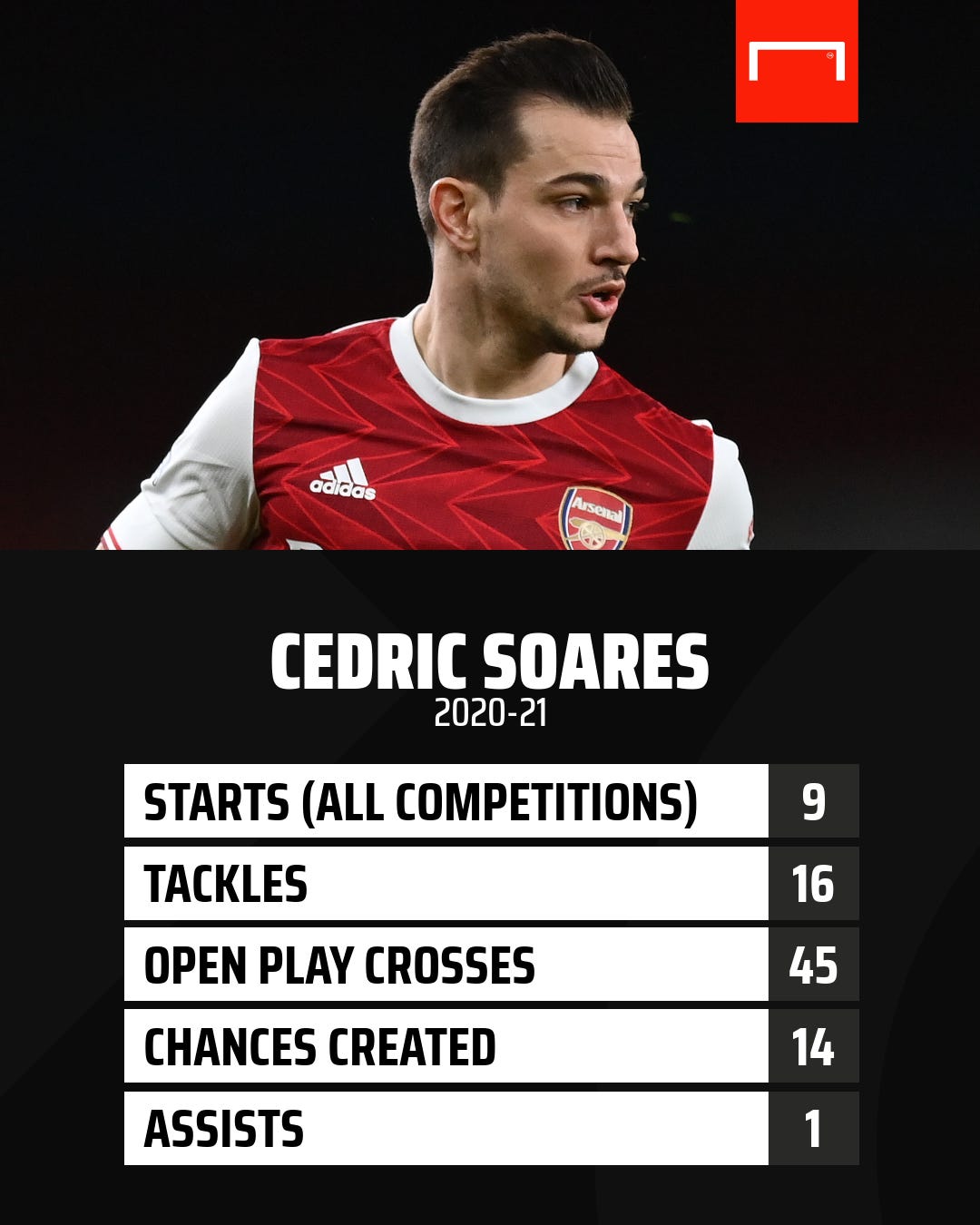 During Cedric's lack of appearances, he averages 1.7 tackles per 90 minutes, 4.6 open play crosses, 1.4 chances created and 0.6 shots. He ranks higher than Bellerin in all those areas, yet has barely had a look in whenever the Premier League rolls around.

Despite being frustrated by his lack of game time since joining Arsenal, Cedric remains determined to make the move work and is hoping his performances when called upon will lead to more opportunities over the second half of the campaign.

“I am paid to play so of course I want to be part of it in every game,” he said. “This is what I am training for, this is what I try to do when I have the chance, I feel good, I am in a good moment, I am confident.

“So when I have the opportunity I need to make the best out of it every time and this is how I think.

“When I came here to Arsenal, I had a few injuries and didn’t play straight away but since then I have been giving 100 per cent every training session, every game I have played.

“When I have opportunities one thing is for sure, I will give 100%. I grew up like this, I have to fight for everything I get.

“When the coach wants to use me, I am here, I am ready for the team and to support my team-mates as well.”

Behind the scenes, Cedric is known as a player who works and behaves impeccably, someone who does not kick up a fuss and who always conducts himself in a professional manner at the training ground.

So far that has not been enough to earn him a regular spot in the Arsenal side, but he will be hoping his performance against Newcastle proved he is good enough to at least put some pressure on Bellerin for the right-back spot as the Gunners head into back-to-back fixtures against Cedric's former club, Southampton.

It has taken nearly a year, but Arsenal’s forgotten man may just be about to emerge from the shadows.