The teenager marked his return after 10 months out with a goal against Levante, hinting that he still has what it takes to be Lionel Messi's true heir

From the humiliation of playing route one football with centre-back Gerard Pique up front alongside target-man Luuk de Jong at home against Granada, to toothless passing in a soporific goalless draw at minnows Cadiz, it had been a dark week for Barcelona.

But on Sunday, a ray of sunshine broke though the clouds and illuminated Camp Nou.

Barca were well on their way to beating Levante before Ansu Fati was introduced off the bench, but the teenager's arrival may well mark a turning point for the club in terms of results, performances and, even more importantly, emotionally.

NXGN 2021  winner Fati was only on the pitch for 10 minutes, but it was enough to whip Camp Nou into a frenzy. Despite the stadium only being a third full because of Covid restrictions, when Ansu scored the third in the 3-0 win, it exploded.

It has not been louder since the hallowed 6-1 'remontada' against Paris Saint-Germain in 2017.

This was a comeback of another kind. After 323 days out and four knee operations, Barcelona’s great hope finally made his return with Lionel Messi’s vacated No.10 shirt on his back.

Carried on Ronald Araujo’s shoulders, raised above his team-mates, the Lion King symbolism was hard to avoid. The king is dead, long live the king.

That is how Ansu spoke, too, after the game, with hundreds of fans still there, waiting, calling his name. “We are Barca,” he said. “We will go for La Liga, for the Champions League and all the competitions we are in.

"All teams want to win it all, but we are Barca, we have to battle, to fight for it.” 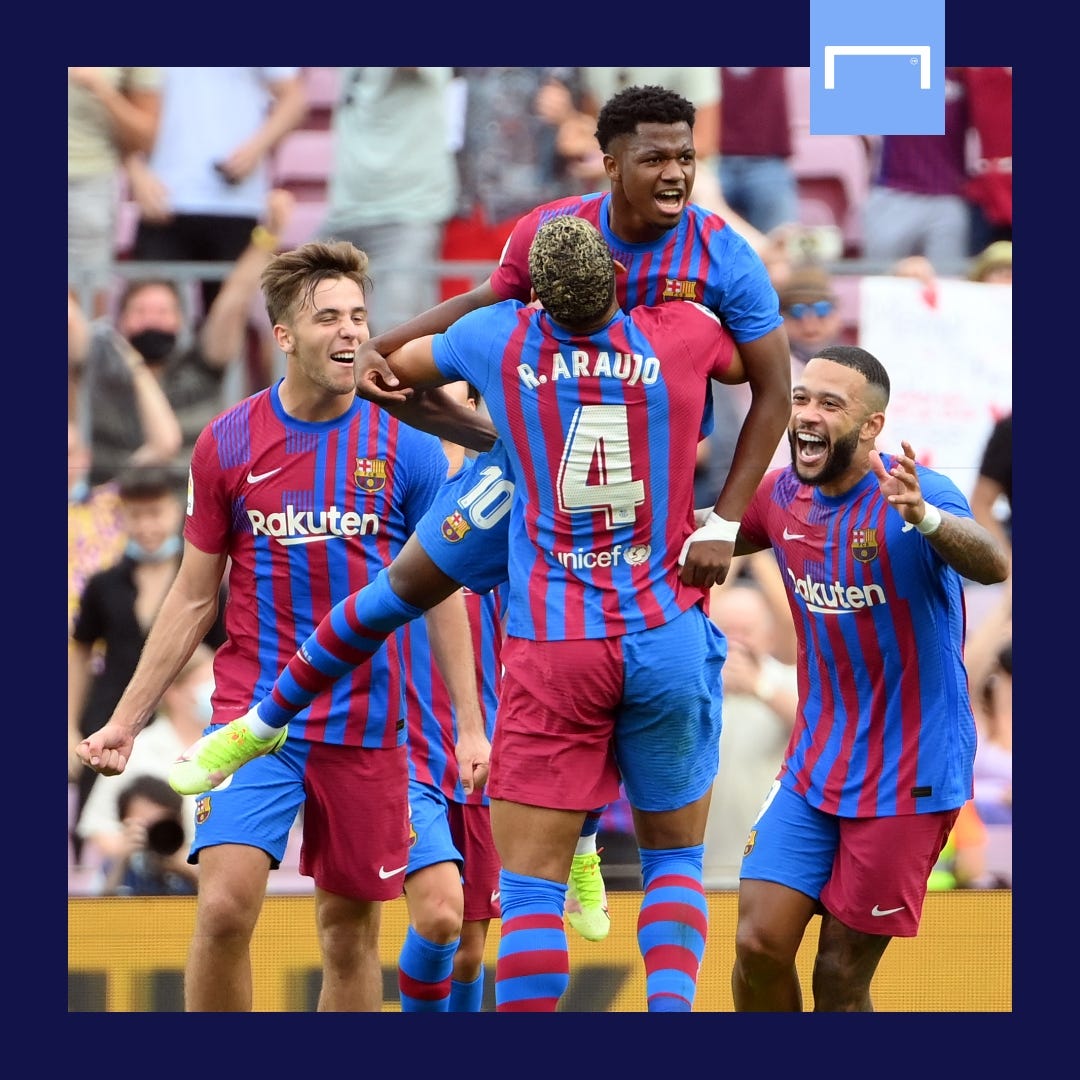 It was a far cry from the defeatism - or realism, depending on your point of view - of coach Ronald Koeman a few days earlier. “To finish high in the league table would be a success,” the coach read out in a bizarre statement, in lieu of his press conference before the Cadiz game.

“In the Champions League, no miracles can be expected.”

Even Pique, a club icon and often spokesperson, had been stony-faced a few days before. “It is what it is,” he acknowledged. “We are who we are.”

But now they are a Barcelona with Ansu Fati.

And why shouldn’t the 18-year-old believe in miracles? At 16 years and 304 days, he became Barcelona’s youngest-ever goalscorer, netting against Osasuna in August 2019.

Ansu was walking on air after scoring on his return, a fearless cameo, not cowed by his injury troubles; balletic, electric, and immediately a nightmare for opposition defences.

With Barcelona two goals to the good through double Dutch connection Memphis Depay and Luuk de Jong, much of the second half became a waiting game for when Ansu would be summoned.

There was a roar from the stadium when he stood to warm-up, and a bigger one still when he stripped down to his shirt, beaming from ear to ear. All people wanted was to see him back on the pitch, but he gave them a lot more.

Jinking one way, then the other, he left Jorge Miramon twisted up, then was felled in the area by Pablo Martinez, which should have been a penalty. No matter; in the 91st minute, he scored.

Perhaps Ansu should have released the ball left for Riqui Puig, but he held on to it, somehow knowing this was his moment. He has that knack and may prove to be the clinical finisher Barcelona lack. An early, low shot caught out the otherwise excellent Aitor Fernandez, and Camp Nou exploded with joy.

Ansu ran to the stands, where he embraced the club doctor and physio, then went to his family, who were already in tears. It was a truly great moment, not just for Barca but also for Spanish football.

He is the type of player that the national team also badly needs, and the league too, after Messi, Sergio Ramos, Raphael Varane and others departed. A new star. Even Real Betis, the opponents Ansu suffered his knee injury against last season, tweeted their joy at seeing him back on the pitch.

Barcelona’s hope is not just that Ansu is a star in his own right, but that he is the leader of the next generation. And for the first time since the Xavi, Andres Iniesta, Pique, Messi and Carles Puyol heyday, it does feel like there is a group of La Masia players who can go on to star for the club for years.

Nine players from the club’s academy featured in the game against Levante, with perhaps the best player on the pitch 17-year-old midfielder Gavi. The Ansu whirlwind meant Gavi's performance has gone under the radar, but it was a superlative display. Along with Nico Gonzalez and veteran Sergio Busquets, the Catalan trio dominated the midfield.

Ansu’s return and the green shoots of youth excelling have changed the club’s dynamic ahead of a huge week - and a huge month.

After the home defeat by Bayern Munich in their Champions League opener, Wednesday’s trip to Benfica has taken on great importance, before Barcelona travel to face last year’s La Liga winners Atletico Madrid on Saturday. The Clasico is approaching fast after the international break, too.

Ansu’s return is a shot in the arm, for his skill, speed and killer touch, but also to raise spirits and drag Barcelona out of what seemed a deep depression.