Roma's Brazilian goalkeeper has long been linked with a move to Anfield, with his representative now hinting that he would be in favour of a switch

Alisson could be heading to Liverpool after all, with the Roma goalkeeper’s agent having fanned the transfer flames with his activity on social media.

A move to Anfield for the Brazil international has been mooted for some time.

With Simon Mignolet and Loris Karius having struggled to convince between the posts for the Reds, Jurgen Klopp has been heavily linked with a number of alternatives.

Alisson was considered to top Liverpool’s wish list, with talk of potential big-money bids doing the rounds before and during the 25-year-old’s involvement at World Cup 2018.

The speculation had started to die down of late, with Goal revealing that Klopp is prepared to offer Wales international Danny Ward a shot at being the first name on his team sheet.

The rumour mill has, however, kicked back in following reports in Italy that Alisson’s representatives are to meet with Roma on Tuesday.

It may be that interest from Liverpool is up for discussion, with Ze Maria Neis having hinted that the Reds are still keen on his client.

The Brazilian, who manages Alisson as part of his Neis World Sports agency, has liked a post on Instagram which shows the highly-rated keeper trading Roma for Liverpool. 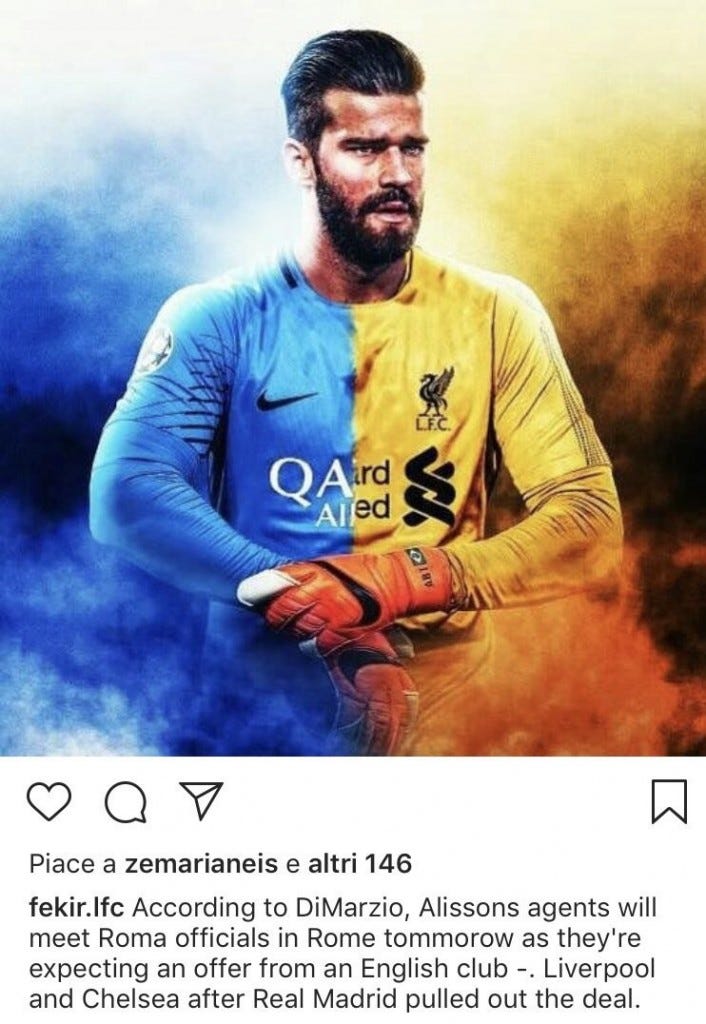 While a move may well be in the pipeline, Roma have maintained throughout the regular rounds of rumours that they will not be lowering their demands for a prized asset.

They hope that a scramble between heavyweight outfits could be sparked once one official bid is tabled, with the likes of Real Madrid and Chelsea also said to be in the hunt for Alisson’s signature.