Having recently celebrated their third birthday by having a permanent banner placed inside Old Trafford, the LGBTQ+ fan group are making real strides

Over the years, Manchester United fan Eric Njab has enjoyed many memorable occasions at Old Trafford.

But his proudest moment at the Theatre of Dreams did not come when the stadium was full to the rafters with other supporters.

Instead it was in November 2021, when he and a couple of fellow fans were invited to unveil the official Rainbow Devils banner in the Stretford End.

Rainbow Devils celebrated their third anniversary earlier this month, but many were not aware of their status as Manchester United’s official LGTBQ+ supporters club until their rainbow banner appeared inside the ground.

A great night for United - the full OT debut of the RD banner! Oh and the small matter of a much welcome 3-2 victory vs Arsenal! We also want to say a massive thank you to @carras16 for 15 years of outstanding service to the club! Good luck Michael - see you in the away end soon! pic.twitter.com/LQObRYErE4

It was the first of what the group are hoping is a long-line of initiatives with United to improve inclusivity and make football a safe space for everyone.

Njab himself has always had quite a positive experience at games, but other members of the group have not been so fortunate.

“We’re making baby steps when it comes to progress, we’re definitely not going backwards,” he explains. “But there’s still a lot to do as a group.

"We’re not just here to meet up and have a beer and a pizza before a game and talk about whether [Edinson] Cavani or [Cristiano] Ronaldo should start.

“We want people to be coming to us if they have an experience that needs reporting. We can’t have people who feel threatened or in a minority that feel they can’t go to football games, and we are seeing issues where that’s still the case.”

Despite the new banner, It is no secret that United were slower than other clubs in having their first official LGBTQ+ supporters club, though Njab insists the club have been nothing but positive in backing the Rainbow Devils.

New United CEO Richard Arnold is a staunch supporter of the group, and there are continual discussions about next steps to increase visibility and promote inclusivity. 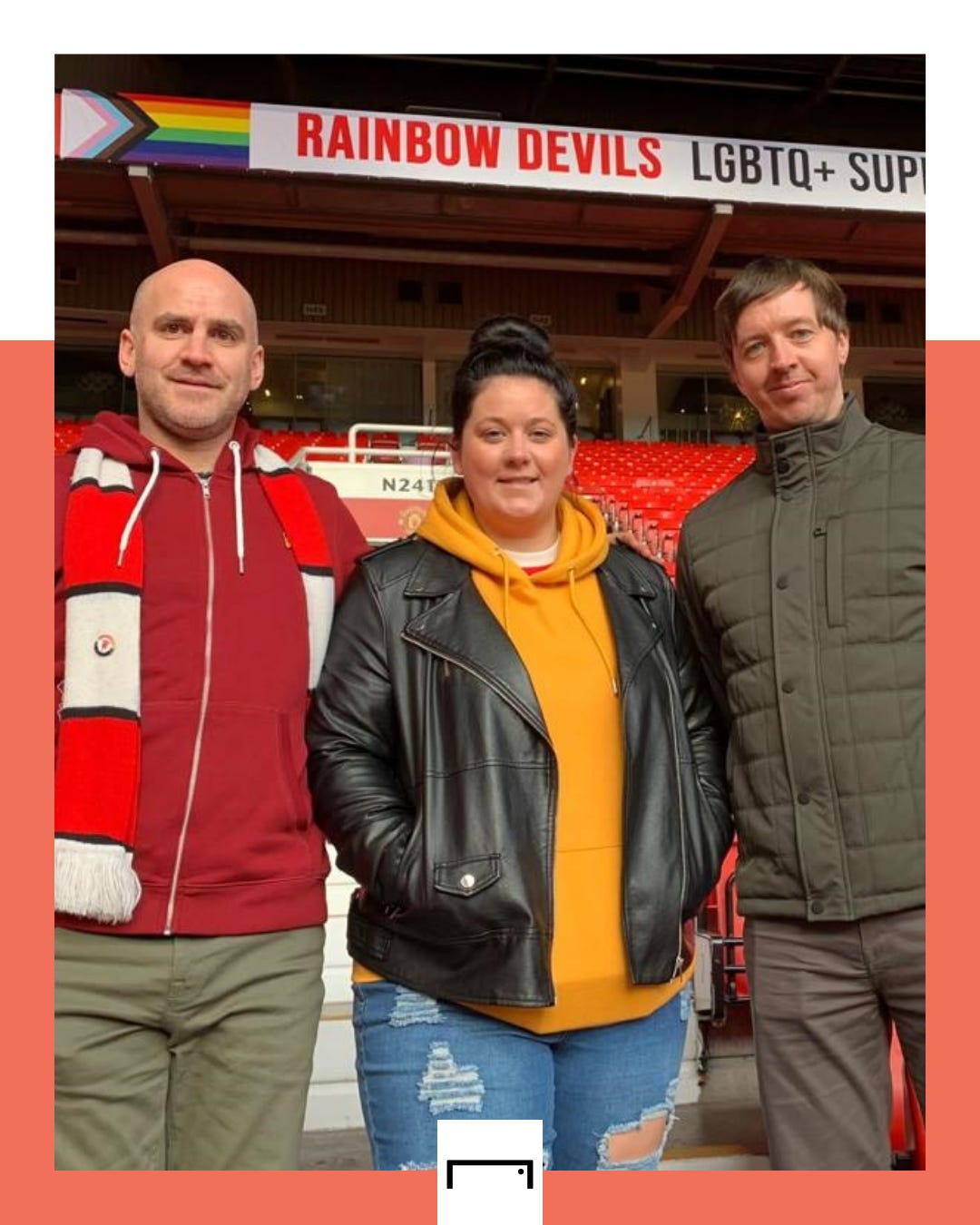 But what the group would like to see next is United to follow the lead set by some of their biggest rivals.

Liverpool, Manchester City and Leicester City are just three clubs who have been vocal allies of their LGBTQ+ groups, and Njab thinks that a similar gesture would have a huge impact on the Rainbow Devils.

“We’re conscious of the fact that Manchester City do a lot of things right in this department and we’re working very closely with the club to make sure we have the same sort of traction that Man City get,” he says.

“We are very much looking forward to debuting at Pride this summer, all being well with Covid.”

The group would also like to see a high-profile player become a visible ally. Njab believes that gay players feeling they have more allies within the game may encourage the first Premier League professional to come out.

“I certainly think groups like ours will have an influence, but I also think the players themselves will" Njab says. "I have to give credit to players at other clubs who have put themselves out there to become champions and allies of anti-homophobia and acceptance of LGBTQ+ in football.

“Leicester City have James Maddison, who is a superb ally and has spoken with their group a lot. Jordan Henderson might be an arch rival but he speaks so well on the subject, it is something where you have to put rivalry aside.

"Footballers will look to their peers rather than the fan groups, but it will all be part of the diagram. The footballers will make a big difference.”

Happy @ManchesterPride from all of the team @RainbowDevils Proud to be part of this great city and community. All Reds are Equal. All humans are equal. 🏳️‍🌈🏳️‍⚧️❤️ pic.twitter.com/FN1EgeKeh8

It’s not just the players who can make a difference, though, and Njab believes groups such as Rainbow Devils, along with support from the club, can educate people into changing their behaviour.

Take the 'Chelsea rent boy' chant, for example. Away fans, including those travelling to support United, have been guilty of singing it over the years when facing the Stamford Bridge outfit.

In January the Crown Prosecution Service - the main public agency for prosecuting crimes in England and Wales - announced the chant is a hate crime, meaning people can be prosecuted for singing it.

But Njab thinks it is not just about telling people not to do things; they need to understand why it is wrong.

“Education is huge, it’s the biggest tool in challenging stereotypes,” he says. “I think some people will sing any song without actually understanding it. They see everyone else singing it and think they will join in.

“The history of that particular song and also the implication and everything of it, I think, is being explained as to why it’s offensive. Whether we like it or not, there’s a loud minority of people in society that if they’re asked to do something, they will immediately not do that. This ridiculous mentality that they can’t be told what to do.

“I don’t want football to be totally sanitised. I don't think anyone wants that and I think that things like safe standing and things like that are there to ensure that football retains its unique selling point in terms of the atmosphere it can create but, it has to be policed.”