Some of these are a cut above the home and away kits this season...

Third kits are somewhat overshadowed by home and away kits throughout the season, but they're hard to ignore when the designs get more extravagant and cooler. In recent years we've seen the resurgence of iconic vintage designs, to some brand-new bold looks which pay homage to clubs' cultures and traditions.

While third kits might not make the headlines, you don't want to miss out on some of these incredible releases for the 2022-23 season. Here are the best third-kit football shirts revealed so far this season. 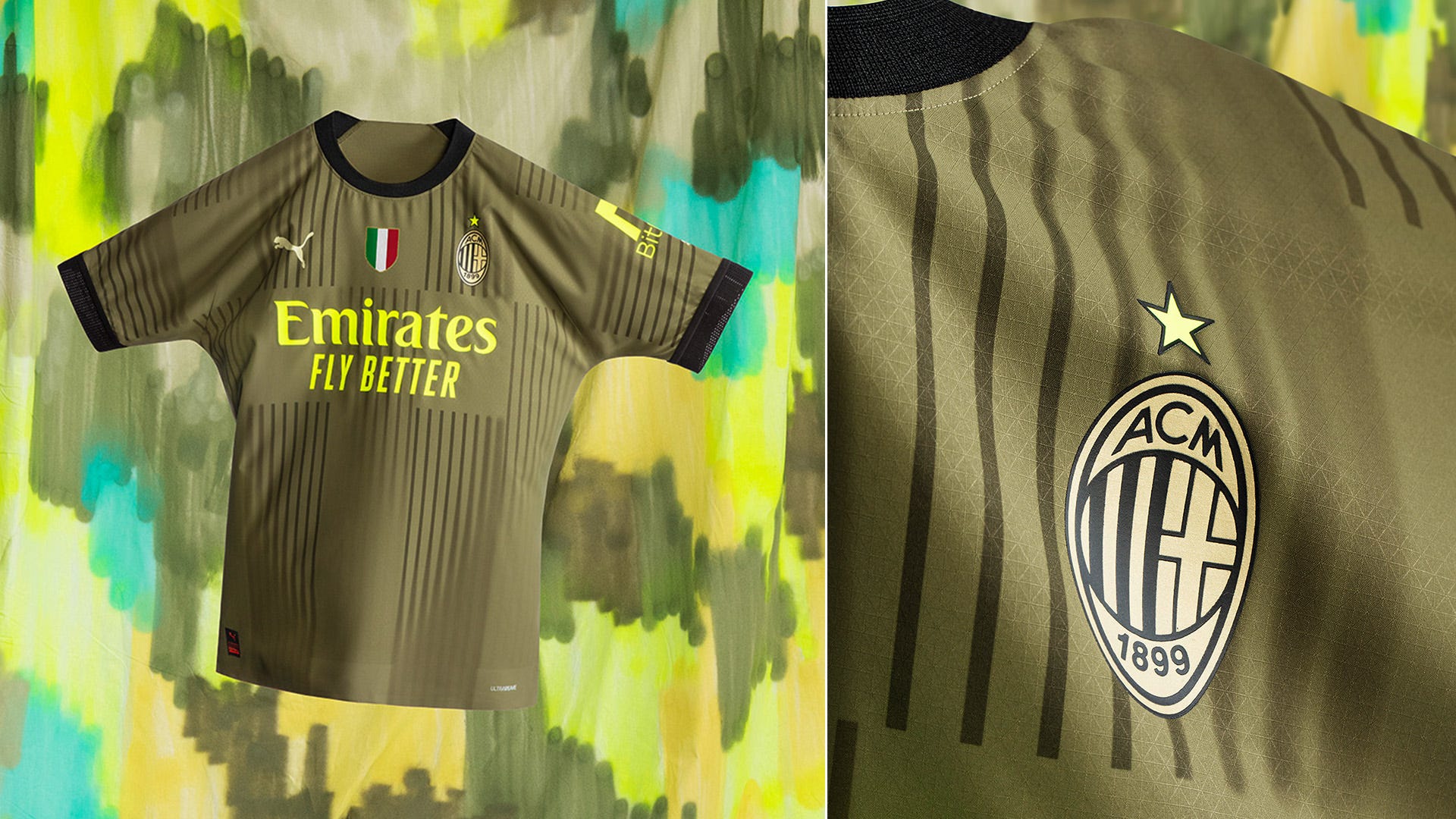 Serie A Champions AC Milan go three for three with their 2022-23 season kits, completing their collection of jerseys with a third kit that captures the signature Milan touch in a brilliant olive green and is inspired by the cutting-edge fashion of the city. The unique olive green shirt features a tonal graphic of the St. Ambrose cross on the chest alongside a monochromatic version of the AC Milan club crest. 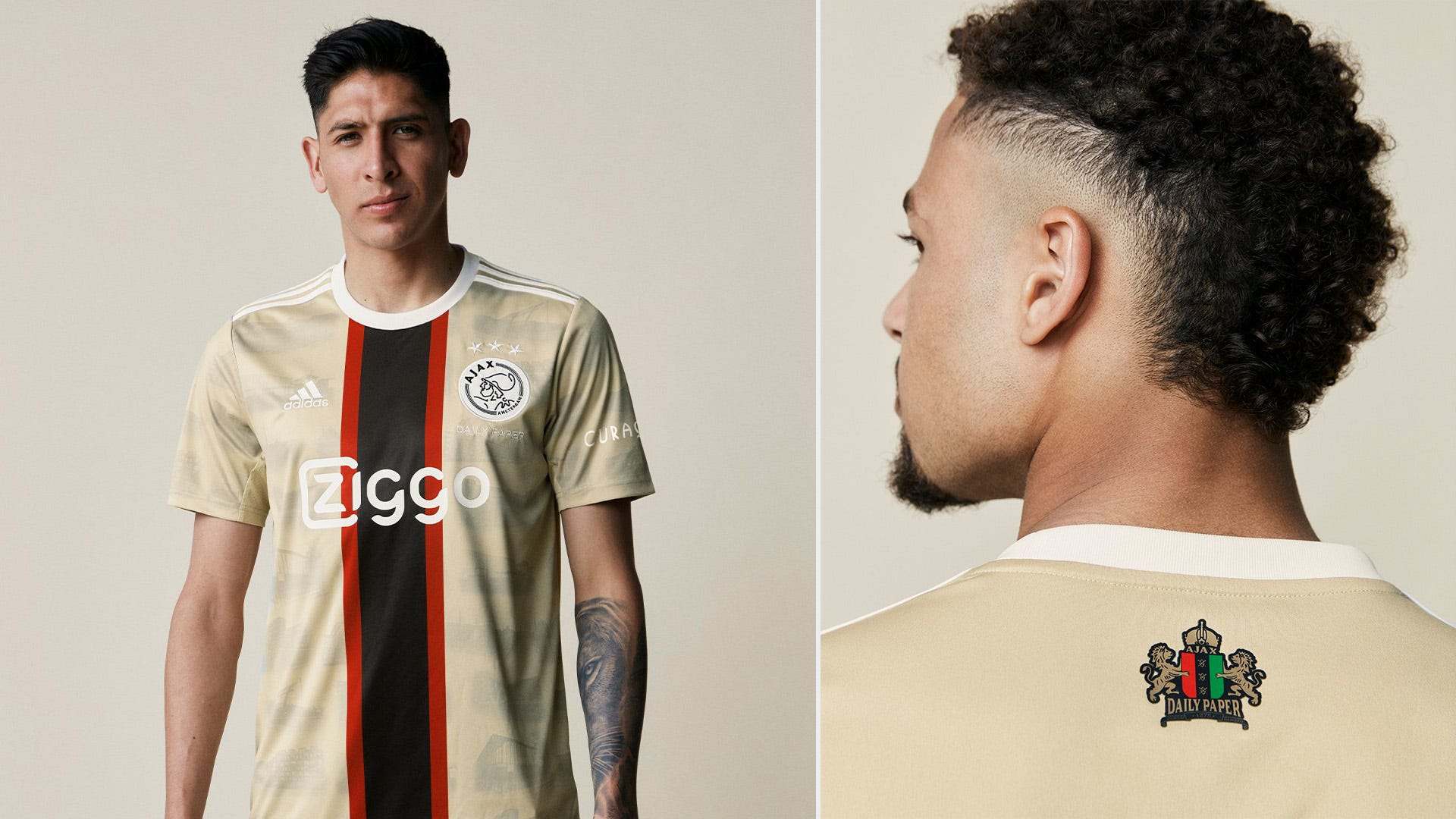 A sensational third jersey inspired by the city, adidas have teamed up with Amsterdam fashion brand Daily Paper to bring us this golden Ajax 2022-23 third kit. The shirt itself has an all-over golden base connected by a vertical stripe in the colours of the city's flag. Upon closer inspection, it's the stadium silhouettes that give the kit its own unique stamp. Nine of Amsterdam's most prominent street football courts feature on the jersey, subtly incorporated in smokey watermarks, paying homage to the unique street football culture of the city. 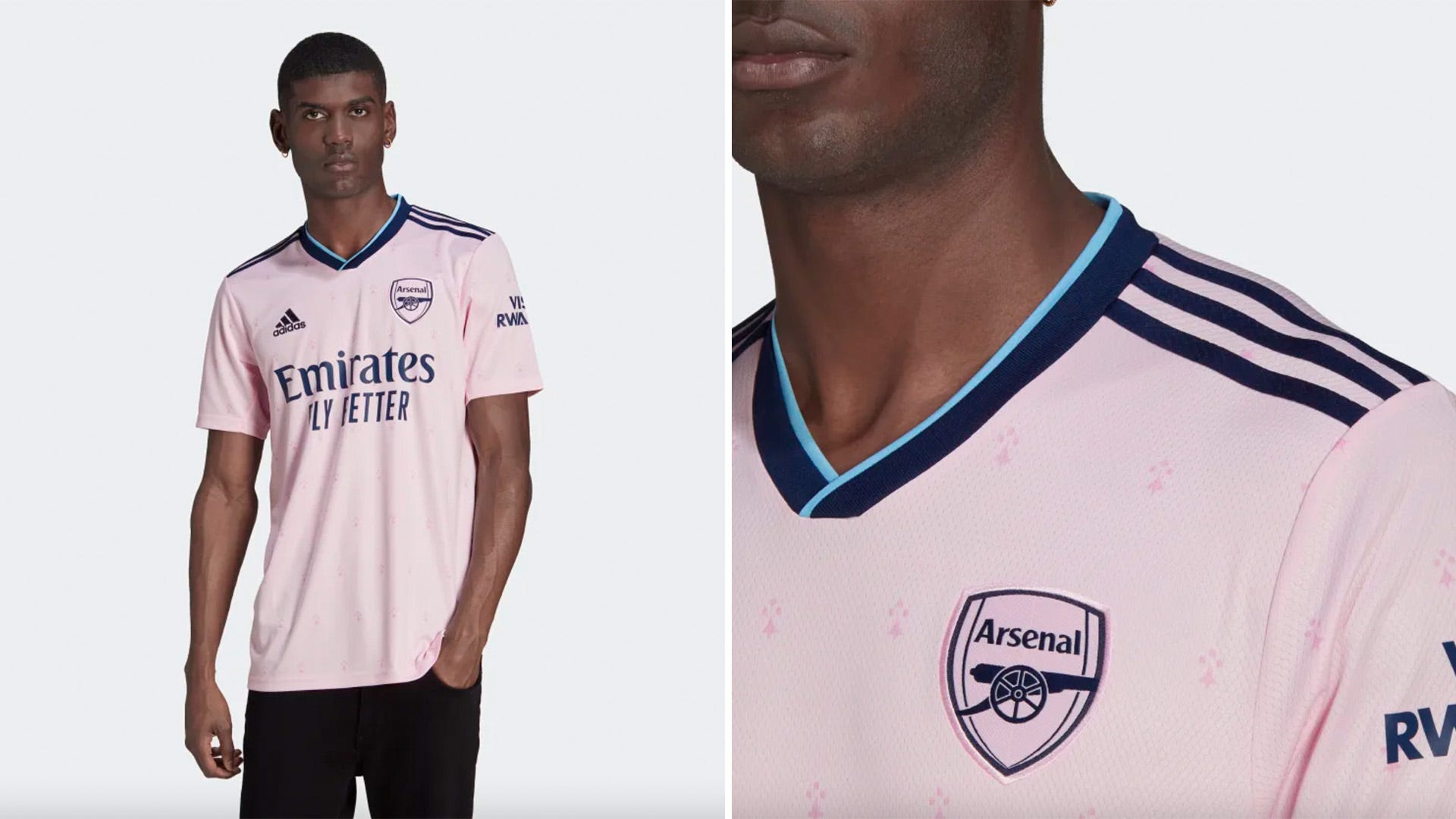 Adidas have loved designing a pink jersey over the last few years and Arsenal get their turn for their 2022-23 third kit. The pink jersey brings back the classic late 20th-century Arsenal crest, which sits on hues of wonderful light pink hues with dark blue accents. A pink kit done well in our books. Nike have finished off their trio of Barcelona 2022-23 season kits with a third jersey inspired by the Cross of Sant Jordi, on the club's 30th anniversary of the award presentation. Moving away from the usual stripes we see donned on the club's kits, the 2022-23 third kit focuses in on a large red and blue cross on the chest over an all-over grey base. 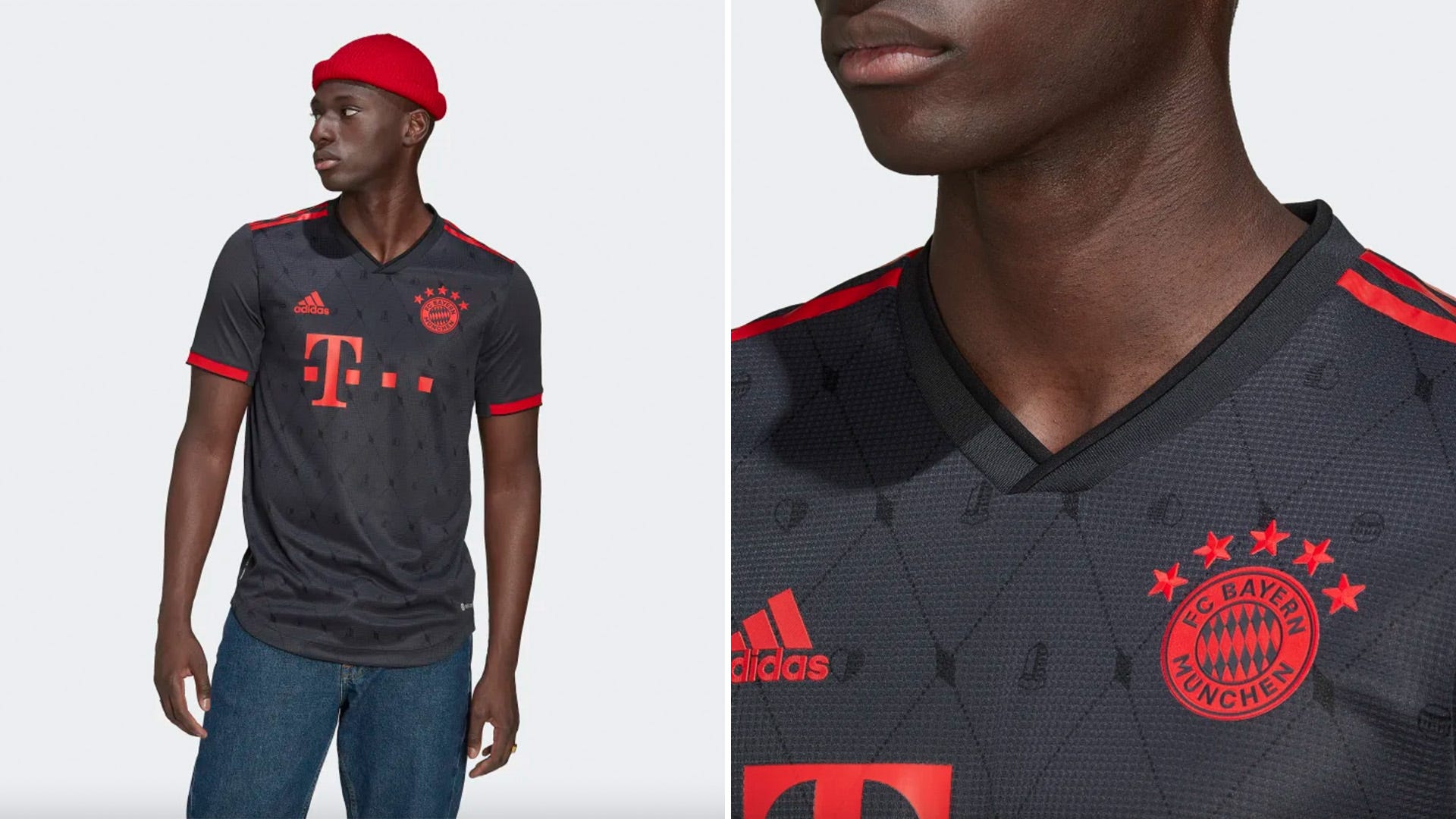 Bayern Munich's third kit is inspired by the traditional Bavarian card game 'Schafkopf', featuring the symbols of the card colours of acorn (club), grass (spade), heart, and bells (diamonds), which sit within rhombuses throughout the black and red shirt. Like the home shirt, the club's motto 'Mia San Mia' sits on the back of the neck. 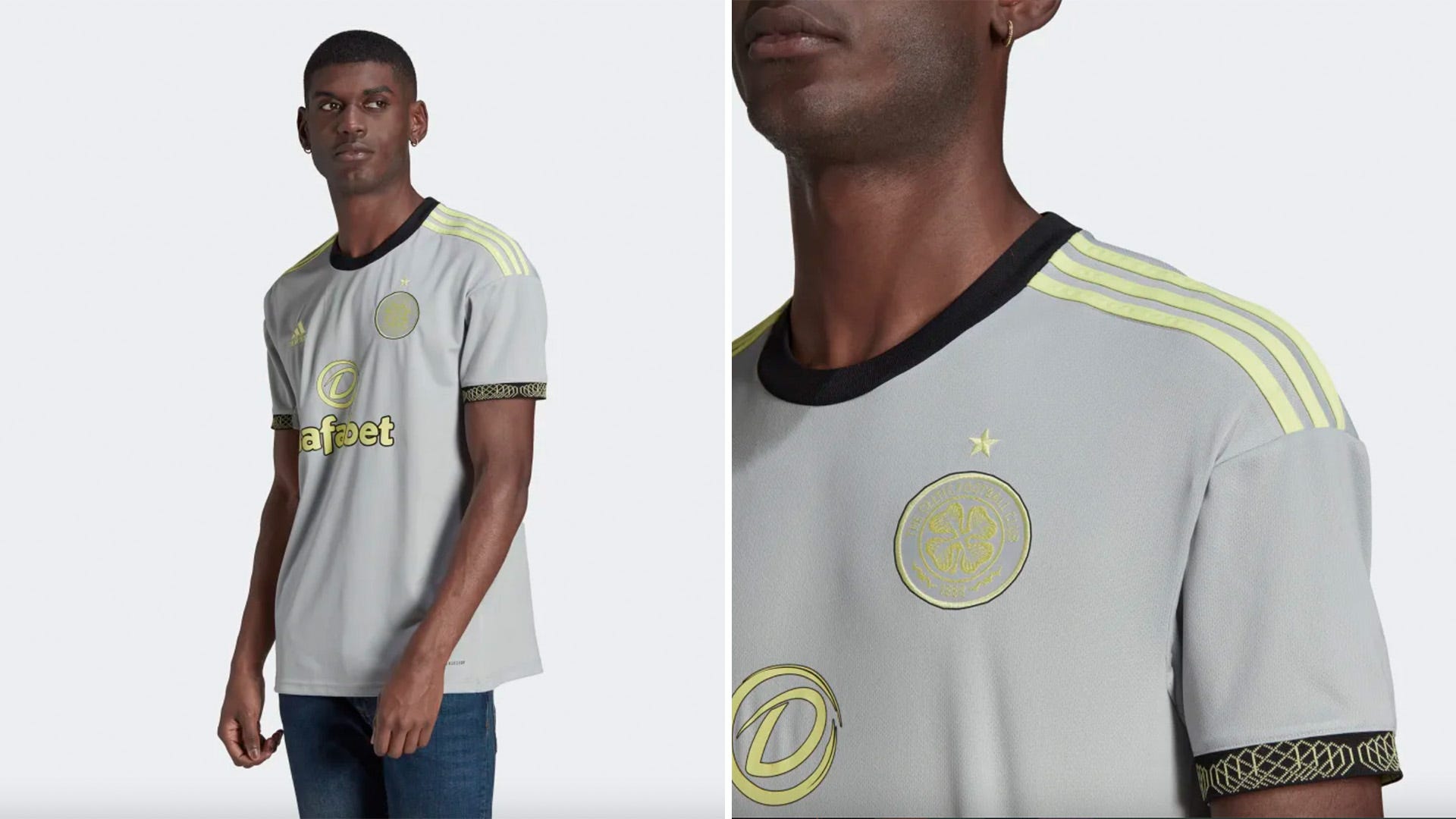 The Celtic third kit pays tribute to Celtic Park, which has been home to the club for over 130 years. Stanchion-inspired detailing on the sleeve cuffs and a yellow trim act as a reminder of the stadium's history. 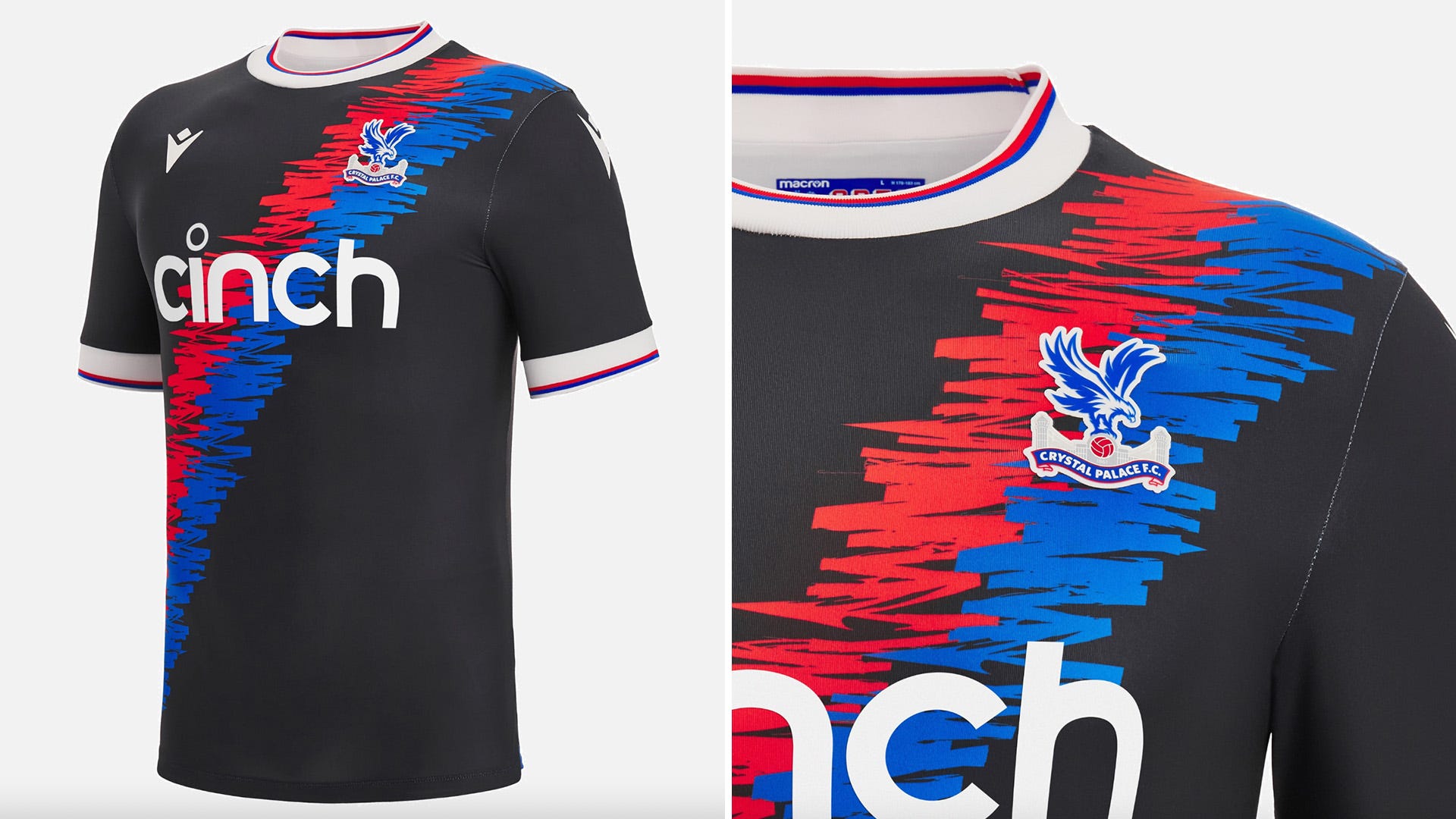 Macron has gone for an eye-catching number for the Crystal Palace third kit. It features a diagonal red and blue band in a brush pattern, which almost mimics a sash, worn across the shirt. The club colours sit on a black shirt with a white collar and sleeve cuffs. 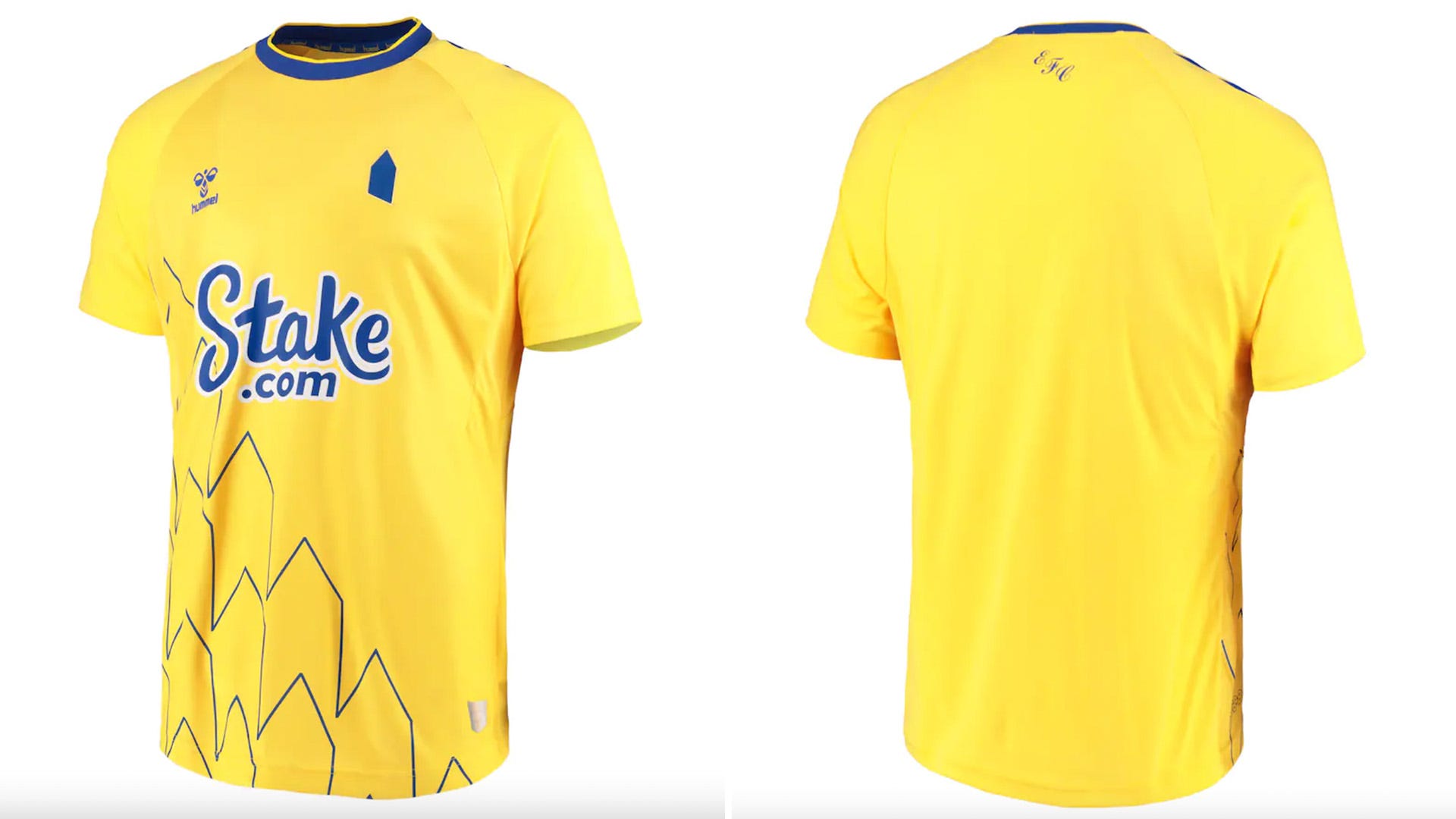 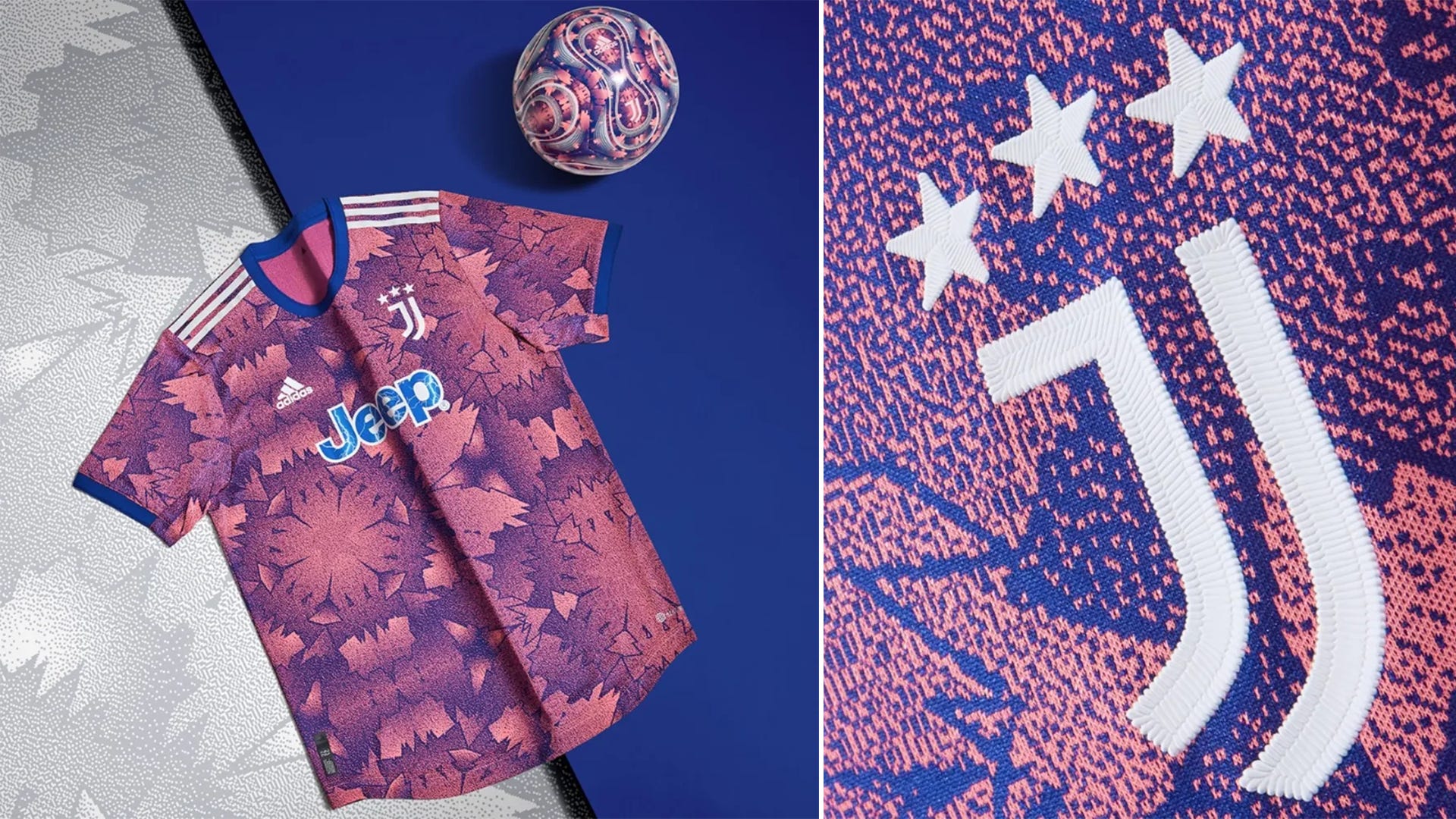 adidas and Juventus look back to the past for their 2022-23 third kit, bringing back two colours that have characterised their history, pink and blue. The stand-out shirt blends the two infamous colours to create a unique kaleidoscope pattern all over the base of the jersey, paired with matching blue accents on the collar and cuffs, finished with the classic white Three Stripes and logos. 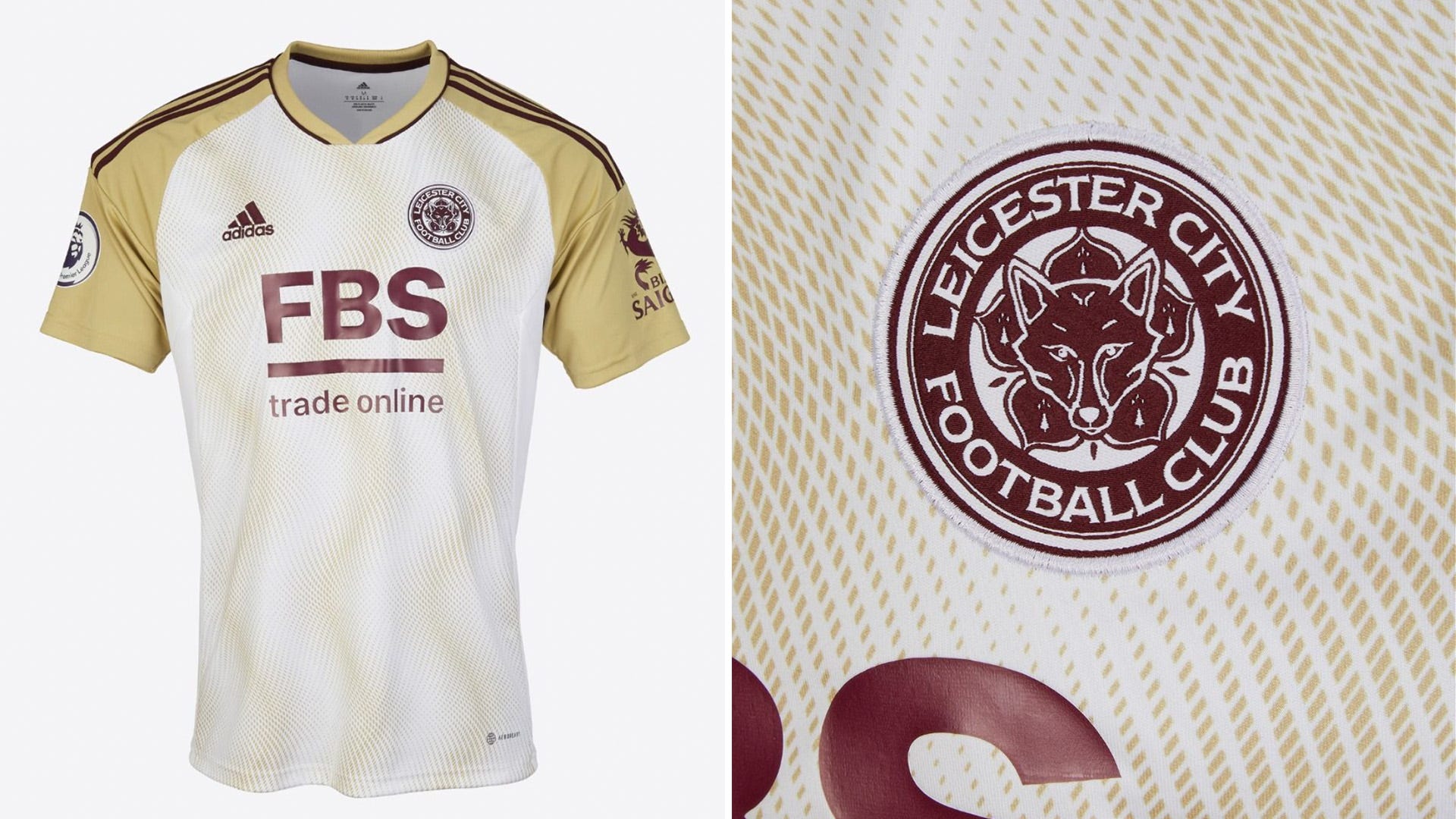 Leicester makes a statement with a third kit that features maroon detailing as a nod to the team that won the 2020-21 FA Cup. The shirt has two white panels on both sides with an all-over intricate net-like graphic in beige tones.

Get it from the Leicester City club store for £63.00 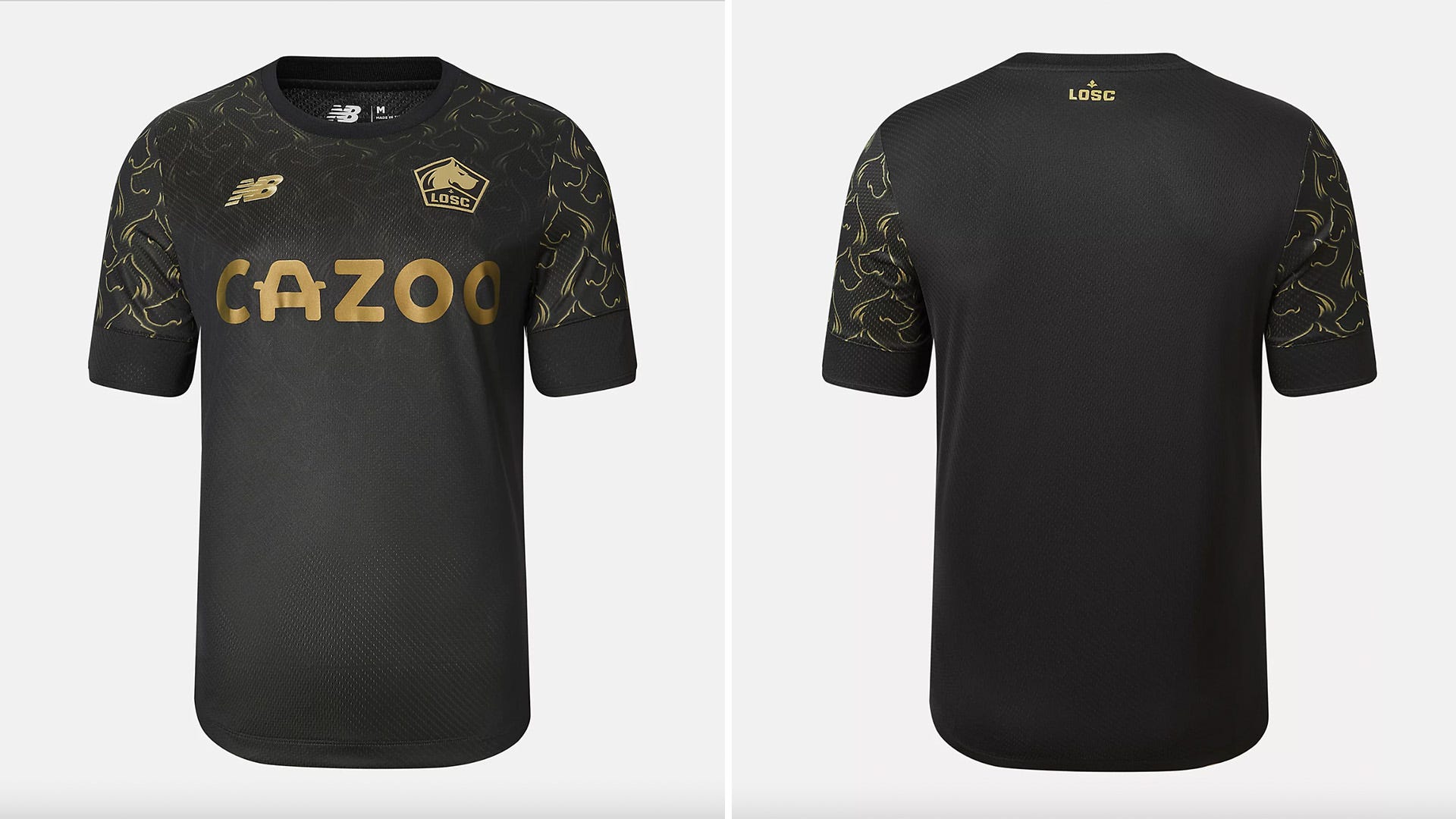 New Balance has created a sleek black and gold third kit for Ligue 1 side, Lille. The shirt's wow factor is a gold print that fades in from the top to the sleeves. The club crest and New Balance logos are also embroidered gold for a fashionable addition to the French team's jersey collection. 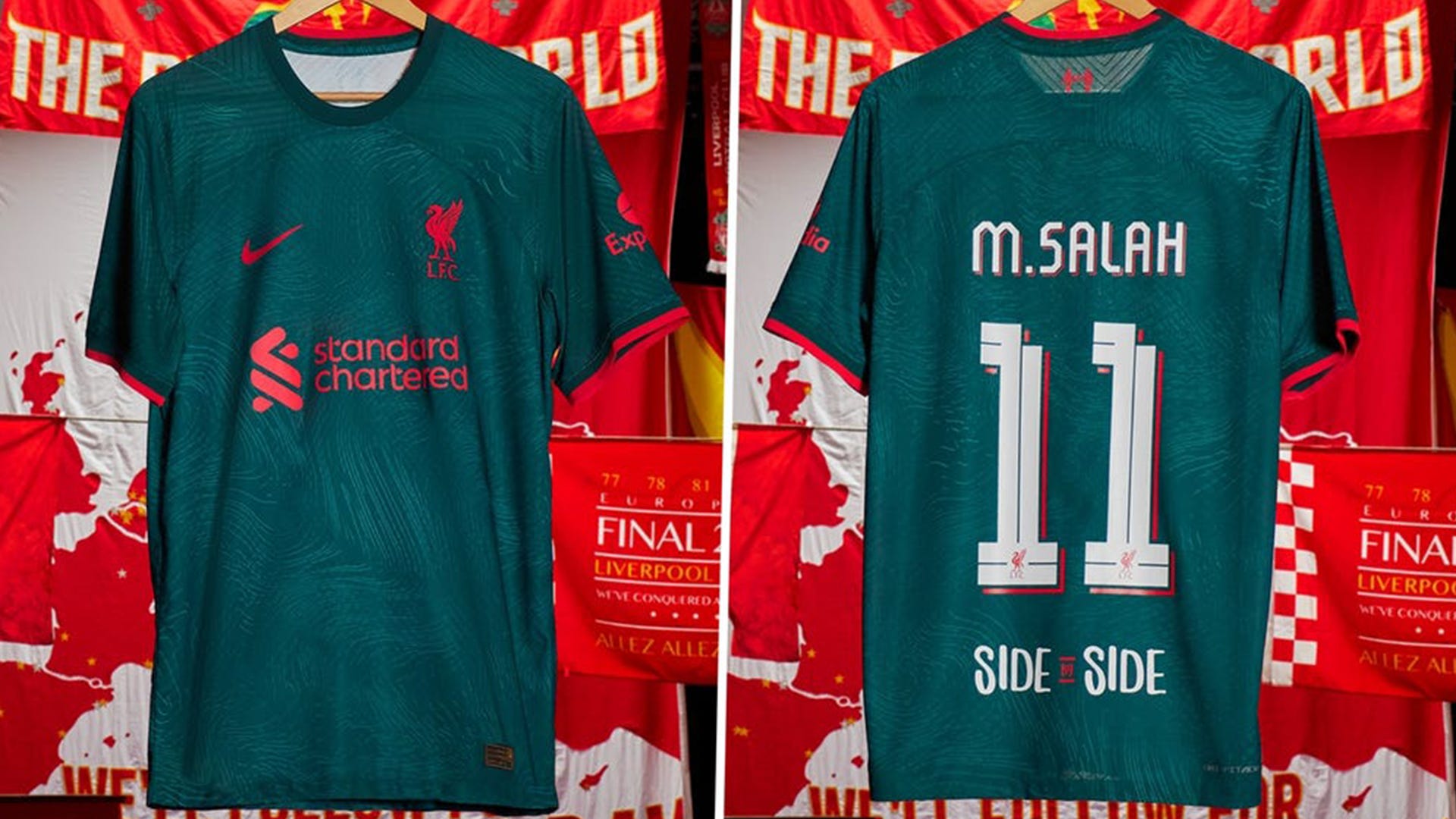 Liverpool completes their 2022-23 kit collection with a banner-inspired third kit. The Reds, who boast a rich history of success in European football celebrate the famous banners which often grace the Kop and travel with the club to away days in European competitions.

Get it from the Liverpool official store for £69.95 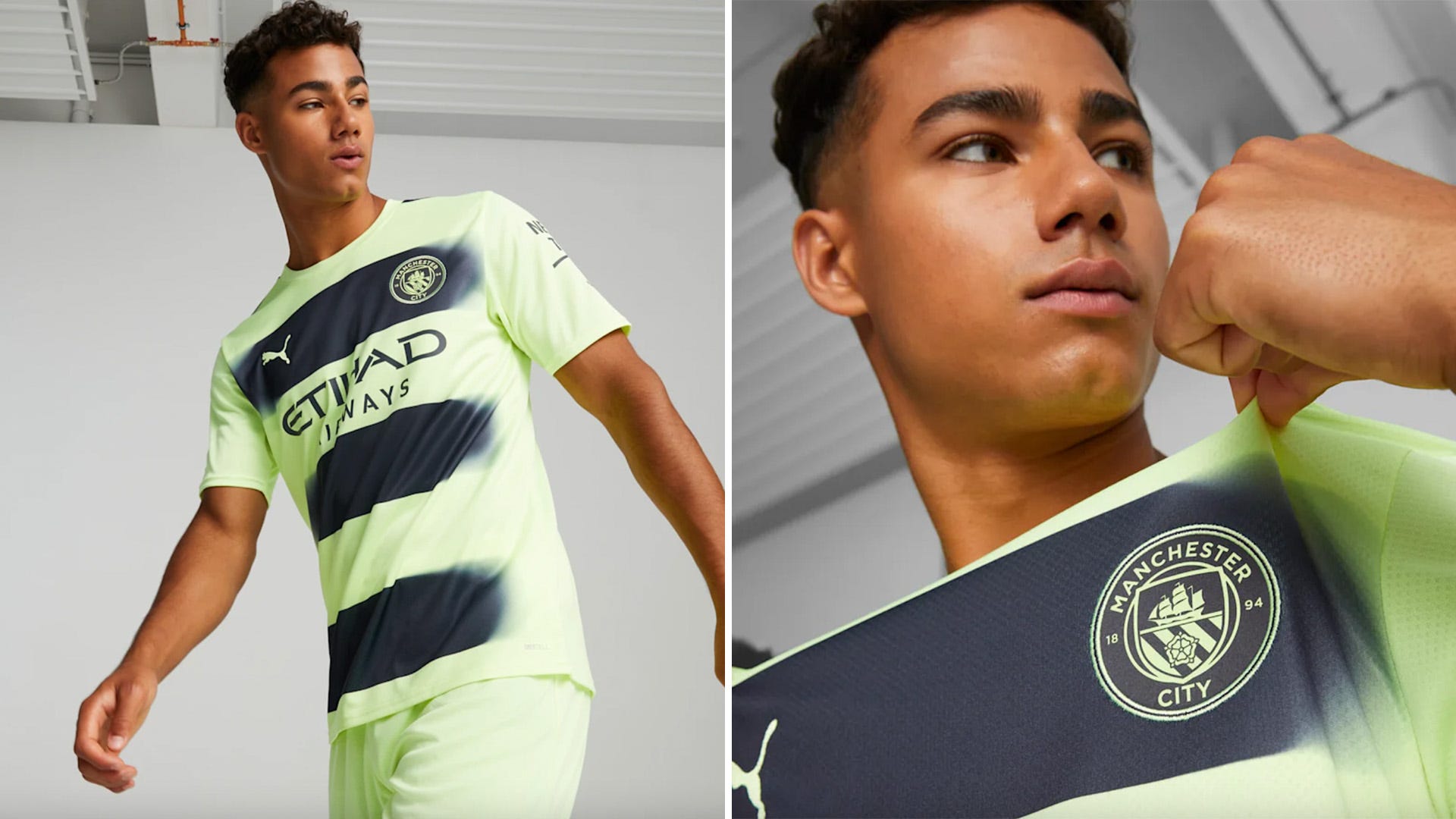 Paying homage to the Manchester worker bee, the Manchester City third kit features black hoops on a lime green shirt which blur at the edge as a symbol of the bee. PUMA launched the kit with the slogan' play forever', as the shirt pays homage to a different form of play associated with Manchester - street art. 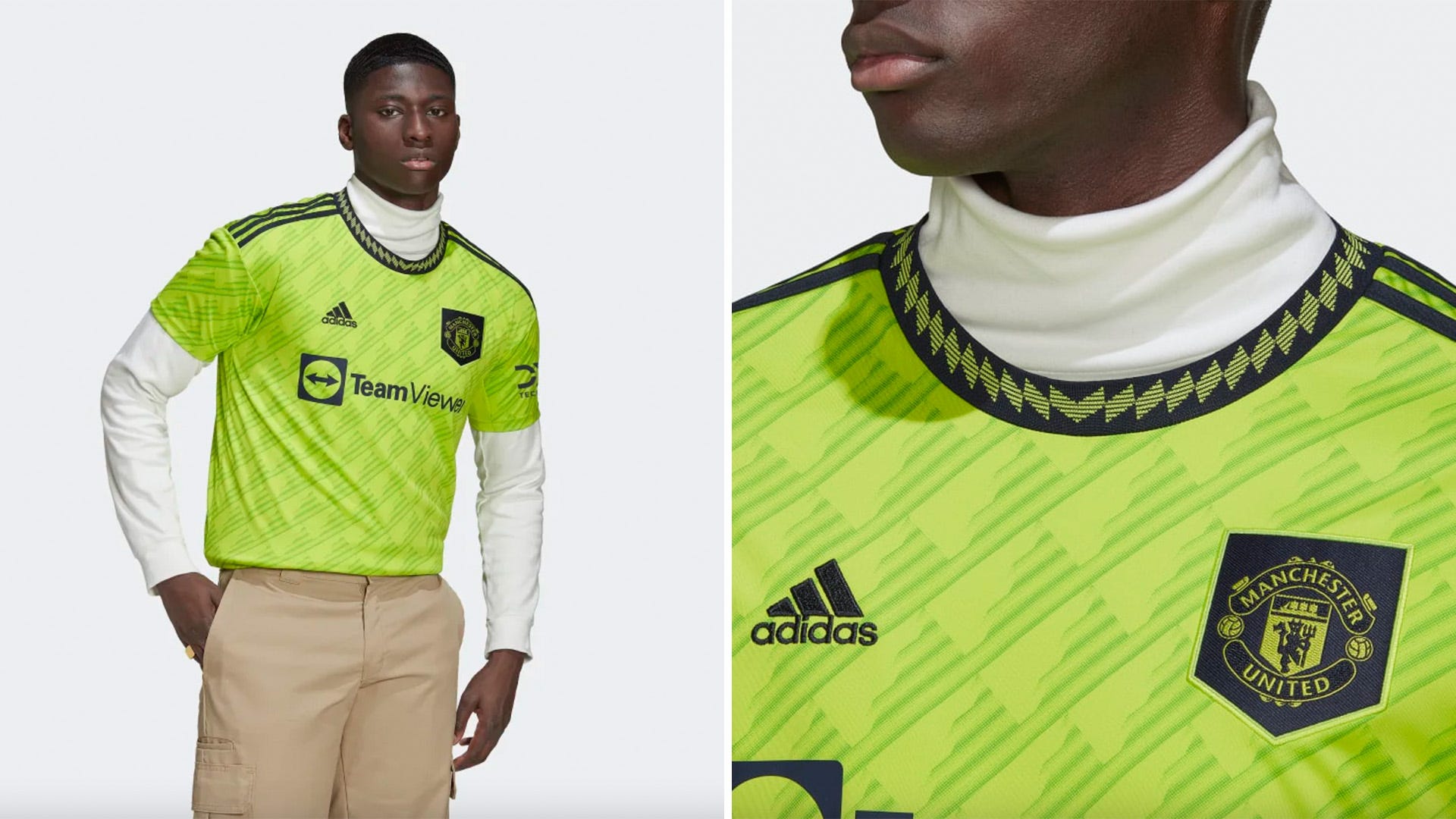 Never seen Manchester United don this shade of green before? That's because it's the first time in club history. Adidas has introduced a striking new interpretation of the classic club colour for an eye-catching all-over 'Solar Slime' jersey. It draws inspiration from the fashion culture of '90s Zeitgeist. 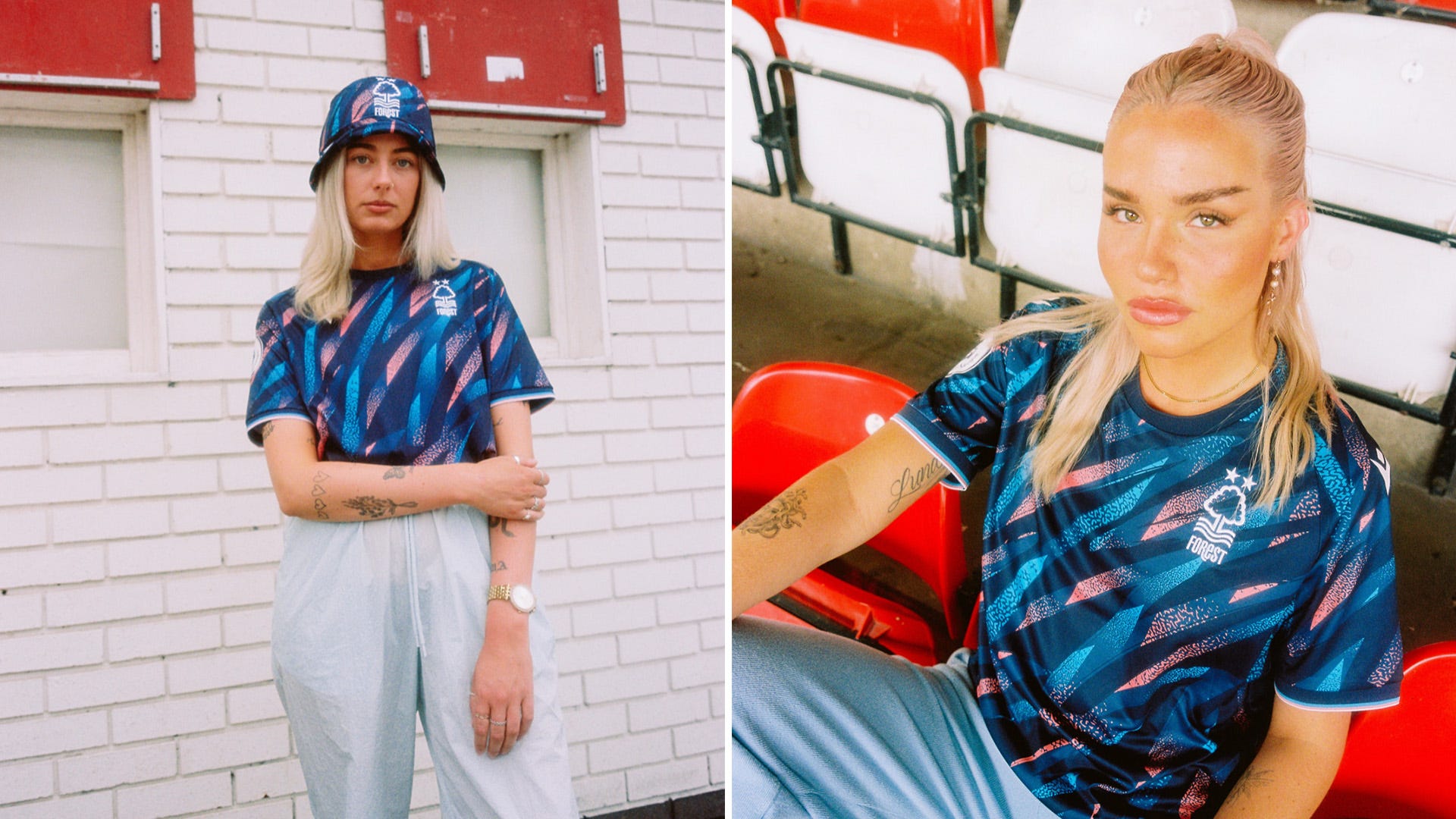 A repeated blue and coral pattern on a navy blue jersey makes Nottingham Forest's shirt one of the best for the new season. It's a stylish kit with a retro vibe and a great contender for the top third kit as the Midlands club returns to the Premier League after a 23-year absence.

The new third kit will be available to purchase online from Thursday, August 11. 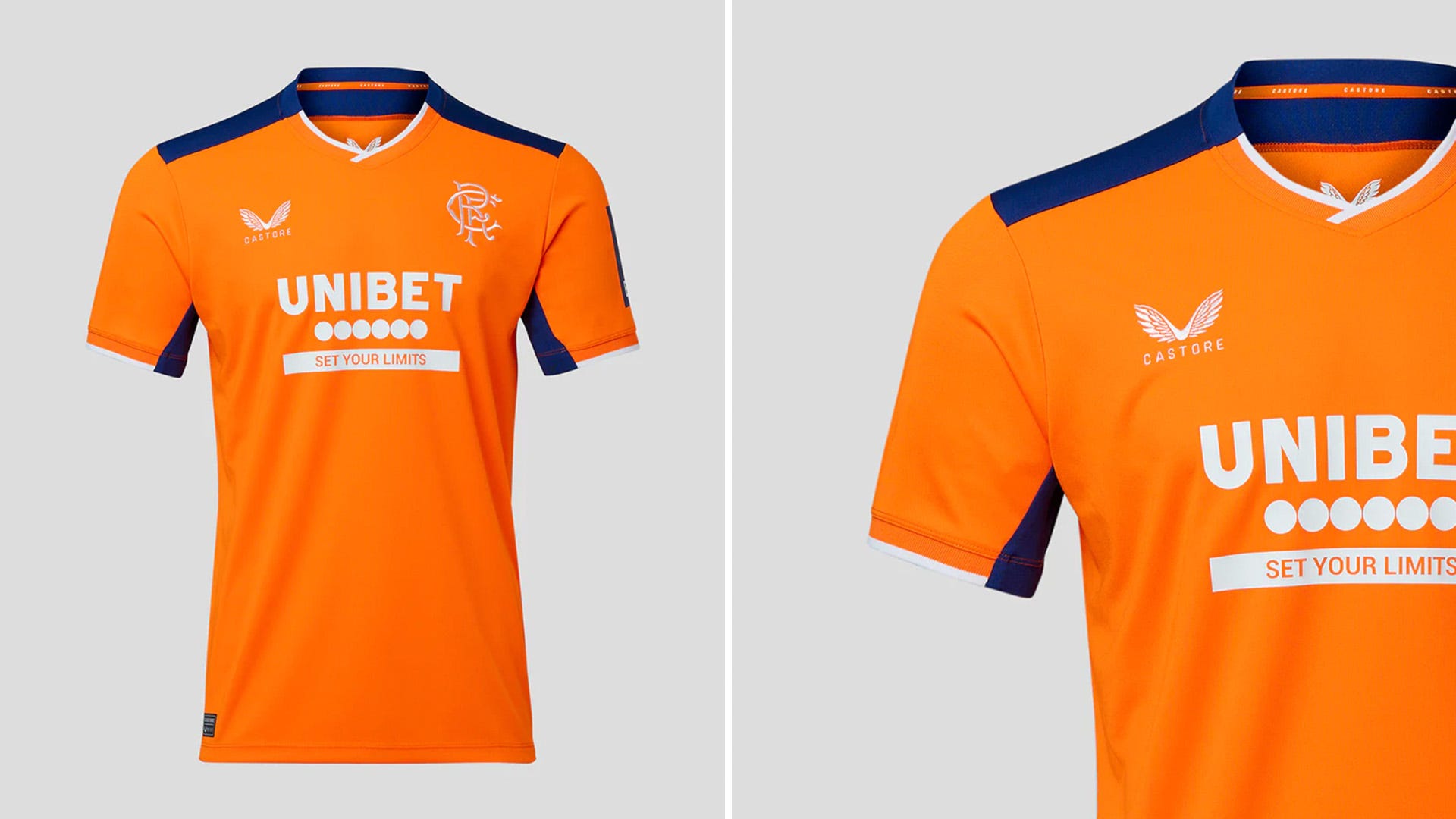 Inspired by the 1993/94 third shirt, the Ranger's third kit comes in a vivid tangerine colourway with dark blue detailing for a great colour combination. It's a pop of summer in their kit collection for the season, which features a classic blue and white home kit. 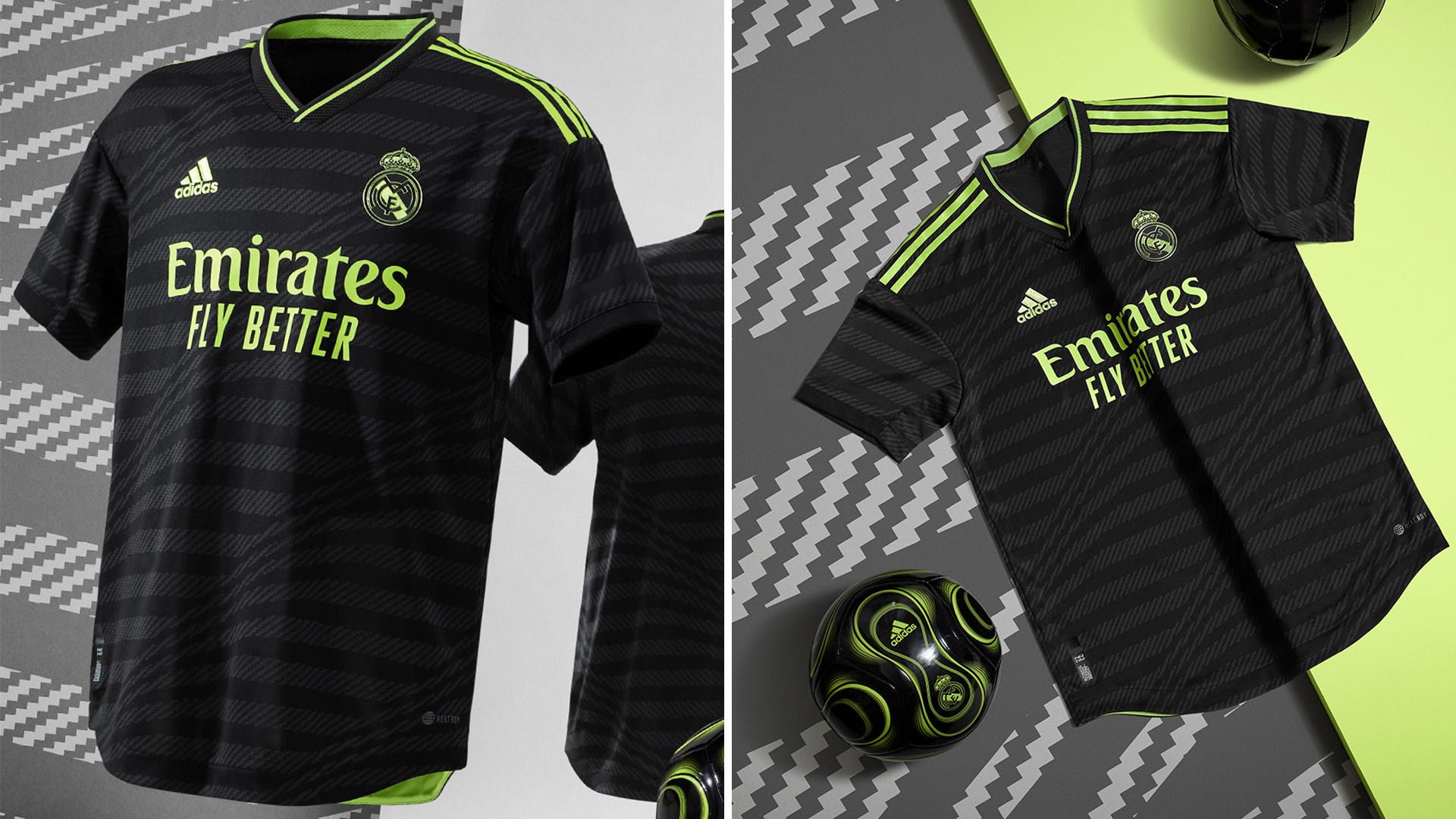 Real Madrid looks forward to the future with a 2022-23 third kit inspired by elements from their famous stadium, the Santiago Bernabéu. A sleek and modernised black and neon yellow colourway represents the vision of what the new Bernabéu will look like on European match nights and the unmistakable lights of the stadium that light up the city of Madrid. It's certainly fitting for the current Champions League holders and La Liga champions.

The new third kit will be available to purchase on adidas from Monday, September 12. 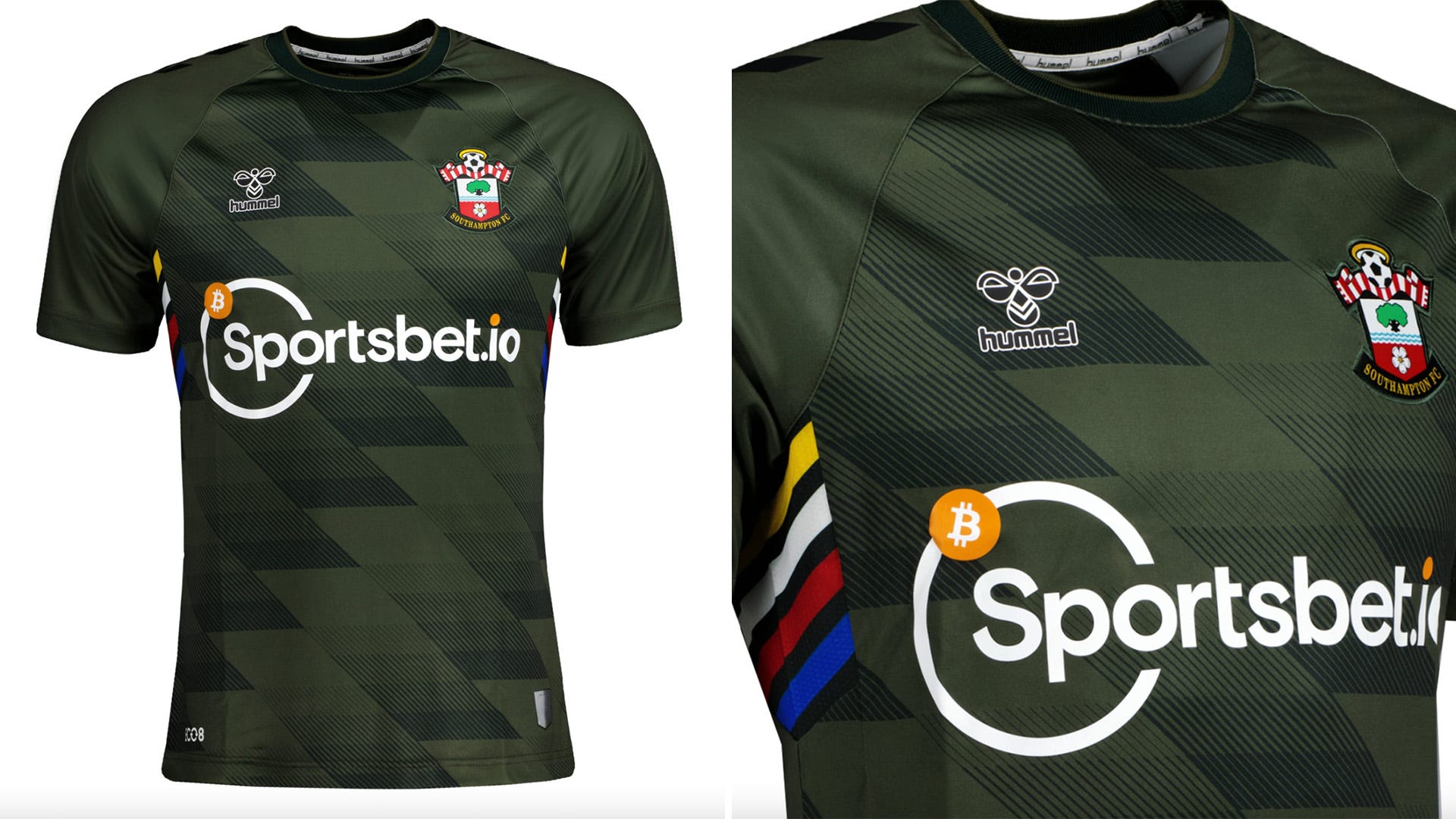 The Southampton third kit takes inspiration from the RAF planes that were first flown from the city. Hence the khaki colourway with shading, creating a modern and sharp design. It's a pattern that mimics the camouflage used on the planes but also the movement of the propeller.

Get it from the Southampton club store for £55.00 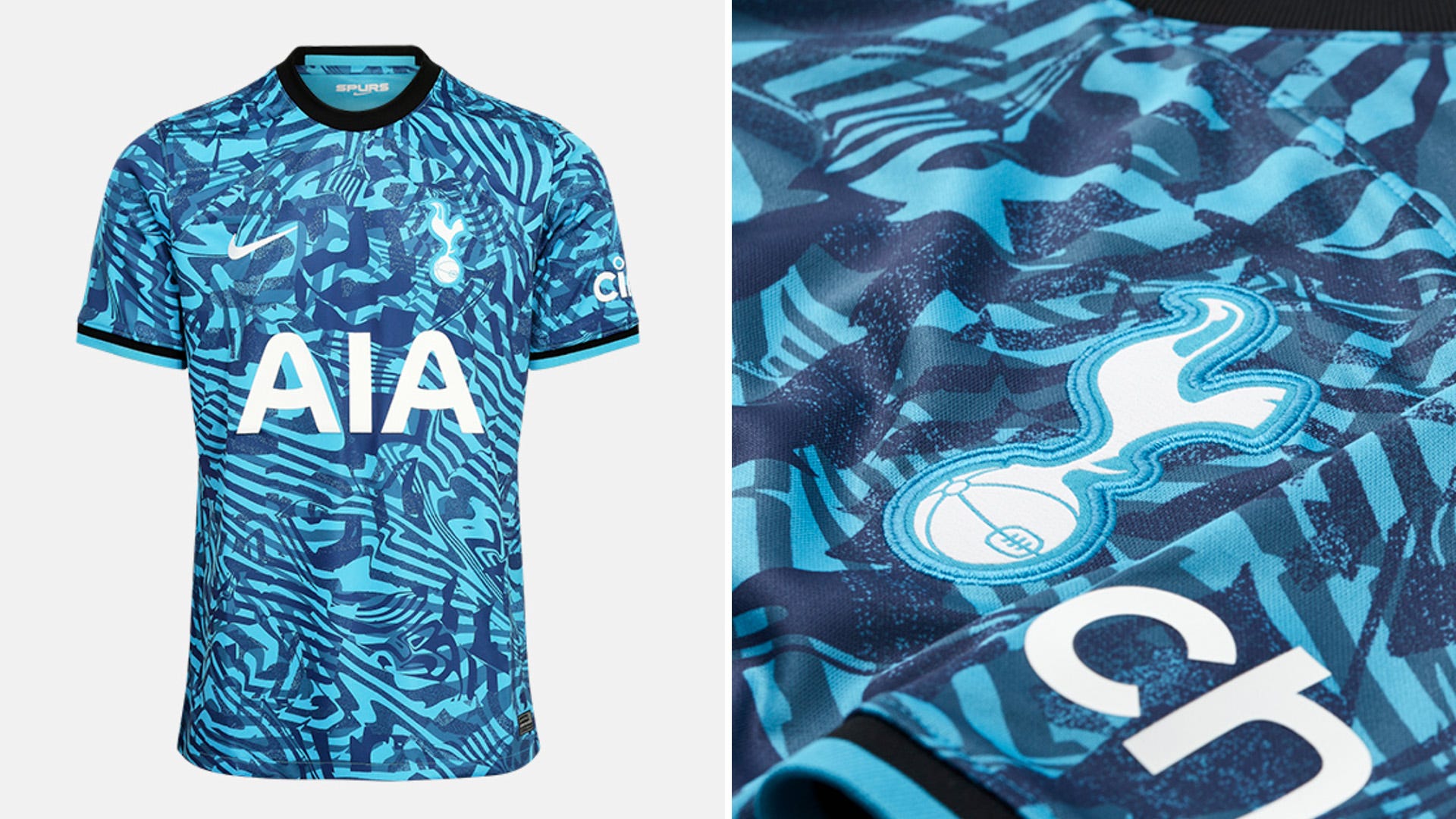 Tottenham continues their 'Dare To Go Bold' theme for this year's third kit with an all-over graphic print third kit. It comes in a turquoise and blue colourway, with a wavy design reminiscent of something you'd find under the sea. 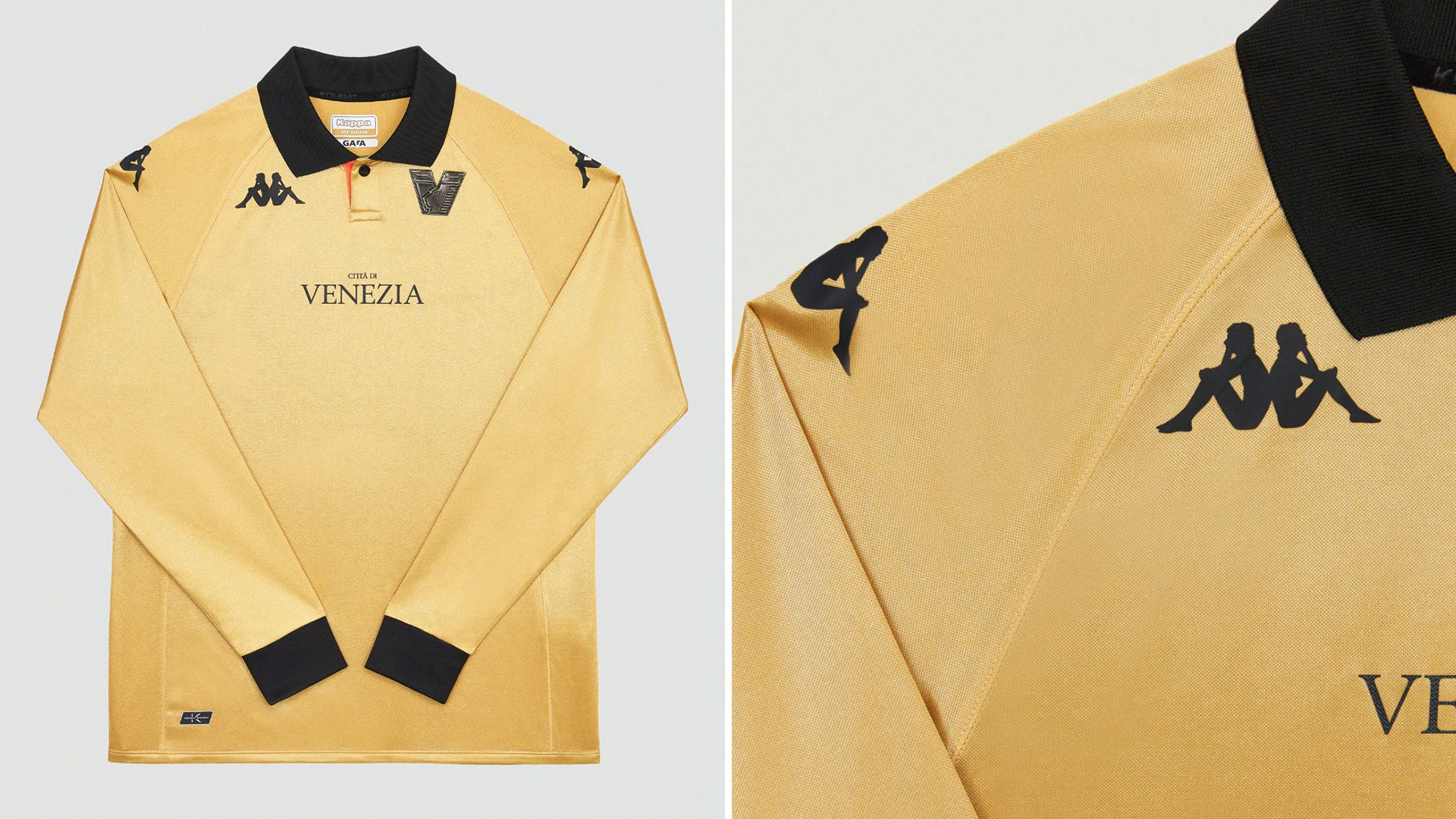 You can see precisely why the Venezia third kit is completely sold out. It's a belter with a gold colourway inspired by the history of Venice. Throughout the club's history, gold has been used as a nod to Venice's gilded churches, monuments and palazzi. 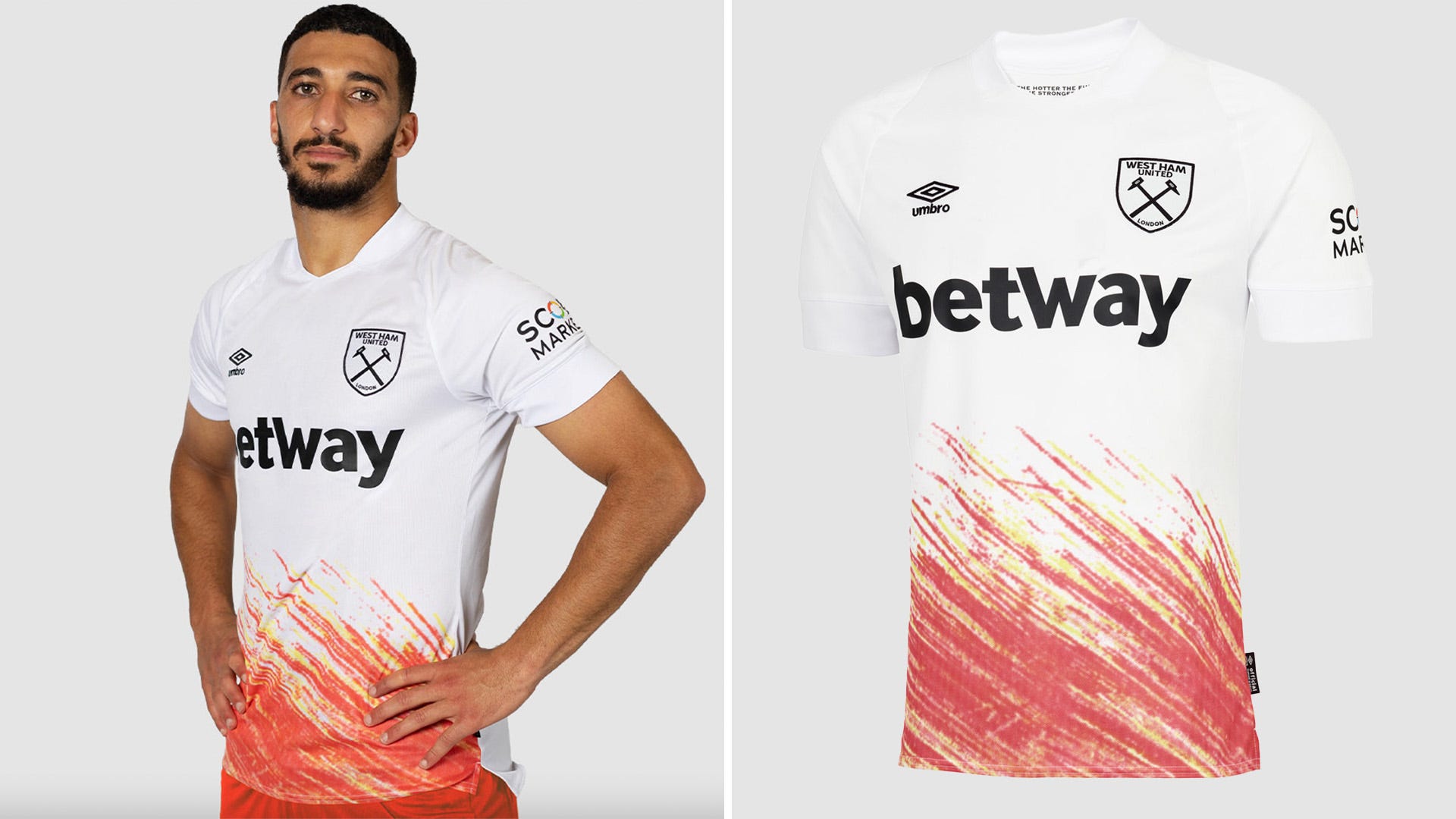 The West Ham third shirt pays tribute to the club's industrial roots when it was established as the Thames Ironworks in 1895. The kit contains the message 'The hotter the furnace, the stronger the iron', portrayed through the bold ironworks spark design that dominates the shirt's bottom.