Which football teams have the most fans? 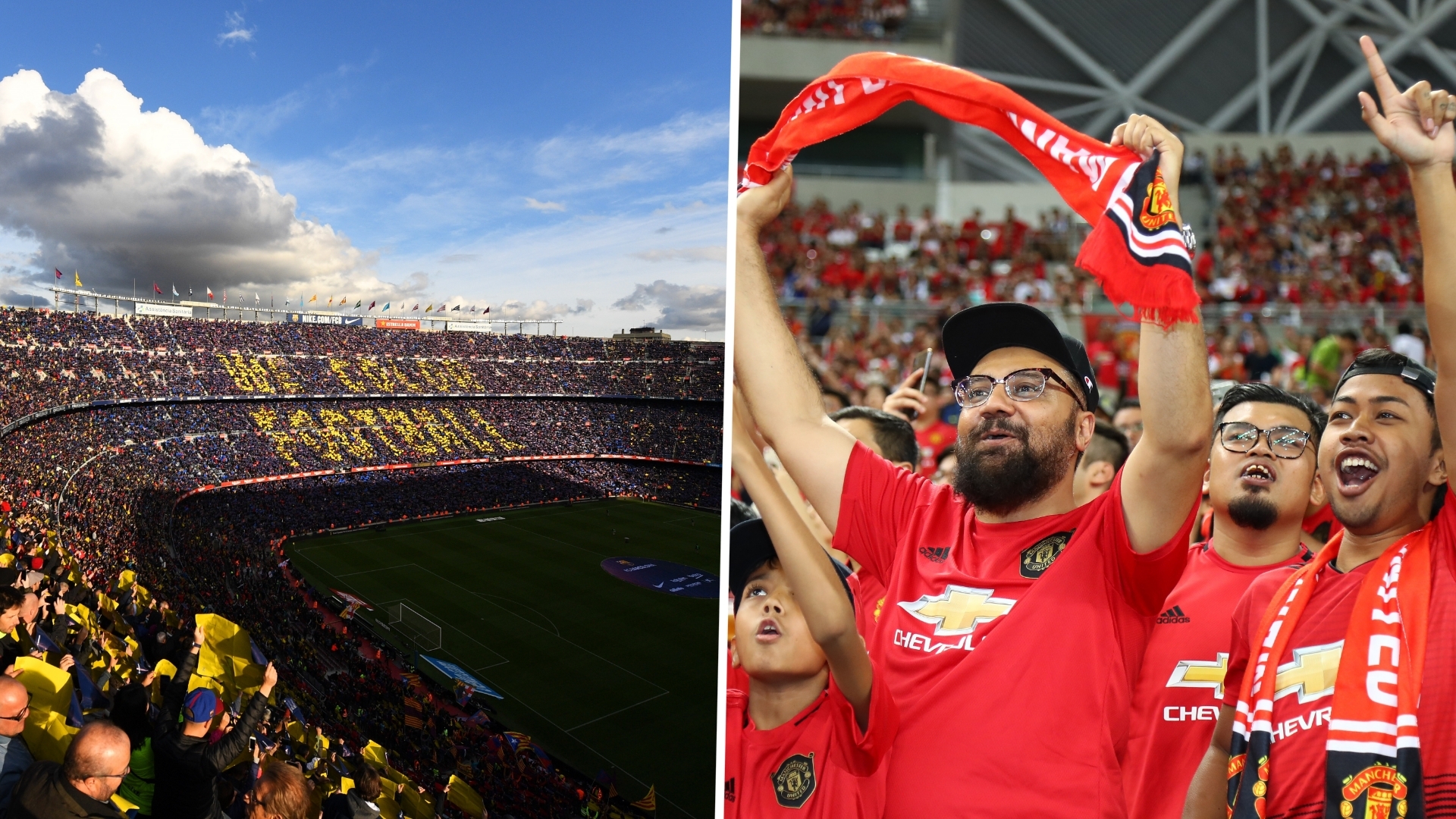 From traditional powerhouses to new-age behemoths, football clubs all find themselves in competition for the affection of supporters

Football, like most sports, is just as much about the fans as it is the actual events on the field.

The business of the game has relied heavily on support from the terraces in the form of ticket sales and more recently in the retail market, where merchandise, such as replica shirts, is sold.

Successful clubs are usually the best supported, but variables such as geography, history and cultural significance come into play, so success doesn't necessarily translate to support. It definitely helps, though.

So, which clubs have the most fans?

Real Madrid and Barcelona were the two most valuable football clubs in the world in 2020 according to Forbes, which put their worth at over $4 billion (£2.8bn) each. Manchester United were not far behind at $3.8 billion (£2.7bn), while Bayern Munich, Manchester City and Chelsea rounded out the top five.

It's nigh on impossible to get an exact figure on how many fans each club has, but looking at things such as shirt sales, stadium size and social media followers helps to create a rough picture of popularity.

Before anyone reaches for the rage button, we must emphasise the word 'rough'!

With that in mind, Goal takes a look at which football clubs have the most fans worldwide by taking into account a variety of factors.

Which football clubs have the most social media followers?

Real Madrid and Barcelona are the football clubs with the most followers on social media across all the major channels, with no other team coming remotely close to the Clasico rivals.

Manchester United, a club which did not have an official Twitter account until April 2012 (three years after Liverpool), are the next most popular club online, but they are well behind Real and Barca.

Juventus follow the Red Devils, no doubt buoyed by the Cristiano Ronaldo effect, with just over 100 million followers.

Chelsea and Liverpool are next, with the Blues, perhaps surprisingly, marginally ahead of the six-time European champions.

Despite their relatively new stature among the traditional powerhouses of world football, Paris Saint-Germain's online presence is considerable, with just under 100 million followers.

The French giants have social media clout that is comparable to that of Bayern Munich and bigger than that of Arsenal and Manchester City.

Seven-time European Cup-winners AC Milan have to make do with a place outside of the top 10 with just over 40 million combined followers.

Milan's following means that they occupy the same sort of ground as their rivals Inter, Premier League side Tottenham and Brazilian giants Flamengo, who all have followings in the region of 37-38 million.

Which football clubs have the biggest stadiums?

As the above table shows, it is probably not wise to judge the global popularity of a club based solely on the size of its stadium.

While Barcelona and Real Madrid are in the top 10 in terms of stadium capacity, the likes of Manchester United, Liverpool, Juventus and Bayern Munich are all conspicuous by their absence.

South Africa's Kaiser Chiefs and Mexico's Club America are undoubtedly the biggest clubs in their respective countries, but their appeal does not extend beyond their borders in the same way as other clubs.

ATK Mohun Bagan may be able to fit more fans inside Salt Lake Stadium than Man Utd can get into Old Trafford, but they are nowhere near as well supported.

Indeed, only two of the top 10 most-followed clubs online - Real Madrid and Barcelona - feature on the list of clubs with biggest stadiums.

You can see the top 20 biggest stadiums in the world here.

Which football clubs sell the most jerseys?

The most popular football jerseys vary from country to country, so Flamengo shirts may sell well in Brazil or Aston Villa shirts may do well in parts of England but not so well outside of those countries.

There are, however, a number of clear winners when it comes to shirt sales globally, with millions being made each year.

Barcelona, Real Madrid, Manchester United and Liverpool regularly feature on lists of the highest-selling jerseys, as do Arsenal, Chelsea, Paris Saint-Germain and Juventus.

According to Planet Football, Liverpool's home jersey was the best-selling football shirt on Amazon for 2019-20, while the home and away shirts of Man Utd, Man City and Arsenal all featured in the top 10.

However, when it comes to the United States market alone, Real Madrid and Barcelona jerseys are much more desirable than the Premier League clubs, with a number of Mexican teams also proving popular.

Which football teams have the most fans?

Real Madrid and Barcelona appear to have the most fans worldwide, with Manchester United - once the undisputed biggest sports team in the world - following the Clasico giants as a close third.

Not only do the aforementioned trio top the list when it comes to social media followers, they also boast some of the biggest football stadiums in the world and sell the most shirts across nearly all markets.

Their appeal is truly global and that is reflected in their value. Indeed, they are the only football clubs in the top 10 of Forbes' most valuable sports teams in the world.

Liverpool, Juventus and Bayern Munich are among a cohort of traditional giants who lag behind the top three, while new-age behemoths like Chelsea and Manchester City also boast considerable support.