Euro 2016
16:20 8/9/14
facebook twitter reddit copy
Comments (0)
Getty
The Borussia Dortmund attacker was picked to start as Germany took on Scotland at Signal Iduna Park on Sunday night, but picked up another ankle injury late on

Marco Reus was once again picked to start for Germany as Joachim Low underlined his enduring importance to Die Mannschaft despite missing the World Cup, though another injury soured a largely promising display.

In a dominant, if profligate, display by Germany, in which they recorded 69 per cent possession, Reus occasionally struggled to consistently affect the match. The world champions’ often slow build-up play, relative to the fast-paced, high-tempo style he’s used to at Dortmund, coupled with Scotland’s deep, defensive setup, starved Reus of the space that he loves to break into.

He may not have had many opportunities to drive towards goal – and, when he did start motoring, he was quickly felled – but he was still presented with chances to add to his seven international goals and was unlucky not to get on the scoresheet.

In fact, no player tested Scotland No.1 David Marshall more often than Reus, who stung the Cardiff City goalkeeper’s palms on three occasions while his only off-target shot was a not-quite-clever-enough flick that couldn’t quite find the back of the net from close range. He produced two further solid stops, one that had Marshall diving to his right and the other a sweetly struck volley that was straight down the shot-stopper’s throat.

His off-the-ball movement was often inventive, interchanging with Thomas Muller, Mario Gotze and Andre Schurrle in Germany’s fluid, striker-less attack, and he managed to create little pockets of space despite Scotland’s deep line and crowded box. He created two good chances for his team-mates and his dangerous 70th minute corner resulted in a goal-mouth scramble that produced Germany’s winner.

It is always more worrying when an attacker is not crafting chances at all than if he is missing those that come his way, and while Reus may not have got on the scoresheet – or registered an assist – he always looked dangerous; Muller netted twice, but it was Reus who always seemed to spark the most fear amongst the Scotland defensive ranks.

It will please Low greatly, too, that he has slotted back into the side so seamlessly, and Reus showed enough class to silence any doubters who might claim that he should not automatically return to the starting XI of a side that won the World Cup just two months ago. He dovetailed well with the frontline, was able to drop deep and recycle possession, or run the channels and deliver from wide, as well as move into the No.9 position and threaten Marshall. 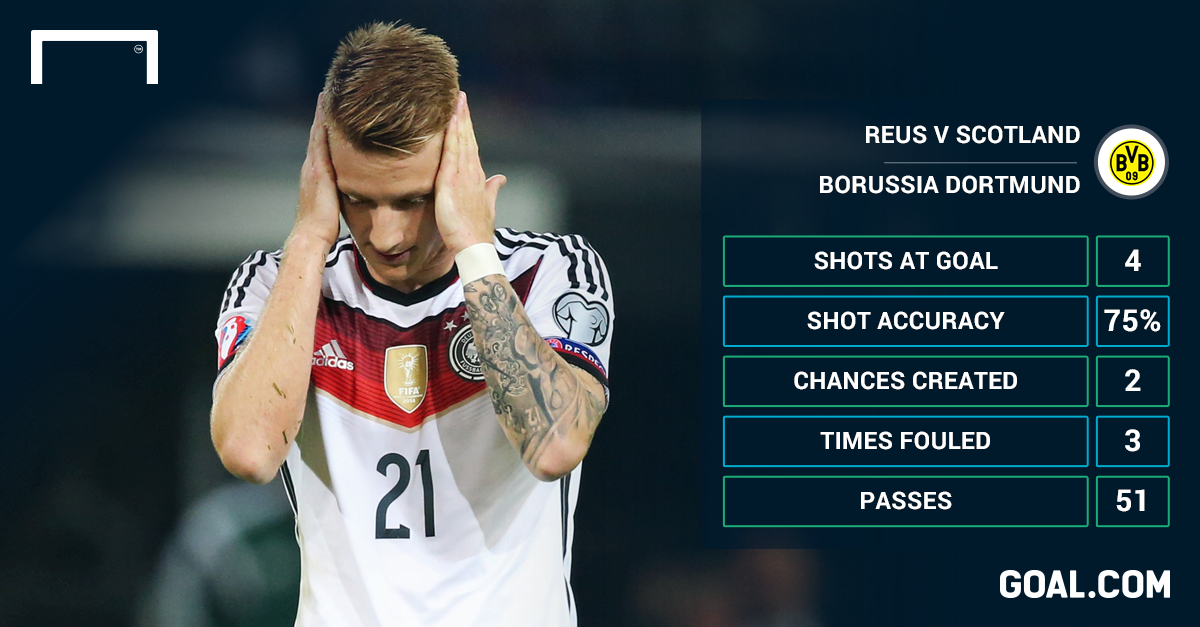 The undoubted low point of Reus’s evening’s work was an injury he sustained in the dying embers of the match, with Charlie Mulgrew clattering into him – and earning a yellow card which was quickly followed by a second as he was shown his marching orders late on – and the Dortmund man appeared to roll his ankle in the challenge.

Reus was in obvious pain, holding his head in his hands and writhing on the floor as his team-mates beckoned to the bench, though he was eventually able to hobble off the pitch with some assistance from the Germany medical staff. The concern, however, will be that it is the same ankle to which he tore ligaments prior to the World Cup.

Afterwards, Low played down the seriousness of the injury, though Reus will undergo tests on Monday to determine the extent of the problem. “It seems that it is not totally bad," the World Cup-winning coach told RTL. “But we have to wait for the further examinations.” 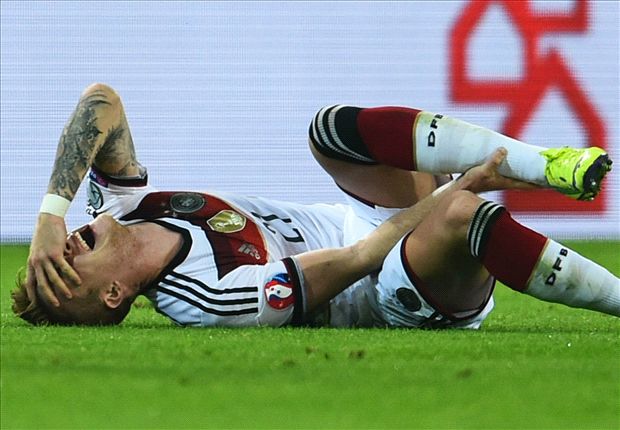 There are few players quite as coveted as Reus right now, even if his performance against Scotland fell short of the ludicrously high standards he sets in a yellow and black jersey.

A late injury eerily similarly to the one that dashed his World Cup dreams does throw up the fear that he may never reach his previous fitness levels, but he is still likely to be at the top of most club’s wishlists for the foreseeable future.

The 25-year-old’s appeal is multiplied by the presence of a release clause that only activates in the summer of 2015 and which massively undervalues the former Gladbach attacker at just €25 million (£19.8m). CEO Hans-Joachim Watzke confirmed the presence of the clause in August, though insisted Dortmund would “do our utmost to convince Marco that his future is here”.

Nevertheless, it puts both the club and the player in a curious position. BVB hope the chance to etch out a special place in Dortmund’s history will appeal to Reus, who has supported the club all his life, but talks over a new contract – which would remove the aforementioned clause – have so far stalled.

With a frenzy of bidders expected next summer, some clubs are reportedly looking to steal a march on rival suitors in January and will try to tempt Dortmund with offers far in excess of the buy-out clause.

The Bundesliga outfit are stubborn, though, and their willingness to allow Robert Lewandowki to leave on a free, rather than sanction a sale to Bayern, suggests they will resist any offers and ensure Reus sees out the 2014-15 campaign at the Westfalenstadion – even if it means they miss out on a potential Bundesliga record sale (currently the £32.5m they got for Mario Gotze).

For now, though, the onus is on Reus to overcome this latest injury setback and prove his fitness once more, and, curiously, a spell on the sidelines could increase Dortmund’s chances of keeping their star player.
facebook twitter reddit copy
Comments (0)