Two games, two goals, six points. The impact Gabriel Jesus has made at Arsenal since his move from Manchester City this summer has been immediate.

The Brazil international has been a sensation from the moment he walked through the doors in north London, transforming an attack that last season had looked largely stale and one-paced, especially in the central areas.

An excellent Premier League debut in the 2-0 opening day win at Crystal Palace followed and then last weekend the 25-year-old announced himself to the Emirates Stadium in thrilling style, becoming the first Arsenal player in the Premier League era to score twice for the club on his home debut.

Jesus also registered two assists in the 4-2 success against Leicester City, making him the first Arsenal player since Alexis Sanchez in 2016 to have four direct goal involvements in a league game, as well as the first since Theo Walcott way back in 2012 to get two or more goals and assists in the same match.

So it’s no wonder the £45 million ($53.7m) summer addition, a transfer fee that already looks like a bargain, has dominated the headlines ahead of this Saturday’s trip to Bournemouth.

“I wouldn't like to play against him. I have never been a defender but I can imagine that they don't enjoy it.” 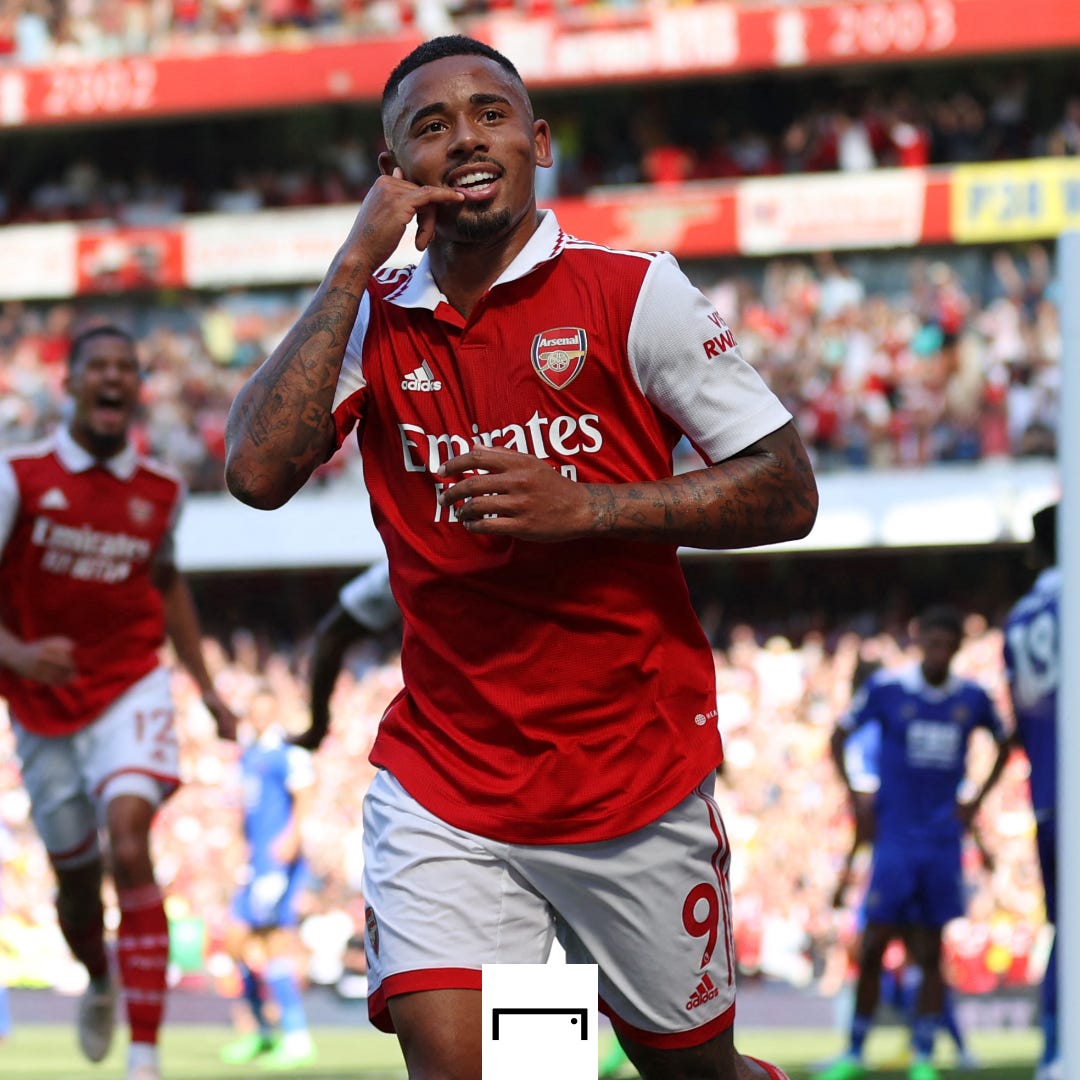 Arsenal’s problem last season was clear for all to see.

Goals, or the lack of them, was a continued issue.

Whether it was during the opening months of the campaign when the misfiring Pierre-Emerick Aubameyang was still there, or when Alexandre Lacazette was leading the line following Aubameyang’s initial banishment from the squad and subsequent departure to Barcelona.

But the impact Jesus has made on this Arsenal team is not just about goals, it goes far further than that.

For the first time in a long time, the Gunners now have a presence inside the box.

While Lacazette did plenty of good work from deep last season and linked up well with runners going beyond him, he rarely got himself into positions that would trouble the opposition centre-back.

In his 20 Premier League starts last season, the Frenchman had just 31 touches of the ball inside the penalty area. Jesus has already had 26 in his first two Arsenal appearances.

He has also taken eight shots from inside the 18 yard box during those games. It took Lacazette until his ninth start (Boxing Day) last season to hit that number.

Jesus’ impact has been remarkable and Arsenal now look a totally different proposition going forward as a result. 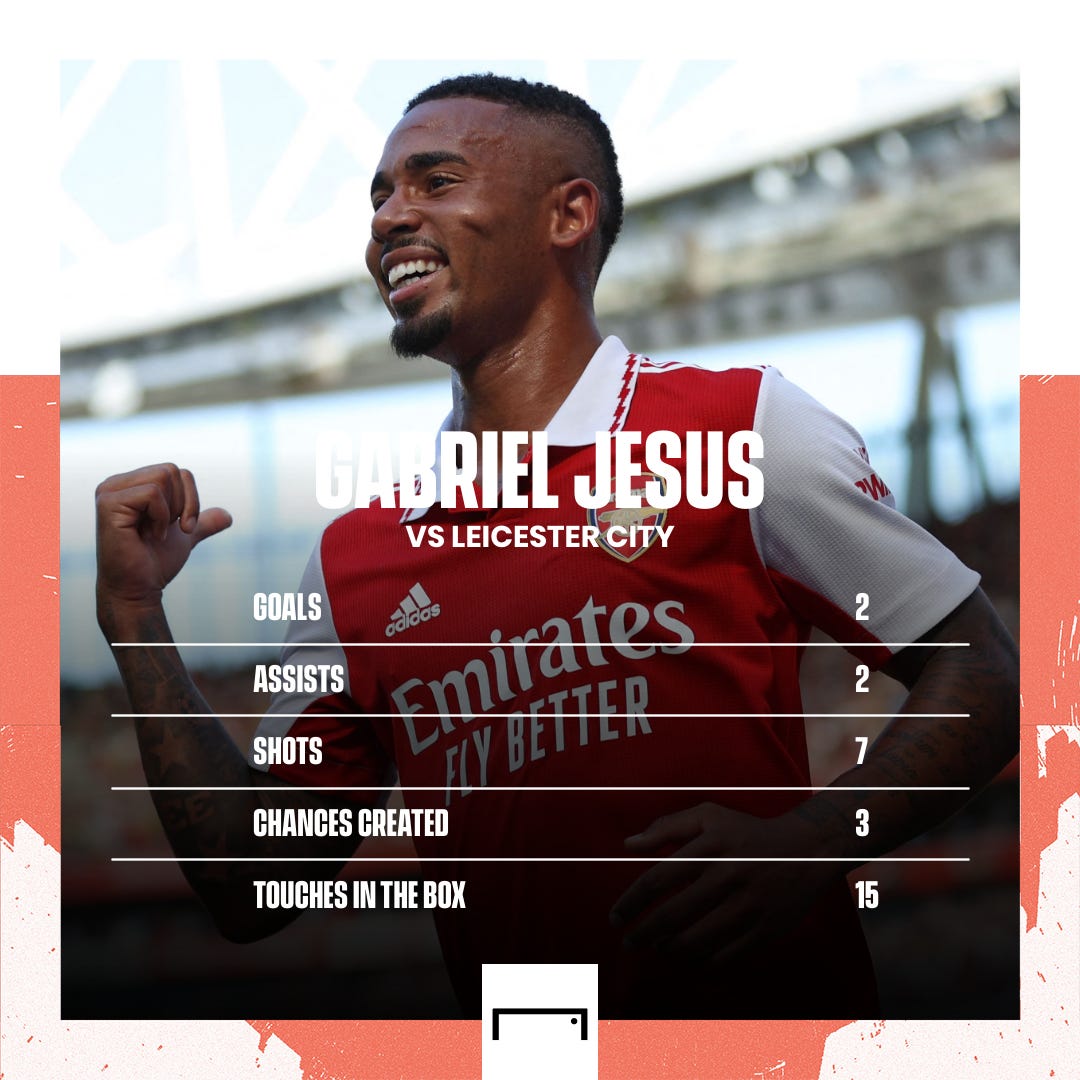 “The work he does for the team is unbelievable,” Granit Xhaka said, while discussing his new team-mate. “We're more than happy.”

Happy would be an understatement, if you were looking for a word to describe how those at Arsenal feel about Jesus’ first few months at the club.

They were always convinced he would make a difference, that’s why they resisted the urge to dip into the transfer market in January to find a replacement for Aubameyang.

But the ease in which he has adapted and the way he has settled so quickly has been a huge bonus to Arteta and his team.

With Jesus at the head of the frontline, Arsenal have a fluidity to the attack that they were desperately missing last season.

His relationship with Gabriel Martinelli has immediately caught the eye, with the two Brazilians linking up and interchanging positions exceptionally well on the left hand side during the opening two league games.

“He’s an example [to others],” said Oleksandr Zinchenko, who - like Jesus - arrived at Arsenal from Manchester City this summer.

“He was good during all the years I’ve spent with him. He’s an incredible player, always hungry for goals which is the best quality as a striker. He doesn’t stop at all.

“He’s the guy who is always happy for the team. The team is always first and the club always in front of any individual thing.” 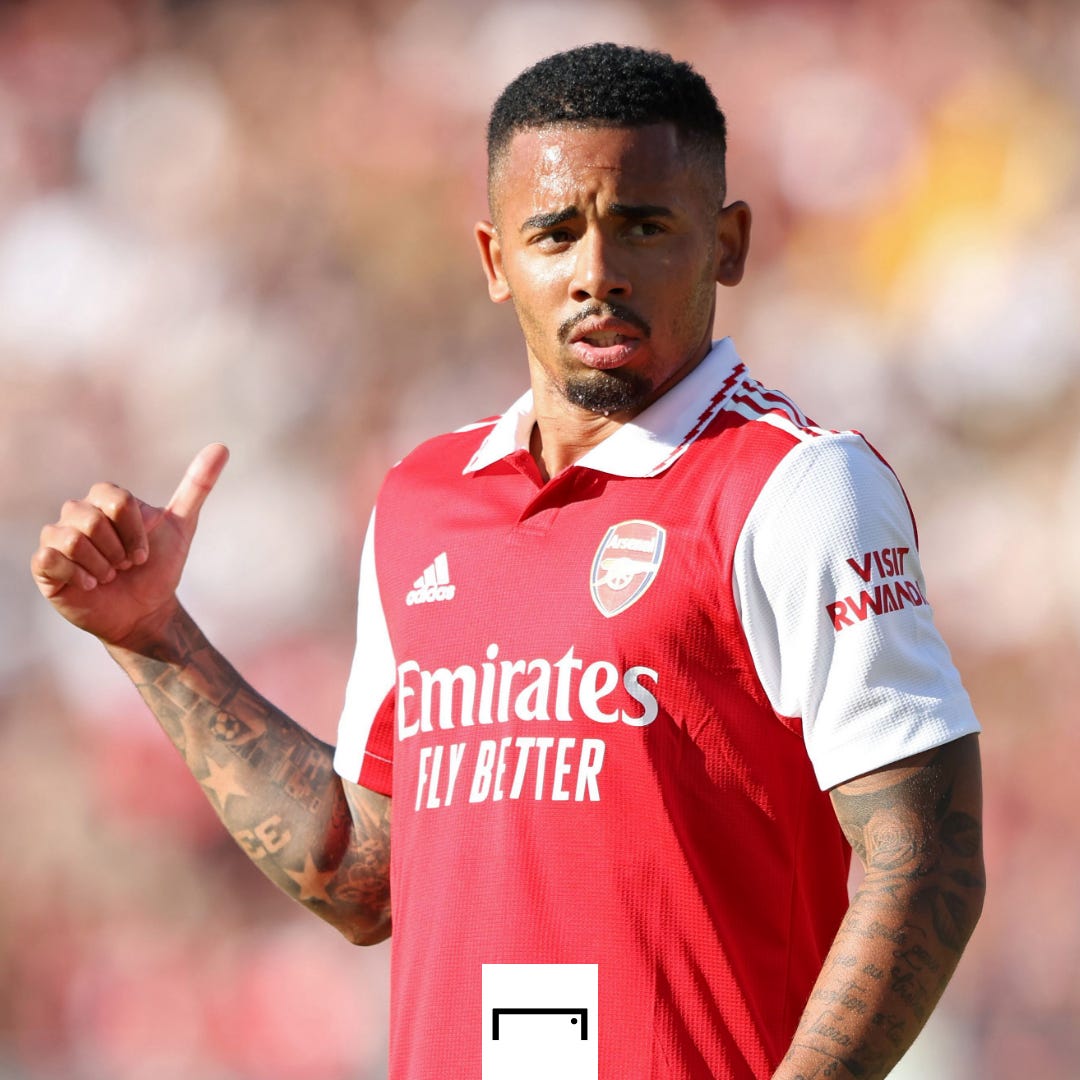 It’s that type of character that has made Jesus such an immediate hit at Arsenal.

While his impact on the pitch has been obvious for all to see, he has also impressed away from the public eye - with his personality and his work ethic impressing team-mates and club staff.

One of the big reasons he opted to join Arsenal over multiple other options this summer, was the responsibility that Arteta was offering him.

At 25, the Gunners boss was adamant that Jesus was ready to become a real leader and he has come in and taken on that type of role within the changing room, so much so that Arteta has named him in his three-man leadership group this season, alongside captain Martin Odegaard and Granit Xhaka.

Club sources talk glowingly of Jesus and the way he has conducted himself following his arrival.

Understandably he has forged a close bond with the Brazilian contingent at Arsenal and has taken summer signing Marquinhos under his wing, but he and the other Portuguese speakers are all ensuring they communicate in English as much as possible to avoid the potential for anyone feeling left out.

Arsenal and Jesus’ focus is now on Saturday’s trip to Bournemouth and the opportunity to begin a Premier League season with three successive wins for the first time in 16 years.

The Brazilian’s impressive start to life with the Gunners has helped lift the spirits after such a demoralising ending to the 2021/22 campaign and Arteta will be desperate to ensure his side continue to build on the momentum they have picked up following the wins against Palace and Leicester.

And with Jesus in the type of form he is in right now, few would bet against Arteta’s side doing exactly that at the Vitality Stadium on Saturday evening.