Barcelona temporarily extended their lead at the top of La Liga to six points after goals from Bojan, Pedro and Yaya Toure gave them a 3-0 win over Deportivo La Coruna.

Deportivo started the game positively and looked as though they would take on their illustrious hosts head on. But Barca quickly wrestled control of proceedings and they should have taken the lead on eight minutes. Gerard Pique chested down a cross from Dani Alves for Pedro, who steamed in between two defenders inside the box but somehow smacked his shot against the upright with just the goalkeeper to beat.

The visitors responded when Riki shook off two defenders and rifled in a shot from a tight angle, but it sailed straight to Victor Valdes. From then on, however, it was Blaugrana all the way and they duly took the lead on 15 minutes thanks to another sumptuous Xavi assist. The stand-in captain picked up a pass from Jeffren, spun around on the edge of the box and slipped in a through ball to Bojan Krkic, who easily stabbed it past the advancing Dani Aranzubia.

Jeffren Suarez almost doubled their advantage five minutes later when he latched onto Lionel Messi’s through pass but his shot was slapped away by Aranzubia. The Depor short-stopper was forced into another miracle save minutes later when he tipped over a delightful Messi chip that left the Cam Nou faithful gasping in amazement.

And the home crowed were wooed again on 23 minutes when Dani Alves’ bicycle kick from a near-impossible angle bounced off the crossbar, before Xavi’s rebound was saved by Aranzubia.

An outrageous one-two of backheels between Messi and Alves almost released the Argentine on another path of destruction, and moments after that, Little Lionel did go on his rampaging run in a counter-attack when he waltzed past three defenders before a last-ditched tackle by Alberto Lopo forced his shot wide.

Despite Barcelona’s fantasy football and incessant onslaught, SuperDepor managed to keep the damage down to just 1-0 at half-time. 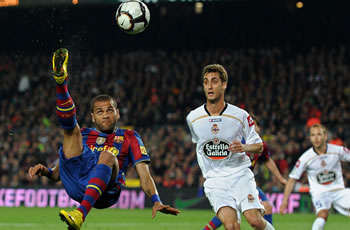 The Galicians began the second period with a more cautious and compact approach and it seemed to work as the Blaugrana were deprived of the clear cut chances they were carving out in the first half.

Depor in fact had the opening chance of the half on 52 minutes when Riki forced another good save from Valdes when he let rip with a low drive on the run. Barca had to wait until the hour mark before getting their first attempt at goal when Rafa Marquez smashed in a loose ball from a corner but Sergio stood his ground at the near post to head it away on the line.

Straight to the other end, Riki dragged his half volley wide from a Sergio free kick before Pedro came close for the Catalan giants when he ran onto Seydou Keita’s one-touch pass, but his shot was smothered by Aranzubia.

A goalmouth scramble almost handed Messi his 28th La Liga goal on a plate, but he was just a tad casual when he prodded the ball past Aranzubia, only for Laure to intercept before it could roll over the line.

But Depor’s excellent defensive work was undone on 68 minutes. Victor Valdes’ long kick bounced all the way to Aranzubia, but the goalkeeper’s woeful clearance trickled straight to Pedro, who chipped his shot from the centre circle all the way into the back of the net.

And it quickly became 3-0 three minutes later. Xavi’s corner made its way to the back-post for Toure Yaya, who blasted in a half volley which Aranzubia could only parry into his own net.

Thierry Henry had a chance to break a two-month goal drought ten minutes from time when he connected with Pedro’s low cross, but could only shoot straight at Aranzubia from 12 yards out. That proved to be the last chance either side had as Barcelona galloped to another convincing victory.

Want more from Goal.com? Become a fan of Goal.com North America on Facebook.