By Robin Bairner
Los Blancos’ dream of claiming a tenth European title on home soil has been ended by les Gones as a second half strike from the Bosnian teenager has forced OL through.
Real Madrid 1-1 Olympique Lyonnais (agg:1-2) - Lineups/Stats
Champions League Fixtures & Results

Commanding a 1-0 lead from their home leg, Claude Puel’s well organised, disciplined side learned their lesson from last season’s second leg capitulation against Barcelona to squeeze through 2-1 on aggregate after a 1-1 draw at the Bernabeu.

The match started in perfect fashion for los Blancos, with Cristiano Ronaldo striking home beautifully from an acute angle. Gonzalo Higuain then missed an open goal as the home side dominated but could not add to their advantage. After the interval, the Ligue 1 side were far more aggressive and got their reward as Miralem Pjanic battered home from close range.

Lyon boss Claude Puel had warned his side to expect their hosts to whip up a tempest in the opening 20 minutes, but even he couldn’t have imagined the whirlwind start los Merengues made. Within 20 seconds of play Hugo Lloris had to advance smartly from his goal to block a fine opening for Kaka, who had made good space in the right channel.

This early gambit from the Spaniards was to set the tone for the first half, and los Blancos would soon have a goal to fuel their momentum. Back after injury, Guti showed all his quality on five minutes to clip a delicious pass over the top of the OL defence, pinpoint into the path of Ronaldo. The Portuguese burst away from Cris before firing the ball through Lloris’ legs from an unlikely angle.

Ronaldo was to prove central to many of Real’s best moments in the first half, injecting pace into their often patient build-up play. Nevertheless, he would not be at the cutting edge of the charge for the remainder of the half. Instead, Gonzalo Higuain would come to the fore, snapping a shot by Lloris’ left hand post soon after the opening goal.

Kaka wasn’t about to be upstaged either, making a number of direct first half runs, the pick of which carried him by three feeble French tackles before he sent a shot into the gloves of the visiting custodian from the edge of the penalty box.

Les Gones were offering precious little in an attacking sense, breaking their hosts’ stranglehold on the game briefly just after a quarter of an hour of play to win a corner. From the flag kick, Real could only partially clear, allowing Jeremy Toulalan to bend an effort by Iker Casillas’ upright.

The Spain No.1 wouldn’t be called into shot-stopping action throughout the first half, though Lloris certainly would at the opposite end, producing a brilliant stop low to his left after Kaka had laid the ball into the path of Higuain near the periphery of the area.

Prior to that moment, the young French goalkeeper had a lucky escape. Having charged from his box to try and intercept a through ball from Kaka to Higuain, the goalkeeper was beaten in a foot race by the Argentine. Round the goalkeeper and with much of the target to hit, the in-form striker hit the inside of the post and watched the ball dribble along the goal line before dropping safe. 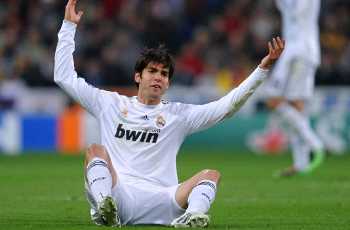 
Los Blancos would also have a let off before the break, though. On a rare foray forward, Lyon unleashed Sidney Govou down the right hand side. The veteran turned inside Alvaro Arbeloa and sent a low cross into the box that dropped just behind Jean Makoun, who couldn’t make good contact on the ball just eight yards out.

Guti enjoyed a bright evening, and his quick thinking over a set piece situation nearly set Higuain free. A combination of Jean-Alain Boumsong and Aly Cissokho just managed to squeeze the attacker out, while a late headed flick from the same player flashed past Lloris far post minutes before an interval that was much welcomed by an OL side who had been stretched to their limit in the opening period.

It was soon apparent after the break that Lyon were going to approach the second period with a good deal more attacking zest. Within three minutes of the restart a Cesar Delgado dink had picked out substitute Maxime Gonalons at the back post, though the young midfielder was stretching too much and couldn’t angle his header on target.

Govou then wasted a fine opportunity from around the penalty spot after an intuitive pass from Kim Kallstrom, who had also been introduced at the break. This Lyon barrage was still not over, with Lisandro bulldozing his way into a shooting position 30 yards from goal, though Casillas got two strong fists behind the Argentine’s fearsome drive.

Ronaldo fashioned an opening for Kaka a blink of an eye later, though the Brazilian’s effort from the edge of the box flashed by the post when he perhaps should have found the target. Esteban Granero then scooped a good chance over as los Blancos replied.

After this lively opening, the two midfielders started to get their teeth into the fixture, preventing the flow of clear openings. A dangerous Pjanic free kick was a toe away from Cris getting a decisive touch to flick the ball beyond Casillas, while at the other end Rafael van der Vaart came off the bench to crack a shot over the top from the edge of the area.

Lyon had wrestled the upper hand of this game away from their hosts and would stun the Bernabeu with 15 minutes remaining. Delgado, who had looked dangerous throughout the second half, spun a low pass into the box for Lisandro, whose touch from 12 yards was perfect for Pjanic to march onto, take a touch and smash into the net.

Immediately, Raul was brought off the bench to replace Kaka as the expected onslaught began. Crossed rained into Lloris box, but a combination of solid defending and poor delivery prevented los Blancos even threatening the visiting net.

As Real flooded forward in the dying seconds, Lisandro should have added to Lyon’s lead. Played in by Cissokho, the former Porto man had seconds to steady himself in front of goal but chocked his shot wide. Delgado had a similar opportunity, but smashed over in a ridiculously frantic close to the game.

That proved a footnote, as the big spending Galacticos would crumple out in the first knock-out stage for the sixth consecutive occasion.

Become a fan of Goal.com USA's Facebook fan page for all the latest news and insight into everything related to the beautiful game
Close