The football world was rocked when the announcement of a breakaway Super League featuring Europe's most elite clubs were confirmed in April 2021.

A move which looked set to change football as we know it forever failed to get off the ground, however, with a number of clubs withdrawing less than 48 hours after their participation was confirmed.

Supporter pressure and high profile opposition from various figures within the sport, including UEFA and FIFA, had a major impact on the project.

But what was the Super League, which European teams were slated to be involved, and how would it have affected the Champions League? Goal has the full guide.

What is the Super League & which clubs are involved?

The Super League concept sought to establish a new competition involving 20 clubs - with 15 permanent ones, called the "founding clubs" - and five guest teams who would be selected for involvement each season based on the results of their previous domestic seasons.

How many goals will Haaland score for Man City this season (all comps)?

Results will be shared soon.

How many goals will Haaland score for Man City this season (all comps)?

But in dramatic fashion, two days after the Super League announcement, all six Premier League clubs outlined their intentions to withdraw from the project, with those involved at Arsenal and Liverpool apologising to their supporters.

Clubs from Spain and Italy followed a day later, with Juventus chief Andrea Agnelli admitting, when asked if the project could continue, that it was effectively over.

He told Reuters: "To be frank and honest no, evidently that is not the case."

The 15 permanent clubs would have been immune to relegation and therefore guaranteed spots in the Super League permanently.

The European Super League press release read: "The formation of the Super League comes at a time when the global pandemic has accelerated the instability in the existing European football economic model.

"Further, for a number of years, the Founding Clubs have had the objective of improving the quality and intensity of existing European competitions throughout each season, and of creating a format for top clubs and players to compete on a regular basis.

"By bringing together the best clubs and best players in the world, the Super League will deliver excitement and drama never before seen in football."

When will the Super League be introduced?

Super League chiefs were hopeful that the new competition could kick off in August 2021, but it will no longer go ahead following the mass withdrawal clubs.

It is possible that a similar project could be explored in the future, but it could be a long way off now.

What is the Super League format?

The Super League was intended to be similar to the Champions League in that it was a knockout tournament featuring Europe's most elite clubs.

The competition format was set to involve two groups of 10 teams competing in home and away matches played in mid-week. At the end of the first round, the first three who finished in each group would automatically qualify for the quarter-finals.

The fourth and fifth-placed teams would then face each other in a play-off match for the two remaining places in the quarter-finals.

Quarter-finals and semi-finals were to be played on a home-and-away basis, with the final being played as a single-leg fixture at neutral stadium.

The clubs who make up the 15 permanent clubs, however, would be immune to elimination from the competition, even if their performances were consistently poor.

How will a Super League impact the Premier League, La Liga and Serie A?

The Super League stated that its fixtures were to be played in mid-week, the slot traditionally saved for European fixtures as domestic games are played at the weekend.

The vision was that the Super League would be played concurrently with the domestic competitions like the Premier League – as the Champions League has been played – but there were concerns that the top clubs will have virtually less motive to do well in their respective leagues due to the permanency of their participation in the Super League.

The nature of the domestic leagues is to breed competition for a Champions League spot, but with the Super League, that would become irrelevant.

The founding clubs would be guaranteed - in a manner yet to be defined - the certainty of taking part in the richest (and arguably most prestigious) competition, regardless of the results obtained on the field in their domestic leagues. This concept was vociferously opposed by the other clubs in the English, Spanish and Italian leagues.

What has the response to the Super League been?

The Super League has been heavily criticised by prominent football figures and supporters alike, with Gary Neville leading the fans' sentiment with his opposition to the tournament – calling it "pure greed" and even suggesting that sides who have signed the proposals should be punished with a points deduction.

Fans from the participating clubs led protests against the implementation of the Super League, accusing clubs of only caring about the financial rewards and not considering the fans.

Chelsea fans will be protesting the Super League plans in person at the stadium and pulling signs made by them from the stadium. I've seen Liverpool supporters are doing the same. #CFC https://t.co/99beFKKqLh

“I'm not against the modernisation of football competition, but to bring forward proposals in the wake of Covid is an absolute scandal. United and the rest of the big six clubs that have signed up to it should be ashamed of themselves, Neville told Sky Sports.

“It’s been damned and rightly so. I’m a Man Utd fan and have been for 40 years. I’m disgusted with Manchester United and Liverpool most.

“Liverpool, they pretend ‘You’ll Never Walk Alone’, the people’s club, the fans’ club. Man Utd, 100 years born out of workers around here and they’re breaking away into a league without competition, that they can’t be relegated from.

“It’s pure greed. They’re imposters. They’re nothing to do with football in this country. There’s 100 years of history in this country from fans that have lived and loved these clubs, and they need protecting. 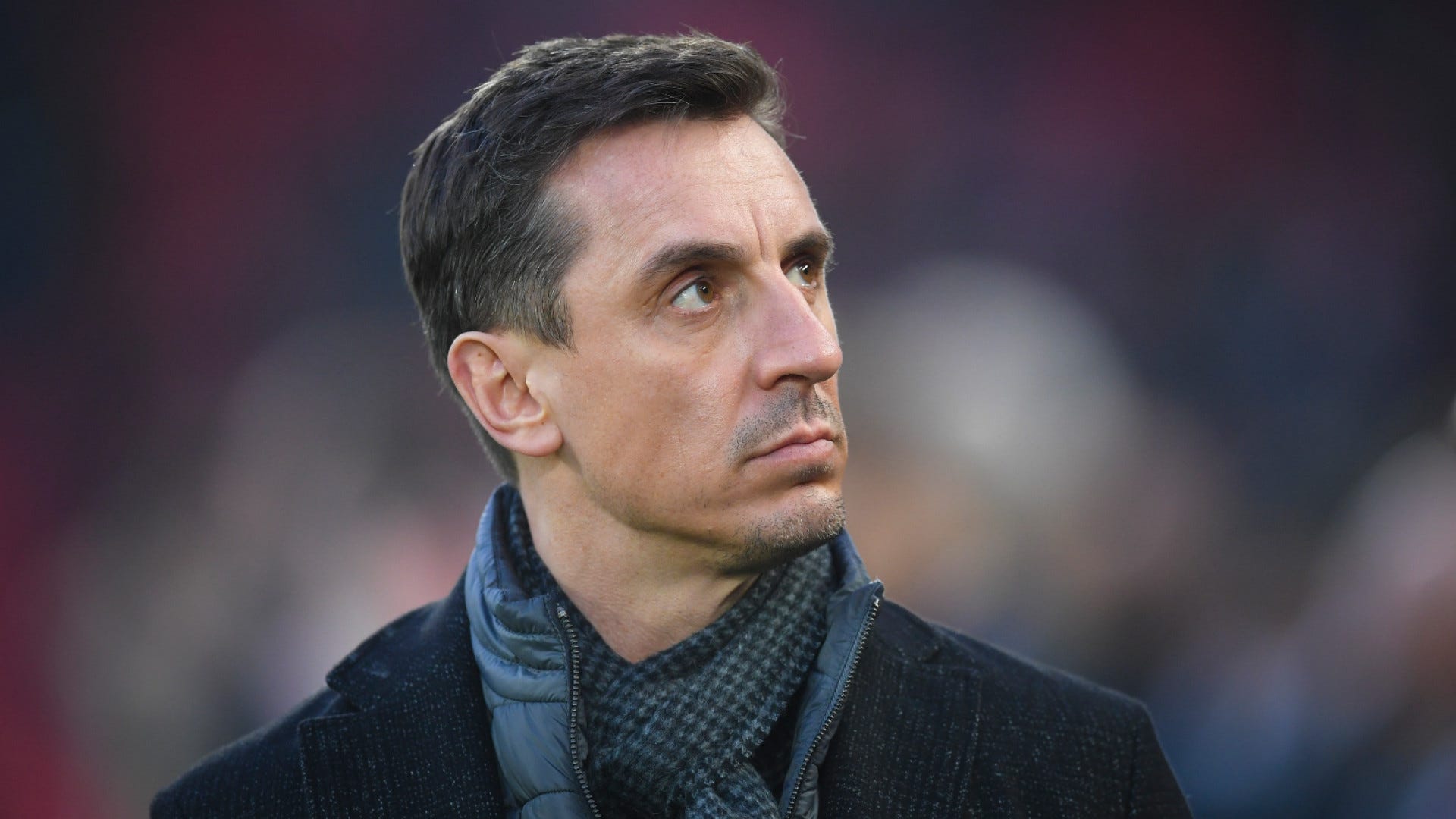 "We are all united against this nonsense of a project. Cynical plan, completely against what football should be. We cannot and will not allow that to change," said Ceferin.

"Players who will play in the teams that might play in the closed league will be banned from the World Cup and Euros. We urge everyone to stand tall with us as we do everything in our power to ensure this never ends up in fruition."

Participating clubs would also need the green-light approval of the associations who govern the domestic competitions to allow them to join the breakaway tournament.

The Premier League also condemned the plans, with Premier League chief executive Richard Masters stating in a memo to all 20 clubs: "I cannot envisage any scenario where such permission would be granted."

An official UEFA statement read: "We will consider all measures available to us, at all levels, both judicial and sporting in order to prevent this happening. Football is based on open competitions and sporting merit; it cannot be any other way.

"As previously announced by FIFA and the six Confederations, the clubs concerned will be banned from playing in any other competition at domestic, European or world level, and their players could be denied the opportunity to represent their national teams."

Super League president (and Real Madrid chief) Florentino Perez laughed off the suggestion that players could be banned, however, arguing that the law protected against such a punishment.

What is the lure of the Super League?

Participants of the Super League would arguably be granted lucrative and significant financial rewards if they were allowed to play with the most superior clubs in the world on a more regular basis – more so than the Champions League.

Through breaking off of their national competitions and forming a league where only the most elite players were to partake, the Super League could possibly compete with the NFL and NBA and benefit from huge television rights deals.

What will happen to the Champions League?

The Super League would effectively doom the Champions League, as the UEFA's premier club competition would without their biggest sides if the breakaway tournament ever formally began.

It could severely diminish the appeal and romance of the Champions League, which has always been the most prestigious European domestic club competition.

When asked if the Champions League would still exist even without the big 12 clubs, however, Ceferin stated: "The answer is yes, of course.

"In Europe, there are many good clubs, many devoted fans and we already approved the changes for European club competitions post 2024. We will do it with or without them."