The Argentine wizard could walk into any team in the world, which makes his lack of real options amid the Camp Nou crisis all the more puzzling

The dust has barely settled since Barcelona's meltdown against Bayern Munich on Friday, but Camp Nou is a hive of activity as everyone at the club, from president Josep Bartomeu to defender Gerard Pique, attempts to make sense of that historic Champions League defeat.

One man, however, has been conspicuous in his silence.

Lionel Messi may be the Barca captain, but the Argentine has offered not one public utterance, fuelling talk that, at 33, he has reached a crossroads at which no path appears particularly attractive.

Messi's loyalty to Barcelona is beyond reproach.

The Catalan city has been his home since he arrived at the age of 13 from Rosario, and the two decades that have passed have been hugely beneficial to player and club alike.

Barca provided Messi with the platform needed to become the greatest player of his and perhaps any generation, as well as financial rewards beyond his wildest dreams.

Messi, meanwhile, helped transform the club into a sporting and commercial colossus by wowing fans across the globe on a weekly basis with his wonderful array of skills.

However, he must be now wondering if it is time for a parting of the ways. There have been setbacks before, of course – the 7-0 aggregate loss to Bayern in 2013; the 3-0 losses to Juventus and Roma in 2016 and 2018, respectively; the shocking 4-0 capitulation at Anfield last year – but nothing like Lisbon.

Indeed, this latest collapse feels different. Not just because the margin of defeat, 8-2, was even more inflated than those previous catastrophes; it was more the sense of inevitability which surrounded the defeat, with the Catalans powerless to answer Bayern's incessant, pitiless offensives.

As early as half-time, Messi was pictured desolate, head in hands, alone in the dressing room, the sad symbol of a side has become a shambolic mess on and off the field. 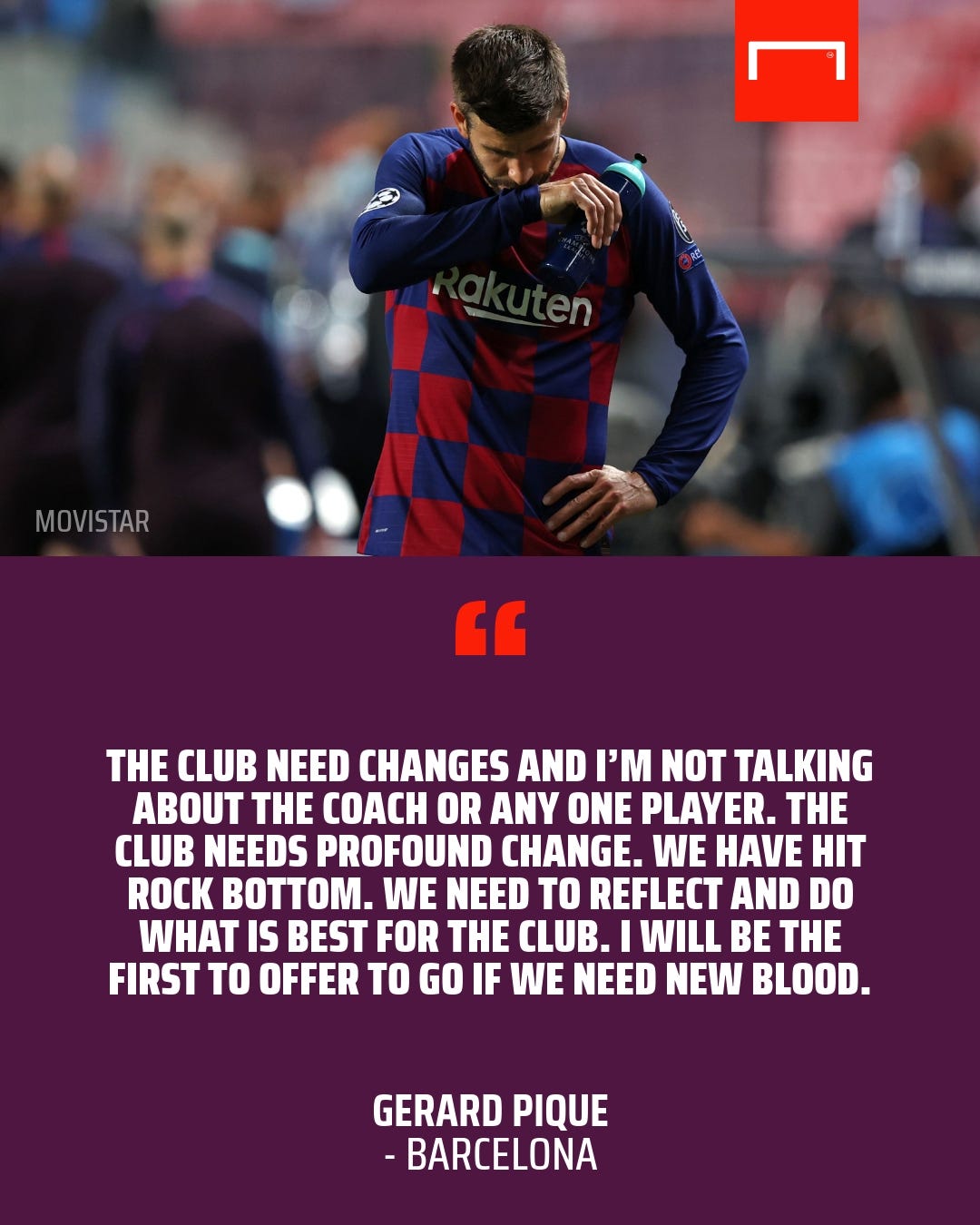 After the match it was Pique, not the skipper, who faced up to the press.

"It was a horrible performance and it leaves us with a terrible feeling,” the defender confessed to Movistar. "The club need changes and I’m not talking about the coach or any one player. The club needs profound change.

"We have hit rock bottom. We need to reflect and do what is best for the club. I will be the first to offer to go if we need new blood."

Blood is already running through the halls of Camp Nou.

Coach Quique Setien was the inevitable first casualty, his eight-month tenure – which will go down as one of the worst in club history – coming to a forcible end on Monday. He has been replaced by ex-Barca hero Ronald Koeman, whose reign looks doomed from the outset.

Technical secretary Eric Abidal, the man charged with sacking the hapless Setien, followed him out of the door, having seen his administration of the Barcelona squad – and, just as significantly, his relationship with Messi – come under intense scrutiny due to the missteps of the last 12 months.

Erstwhile team-mates and close friends, the relationship between Messi and Abidal was soured when, following Ernesto Valverde's sacking at the start of 2020, the ex-full-back told Sport that “many players were not happy or working hard.”

That statement provoked a furious outburst from the Argentine and, while no explanation has been offered from either Abidal nor the club over his departure a matter of hours after appearing to assume a key role in post-Bayern rebuilding, there will be no few observers who read the move as an effort to keep Leo happy and committed to Barca.

Brazilian journalist Marcelo Bechler's revelation that Messi is seeking an immediate exit from Camp Nou did not fall on deaf ears. The Barca board read the bombshell as an ultimatum from the Rosario native, even if the prospect of any move – which would naturally be one of the biggest in football history – taking place in this stilted, coronavirus-affected transfer window is extremely slim. 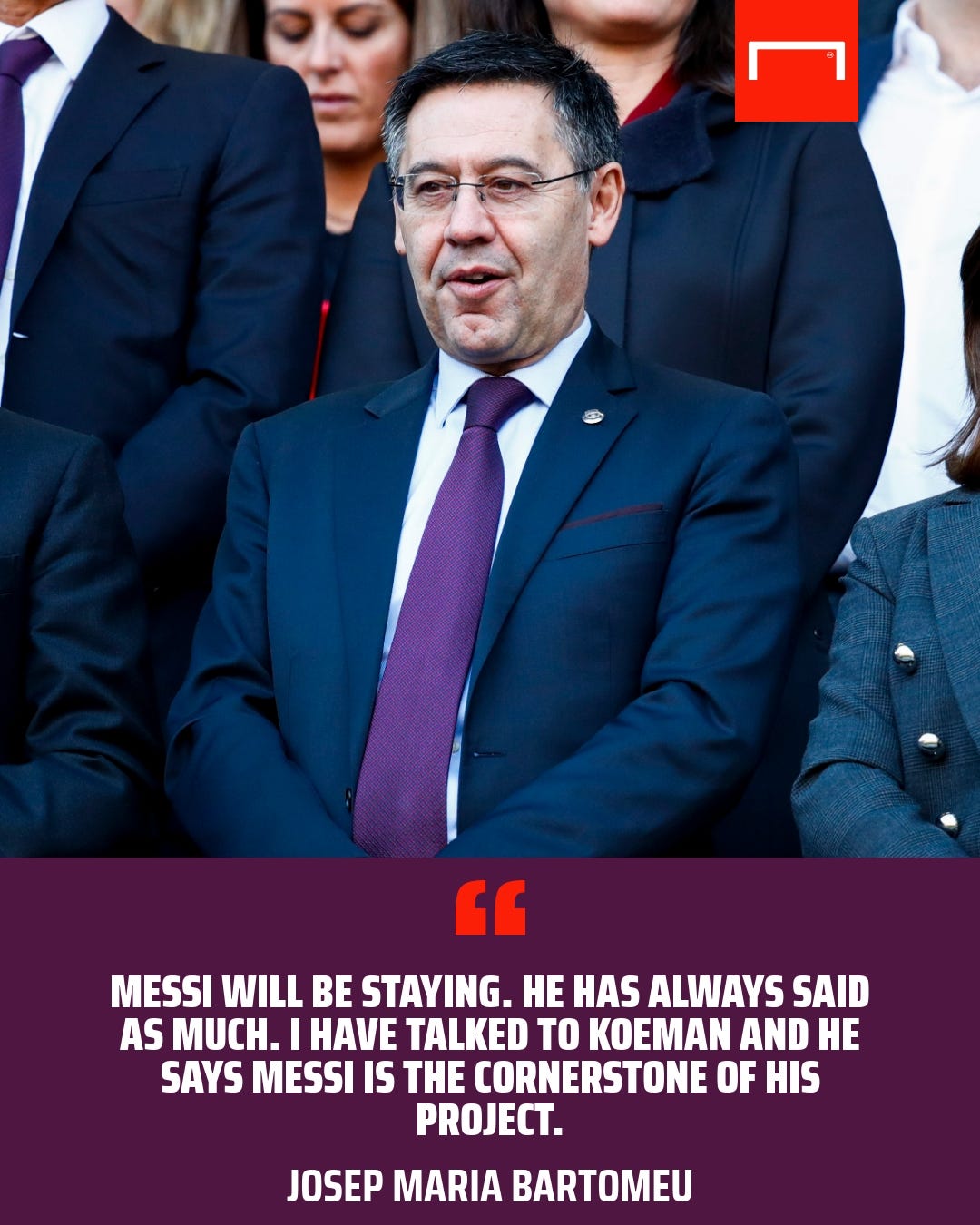 Messi despises defeat. It rankles with him, tortures and infuriates him. After both Argentina's 2014 World Cup reverse and their subsequent Copa America disappointments he was left seething, only to come back on each occasion a better, more determined player and reach new heights. Barca are banking on weathering this latest storm and welcoming him back once more for 2020-21 as the club's captain, standard-bearer and talisman.

The immediate outlook for the coming season nevertheless appears bleak for the Catalans. Bartomeu resisted calls to step down following the Bayern disaster and will hold on until the club's statute requires him to hand over to March's election-winner at the end of 2020-21.

The reason is simple: the board must cover the huge deficit accrued over the Bartomeu administration and deepened due to the coronavirus crisis.

To reach that goal Barcelona will have to trim the club's bloated first-team squad and engineer hefty sales without over-spending in the next two windows, a risky venture given the team's evident weaknesses.

Bartomeu admitted as much on Tuesday, telling Barca TV only Messi, Marc-Andre ter Stegen, Antoine Griezmann, Ousmane Dembele, Nelson Semedo, Clement Lenglet, Frenkie de Jong and Ansu Fati are "untouchable" – the rest would be allowed to leave should the right offer come in.

The Argentine, Bartomeu added, "will be staying. He has always said as much. I have talked to Koeman and he says Messi is the cornerstone of his project."

Messi, then, looks set to continue on his path at Barca until 2021 with little enthusiasm and, in the face of the expected clearout, even more pressure to perform on his shoulders. In the club's favour, however, is the fact that elsewhere his options also appear limited.

A potential move to Inter appears impossible outside of the fevered imagination of a handful of Nerazzurri executives, past and present, given the budget constraints shackling almost every elite club in Europe.

It is hard to see any suitor presenting Leo with either a financial package to match his €70 million (£63m/$83m) annual gross salary or an on-field project sufficiently attractive to lure him away from his home of 20 years. 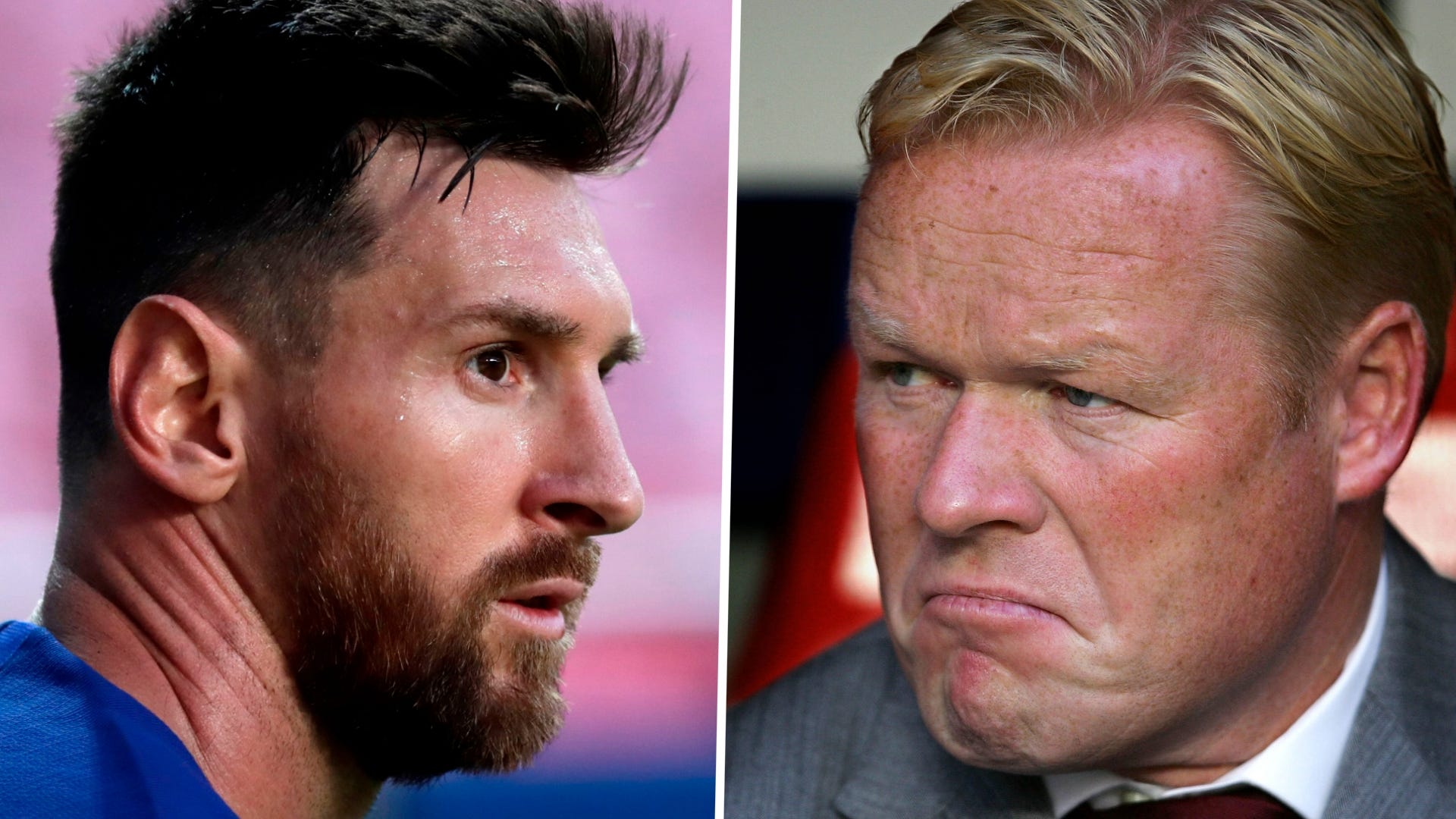 Perhaps only Newell's Old Boys, Messi's boyhood idols, possess the tools to convince the star to forego such riches and return where it all began. But if personal considerations keep the Rosario club permanently on the horizon, they also form an insurmountable obstacle.

“It is my dream to see Leo at Newell's, but it is complicated. Imagine Messi playing in the derby, his kids have to go to school... the city is an inferno,” the player's cousin Maxi Biancucchi admitted to La Capital in May. “If it was not for the crime, I'd have no doubt he would play in Argentina.”

Rosario remains in a state of tension through years of conflict between rival drug gangs and suffers endemic street crime – as recently as May local footballing legend Trinche Carlovich was murdered in a botched mugging, one of over 100 homicides committed in the city in the first half of 2020 alone.

The prospect of Messi exposing his three young children to such an environment on a permanent basis is faint, to say the least.

Only one destination remains as even a slight possibility, albeit one shrouded in conjecture and uncertainty.

Pep Guardiola would jump at the chance to add Messi to his Manchester City ranks, and has the standing and respect with the Argentine to make such a transfer happen.

But Pep himself could well walk away from the Etihad Stadium when his contract expires, like Leo's, in June 2021. The next 12 months are likely to see Guardiola and Messi presented with the opportunity of a reunion from both interested parties, a curious high-stakes poker game which Barca in particular cannot afford to lose.

Messi will be 34 next summer, an age where most players have already begun their decline. So far there has no sign of that mortal affliction in La Pulga, who continues to smash records and lead the way for his club with precious little aid elsewhere on the pitch.

But even he must one day sit down and take stock, and decide whether he wants to see out his elite career treading water at a club ridden by crisis – or break new ground.

The onus will be on Leo to decide which road to take at this crucial juncture – and on Barca to get their house in order and break the damaging pattern of the last few seasons which has seen them squander one of the finest talents football has ever produced.