There has been a lot of talk about where the Red Devils star is best deployed, so we've taken a look

Is Marcus Rashford a centre-forward or is the Manchester United man a winger?

The question of where on the pitch the Red Devils attacker is best utilised is one that has persisted ever since he burst onto the scene at Old Trafford as a precocious teen in 2015.

It's a dilemma that lingers from the perspective of the England manager too, with decisions to be made about which player should lead the line if the first choice, Harry Kane, is unavailable or out of form.

Goal takes a look at the data and the opinions - as well as that of the player himself - to find out which position is Rashford's best.

What is Marcus Rashford’s best position?

Marcus Rashford is a forward, capable of playing anywhere across the attacking line with varying degrees of effectiveness.

If you play FIFA 21 you'll be aware that Rashford's strongest position in that game is 'LM' or left midfielder. Essentially, that means he is best as a wide-left midfielder or left-winger, usually as part of a front three. Thanks to his speed and finishing attributes, he is also highly adept as a centre-forward or on the right side as a wide midfielder or winger.

Does the virtual assessment of the EA Sports gurus hold up in the real world though?

Well, yes, actually. In the seasons from 2015-16 to 2020-21, the stats suggest that Rashford is a much more potent threat when played on the left-wing as opposed to upfront as a traditional striker.

While the percentage of goal involvements in each position are similar across the period of 2015-16 to 2020-21, Rashford is involved in slightly more goals when he's on the wing and contributes a greater proportion of assists from that position.

Rashford played mainly as a centre-forward in his breakthrough season in 2015-16, with Louis van Gaal giving him a chance to impress as a Number 9. When Jose Mourinho took the reins in 2016-17, he was used as a striker and a winger interchangeably.

At the beginning of Ole Gunnar Solskjaer's tenure from 2019, the Norwegian coach appeared to favour the player through the middle, but soon changed approach by switching him to the left, with Anthony Martial and later Edinson Cavani preferred in the centre.

Indeed, Rashford's best individual season came in 2019-20, when he scored 22 goals across all competitions. Of those 22 goals, 18 were scored when he played as a left-winger, while he also provided more assists. He has surpassed 20 goals again in 2020-21, a consecutive achievement not previously experienced in his career.

So, cutting in from the left flank onto his stronger right foot is where Rashford seems to play best.

What do the experts say about Rashford's best position?

The debate about where Marcus Rashford is best deployed for Manchester United and England has produced a variety of opinions.

Manchester United legend Ryan Giggs argued in 2017 that Rashford's best position was as a central striker, telling PA Sport: "He's just so quick and direct. His best position, really, is through the middle, coming up with the goods and he is just an exciting player."

However, as time has progressed, more people are now convinced that he is better out wide. In 2019, for example, former Manchester United boss Jose Mourinho, who played Rashford as a Number 9 in the 2017 Europa League final victory, has indicated that the England international is more effective as a winger.

He told Sky Sports: "I am not going to say he cannot ever be a number nine, he can be a dangerous number nine especially if the opposition is not pragmatic, is not close and is giving spaces to attack. He can be dangerous in transitions.

"But when Manchester United is a team that normally plays against teams who go to Old Trafford, close the door, bring the bus, bring the double bus, he is not a striker to play with his back to the goal."

Mourinho added: "Playing from the sides he can be a very good player, probably better than at nine. But he feels he is a number nine and I think the club and the manager feel he is." 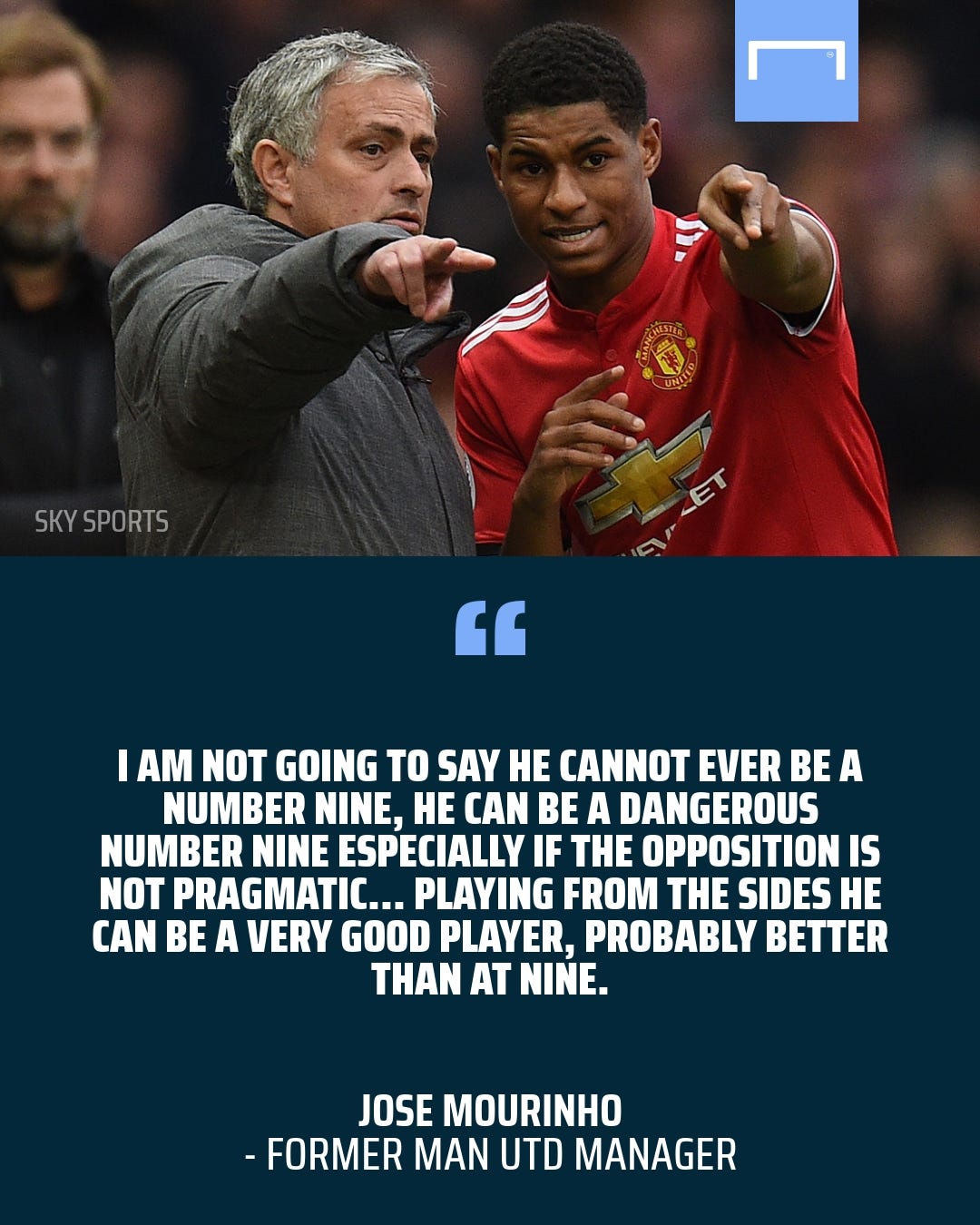 Another former Red Devil, Michael Owen, who knows what it takes to be an effective goalscoring striker, expressed the view in 2020 that Rashford was at his best when playing on the wing.

The Ballon d'Or winner told Amazon Prime: "I think this suits him - I never thought he was a centre-forward, a central player, I don’t think he ever really played that in youth football. I think he always wanted to be a number 10 or a wide player, and I think it suits him."

Manchester United academy coach Colin Little, who coached Rashford in the youth team, has described the forward as a "raider" - a type of inside forward who defends from wherever they are on the pitch.

"He's played as a No.9 but modern-day forwards end up in wide areas and beat people," Little told the club website in 2021.

"They're not always as comfortable with their back to goal as they were playing in a 4-4-2 in my day. Then they could lay things off and spin in behind.

"Ultimately, they have to score some goals because you're not really classed as a forward if you don't score."

What does Marcus Rashford think his best position is?

Rashford seems to be reluctant to identify which position is his best, preferring to emphasise and enhance his versatility as much as possible.

In a 2021 interview with Goal, he said: "Throughout my academy days, I always tried to train myself to play in all three of those positions up front, just to give myself a better chance of getting into the first team.

“If you have a player who can play in more than one position, then you’re more likely to be involved. It’s something I always dreamed of doing and now the manager is giving me an opportunity to do that.

"I still think I can improve and do better but I’m pleased that I’ve managed to influence games in different positions and help the team win games."

The truth is, he seems to enjoy his football most when he is allowed some flexibility in his role - perhaps as a roaming forward, akin to Little's aforementioned 'raider'. 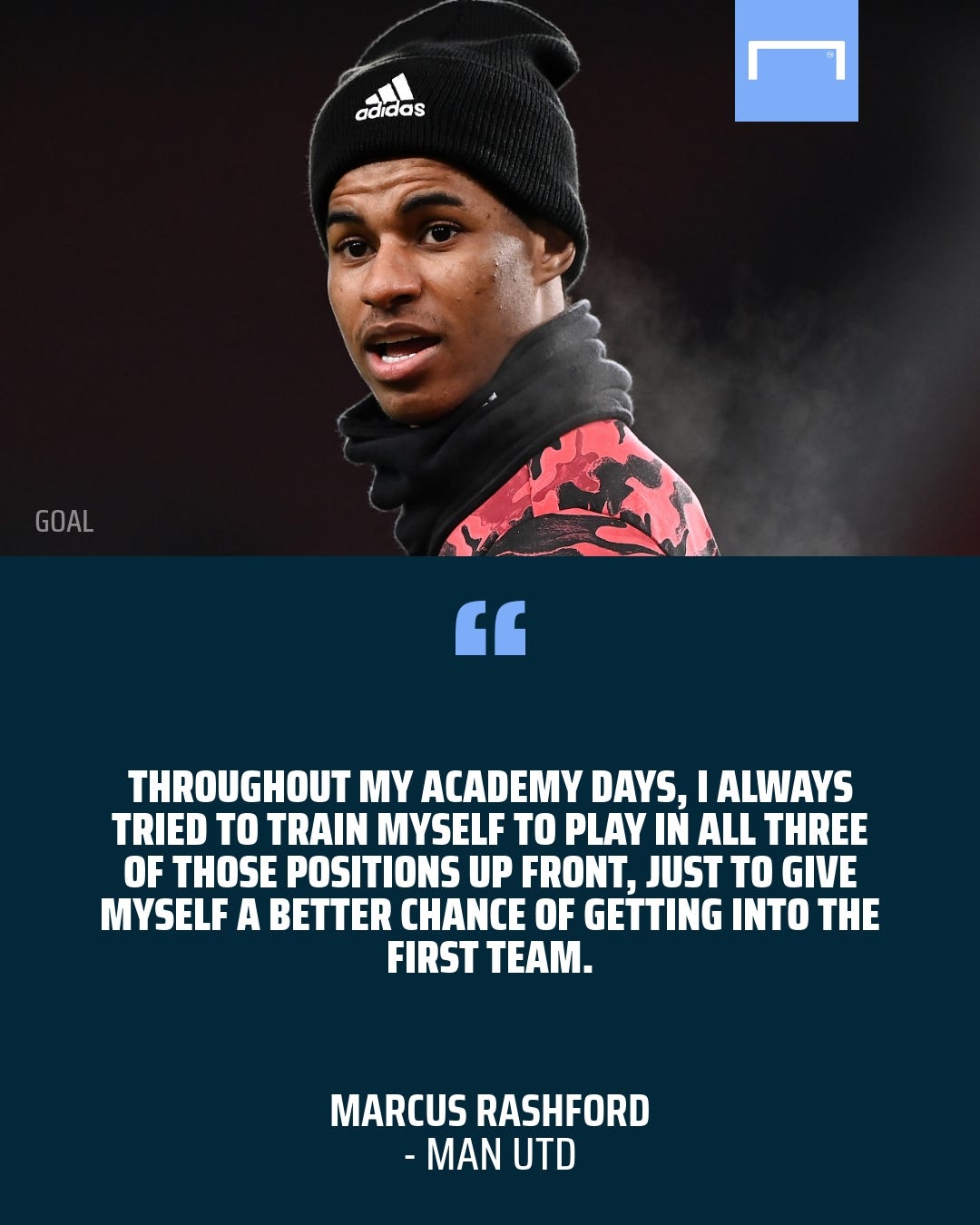 Reflecting on his success playing on the left-wing in 2020, Rashford conceded that he has struggled in the past with the Number 9 role.

"When you are on the left, you can create a lot more things on your own, giving that little bit more to the team," Rashford told the Manchester United website. "Whereas when you are playing up front, sometimes you are isolated and need someone in midfield who can find passes for 90 minutes of a game, so you can disappear in games sometimes as a Number 9.

"When I transitioned to a Number 9 when I was younger, that's the bit that I struggled with as I was always someone who wanted to express myself on the ball.

"When I started playing Number 9, I realised that you don't see the ball as often as you do in other positions, but when you do see the ball, it's an opportunity to score goals.

"That's what I loved about being a Number 9 and that's what I still love about it. But right now I'm enjoying having the freedom to mix between the two - and I think it suits us well at the moment as Anthony [​Martial] likes to drift to the left and drop deep as well."