The Argentine coach has never hidden his admiration for the all-action Uruguayan, who has just joined Atletico Madrid from Barcelona

The news that Luis Suarez had been caught up in an Italian citizenship scandal barely raised an eyebrow at Barcelona, a club that has become accustomed to events that border on the farcical in recent years.

The doubts over the legitimacy of the results of his language exam put an end to the Uruguayan's hopes of lining up in Serie A this season, although his chances had already diminished as Juventus withdrew their interests in the striker's services days before suspicions were first raised over Suarez's level of Italian.

Juve's loss has turned out to be Atletico Madrid's gain, though, as the Bianconeri's decision to sign Alvaro Morata paved the way for a €6 million (£5.5m/$7m) transfer and the forming of a trans-Rioplatense partnership that appears to be a match made in heaven.

Atletico coach Diego Simeone has long been a huge admirer of the pugnacious Suarez.

Having been hamstrung for much of last season in attack by the sale of Antoine Griezmann and the failure of Diego Costa and Morata to compensate for the Frenchman's goals, the Argentine has managed an impressive coup by bringing one of the world's most accomplished, seasoned – not to mention controversial – forwards across La Liga to the Wanda Metropolitano.

At 33, Suarez may be in the autumn of his outstanding career, but he has the talent and, most importantly perhaps, the drive, work-rate and aggression to revitalise Atletico's stagnant forward line. Not that El Cholo will need much convincing that his new signing has what it takes to succeed in the capital.

“I could not speak ill of Luis Suarez, he is extraordinary,” Simeone explained to reporters as early as 2013, while the forward was still at Liverpool.

Even when Suarez joined Atleti's rivals the following year the praise kept coming, with the coach stating in November 2014: “When Luis Suarez finds the role his trainer wants for him, he is an intense player who will give his team that extra boost they need.

“He is a marvellous player, tremendous, extraordinary, strong, aggressive, intense. He assists and scores from all over the pitch.” 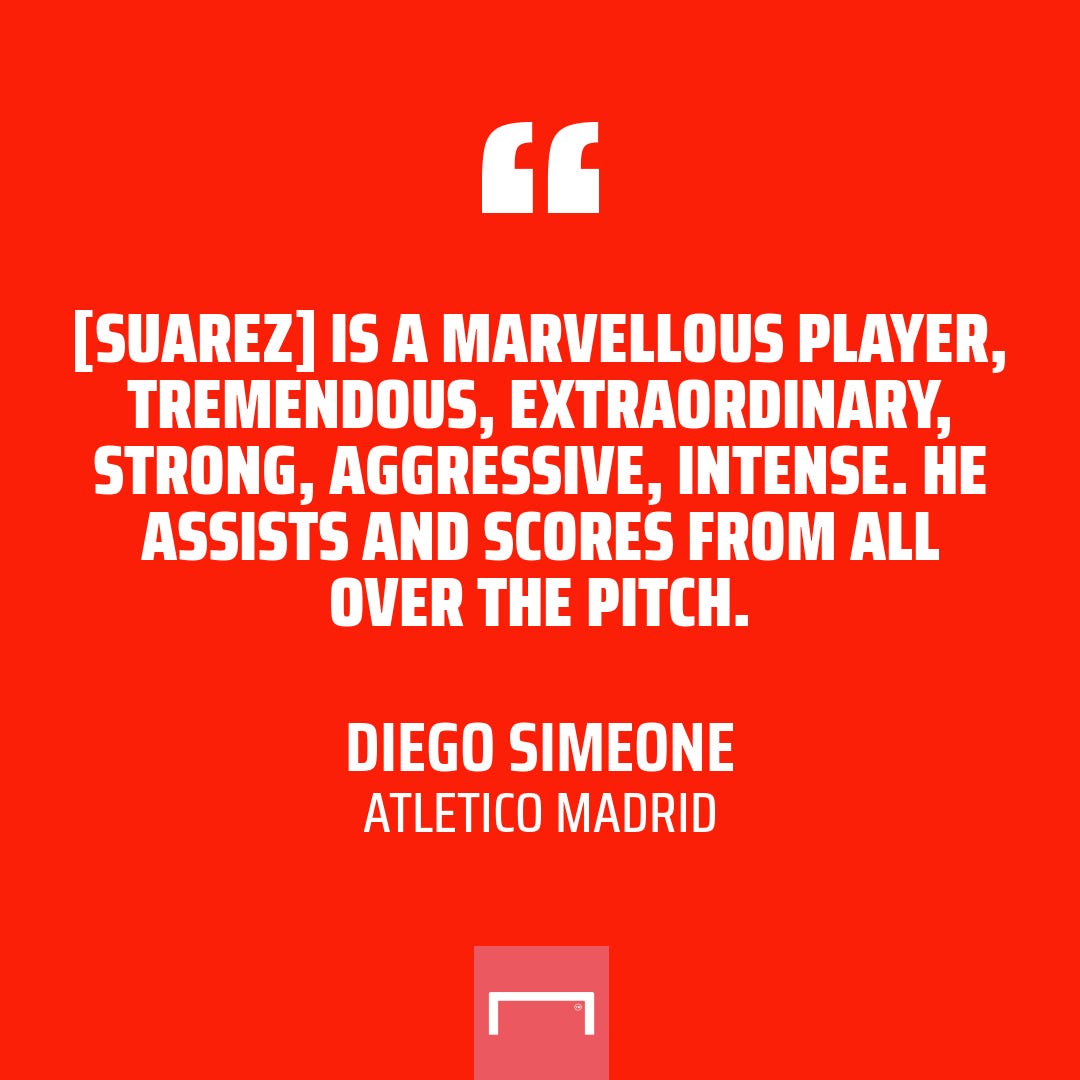 Atletico were reluctant to sign a costly 33-year-old striker when Suarez came on the market, but El Cholo pushed for his signing and eventually got his way, as he usually does.

That only left the forward himself to convince; a task similarly achieved with a series of personal calls from coach to player, culminating in this meeting of minds that brings together two men who love to operate on the very limits of the game, and more often than not beyond them.

The ex-Liverpool and Ajax star had been linked with Atletico, then reigning Liga champions, prior to the 2014 World Cup as a replacement for Chelsea-bound Diego Costa.

Barca, desperate to reinforce at all costs after finishing empty-handed that season under Gerardo Martino, beat their rivals to the signing, and over the intervening six years Suarez has paid back their faith handsomely, smashing 198 goals in 283 games and lifting 13 major titles as the perfect foil to superstar Messi in attack and a Blaugrana idol in his own right.

When new Barca boss Ronald Koeman informed Suarez that he would not form part of his plans in 2020-21, it thus came as a surprise to nobody to see Atleti enter the chase.

Some Barcelona directors argued against allowing one of the greatest goalscorers of the modern era join one of their likely title rivals at a knockdown price, and it's easy to understand why.

The Colchoneros might just have acquired the cutting edge in the final third that has so often been lacking as a complement to their rock-solid defensive play.

As for the player himself, he the chance to avoid uprooting his young family after six happy years in Spain and to prove he still has plenty left in the tank under a coach that, in terms of aggression, intensity and, of course, that natural inclination to gripe, grouse and cajole at the slightest provocation, is very much cut from the same cloth.

Not that Suarez should expect an easy ride at his new home, of course.

He has thrived under the luxury of having the world's best player at his side throughout his time at Camp Nou feeding him chances, a privilege which will not be afforded with the same frequency when lining up with Atletico's accomplished but decidedly more down-to-earth talents. 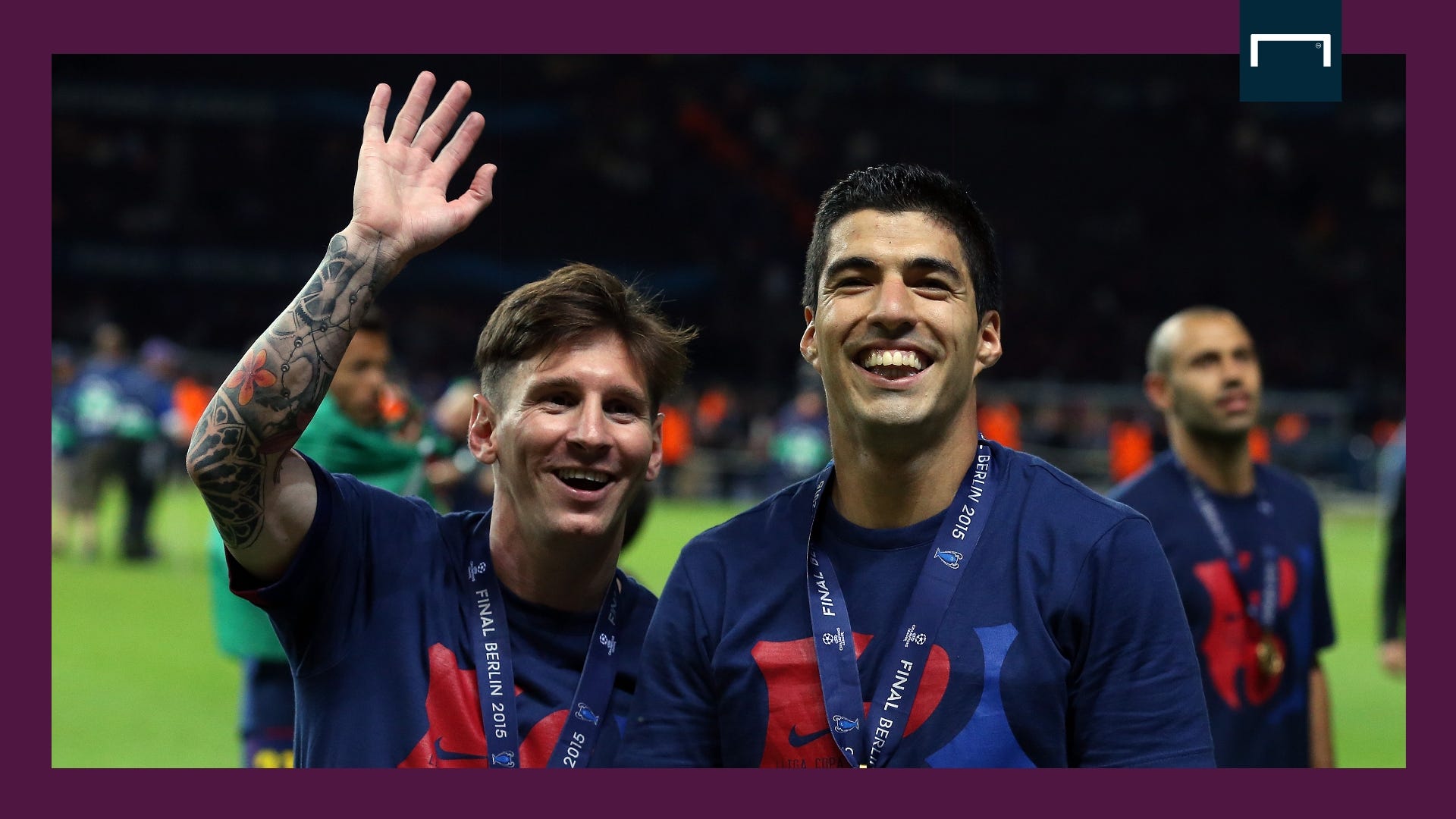 The onus will be on Suarez to harry and chase and run for the entire 90 minutes as Simeone demands of all his charges, and one can well imagine the first few days going through his paces under the gaze of such a strict taskmaster as El Cholo could prove quite the shock to the system.

It is not a role, however, to which Suarez is unaccustomed. The striker has vast experience of battling defenders in solitude at the head of Oscar Tabarez's well-drilled Uruguay teams, for whom attack is often a four-letter word.

Unlike his great friend Messi, he does boast an international title, the 2011 Copa America, gained while working in a squad and system that invites easy comparisons with Simeone's Atletico battlers.

Atletico, as witnessed in their timid Champions League exit to RB Leipzig back in August, are not the force they once were at the height of the Simeone era.

But the squad remains strong and balanced, while the likes of Costa, Yannick Carrasco, Joao Felix and Angel Correa provide plenty of potential attacking partners for Suarez to click with once he gets the motors running at his new club.

Above all, both Suarez and Simeone are intensely competitive souls, who will do anything within the laws of the game – and often without – to prevail.

Their mutual respect and admiration are clear, and it will be fascinating to see how that translates on the pitch as the veteran adds his unique abilities to the Atletico machine – a combination fit to strike fear into the very hearts of their opponents.

This match made in heaven could make life hell for everyone else in La Liga.