Diego Maradona once said that his enduring fame owes much to the 'Hand of God'.

"That goal became part of soccer history," he wrote in his autobiography. "There are still 10-year-old kids out there today with 'Maradona' on their backs.

"And that kind of insanity can only be explained by one goal.

Indeed, it is impossible to discuss Maradona's first goal for Argentina in their 2-1 win over England in the quarter-finals of the 1986 World Cup without almost immediately mentioning his second.

The two are bound together in footballing folklore, perfectly contrasting examples of the ingenuity of the most polarising personality the game is ever likely to see.

Maradona was the quintessential troubled genius, a man blessed with a gift that cursed him with a level of fame which he found himself unable to handle.

Were he playing today, he would undoubtedly benefit from more protection from referees – and arguably from himself.

"In our era, footballers didn't get the support they needed," ex-England international John Barnes tells GOAL. "So, you had lots of players like Maradona back then who were considered a bit crazy.

"Now, though, I think that with the support and discipline inherent in the modern game, you don't get players like that anymore."

You don't get goals like the 'Hand of God' anymore either. With VAR, Maradona's opener against England would have been swiftly disallowed.

There may not have been as many cameras at the Azteca Stadium in Mexico City on June 22, 1986 as there would be at an average top-flight game today, but it was clear to many of those watching in real time that Maradona had used his hand to flick the ball past the onrushing Peter Shilton and into the net.

"We all saw it," Barnes said. "All of us on the bench – the players, the coaches, the manager – we all saw it clear as day. We all knew he'd handled the ball, so we just couldn't believe the referee hadn't seen it." 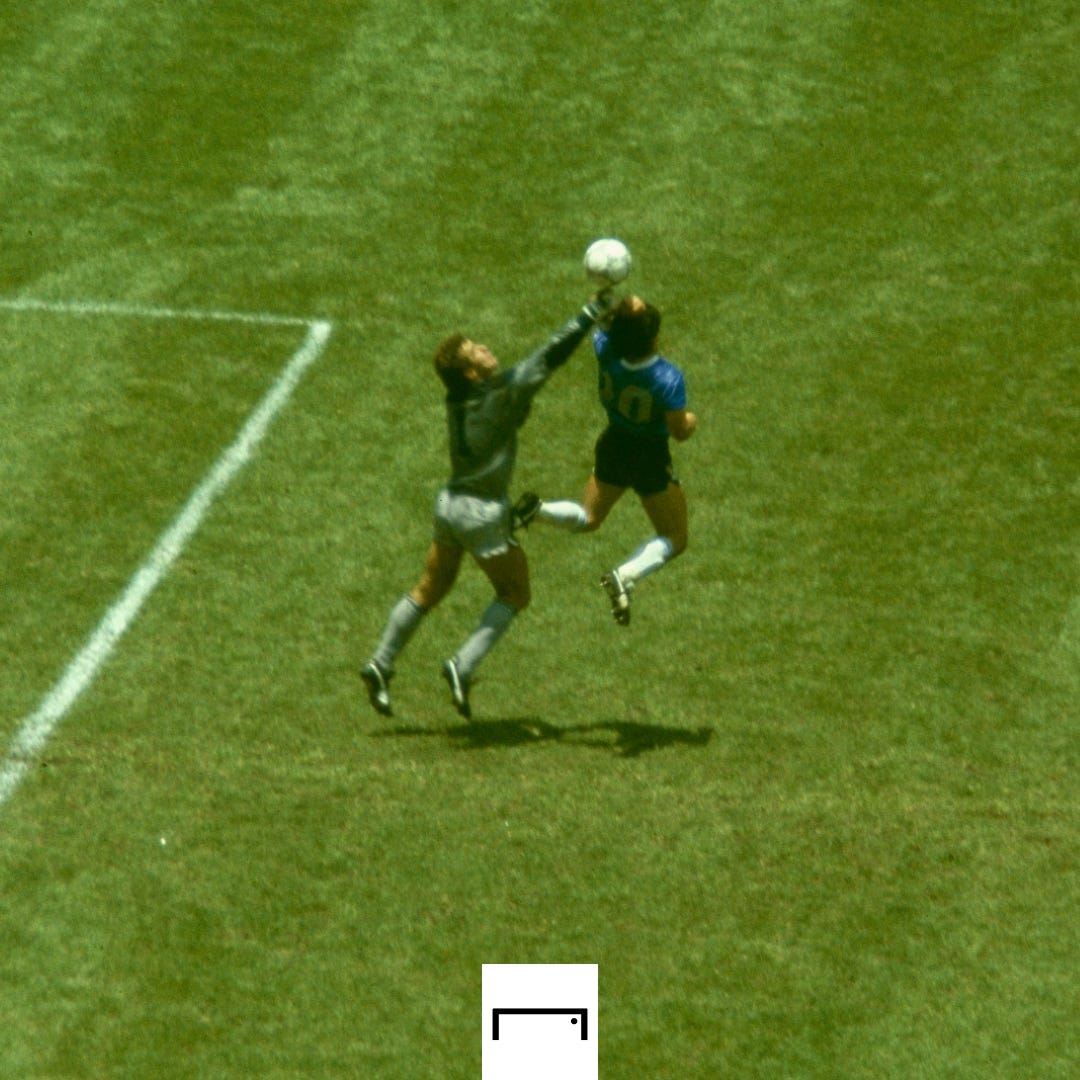 Ali Bin Nasser has never blamed himself for failing to notice Maradona using his left hand to beat the onrushing England goalkeeper Shilton to a miscued attempted clearance from Steve Hodge in the 51st minute of the game. The Tunisian official has always insisted that he was let down by his linesman, Bogdan Dochev.

“If you look at the match, you can see that Dochev was in a better position,” Bin Nasser told Olé in 2001.

"I had my doubts, but when I saw that the linesman was running toward the centre circle, I gave the goal because I was obliged to follow FIFA's rules [that the decision of the official with the better vantage point should take precedence]."

In Bin Nasser's defence, not everyone watching was sure what had happened either. Commentator Barry Davies, who was covering the game for the BBC, had initially thought that England's players were appealing for offside.

Terry Fenwick, though, had seen the handball clearly and he raced up to the halfway line to remonstrate with Bin Nasser. However, only Glenn Hoddle was as visibly incensed as Fenwick, which bemused Argentina defender Oscar Ruggeri.

"Imagine if it had been the other way around," Ruggeri says to GOAL. "We would still be chasing the referee today!

"But some of them, like us, probably thought Diego had beaten the goalkeeper to the ball with his head. Diego even told us that it had been a header! It was genius how he ran off celebrating.

"Myself and Tata (Jose Luis Brown) at the back didn't have permission to celebrate goals at the other end of the field because it would have meant an 80-metre sprint at altitude in insane heat.

"But Diego told the other guys, 'Celebrate, hug me!'"

Indeed, Maradona was initially worried that one of his own team-mate's bemused reaction to such a blatant foul might result in his 'header' being disallowed.

"Checho (Sergio Batista) came over and asked me 'You knocked it in with your hand, right? Did you use your hand?'" the legendary No.10 wrote in 'Touched by God'.

"And I answered, 'Shut the f*ck up and keep on celebrating!' We were afraid they would disallow the goal but they didn't."

Maradona always remained unrepentant, partly because of the opposition that day. The quarter-final was played just four years after the Falklands War, which Argentina and the United Kingdom had fought over two British-dependent territories in the South Atlantic.

The Albiceleste captain had insisted in the build-up that the game was "only about football" but both Argentina striker Jorge Valdano and England counterpart Gary Lineker have subsequently admitted that it was impossible for both sets of players to ignore the bitter political backdrop. 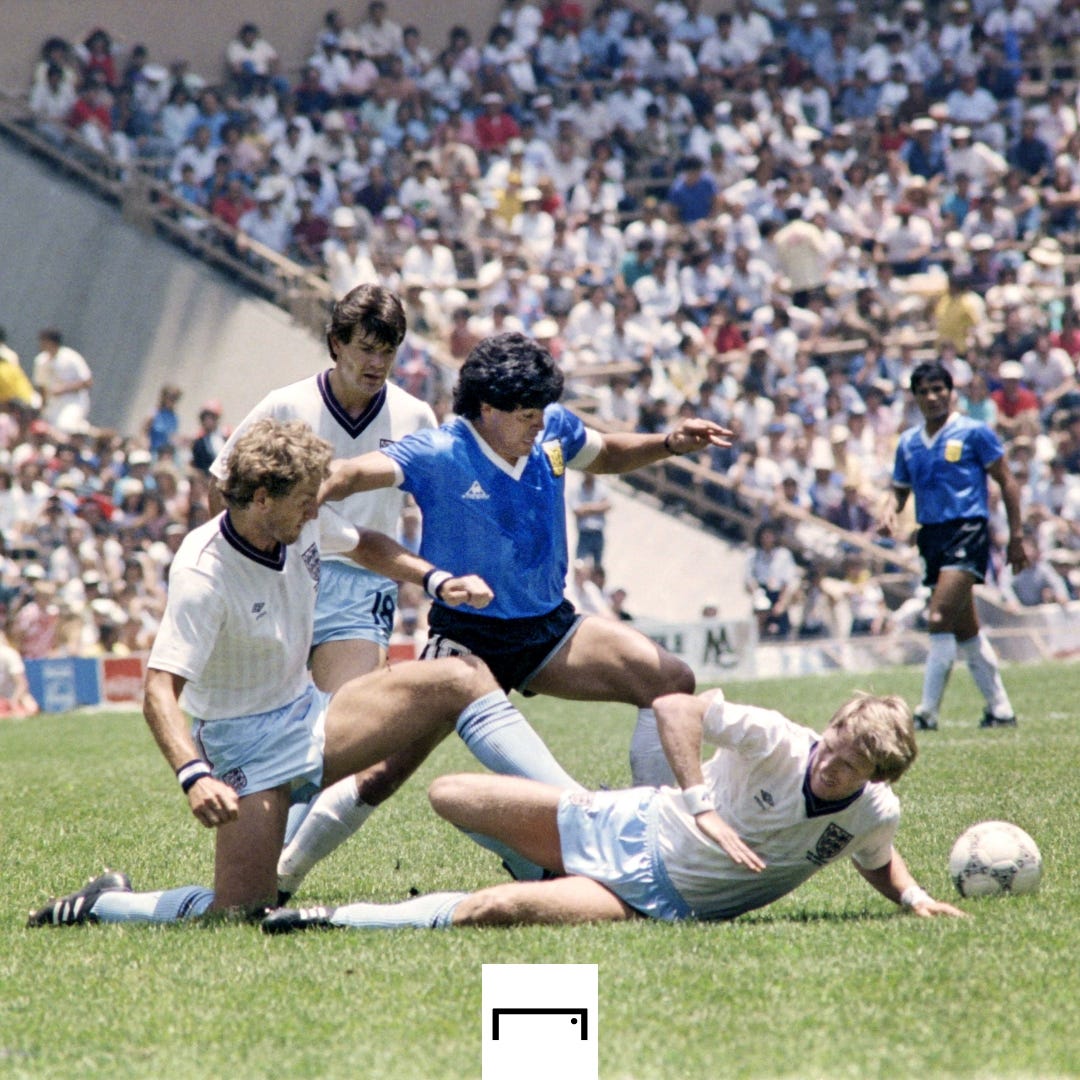 Maradona himself admitted in Asif Kapadia's documentary on the Argentine's career that beating England was "a beautiful feeling, a type of symbolic revenge against the English" for the loss of las Malvinas.

He has also claimed that he told his team-mates that he felt no shame about the deceitful nature of 'The Hand of God', as he christened it afterwards.

"I said to them: 'Those who steal from a thief are entitled to 100 years of forgiveness'," he explained on his TV show 'La Noche del 10'. "And the English had done a lot of things to us..."

The politicisation of the goal upset Shilton, who even turned down an invite to attend the premiere of the Maradona documentary last year.

He remains incredibly bitter about the fact that he will remain forever tied to the most memorable act of cheating in football history, primarily because he never received an apology from the perpetrator.

"After 30 years in the game there are a few things I’m really proud of," Shilton told The Guardian.

"The three that really matter are the most competitive games in professional football because it shows my longevity.

"Winning 125 caps for England sits alongside it and the other one is the joint-record of [most clean sheets in international football] along with Fabien Barthez.

"That obviously would have been my record if it hadn’t been for a certain Mr. Maradona...

"I did everything I could to stop that handball and the famous photo shows that I’m closer to the ball than his head. That’s why he punched it in with this hand.

"You always have people saying: ‘Oh, he out-jumped you.’ He didn’t out-jump me. He cheated.

"So, to be associated with that moment..."

Shilton has even argued that England's players were still in a state of shock when Maradona scored his wondrous second goal just three minutes later, when the diminutive attacker slalomed his way through nearly the entire England team after picking up possession on halfway. 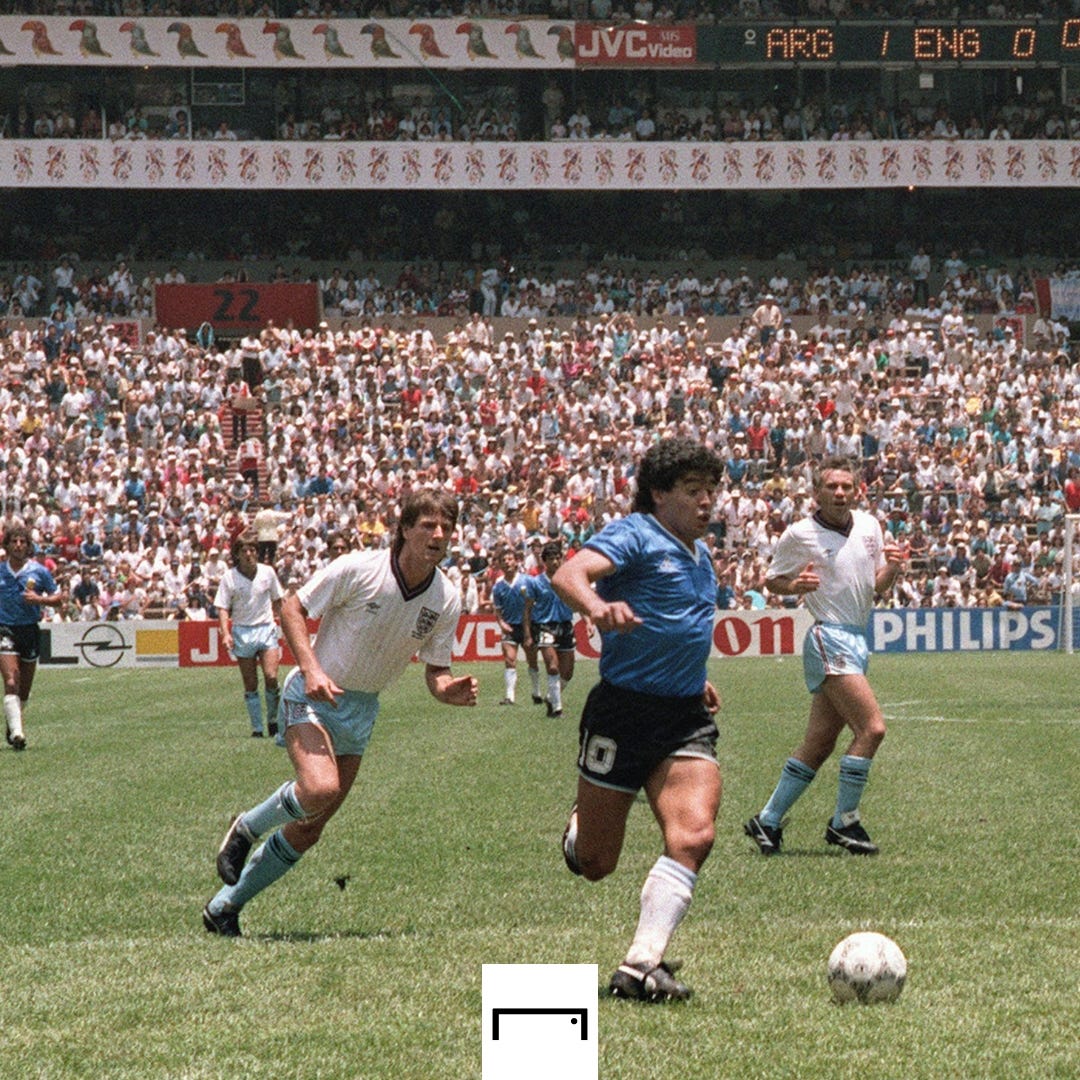 “It was typical of what he could do,” Shilton admitted. “But we weren’t in the right frame of mind after what happened. When you know someone’s cheating, in a big match like that, your stomach drops.

"So, we weren’t quite tuned in to our defending after that... But you can’t take anything away from him. Maradona did what he’s capable of doing.”

Barnes, meanwhile, maintains that Maradona's second goal was in no way influenced by his first.

"We were all international footballers, we'd all been playing professional football for a long time, so we'd seen many injustices in league games where goals shouldn't have been allowed for blatant offsides, fouls or whatever," the former Liverpool ace argued.

"So, for professional footballers to claim that they were stunned by the handball shocked me. To say that it had anything to do with the second goal is rubbish.

"I don't believe that it affected us in that way at all. Yes, there was a feeling of injustice. But it didn't affect the way we performed."

It certainly did not affect Barnes, whose introduction with 16 minutes to go changed the game.

The then-Watford ace teed up Lineker for one goal with a fantastic cross from the left flank and the pair would have conjured up an almost identical goal in the dying seconds had it not been for Julio Olarticoechea, who produced the most sensational clearance to seal victory for Argentina.

Naturally, that England had come so close to forcing a draw only added to their sense of frustration at full-time.

Manager Bobby Robson bemoaned the standard of officiating, while Terry Butcher, Gary Stevens and Kenny Sansom confronted Maradona when they were all summoned to submit urine samples in the doping room afterwards.

"He came in and he was the last person we wanted to see," Butcher told the Daily Record. "He didn't speak English and I didn't speak Spanish but when I asked him whether he had used the head or the hand, he pointed to his head.

"Maybe that was because it was a small room and he feared us because there were three Englishmen and we weren't very happy! He probably took the safe option but that irritated me even more.

"If he had come in and said, 'It was my hand and I apologise', then I would probably have only hit him four or five times rather than the 20 I felt like.

"But I would pay a few thousand pounds to be in that room after the match again... Let's just put it like that." 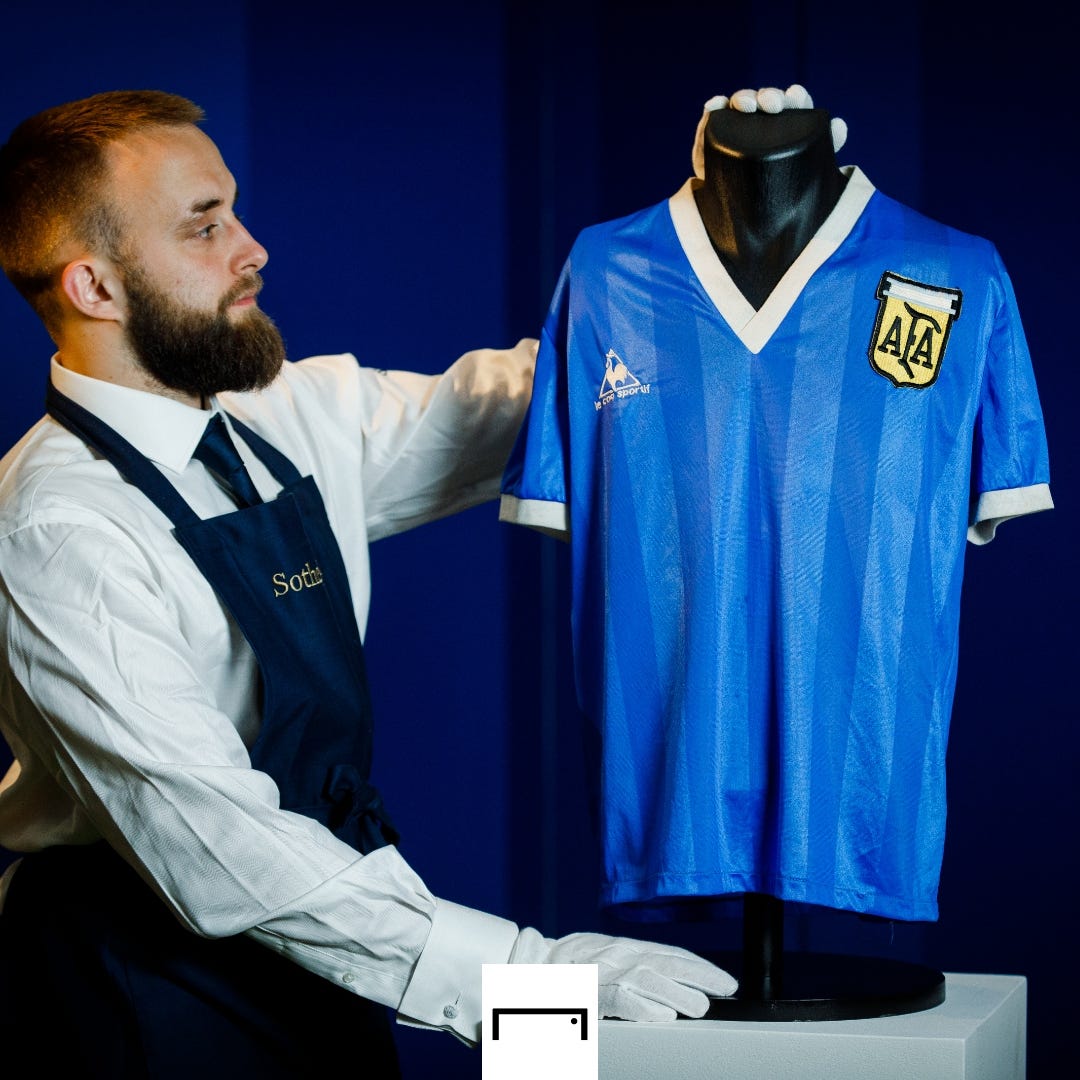 Barnes, though, holds no ill will towards Maradona.

"I don't blame Maradona," he insists. "I blame the referee and the officials for not seeing it. I don't have anything against Maradona.

"He was the best player in the world. And I was just watching everything he did. Of course, I was following the game and cheering us on.

"But I even watched him warm up. Watching the best player in the world – possibly the best ever – going through his repertoire was a thrill.

"And, you know, his second goal wasn't bad, was it? He ran half the length of the pitch! So, that was something to see.

"Also, it's not as if we've not seen other players handle the ball. We've all seen the likes of Michael Owen and Paul Scholes try to get goals that way.

"They just didn't get away with it because they weren't as clever as Maradona. And that quarter-final was all about Maradona."

For better or for worse, the match also propelled Maradona towards superstardom, casting him as the game's most compelling anti-hero.

Should the 'Hand of God' have been disallowed? Absolutely. But there is no denying the perfect poetry of the most divisive figure in football following up the most infamous goal in history with its most beautiful just four minutes later.

"I’ve never seen a better goal and it was my privilege to be on the pitch when it actually happened," said Hodge, who ended up in possession of Maradona's shirt, which sold for a record-breaking £7.1 million ($9m) at an auction earlier this month.

"You say to your kids and your grandkids, ‘See that fella there, I played against him twice and I tell you what… he was brilliant!’"

There is so much more to the Maradona story than what happened that day in Mexico City but that game perfectly encapsulated his character.

It will clearly never be forgotten either.

Even after his passing, the English tabloid press labelled him "a villain" and "a cheat", with the Daily Star even asking "Where was VAR when we needed it most?" while the rest of the football world was mourning the death of its god.

And that level of polarisation, that kind of insanity, can only be explained by two goals – not just one.