Benfica ace Darwin Nunez is one of the summer transfer window's hottest properties, likely to command a massive transfer fee that will take him to Anfield to join Liverpool's star-studded forward line.

And while his current employers are set to make a handsome profit from their ace, another European giant may well be wondering what might have been.

The 22-year-old smashed his way to 34 goals in all competitions for the Lisbon giants in 2021-22, including an incredible mark of 26 in 28 in the Primeira Liga and six in the Champions League, to outscore both his illustrious compatriots Luis Suarez and Edinson Cavani as his side fought through to the quarter-finals.

Suarez has in fact been a fan of his countryman for some time now, even going to Barcelona with a recommendation to sign Nunez shortly after his arrival in Europe which fell on deaf ears.

Of course, if another elite European side had listened to one of their stars, Nunez might not even be on the market right now.

"When [Nunez] was at Almeria, I told Barcelona about him," Suarez admitted to journalist Gerard Romero in 2021.

"They asked me and I said, 'Keep an eye on this one, he's got something interesting about him...' But they replied 'No, he's in Almeria, he's too young.'

Barca's loss was of course Benfica's gain, but Uruguay too are thrilled with their latest strike sensation, who is ideally poised to take over from the veteran duo.

For the last decade Suarez and Cavani have ruled the roost in the Uruguay attack, taking the nation to three consecutive World Cup knockout rounds as well as victory in the 2011 Copa America.

But the pair, who were born within three weeks of each other in the city of Salto, are nearing the end. Both men have turned 35 and their final swansong at international level at least will most likely be the World Cup in Qatar at the end of the year.

Fortunately for Uruguay, the future up front no longer looks bleak thanks to Nunez's emergence.

The youngster has established himself as a truly elite forward and, with two standard-setters ready to pass on the mantle, he seems to have all it takes to follow in their footsteps by becoming a global star.

The 21-year-old has plenty in common with the pair. Like Suarez and Cavani he is a small-town boy, growing up on the Brazilian border in the agricultural hub of Artigas.

The native of the impoverished riverside neighbourhood Barrio Pirata failed in his first trial with Penarol but later succeeded thanks to the efforts of former Uruguay star Jose Perdomo, who took the 15-year-old to Montevideo to join elder brother Junior in the club's youth academy.

“The adaptation process was hard, which almost always happens, more so for the kids who come from up north,” Under-15s coach Robert Lima recalled to Ovacion.

Indeed, Darwin almost returned to Artigas when Junior dropped out of Penarol due to family problems.

“My brother was training with the Penarol first team but he had to leave,” Nunez told Referi.

“I was also going to go back to Artigas but he said to me: 'Stay here, you have a future. I'm the one who's leaving.'"

Nunez decided to keep working at the Manya, and his persistence paid off when he made his first-team debut in November 2017, aged 18, coming off the bench for ex-Liverpool, Atletico and Argentina star Maxi Rodriguez.

The teenager helped Penarol to consecutive Uruguayan titles in 2017 and 2018, as well as victory in the 2019 Apertura before he left for Europe, signing for second-tier Spanish side Almeria for a fee worth €‎5.4m (£4.6m/$5.7m). 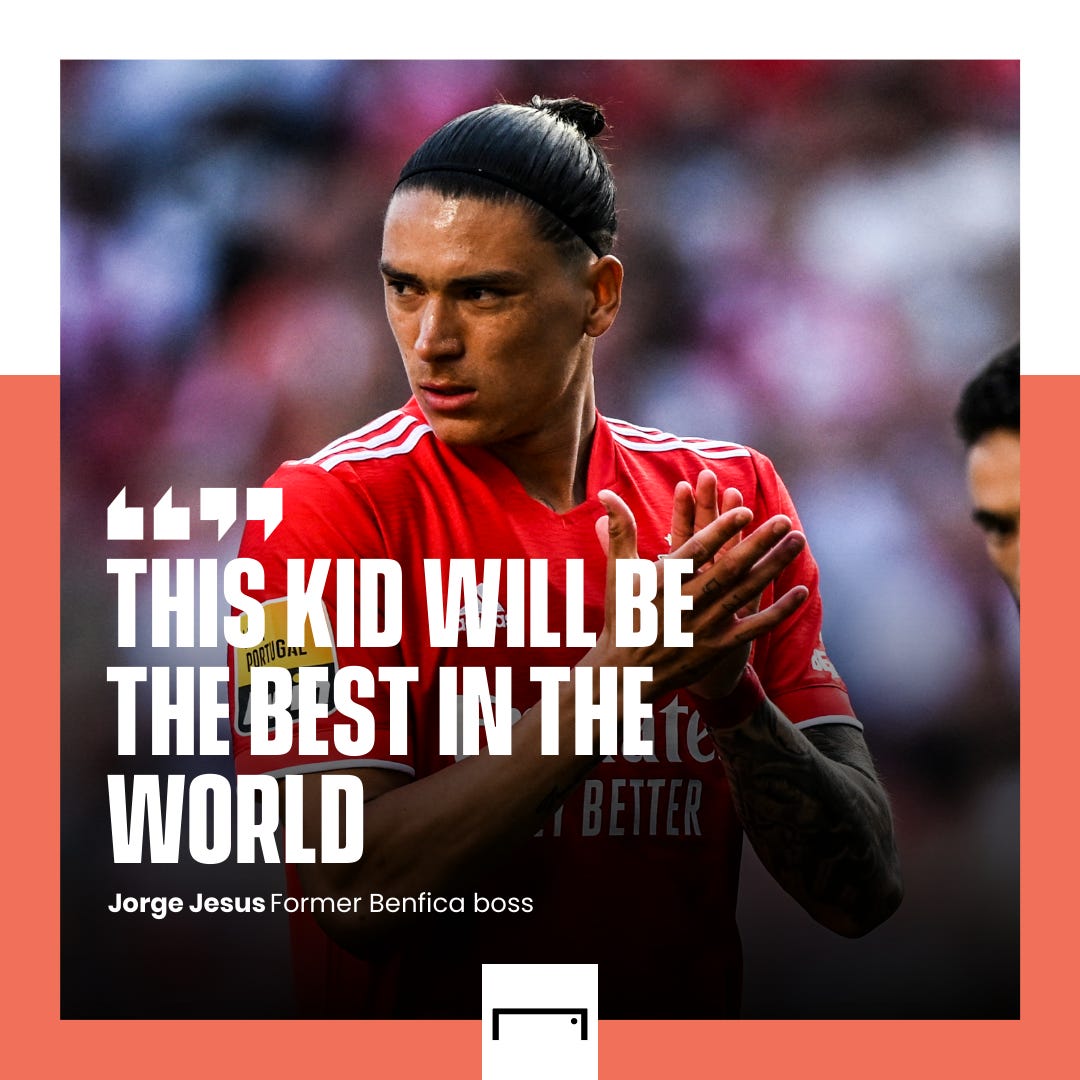 The youngster's first season in Spain proved a stunning success as he netted 16 goals in 32 Segunda Division games to finish fourth in the top scorer rankings, with Almeria narrowly missing out on promotion.

Just 12 months after arriving at the club, he was on the move again, becoming Benfica's most expensive signing in history as he moved to Lisbon in a €‎24.5m (£22m/$29m) deal in September.

Nunez took his time to settle under ex-Flamengo boss Jorge Jesus but eventually became a key part of the set-up, recording a respectable 14 goals in 44 games in his debut campaign before really hitting his stride this past season, which included two strikes past Liverpool in the Champions League to make a dazzling impression on the Merseysiders.

“There is a lot still to learn from me here at Benfica about the game, but he has all this ability for decision-making, execution, finishing and speed," Jesus said of his new charge shortly after signing in 2020.

“This kid will be the best in the world and, sadly for me, I will lose him soon.”

While he is still honing his trade, Nunez appears ready to take the next step and shine at Anfield, where he will have the further benefit of playing alongside and learning some of the finest forwards and players in the world.

Impressing next to such elite footballers will be no easy task, but the forward is used to that.

He managed to catch Uruguay's eye despite competition from the likes of Suarez and Cavani, so he won't be intimidated by having to battle it out with Mohamed Salah, Luis Diaz and the rest of Liverpool's star forwards for a starting spot.