In an exclusive interview with GOAL, the ex-Portugal international discusses his compatriot's incredible longevity and nearly joining Chelsea at 15

Adrien Silva would be forgiven for wanting to avoid talking about Leicester City's Europa Conference League semi-final with Roma.

After all, nothing really went right for him at the King Power Stadium, his £22 million ($27.5m) transfer from Sporting C.P. seemingly doomed from the start.

The deal was completed on August 31, 2017, but FIFA did not receive the requisite paperwork until 14 seconds after the close of the summer window.

FIFA rebuffed their attempts, though, and the Foxes reluctantly decided that taking the case to the Court of Arbitration for Sport would be futile, meaning the Portugal international was not cleared to make his debut until January 2, 2018.

By that stage, the manager who had signed Silva, Craig Shakespeare, had been sacked and replaced by Claude Puel.

The midfielder's Leicester career was effectively over before it had even begun.

"The new manager didn't like the player I was, and that's just a fact," Silva explains in an exclusive interview with GOAL. "When I did get a chance to play, I proved I could be a good option for the team, but the manager was the only person that didn't agree with that.

"But, sometimes, in football, the coach doesn't trust in you, or you have injuries – different kinds of problems can lead to these difficult moments.

"But when you have something like the registration delay, things that, as a player, you can't control, it's very frustrating because it can change everything."

Still, it says much about Silva's character, and indeed his sense of humour, that when he was finally registered, he deliberately chose the No.14 jersey as an ironic tribute to his deadline-day disappointment.

In that context, it is perhaps unsurprising, then, that Silva is actually more than happy to look back on his time at Leicester, and forward to Thursday's meeting with Roma.

"I would love to see Leicester win a first European trophy, and for so many reasons," he enthuses.

"First of all, because of some players that are still there that I'm still good friends with.

"Secondly, for the new owner of the team, Aiyawatt [Srivaddhanaprabha], because he's keeping his word and continuing the good work done by his father (Vichai).

"It's also great because the fans, and the people of Leicester, deserve success. When I played, I felt the fans were very supportive of me, especially the first game.

"When I was finally able to make my debut, my first minutes were really emotional. The reception from the fans was fantastic and I will never forget them for that."

The supporters' enthusiasm and eagerness to belatedly see Silva in a Leicester shirt was understandable, of course.

The latest in a long line of Sporting starlets, he had been identified as a prodigious talent at a very young age, not least by Jose Mourinho, who had tried to convince him to sign for Chelsea during his second stint at Stamford Bridge.

"When I was still playing with Sampdoria last December, we played Roma and I met Jose before the game," Silva reveals.

"We talked about that approach from Chelsea. I remember having a number of great conversations with Jose at the time and it was really nice to reminisce with him.

"In the end, though, I didn't make the move because I was too young. I was only 15 and I wanted to stay at Sporting, which is a great place to develop as a player."

His decision was eventually vindicated, with Silva ultimately going on to establish himself as a first-team regular at Sporting, which eventually led to him breaking into the Portugal squad.

Indeed, the reason why Leicester came calling in 2017 was because the year before he had become a European champion, and he had been integral to the Seleccao's success in France, too.

Silva did not see a minute of action during the group stage, as Portugal limped into the last 16 as one of the best third-placed finishers after three consecutive draws.

However, Fernando Santos, in a desperate bid to add some dynamism, creativity and control to his midfield, then started Silva in every game in the knockout stage.

So, was his introduction into the side the key moment in Portugal's shock Euro 2016 triumph?

"I don't know if we can say that," Silva says, laughing, "but I can say that I played my part.

"Everyone has his role, in their own particular way, and if everyone does their job well, the team can achieve its goal.

"Nobody expected us to win but we had this group mentality and this was the real strength of the group.

"To be honest, we never thought about winning the tournament during the group phase. Remember, Portugal had never won a major trophy before the Euros and there were so many great contenders that year: France, Italy, Spain and Germany.

"But our coach really encouraged this mentality that if we play as a team, it will be difficult to beat us. We just wanted to fight until the end and that's what we did.

"We took every game, step by step, and we didn't make many mistakes. And we achieved something special."

Cristiano Ronaldo, of course, had also been key, netting some crucial goals on their run to the final before then effectively becoming Santos' assistant coach in the 1-0 extra-time win over France in Paris.

Indeed, after being forced off early, Portugal's captain spent most of the game encouraging and instructing his team-mates from the technical area.

For Silva, Portugal's sense of unity was perfectly encapsulated by Ronaldo's unwillingness to dwell on his injury and instead focus on doing what he could to help his side.

"When you put your own emotions to one side, and you sacrifice yourself for the team, it's always better, and we all did that," he says.

"You can sometimes win games with individual skill from one player but to be a successful team, everybody has to play their part.

"And I'm not talking about 1 to 11 here. I'm talking about every player giving everything they have, even if they're only on the field for five minutes. 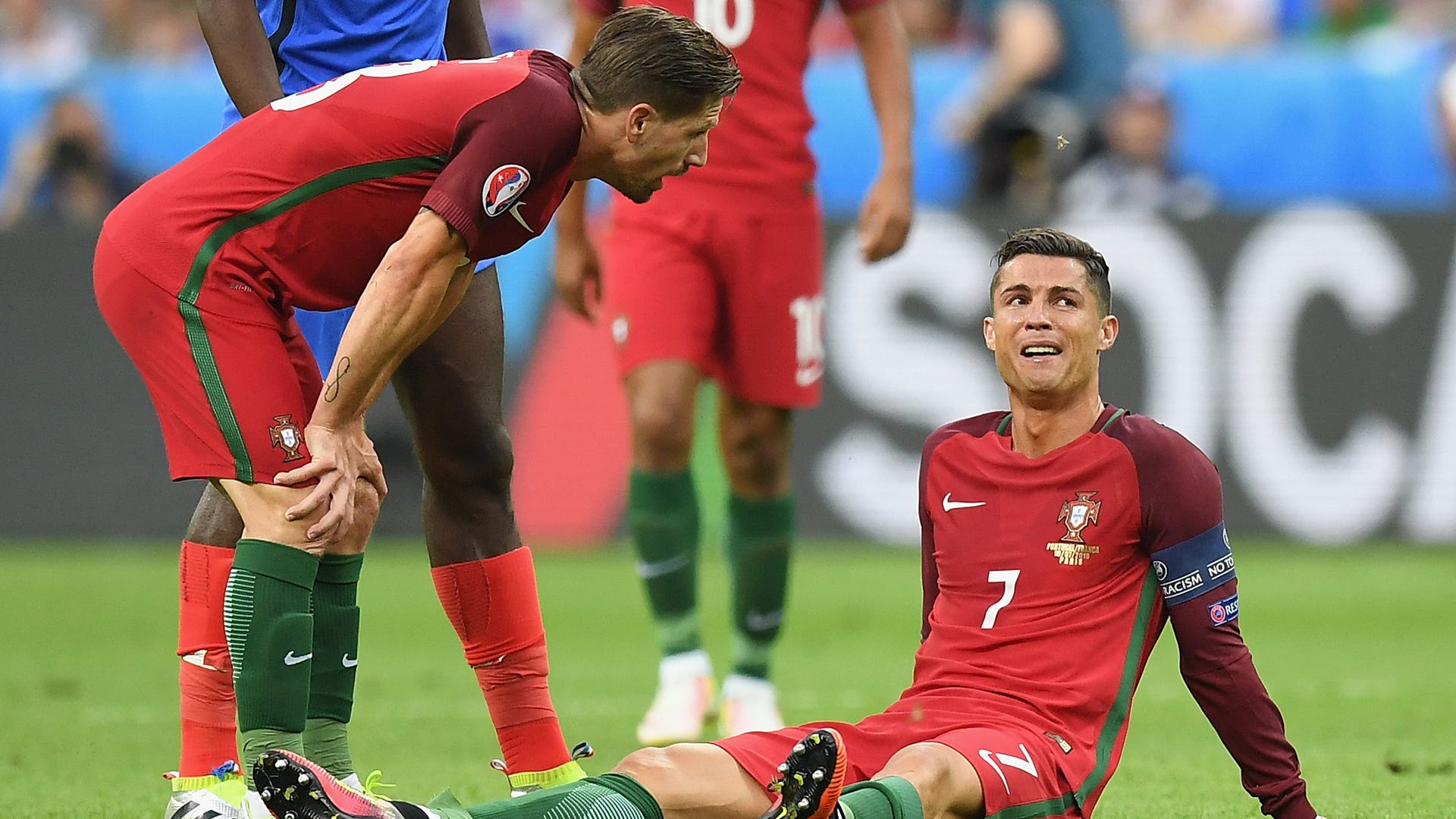 "This attitude makes the difference, and Ronaldo was always so influential in this regard.

"Apart from what he does on the pitch, which everybody already knows all about, the mentality and spirit he creates in the dressing room is very positive.

"He always gives a speech to lift the group and that was really important for us as a team at the Euros."

Ronaldo, of course, is still going strong at the age of 37, and now looking forward to another World Cup, in Qatar later this year.

"Of course, it's not surprising because it's Ronaldo, but you do start thinking, 'Until what age can he keep doing this?'" Silva exclaims.

"But his longevity is the most special thing about him. Of course, physically, with so many games, it can become more and more difficult. But he's still playing 60 or 70 games a year, and he's still in great shape.

"But even if he starts playing less games, he'll still be scoring. So, I think he could still end up playing for another four or five years at the top, which is crazy.

"Because even after lifting so many trophies, and achieving so many things, he's never satisfied. He's still looking for more and more titles.

"And that's something that you can't take away from him. I'm just so happy to see him still shining."

It is clear that Ronaldo is a source of inspiration for the 33-year-old Silva, but what are his plans?

He is currently plying his trade in Abu Dhabi with Al Whada, but how much longer does he hope to continue playing?

And when he does eventually retire, does he plan to go into coaching or walk away from the game completely?

"I think I will stay in football, but I don't know yet in which area, or at what level," he confesses.

"But, for now, I'm focused on playing. We are second in the league and still fighting for the title, and we have a cup final in 10 days, so I want to win more trophies.

"I also want to share my experience with younger players. I like doing that. I've one more year on my contract here, so next year we'll see what happens.

"And besides," he adds, smiling, "one thing I've learned from football is that you can't plan long term."

Silva has his time at Leicester to thank for teaching him that very valuable lesson...