After a sluggish beginning to the season, the 33-year-old has hit his top level over the course of the last couple of months

Cristiano Ronaldo has made his best start to a calendar year since arriving at Real Madrid by netting 12 times in the first two months of 2018.

The form and longevity of the Portugal star was called into question at the start of the season, which he started slowly. Hampered by suspension, it took the 33-year-old until a December 9 rout of Sevilla to get his third goal of the league campaign.

Since the winter break, the Ballon d’Or winner has set about making up for lost time, and has hit a particularly rich seam of form in recent weeks.

Ronaldo has scored double or better in four of his last six La Liga outings, including a hat-trick against Real Sociedad. Only Levante have managed to keep the attacker quiet during this period, in which he has scored 10 goals.

Additionally, the Portuguese attacker’s double against Paris Saint-Germain helped Madrid to a 3-1 first-leg lead over the Ligue 1 leaders in the Champions League last 16.

Even a forward as prolific as Ronaldo has rarely enjoyed such a prolific period, netting 1.33 goals-per-game on average since the beginning of January.

It is his hottest ever start to a year at the Bernabeu. Although he scored more goals in January and February in 2013, he also played four more fixtures and therefore only struck 1.23 goals-per-game.

Twelve months earlier, he matched the 12 goals he has struck this time around but had similarly played 13 times for Los Blancos in comparison to the nine outings he has had under Zinedine Zidane so far this year. 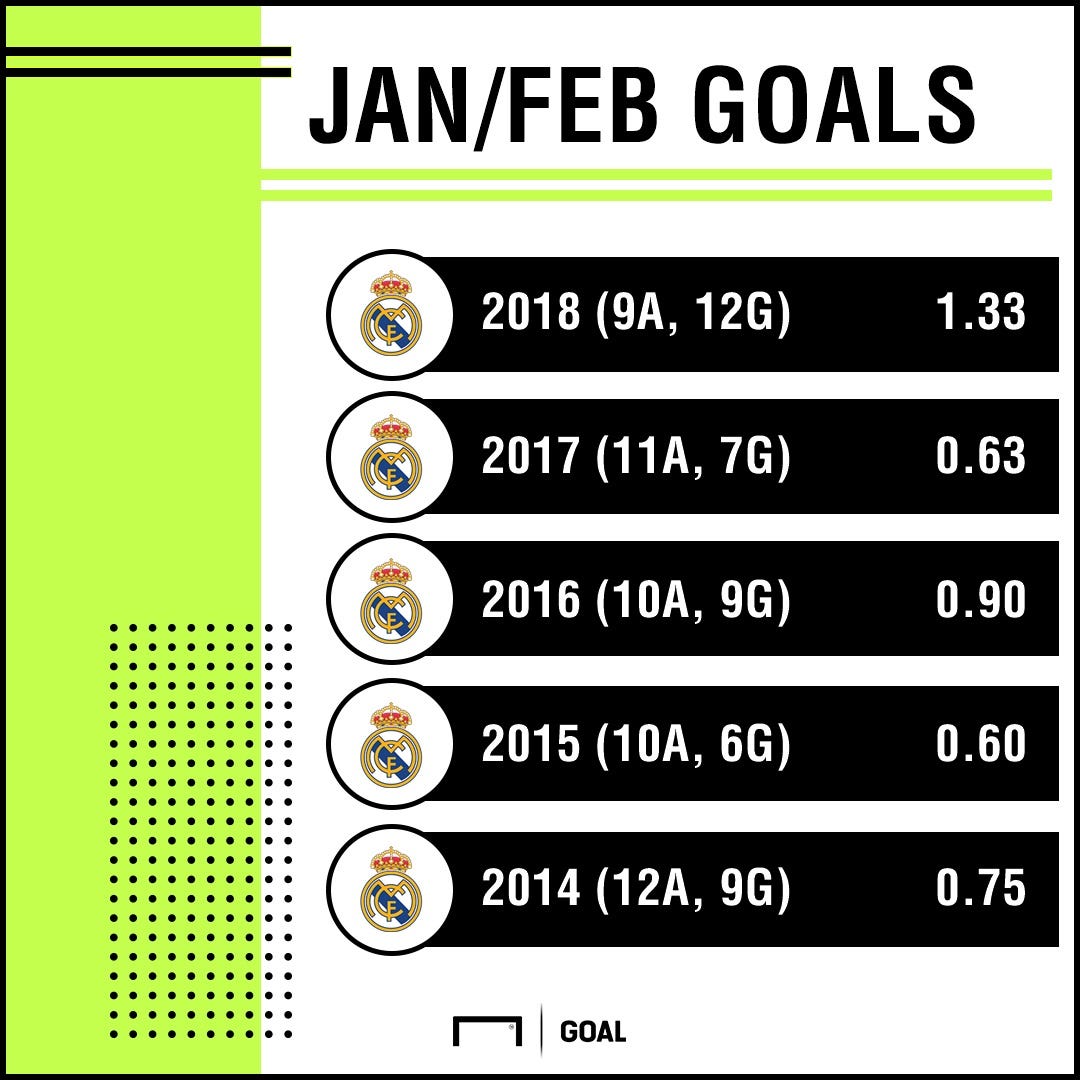 Ronaldo's turnaround in form, if continued, could propel him in back into Ballon d'Or contention towards the end of the year, despite Lionel Messi having been considered the favourite after an excellent La Liga season.

"I never dreamed of winning the Ballon d'Or five times," Ronaldo said this week . "If I had to finish my career now, I would be super happy... [but] if I won another Ballon d'Or, two or three more times I'd be delighted with life.

"Even if I don't win, I've already won five... but I still have the confidence and the strength to compete for the prize... it depends on the titles we win this year. Everything I dreamed of, I achieved."

The news also bodes well for Portugal as they seek to upset the odds and win World Cup 2018.

Ronaldo has consistently improved his output in World Cup years since moving to Spain, starting the year with just five goals in 2006 before netting six times and nine times in 2010 and 2014 respectively.