NxGn
Samuel Ahmadu
Correspondent
07:48 13/04/2020 Comments()
Getty Images
The teenage sensation is aiming to walk in the footsteps of her role model after being named in the inaugural women’s NxGn top 10

Having started on the same streets as Nigerian greats such as Mercy Akide-Udoh, Perpetual Nkwocha and Asisat Oshoala, there's no denying Gift Monday has plenty of role models to look up to.

Captaining Nigeria to African Games glory for the first time in 12 years and scoring the first goal of the tournament before her senior debut last September, Nigeria seemingly unearthed another hot prospect.

Monday enjoyed a fine spell at now-defunct COD United Ladies, scoring 18 goals during her two-season stint, including in the final to win the 2016 Lagos FA Women's Cup before joining FC Robo in 2017.

She is now the captain of FC Robo, which discovered Barcelona star Oshoala, and has netted 13 times for the Nigeria Women's Premier League (NWPL) side, as she aims to walk in the steps of Africa's biggest names in the game.

In addition, Monday was ranked seventh in Goal's inaugural top 10 best wonderkids in women's football and the only African on the list, which speaks volumes of her talent.

"I'm happy and grateful to God and Goal for such great recognition to be listed among the best young female footballers in the world," Monday told Goal.

"I'm really surprised and very delighted at the same time and being the only African player to make the list left me totally speechless.

"Being named in the top 10 really makes me feel I can do more better, with this prestigious nomination I now know that my best yet comes.

"I have to keep training harder, be more focused and dedicated to improving my game so as to reach my potentials and realize my goals."

She ranks #7 in our list of the top 10 best wonderkids in women's football 🙌 #NxGn pic.twitter.com/zIqAuwJCrv

Like most talented girls in Africa, the challenge of gaining support from their parents at a young age still abounds and Monday's case isn't different, when she started up on the streets of Ajegunle, in the heart of Lagos.

"At first, my parents weren't in support of me playing football as they wanted me to fully face my education, but later gave me all the support I needed after discovering that I'm in love with football," the 18-year-old continued.

"I started playing soccer on the street with the boys and it was the best for me then as you get to make all the decisions by yourself and display every skill you've got without having to care if you're going to make mistakes.

"It was only later, I realized it wasn't at all that matter, especially for anyone who wants to reach stardom because many good players get injuries that could jeopardize their future playing on the streets.

"There is no trained referee to officiate those games and no rules and regulations but this is different playing in an organized league and professional club, which has helped my game improve a lot." 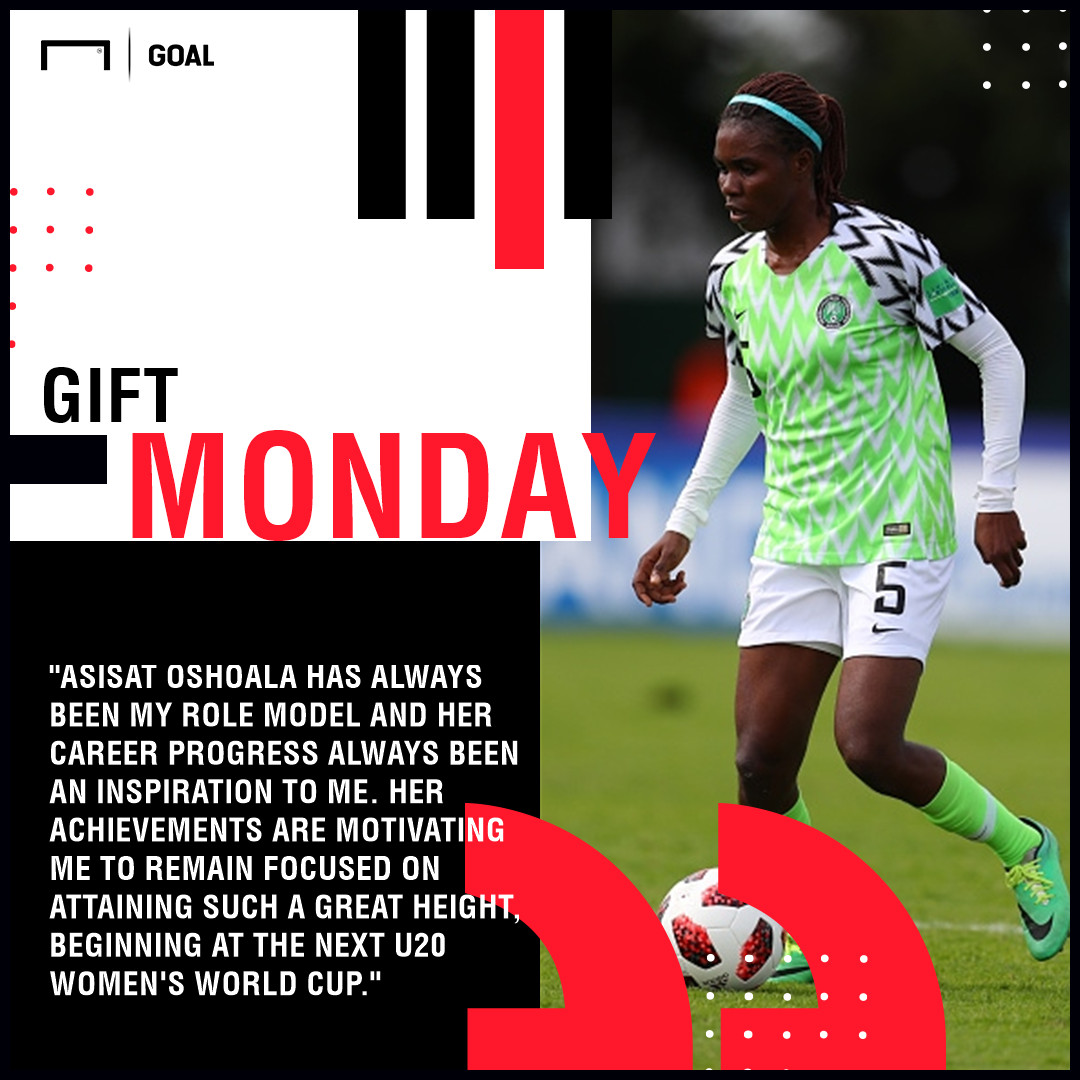 Monday starred for the Falconets at the 2018 Fifa U-20 World Cup as her fine dribbling abilities and power on the ball helped Christopher Danjuma's team reach the quarter-finals in France.

Despite already earning a look-in at senior level, the teenage forward will be looking to play a crucial role for Nigeria as they aim to qualify and impress at the next age-group World Cup.

Monday is enjoying her incredible rise at FC Robo, where Chidinma Okeke, Rasheedat Ajibade and four-time African Women's Footballer of the Year Oshoala were produced, and is drawing inspiration from the Barcelona star.

"Asisat Oshoala has always been my role model and her career progress always been an inspiration to me," she said.

"Her achievements are motivating me to remain focused on attaining such a great height, beginning at the next U-20 Women's World Cup.

"I am happy for the opportunities I've had so far, especially with the African Games. It is my dream to help the country with many successes.

"I will keep fighting to reach stardom. I am eager and hopeful to get a chance to play in Europe along with the best players in the world."

Monday has shown promise of what could be an excellent career at the top level, and after being named among Goal's best young female footballers in the world, Nigeria might have already found their next superstar.