Attacking midfielder Nooa Laine is expected to make his Finnish top-tier debut this year, and he still remembers his last visit to Malaysia fondly.

The Veikkausliiga, the Finnish top tier, is perhaps not as well-known to Malaysian fans as its glitzier counterparts in the European continent.

Yet it was no mean feat for Finnish-Malaysian attacking midfielder Nooa Laine to secure a move to top-flight side Seinäjoen Jalkapallokerho (SJK) just months after turning 18, having cut his teeth playing in the lower tiers in the past three seasons.

Laine will train with the SJK first team as he works his way up the ladder, with the one-time Veikkausliiga champions regarded as the club with arguably the best facilities in Finland.

It was a journey that began when he was merely a boy and is getting the youngster ever closer to fulfilling his dream.

"I started [training] when I was six, with a summer team in the municipality of Jyväskylä where I was born," Laine told Goal.

"Little children in Finland start training at sports or football clubs around this age, and I was no different. Around that age I also played with a couple of teams in the summer.

"I switched to another team when I turned 12, still in Jyväskylä. It was around that time that I started wanting to do it more seriously.

"At 16 I signed with HJK (Helsingin Jalkapalloklubi), and now I'm at SJK."

Laine's first ever senior-level goal, scored for Jyväskylän Jalkapalloklubi in 2018

The second child among five siblings spoke briefly about the role his Malaysian father played in shaping his budding career.

"My dad's the one who has always been pushing me to play football, instead of ice hockey, floorball and bandy which are also popular here," the youngster explained.

"He's passionate about football and has passed down this love to me. And these father-son things tend to stick with you when they begin early in life.

"He's from a little village called Batu Laut (in Selangor). I've visited there three times actually, the first two times when I was too little to remember, but I remember our last visit vividly, because it was around the time of the 2010 World Cup! It was really nice and I had a great time."

His Malaysian connection is something he is definitely aware of, and it's a topic that he has admittedly discussed with his father.

"My father has shown me things on the biggest Malaysian club, JDT (Johor Darul Ta'zim) and the two of us have talked a little bit about the possibility of representing Malaysia, but it's nothing concrete," the attacking midfielder continued.

"In football, in life, you never know what's going to happen, you know..."

But talks of representing of Malaysia is perhaps premature, when Laine has featured regularly for the Finland Under-16 and U-17 teams.

And it's perhaps worth mentioning that the Finland national team has qualified for their first ever European Championship, a feat that has seen them shot up to 54th place in the FIFA rankings.

"I've played in around 10 games with them, in non-competitive tournaments. I also attended two training camps with the U-18 team last year, but no games were played because of Covid-19," he stated. 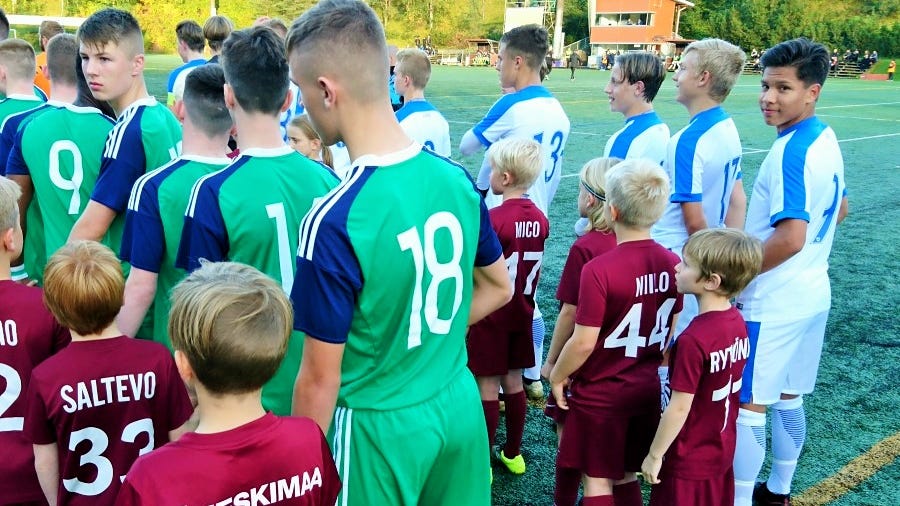 However, the immediate focus of the teenager - who has made a total of 15 full-team league appearances and scored five goals - is his responsibility towards the club he just signed with earlier this month.

"I want to use my strengths to go far at the club," said Laine.

"I like to have the ball, I think I'm quite good at decision-making, dribbling and passing, and I am able to shoot well with both feet. For now I want to be in the starting eleven regularly for SJK.

"And then of course when that happens, I have to start thinking about playing abroad. But it has to begin with me working hard to become a regular starter here."