Mbappe, Barcelona & Kane: The winners and losers of the summer transfer window 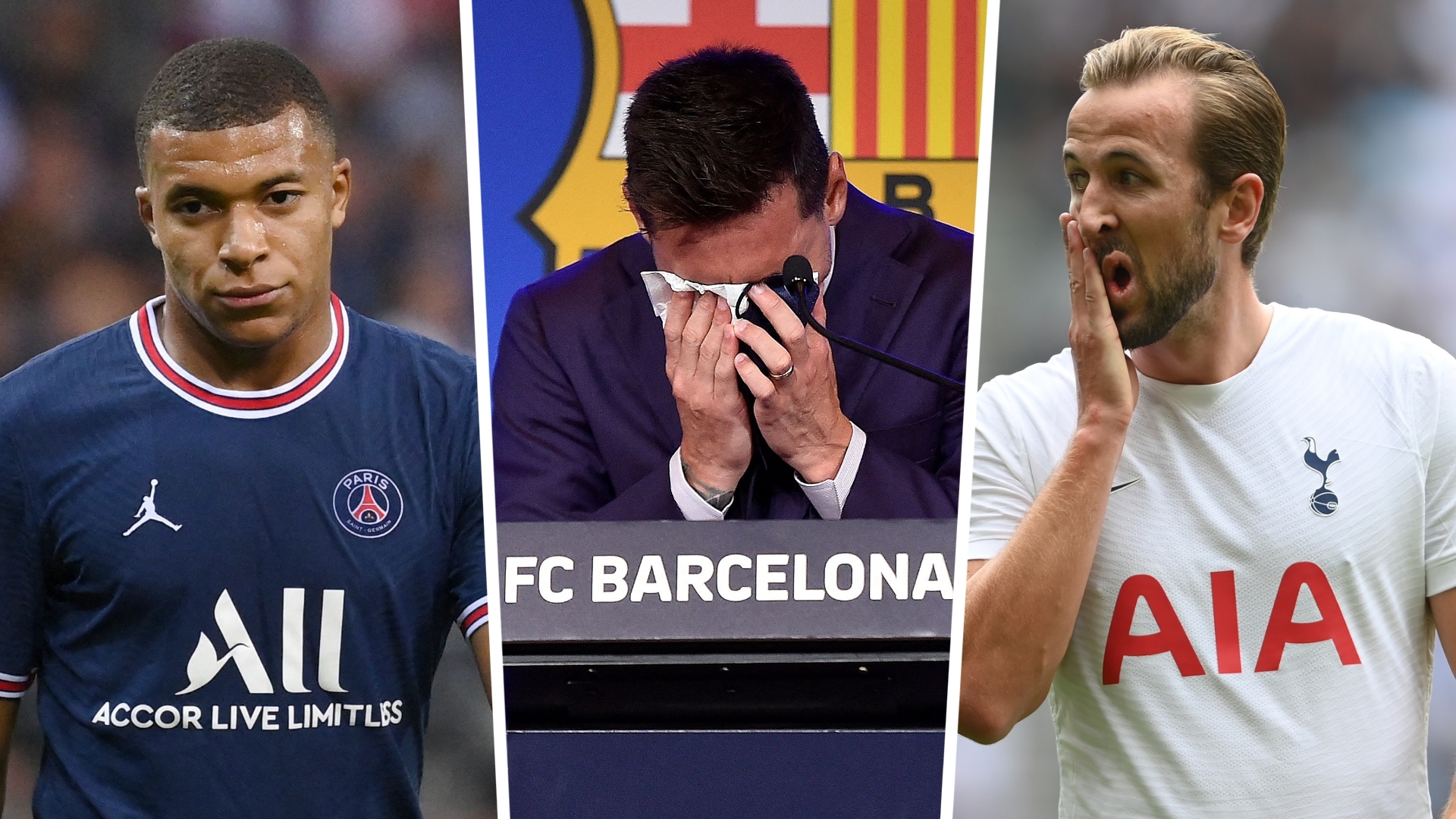 An insane summer of signings and sales drew to a close on Tuesday night, so which players and clubs will be happiest with how things panned out?

This was meant to be a summer of prudence, a time for football to take stock and have a long, hard look at its fragile financial framework.

Instead, the top end of the game spiralled out of all control. The fact that Lionel Messi and Cristiano Ronaldo changed clubs during the same transfer window says it all.

At a time when most clubs were still coming to terms with the financial crisis caused by Covid-19, pandemic-proof, the likes of Chelsea, Manchester City and, most notably of all, Paris Saint-Germain took advantage of what was a buyers' market.

The knock-on effect was as dramatic as it was significant.

But who were the winners and losers of the 2021 summer transfer window?

Goal makes its picks below....

Nobody could have predicted the devastating effects of the pandemic but it was only ever going to be a matter of time before the worst-run club in the world were punished for their fecklessness.

"The LFP and UEFA make recommendations but nobody sets a salary cap," he argued. "We are above what is recommended but the important thing is to be sustainable." But Barca's financial model wasn't in the least bit sustainable.

The club has now been decimated by the pandemic, losing Lionel Messi, the greatest player in the Blaugrana's history, for nothing, after being unable to afford his wages, in spite of the fact that he had agreed to a 50 per cent wage cut.

And then, even after seeing a distraught Messi leave for bitter rivals PSG on a free transfer, Barca still found themselves so stuck for money that they had to ask senior players to take further wage cuts just so they could register summer signings Memphis Depay, Sergio Aguero and Eric Garcia.

Then, on deadline day, they allowed Antoine Griezmann to return to Atletico Madrid, bringing an end to one of the most senseless and costly transfers in football history. The Frenchman has been replaced by Luuk de Jong, who has scored 10 goals in 69 Liga appearances.

If it weren't so sad, it would be laughable. Because Barcelona used to stand for something. They used to be more than a club. Now, Camp Nou is little more than a crumbling monument to financial recklessness.

And perhaps the most notable thing about the capital club's summer signings is that only Mendes (€7m loan fee) and Hakimi – whose €60m (£52m/$71m) acquisition from cash-strapped Inter is likely to prove a bargain anyway – commanded transfer fees.

The net result is a team overflowing with world-class talent in almost every area of the pitch. As Jose Mourinho said when asked if he was happy with Roma's summer dealings, “Do you know of any coach that is completely satisfied with his squad? Maybe (Mauricio) Pochettino, but nobody else!”

Of course, the Argentine coach is now under immense pressure to deliver the Champions League trophy his Qatari employers have craved for so long but let's face it: the transfer window couldn't have gone any better for Pochettino and PSG, who have managed to strengthen their own side and weaken some of their biggest rivals in the process.

It's clear that Harry Kane wanted to leave Tottenham to win trophies. And he understandably felt he would have an excellent chance of picking up silverware at the Etihad Stadium, home of the reigning Premier League champions Manchester City.

Daniel Levy refused to let Kane leave though, meaning the 28-year-old must spend another season in north London. The striker has, unsurprisingly, been welcomed back into the fold by both manager Nuno Espirito Santo and the club's fans, and it would not be a surprise to see Kane have another productive campaign.

Tottenham also presently top the table but even qualifying for the Champions League will be a tough task for a squad that lacks the depth of top-four rivals City, United, Chelsea and Liverpool.

Indeed, the obvious conclusion is that Kane has missed his chance to play for a title-challenging team worthy of his immense talent, as it remains to be seen if City will test Levy's resolve with another massive bid next summer.

The Abu-Dhabi-backed side may instead go all-out to sign Borussia Dortmund's striking sensation Erling Haaland, who is seven years Kane's junior. By that stage, though, both Kane and City could be counting the cost of failing to make the deal happen this summer.

City boast a plethora of attacking options but they have just one centre-forward on their books, Gabriel Jesus, and even he is more effective as a winger these days, while Kane is stuck at a club playing Europa Conference League football that would rightly consider a top-four finish in the Premier League an excellent achievement.

Of all of the protagonists in one of the biggest transfer sagas of the summer, the only one smiling right now is Levy.

Bayern Munich have long been accused of killing any semblance of competition in the Bundesliga by pilfering players from their biggest traditional rivals, most notably in recent seasons Borussia Dortmund.

Now, though, their attention has turned to RB Leipzig, who have emerged as a major force in German football over the past five years.

After finishing as runners-up last season, the Red Bull-funded squad have lost not only their coach, Julian Nagelsmann, to Bayern, but also two of their best players in Dayot Upamecano and Marcel Sabitzer.

Obviously, David Alaba's departure to Real Madrid on a free transfer was a blow for the Bavarians but they refused to be held to ransom over the Austrian's new contract and their wage bill looks a lot healthier now, given Jerome Boateng and Javi Martinez have also left.

Perhaps the biggest boost of all, though, was managing to hold on to Robert Lewandowski.

The Pole was understood to be open to a new experience in a different league and, as Goal reported, Chelsea considered making a move for the striker before eventually managing to bring Romelu Lukaku back to Stamford Bridge.

Lewandowski, though, is still at the Allianz Arena and, with Upamecano and Sabitzer now on board, Bayern look well placed to not only retain their Bundesliga crown but also mount a serious Champions League challenge under their exciting young coach.

Obviously, nobody will be more disappointed by the fact that Kylian Mbappe didn't move to Real Madrid than the makers of the farcical Spanish football show El Chiringuito. However, the man himself is likely to be pretty disappointed right now.

As PSG sporting director Leonardo admitted last week, Mbappe wanted to leave the Parc des Princes. And his heart has long been set on a transfer to Real Madrid, whom he idolised as a child.

Los Blancos did what they could to make the deal happen, offering a whopping €220m (£189m/$260m) for a player with just a year remaining on his contract.

However, PSG didn't even respond to Madrid's offer, leaving the Spanish giants seething. One can only imagine how Mbappe feels, then.

PSG may have had an incredible transfer window and money is largely an irrelevance to their Qatari owners, but it is now highly likely that next summer they will lose one of the most valuable players in the world for absolutely nothing.

The bitter fan backlash that saw Manchester United's Premier League clash with Liverpool postponed feels like an eternity ago.

There certainly wasn't any noticeable rancour at Old Trafford on the opening day of the season when World Cup winner Raphael Varane was presented to the crowd before Jadon Sancho made his eagerly awaited debut for the Red Devils in a rousing 5-1 rout of Leeds.

And now the supporters are even happier, having been sent into ecstasy by the news that the legendary Cristiano Ronaldo has re-joined the club. Ole Gunnar Solskjaer's side would have been better served signing a central defensive midfielder but you just can't put a price on that kind of PR.

The Glazers are still taking a huge amount of money out of United on an annual basis but after such a spectacular transfer window, it seems all has been temporarily forgotten and forgiven, as far as the vast majority of fans are concerned.