According to the forward, he is satisfied with his role in Ole Gunnar Solskjaer’s squad rather than take up the country’s mantle of leadership

Odion Ighalo has ruled out becoming the President of Nigeria in the wake of his blistering form for Manchester United.

The ex-Watford and Granada man announced his retirement from international football after winning the 2019 Africa Cup of Nations Golden Boot.

Ighalo, who boasts of 16 goals from 35 Super Eagles’ outings and is Nigeria's seventh-highest scorer, claimed his exit would help younger players "learn and grow".

In the wake of his blistering form for his English outfit, there have been calls for the 30-year-old to consider his international U-turn.

In one of Ighalo’s recent posts that showed his charity work, a fan tipped the ex-Nigeria U20 skipper to become the country’s no. 1 citizen - an idea the striker laughed off, claiming he is satisfied with his role at Old Trafford.

“Abeg o leave me to manage my position as Manchester United striker. I no fit Naija wahala or politics,” he replied in a tweet in pidgin English.

The interpretation means ‘‘Please leave me to manage my position as Manchester United striker. I’m not ready for Nigeria’s problems or politics.’’ 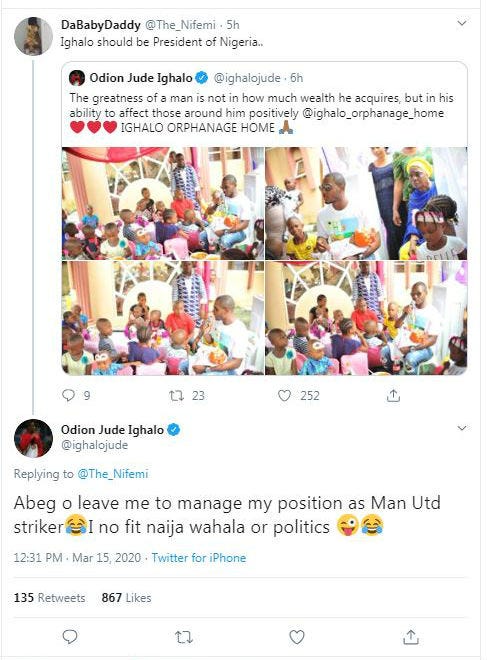 Well, should Ighalo finally accept that bid, he could become the second African footballer to become his country’s leader after Liberia’s George Weah.

The Nigerian has fast become a fan favourite at Old Trafford, netting four goals in three starts since joining on loan from Shanghai Shenhua in January, the latest being a goal and an assist in the 5-0 Europa League win at LASK.