Amid links with a move for Chelsea's Eden Hazard, are the Premier League leaders finally willing to stump up the new going rate for the best players?

"Even City," Pep Guardiola insisted on Friday when pushed on transfer spending. "There are salaries we cannot pay, and there are transfer [fees] we cannot pay.

"We cannot pay that right now. They [the board] told me."

Those comments have raised eyebrows but presumably the Manchester City coach was explaining that his club have not paid big fees for individual players because they have needed to spread their money around to strengthen several areas of the squad.

Technically, it is a case of "will not" rather than "cannot". City, of course, have as big a budget as any. If they had wanted to, they could have triggered Neymar's Barcelona buy-out clause in the summer and paid him the wages he is now earning in Paris. They didn't, of course, because while they would have had one of the world's best forwards, they wouldn't have had any full-backs.

Now, though,  Goal understands that City are interested in Eden Hazard. It is not yet known how confident the club are of persuading Chelsea to let their star man move to a direct rival, or if the Belgian himself will spurn Real Madrid's advances. There is plenty of time for that to sort itself out, and the main concern for now will be how City expect to sign such an expensive player given what Guardiola said just three days ago.

Luckily, he has already explained it.

“It’s true when the people of Abu Dhabi took over the team, in that period they spent a lot," he said ahead of the game with Newcastle on Janury 20. "But our most expensive player is Kevin De Bruyne (around £55m) and when you see now the reality, a lot of clubs spend much more for one or two players.

“We [spent] the same amount for four, five or six players. In the end what we spent in the summer is quite similar to United, but they bought two or three players and we bought six or seven."

Guardiola rules out buying a No.9 and clearly doesn't want to get into more summer transfer sagas (so could sign players in January). Also explains why players had no instructions at all v Watford, plus Liverpool reaction & players being 100% committed to transfers. pic.twitter.com/3ke4MZyVei

Guardiola said he does not judge United for how they have spent their money, but it does illustrate the point. City have not been in a position to pay upwards of £80m on one player because they have had more pressing needs.

That could soon change.

In that same pre-Newcastle press conference, Guardiola spoke openly about the market and City's plans for it.  Three days later the Blues' latest transfer strategy was revealed by Goal , and it turned out the Catalan was in fact giving chapter and verse about how the club are now conducting their business.

He spoke of "anticipating" the market; as well as pointing out that players will cost even more in the summer than they will in January, he hinted City would simply try to get their top targets in this month rather than waiting. He even went as far as saying the club would be "unlucky" if they had to do business during the summer. 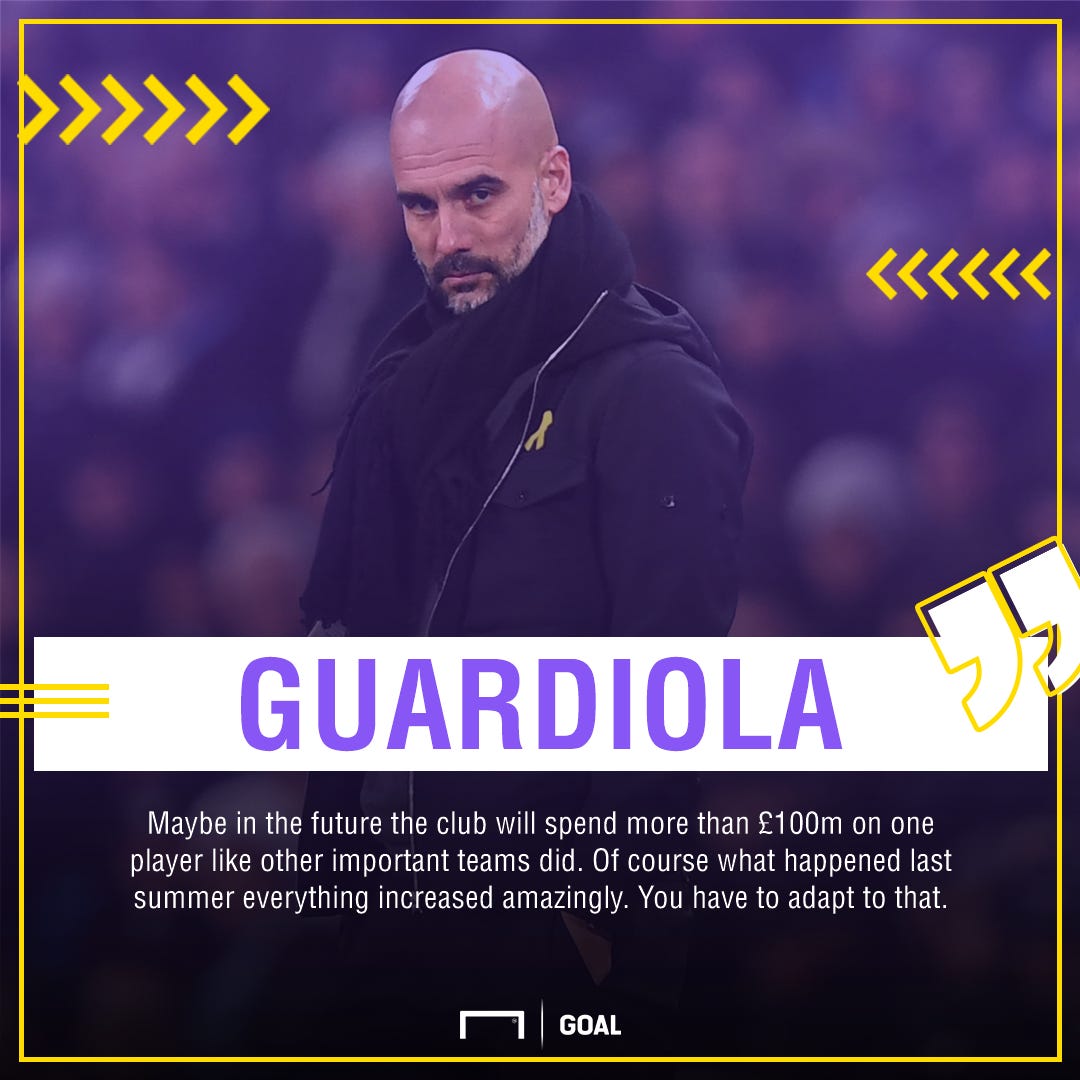 It turns out everything he said reflected City's newest plans, plans which were only finalised the day of the Newcastle game. The main message is this: they really do not want to spend a World Cup summer pursuing three or four top players, especially with the window closing before the season starts on August 11.

In the last week the Blues have been trying to do the bulk of their "summer" business in January. A move for Aymeric Laporte should be completed before Wednesday's deadline , while they have been trying to persuade Shakhtar Donetsk to sell midfielder Fred this month . There is also a third name on the agenda, though senior officials are keeping his name close to their chests and even in the middle of last week it was believed there would not be enough time to sign him.

So everything Guardiola said in public turned out to reflect exactly what is happening behind the scenes.

He said something else, too.

Guardiola on money/transfer spending. Speculates City could one day spend more than £100m on a player. Explains big outlay last summer, expects prices to go up and up. Comment but no judgement on United, other clubs. pic.twitter.com/17Gp7SLbrT

"Maybe in the future the club will spend more than £100m on one player like other important teams did. We need to change the squad and of course what happened last summer (Neymar), everything increased amazingly. You have to adapt to that."

If City do not manage to get Fred in this month they will hope to tie up an agreement to get him in the summer. They would then be in a different position to the last two years; they would not need five or six key players, they would only need one. A forward.

There will be other business - a lower-profile centre-back and replacements for anybody who wants to leave - but this could be where City decide they  will  pay the going rate, that they will "adapt", as Guardiola put it, to the new reality.

Hazard is one of at least three forwards that particularly appeal to Guardiola, and the club are looking into the possibility of signing him, but there are many obstacles to overcome before that can even be considered a genuine possibility.

Quite apart from Chelsea's reluctance to sell and Madrid's rival interest, the wages would have to be right; City do not want to go much above what De Bruyne earns (around £280,000-a-week plus bonuses).

But perhaps that £100m-plus signing could come to pass this summer, just as the rest of Guardiola's statements already have.

Whether it's Hazard or not, it looks like City can and will join the party.