Juventus have completed the signing of Paul Pogba on a free transfer after the midfielder's release by Manchester United. Pogba returns to Juve after six years at Old Trafford, and will be looking to regain the form that made him the world's most expensive footballer when United paid £89 million ($106m) to sign him in the summer of 2016.

He scored 34 goals and provided 40 assists in 178 appearances for the Bianconeri in his first spell with the club, but after an up-and-down time in the Premier League, it remains to be seen whether the 29-year-old is still capable of elite-level performances on a consistent basis as he returns to Serie A.

What is Pogba's contract length and salary at Juventus?

Having undergone a medical on Saturday, Pogba has signed a four-year deal at the Allianz Stadium, which is set to be worth around £8 million-a-year in terms of salary, plus bonuses.

The France international will also earn a hefty signing-on fee from the Bianconeri, who are hopeful that he will become the centrepiece of Massimiliano Allegri's side in their bid to regain the Scudetto after two disappointing campaigns.

Juve have expressed their delight over Pogba's return in an official statement on their website, which reads: "Paul is back in Turin. He left as a boy and returns as a man and a champion, but there is one thing that has not changed - the desire to write unforgettable pages of club history together once more. Pogba is back and we couldn’t be happier."

What number will Pogba wear for Juventus?

Pogba has been handed the No.10 jersey upon his return to Turin, reprising the jersey he wore during the most successful spell of his career thus far at Juve.

He takes over the shirt from Paulo Dybala, who has left the club this summer and has been linked with a move to Manchester United, as well as Juve's domestic rivals Inter and AC Milan.

Why '#PogBack' is fantastic news for Juventus

Pogba's return to Juventus is fantastic news for everyone connected with the club.

While it is true that Pogba struggled during his second spell at Manchester United, that has to be put in the context of the mismanagement that has plagued the Red Devils for the past decade, and so it would be harsh to blame him for the club's poor results.

Pogba is still a great midfielder, one of the best in the world, but needs to regain some self-confidence, and he couldn't have picked a better place than to do so.

Everyone at Juventus loves Pogba: the club, his former team-mates and the fans, and he is also a player they definitely need, with the Bianconeri having lacked a midfielder with Pogba's ability and attributes ever since he left the club in 2016.

In all likelihood, Pogba is not going to be the player who shone so brightly for Juve during his initial four years at the club, but for the current level of Massimiliano Allegri's midfield, he is undoubtedly an excellent upgrade.

Six years of failure - time for United & Pogba to move on

The time feels right for Paul Pogba to move on.

In a crucial summer for Erik ten Hag at Manchester United, he cannot afford to take a risk on a player who simply hasn’t lived up to expectations at Old Trafford.

Pogba could well claim United have let him down after careering from one crisis to another – but he was supposed to be a player to build the club around. Instead, he has been infuriatingly inconsistent, distracting and destabilising.

That is not the sort of influence Ten Hag wants in a dressing room that he needs to get onside immediately. This is United’s latest reboot – and at such a delicate stage in their history, their new manager can hardly afford to put a foot wrong.

In an ideal world, Pogba would have been at the heart of this new era. But after six years of failure, United need to move on.

So does he – and no one would be surprised to see him return to his best back at Juventus. If he does, that will only add to the sense of regret about what might have been.

Where will Pogba play for Juventus?

Pogba had an excellent relationship with Allegri during his first spell with Juventus, and it is likely he will take up the same role in the Italian's line up upon his return.

Deployed in the 'mezzala' role on the left-hand side of a midfield three, Pogba will be given licence to show off his creativity and imagination in the final third, in the hope he will provide goals and assists to supplement the team's forward players. 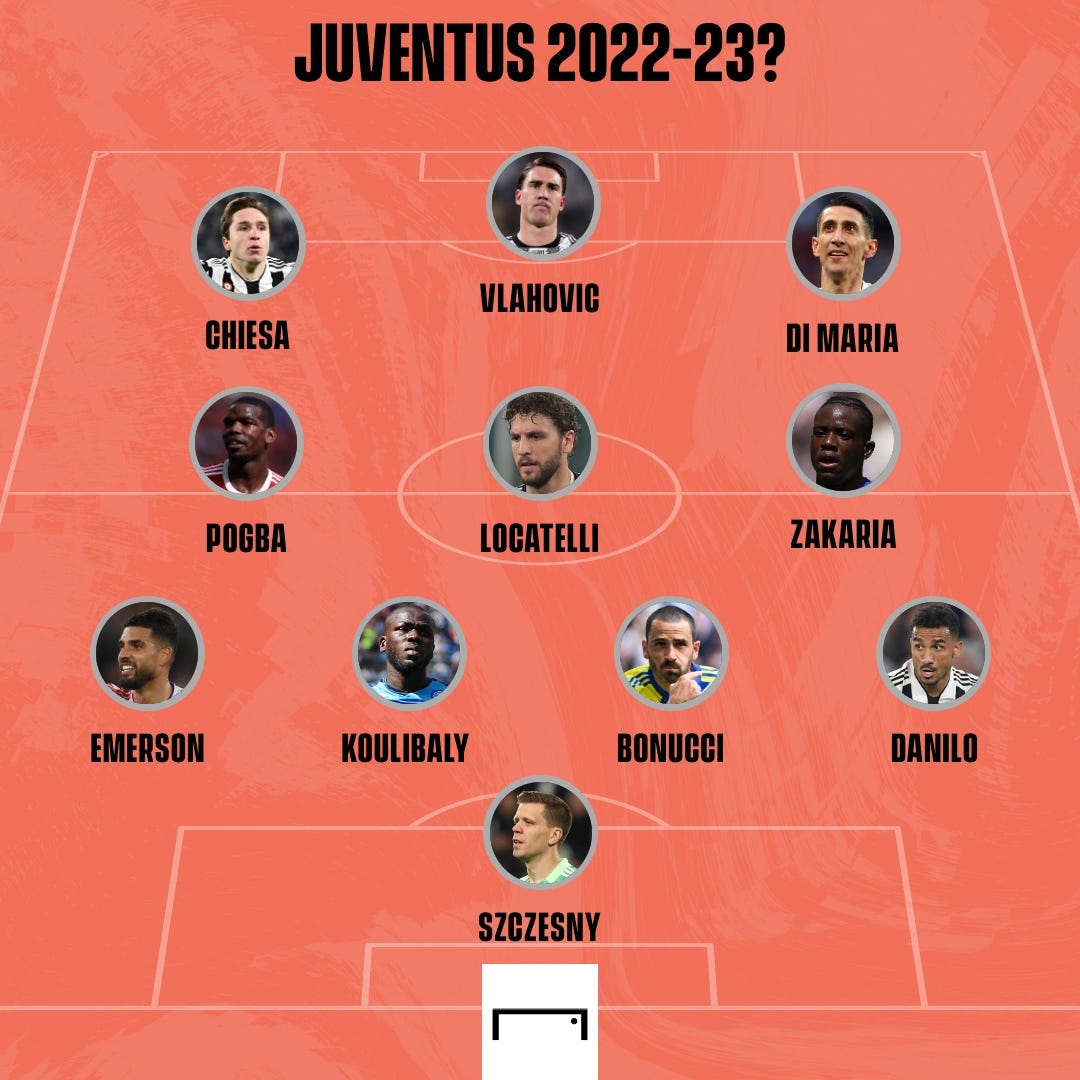 He is expected to be one of a number of new faces at Juve this summer, too, with Angel Di Maria having already joined after leaving Paris Saint-Germain, while Napoli centre-back Kalidou Koulibaly, Roma forward Nicolo Zaniolo and Chelsea's Emerson Palmieri are all known targets.

Who do Man Utd want to replace Pogba?

United's summer rebuild is set to cover all areas of the squad, but Ten Hag will need to pay special attention to midfield given the departures in that area of the field.

As well as Pogba, midfield trio Nemanja Matic, Jesse Lingard and Juan Mata have also been released, and given it was one of United's weaker areas beforehand, major surgery is likely to be required to get it up to the standard needed.

Frenkie de Jong is the club's top target in that area, with the Barcelona midfielder having worked under Ten Hag at Ajax and potentially available for transfer, while West Ham star Declan Rice is also admired at Old Trafford, though his £150m ($188m) price tag would be prohibitive to United signing him this summer.

An agreement has been reached, however, to sign Christian Eriksen after his successful return to action at Brentford following his collapse on the pitch while playing for Denmark at Euro 2020.

Will Pogba be a success at Juventus? Tell us in the comments 👇