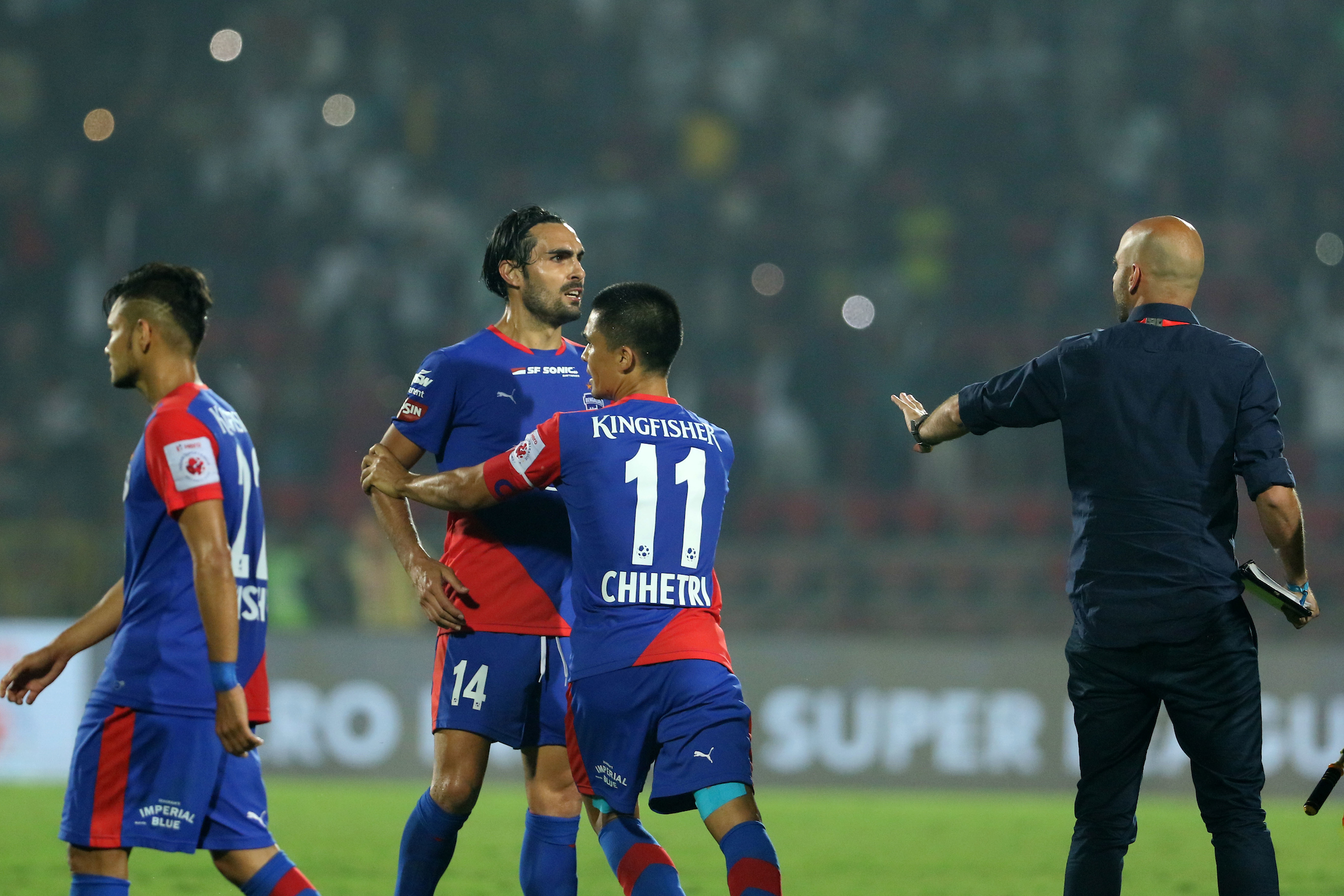 Dimas Delgado and Erik Paartalu have been key to Bengaluru's success with set-pieces....

Bengaluru FC concluded the league phase of the Indian Super League (ISL) with 22 goals in 18 games, a mere ratio of 1.2 goals per game. In their debut ISL season, the Blues managed 40 goals, with no other team scoring over 32.

With problems in the final third, the rest of the departments had to step up to get the results. The defence tightened up at the back, conceding just 13 goals and keep 10 clean sheets. The two men at the centre of the park – Erik Paartalu and Dimas Delgado – have played their part, making it their onus to supply Bengaluru with a good number of goal-scoring opportunities, especially on the dead ball.

14 of the 22 goals scored by the defending champions have come from set-pieces. While the lack of goals from open play remains a concern, mastery of set-plays deserves appreciation. Scoring from the dead ball is an art and one that Carles Cuadrat has mastered to near-perfection during his time with the southern club.

When the Spanish gaffer took over the South Indian club in 2018, he was expected to revolutionise the set-piece culture of the club, based on the fact that he was a specialist in that arena when he was second in command to Albert Roca.

Carles has established Bengaluru as arguably the best side on the dead ball. The training ground routines, movement in the box and the unpredictability of the delivery have made them a force to be reckoned with. However, Dimas and Paartalu have been the x-factor behind their prolificacy on the set-piece.

The Spanish midfielder has been a source of inch-perfect deliveries, whereas the Australian has made the difference from the other end of the cross. It is incredible how the Blues don’t like to crowd the box with players, and yet Dimas swings in an accurate delivery more often than not. And Paartalu's physique ensures he is more often than not well placed to meet the delivery into the box.

Both midfielders boast of five assists each and most of those have arrived from set-plays. Paartalu also has two goals to his name, both from set-pieces and a couple of his assists too have arrived from similar situations where he has cushioned it down to a player for a shot.

Dimas’ only goal this season arrived from the dead ball when he struck a perfect free-kick from the edge of the box against ATK in the final game of the league phase.

terBoth the players have been a part of the club for about three years now. In ISL terms, this is a huge period for a pair to stay as midfield partners. Perhaps this has been one of the key factors behind their success as a duo. The chemistry built over three years is bound to pay dividends and their link-ups – in open play and set-pieces – serves as evidence.

It’s worth noting how Bengaluru are not only good at attacking through set-pieces, but also at defending them. This again is a product of good communication and organisation at the back. The presence of Juanan Gonzalez has also helped them win the 50-50 aerial balls and thwart away the danger.

A goal from a set-piece earned the Blues the ISL title last season. One wouldn’t put it past them to repeat the same this time.