With the Selecao already comfortably qualified for Russia, they may play a weakened side against Chile and make life difficult for their rivals

Lionel Messi and Argentina's hopes of reaching the World Cup automatically could depend on Neymar's Brazil defeating Chile in their final qualifer on Tuesday night.

Brazil became the second team to qualify for the World Cup in March, joining hosts Russia in the 2018 tournament with four matches to spare.

Since then, Selecao boss Tite has used the remaining games to test out the depth of his squad, handing a debut to Monaco's Jemerson and giving Manchester City's Ederson a chance to stay with the panel. With qualification secure, Brazil have taken the foot off the pedal, drawing with both Colombia and Bolivia.

In their last qualifier on Tuesday, Brazil host Chile in Sao Paulo with Paris Saint-Germain star Neymar looking to add to his 52 international goals in 80 appearances.

Tite's men have only bragging rights to play for, but a win would guarantee automatic qualification for Chile. However, a Chile win could also have ramifications for Neymar's former team-mate Lionel Messi and Argentina.

Chile have been poor in the qualifying campaign, and are on the brink of elimination heading into their final game. Jorge Sampaoli's side know a win will guarantee them at least a spot in the playoffs, due to the fact the two teams just above them face off in their last match.

At the moment, Colombia sit on 26 points with Peru on 25 points, while Argentina's 25 points but worse goals scored statistic sees them sit in sixth, where they would miss out on a play-off spot against the winners of Oceania: New Zealand. 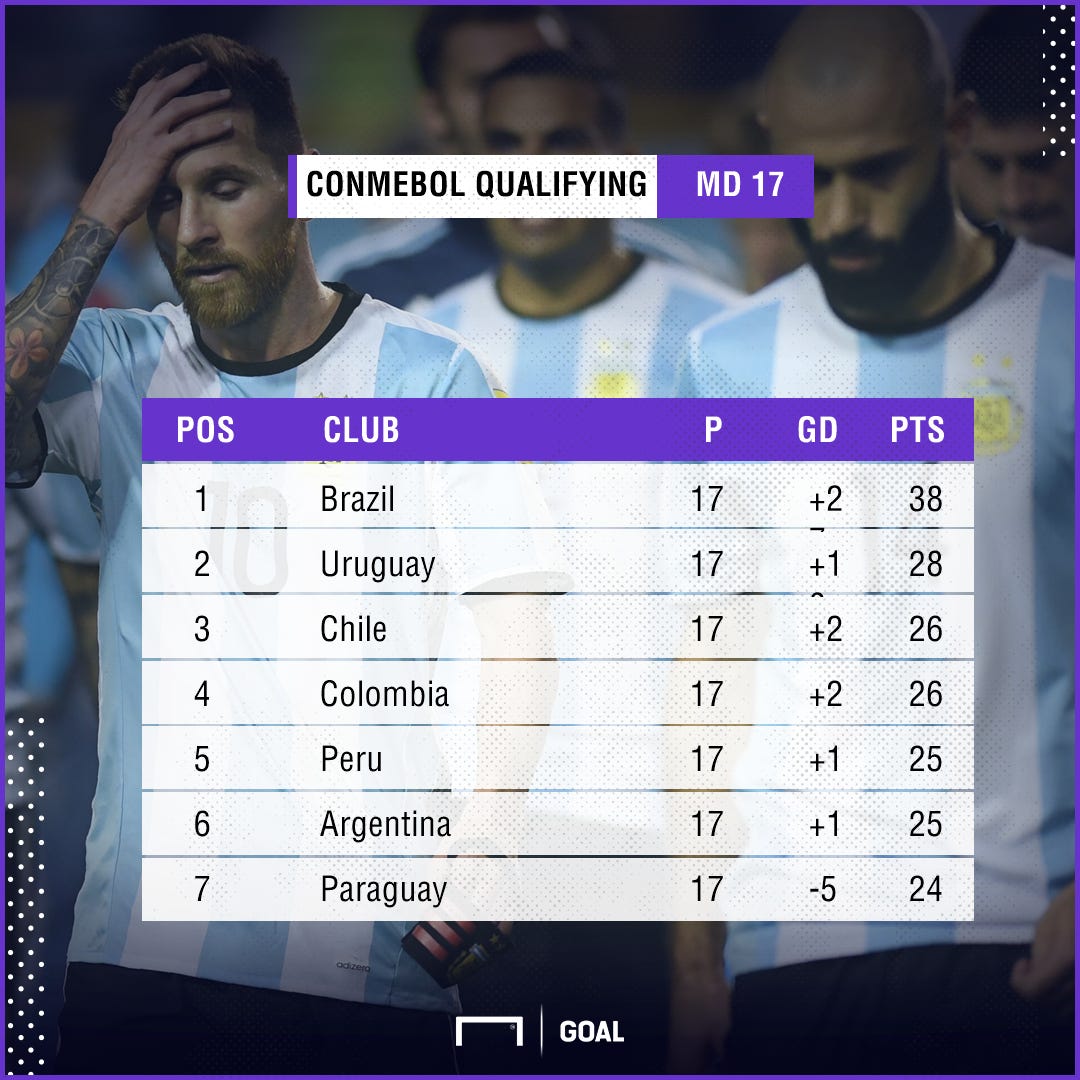 Argentina have scored 10 goals fewer than Peru in qualifying thanks to their inability to find the net from open play. It is now 456 minutes since any Albiceleste player found the net from open play, and despite being heavy favourites against Peru in their last game, they were inept in attack, even with five-time Ballon d'Or winner Messi pulling the strings.

Sampaoli's side are favourites again as they take on Ecuador, but may struggle once again, especially at altitude in Quito. Even if they do turn things around and defeat Ecuador, victory may not be enough to guarantee them a spot in Russia. Old enemies Brazil could do Chile a favour in Sao Paulo and send them into that play-off with New Zealand.

Brazil and Argentina have had a long-standing hatred of each other on the football field, which FIFA has called 'the essence of football rivalry'. This has included abandoned matches, fan trouble, sendings off and the historic Pele-Diego Maradona competition for world's best player.

With Pele naming Neymar as his successor and Maradona doing the same for Messi, the rivalry continues on and off the field today. Neymar left Barcelona to get out of Messi's shadow and become the best player in the world.

The 25-year-old is Brazil's top scorer in qualifying and will surely be one of the stars of the tournament next summer. Should Brazil lose to Chile, they could do Neymar a favour and ensure his biggest continental rival does not have the same safe passage to Russia.