He's bossed Messi, Neymar and Mbappe but what happens next for Arsenal loanee Saliba? 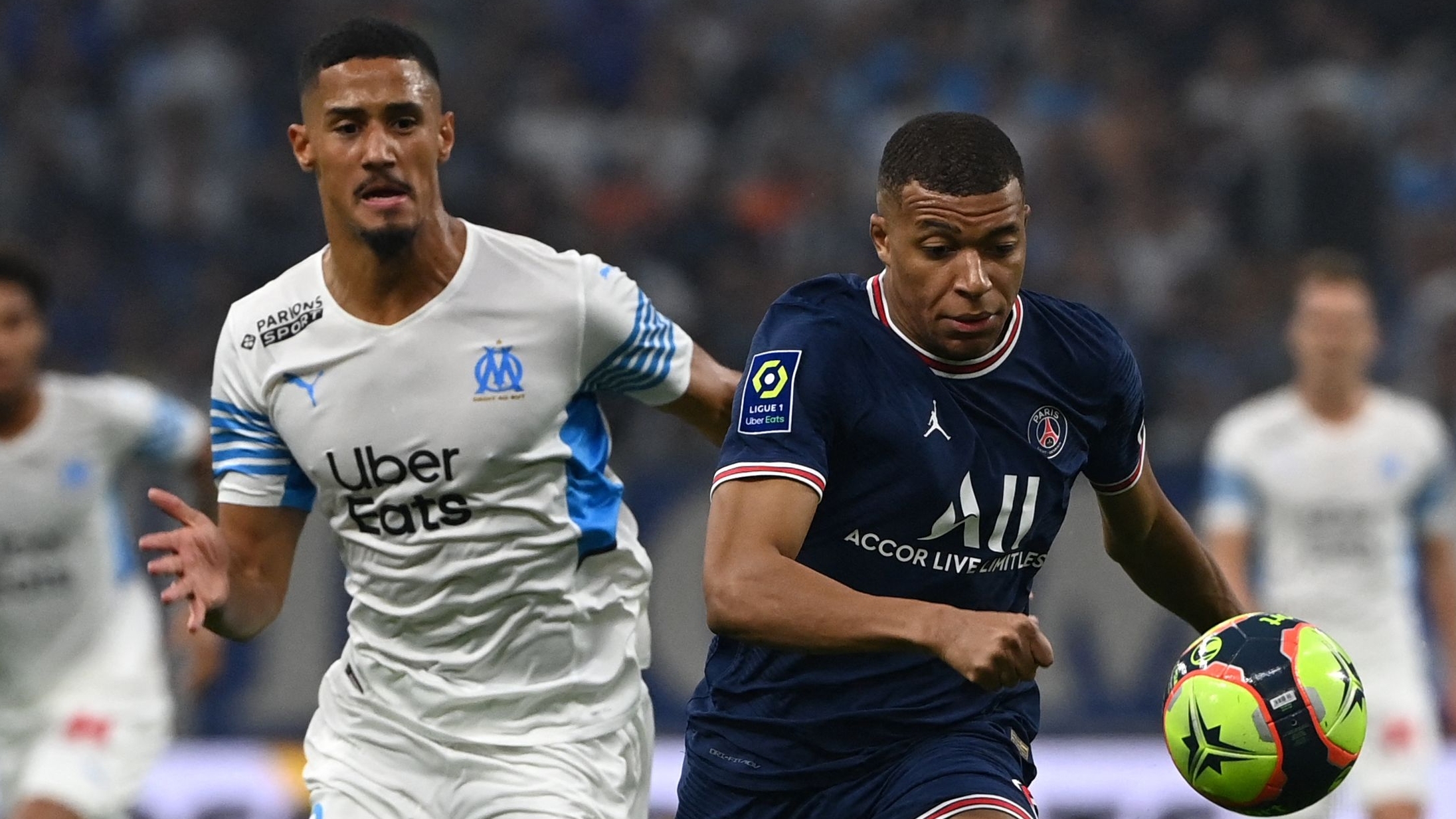 The on-loan Gunners defender put in another fine performance as Marseille shut out PSG on Sunday, but his Arsenal future remains unclear

There were just under eight minutes remaining when Lionel Messi’s through ball looked to have sent Kylian Mbappe through on goal on Sunday night.

With the game locked at 0-0, the France international must have thought he was about to strike at the decisive moment in Paris Saint-Germain’s clash at bitter rivals Marseille .

But suddenly the outstretched leg of William Saliba got the faintest touch on the ball as he slid in on Mbappe and the opportunity was gone.

Saliba celebrated as if he’d just scored the winner himself.

It was a match-saving tackle, with the game ending goalless , and one that summed up the start to the season the Arsenal loanee has enjoyed in France.

"It was the best match of my career," the 20-year-old told  Le Parisien afterwards.

“We gave a good account of ourselves, we fought until the end, and because of the atmosphere it was the most beautiful match of my career.”

Saliba has earned plaudits for his performances from pundits across France and has been named in Ligue 1’s team of the month for both September and October.

“The one that impresses me the most is “Willie” (Saliba),” said former West Ham favourite and current Marseille star Dimitri Payet, when asked a question about all of the club’s summer signings.

“Considering what he’s been doing since the start of the season, I don’t understand why he hasn’t played more for Arsenal.”

And that is a view shared by many Arsenal fans, who are still baffled that the centre-back - signed for £27 million ($37m) from Saint-Etienne more than two years ago - has yet to play a single competitive minute for the club.

Saliba’s name trends on social media every time he has a good performance for Marseille, just as it did on Sunday evening.

The way such a talented player has been handled by Arsenal remains a mystery to many, with plenty of supporters believing he should have been given a chance to impress by now.

But so far Mikel Arteta has remained unmoved.

Arsenal's manager sent Saliba to Nice for the second half of last season having deemed him only good enough to feature for Arsenal’s under-23s side during the first half of the campaign.

And then in the summer he was allowed to leave on loan again, with Marseille the lucky recipients.

“Together with William, we have decided it will be good for his continued development to spend another season on loan,’ said Arsenal’s technical director Edu, when the transfer was confirmed.

“William joined us as an 18-year-old, and he is still only 20, so he is still developing all the time.

“He is a player with strong natural ability and next season has the potential to be really beneficial for him at Marseille, a good club.”

Now, three months into his loan spell in the south of France, the season is certainly proving to be hugely beneficial to Saliba - just as Edu predicted.

The question many Arsenal fans have, however, is why couldn’t the centre-back be a lynchpin for Arteta’s side right now?

Some have suggested that Saliba is not ready for the Premier League, but his performances in France suggest otherwise.

Ligue 1 may not be deemed to be of the same standard as the English top flight, but it is still one of the top leagues in Europe. There are plenty of examples of young players making the step up from Ligue 1 to the Premier League quite comfortably, including current Arsenal centre-back Gabriel Magalhaes.

"I know that sometimes it’s difficult to explain or understand after the money that the club has spent trying to bring him in, to send him on loan,” Arteta has previously explained when discussing Saliba’s situation.

"But a lot of things have happened to him. He's a long-term player for us and we need to protect him as well. And giving him three or four games is not enough.

"For him, he needs much more than that. He needs to play, play and play and enjoy his profession as well.

“And in order to do that I think we found the right club with him. Hopefully he can enjoy his football and be ready for us for next season."

There is no doubt Saliba is enjoying his football right now, as the match-saving tackle and subsequent celebration against PSG on Sunday night showed.

In his 12 appearances in all competitions he has helped keep five clean sheets. He has made 16 tackles with a success rate of 81.3 percent, that’s far higher than Ben White (20%) and Gabriel (55.6%).

So far he has made three blocks, 29 clearances, 18 interceptions and 80 recoveries, demonstrating an impressive ability to read the game for a player of such a young age.

One of the areas that had been suggested as a possible reason why Arteta felt Saliba wasn’t ready for the first team was his ability to play with the ball at his feet.

Of those 962, however, only 53 were long passes - but again his accuracy of 74% put him well ahead of Arsenal’s current centre-back pairing in that category.

So Saliba’s statistics back up his impressive performances and show that he is excelling in France. But what they also show is that Arsenal were right to send him out on loan once again.

Had they kept him, it is highly doubtful he would have played anywhere near to the 1080 minutes he has clocked up so far for Marseille this season.

Whether Arsenal should have spent £50m ($69m) on White in the summer, when they already had Saliba, may still be up for debate . But the fact is they did and White and Gabriel were always going to be Arteta’s first-choice centre-back pairing when fit.

So had Saliba remained in north London, he would have been left feeding on the scraps. He would no doubt have featured against West Brom and AFC Wimbledon in the Carabao Cup games and would have been preparing to face Leeds United in Tuesday night’s fourth-round clash at the Emirates Stadium.

But when Arsenal travel to Leicester on Saturday in the Premier League, the France U21s international would have been back on the bench or not even in the squad.

For a player of his age and with his potential, that is far from ideal. Playing week in, week out for Marseille, both domestically and in the Europa League, will be far more beneficial to him and his development.

“At that age, you need to be playing,” former Gunners defender Bacary Sagna told Goal , while discussing Saliba’s situation at Arsenal.

“He has big potential and in France, people know it.

“Sending him away is not a bad thing, it’s not a punishment. To me, it’s clever to send him [on loan] rather than him being on the bench or not even being in the squad.”

The big question will be what happens to Saliba at the end of the season.

He will have just two years left on his contract at Arsenal and, having failed to be given an opportunity during his first three years at the club, he could need some serious convincing that he is still viewed as a key part of the future.

Saliba has spoken publicly about his surprise at the way his initial time at Arsenal was managed by Arteta, so at some point he will want to be given some clarity about his long-term prospects at the Emirates, especially with White and Gabriel - who are just 24 and 23 respectively - showing signs of forming a very impressive partnership at the heart of the defence.

Sources at Arsenal continue to insist that Saliba remains a vital part of the club's future and point to the fact that they refused to include any option to buy in the loan deal they struck with Marseille last summer, unlike the deals they agreed for players such as Matteo Guendouzi - who is also on loan with Marseille - Lucas Torreira or Konstantinos Mavropanos.

They say that the plan remains for Saliba to return next summer after a successful season in Ligue 1, when the situation will be assessed once again.

The defender will go into any contract talks in a strong position, especially if the season continues for him in the fashion that it has started.

So for now, Saliba's priority will be to continue to impress in France and show that he is capable of going up against the very best.

There may be some in north London who are still to be convinced. But Mbappe, Messi and Neymar got a close-up view on Sunday night of just how good Arsenal's young loanee can be.