That Manchester United went into Wednesday's meeting with Paris Saint-Germain needing just a point to qualify for the Champions League knockout stages was, in a large part, down to the management of Ole Gunnar Solskjaer.

The much-maligned Norwegian coach had come up with tactical plans both against PSG in France and at home to RB Leipzig in their opening two European encounters that outwitted German duo Thomas Tuchel and Julian Nagelsmann, respectively.

United picked up maximum points from those clashes, leaving them top of a group that many felt they would struggle to qualify from when the draw was made in September.

Now, though, after winning just one of their three subsequent fixtures, their future in the continent's premier cup competition hangs by a thread heading into the final matchday.

Solskjaer must take his share of the blame for that being the case following a disastrous coaching display at Old Trafford that led to his side's 3-1 defeat.

If the treble-winning striker had got his tactics spot on in the reverse fixture, then the 4-2-3-1 system he deployed here left plenty to be desired.

Despite having twice beaten the Parisians by playing a three-man defence during his United reign, Solskjaer reverted to a back four so as to find space for Bruno Fernandes, Marcus Rashford, Anthony Martial and Edinson Cavani further forward.

Though a potent quartet in the final third, there is not much defensive nous between them, and as such the Red Devils were overrun in midfield in the opening stages, with Neymar taking advantage to give the visitors a sixth-minute lead. 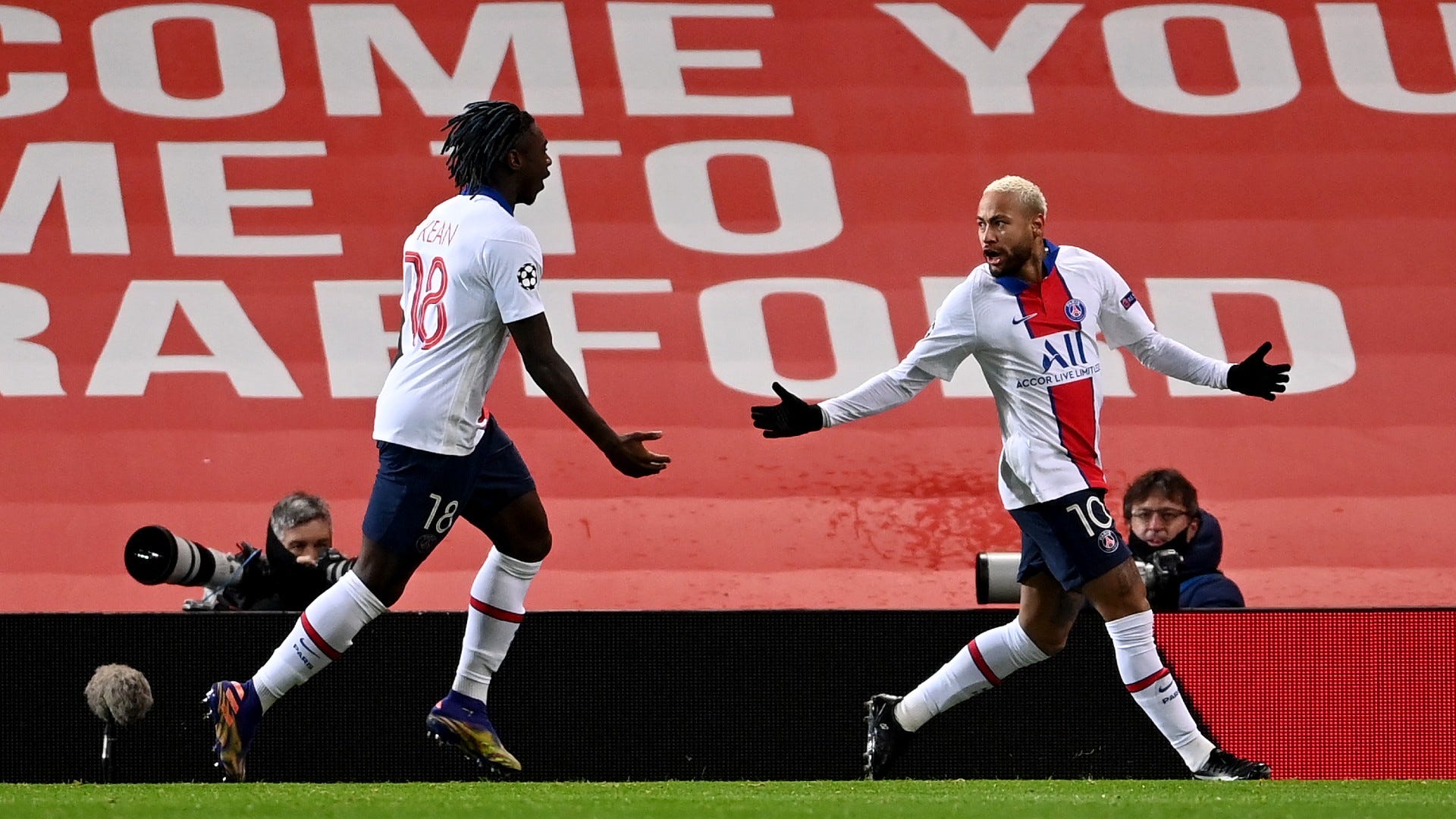 Solskjaer has grown to trust Scott McTominay and Fred as his midfield duo in United's biggest games over the course of the season, but here they struggled, with the latter putting in a memorable display for all the wrong reasons.

The Brazilian's running battle with Leandro Paredes was a theme of the evening, though it should only have lasted a quarter of the game after Fred inexplicably avoided a red card for a headbutt on the Argentine midway through the first half.

Instead he was shown a yellow card, and he was fortunate to avoid a second booking before half-time after another coming together with Paredes that actually saw the PSG man have his name taken.

It was clear that Fred was walking a disciplinary tightrope, and with both Donny van de Beek and Paul Pogba having warmed-up before the break, it seemed a foregone conclusion that the 27-year-old would be withdrawn, particularly given the five substitutions that are available to managers in the Champions League this season.

That Fred even appeared on the pitch for the second half was Solskjaer's biggest failing of the night, and if United do go onto exit the competition on Tuesday, that decision will only be further scrutinised by those who continue to believe that the Red Devils boss is out of his depth at the highest level. 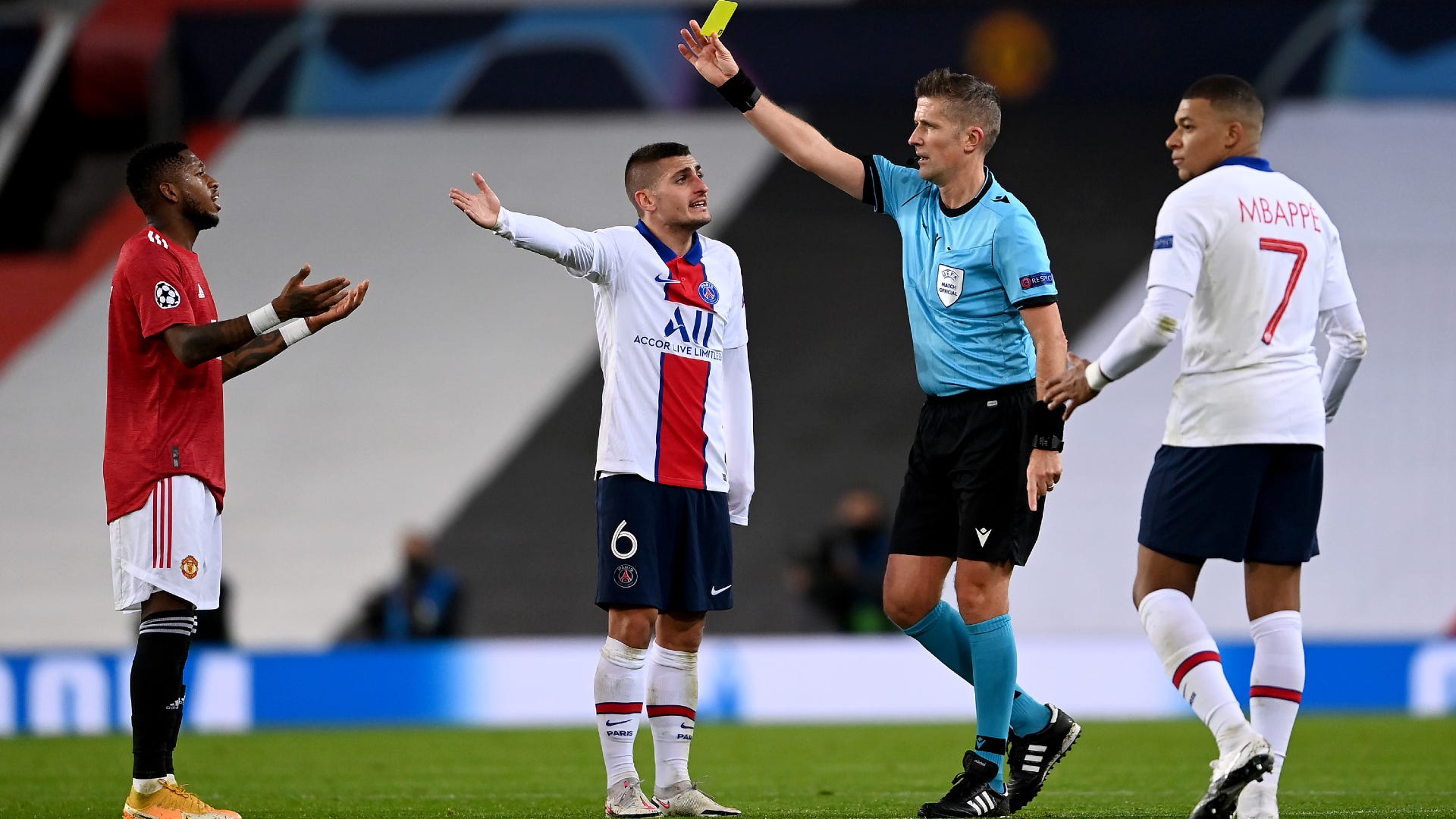 "There was no reason from his performance to take him off," Solskjaer said post-match, despite Fred eventually receiving his marching orders in the second half as goals from Marquinhos and Neymar sealed victory for the visitors.

"He was lucky to stay on first half. Fred knows he shouldn’t put his head towards someone even though he doesn’t touch him.

"I thought Fred kept his head and cool very well in the second half and he was unlucky with decision by the referee. You can say in hindsight to have 11 men would have been better, but who’s to say."

Not even Marcus Rashford's now obligatory goal against the Ligue 1 champions was enough this time for United, with the sight of the England striker limping straight down the tunnel midway through the second period a concern given the run of eight games in the next 27 days that faces Solskjaer's team.

That sequence includes Premier League clashes with Manchester City and Leicester City, a Carabao Cup quarter-final versus Everton and next week's now decisive visit to Leipzig.

United will still qualify if they avoid defeat against the Bundesliga outfit, but their 5-0 win in the first meeting should not disguise what a difficult task that promises to be.

It could have been over tonight. That it was not is as much on Solskjaer as it is Fred.