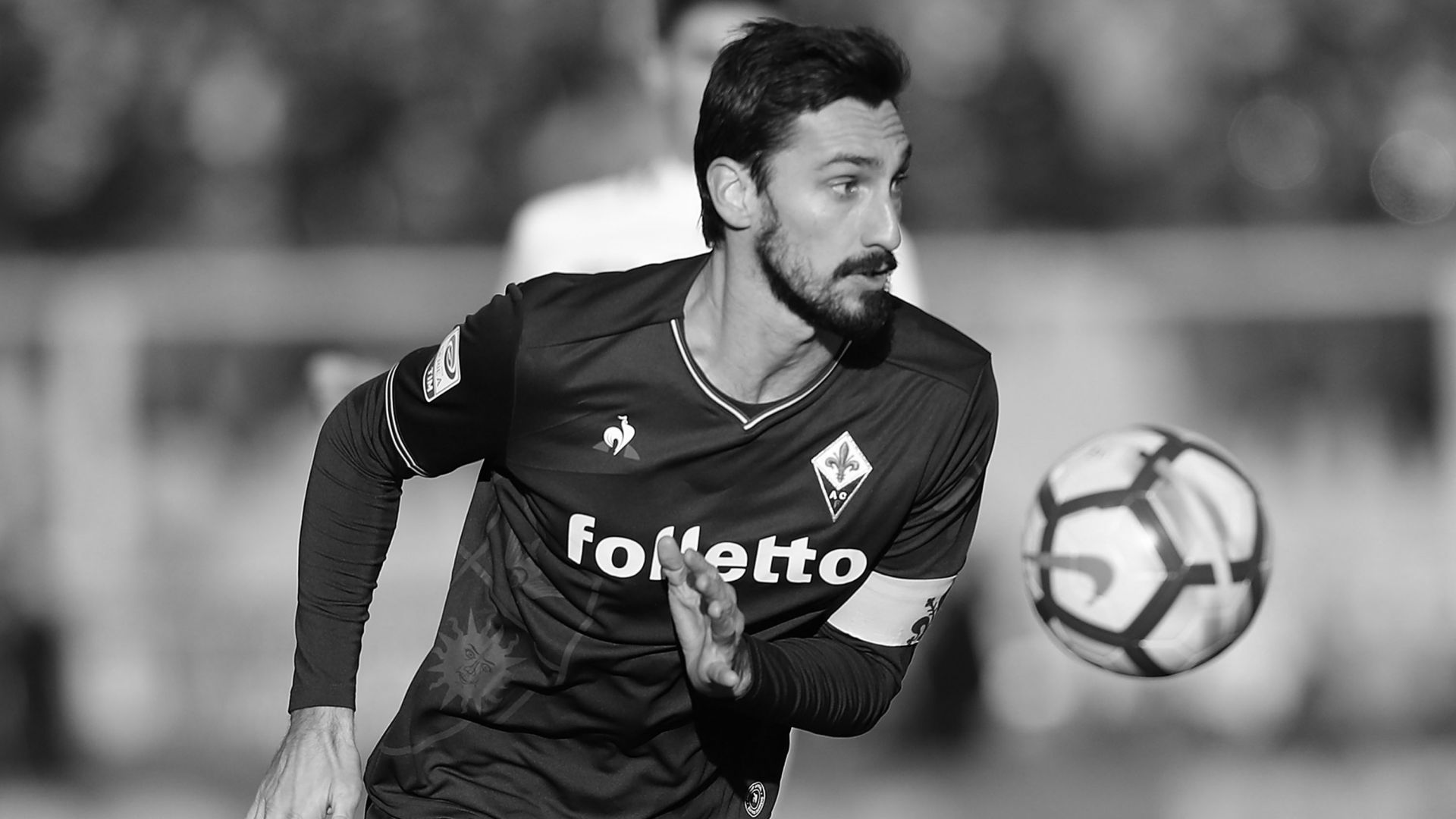 Tributes have flooded in from across the football world following the tragic announcement that Fiorentina captain Davide Astori has passed away at the age of 31.

The news was confirmed on Sunday morning in a statement from the Serie A side, which read: “Fiorentina are profoundly shaken and forced to announce that their captain Davide Astori has died.

“For this terrible and delicate situation, and above all out of respect for his family, we appeal to the sensitivity of the media.”

The centre-back, who had been capped 14 times by Italy, died suddenly in his sleep as Fiorentina prepared for a meeting with Udinese.

That game has been postponed as a mark of respect, with all other fixtures across the Italian top-flight following suit.

The news has rocked Astori’s fellow professionals, with many taking to social media to express their sadness and offer their condolences.

Former AC Milan midfielder Kevin Prince-Boateng was among the first.

Radja Nainggolan played alongside Astori at Cagliari and Roma, and posted: “A great player, but even more than that, a great person…How many battles we were in together at Cagliari, then found each other again at Roma… I still can’t believe it… My thoughts are with his family and those close to him… RIP.”

Roma director Monchi said: "I know the suffering, what you feel, the pain you feel because, unfortunately, I experienced it in person with the unfortunate Antonio Puerta. I wish a lot of courage to his family, his friends and his companions, to Fiorentina and to Italian football. RIP Davide Astori."

Franco Baresi, the legendary AC Milan defender admitted he was "speechless" at the news regarding a player who came through the San Siro side's ranks. "Incredulous, a tragedy, I am without words. I watched you grow up and was proud of the path you were making. I cling to the pain of your family. RIP Davide," he said.

Former Milan striker Alexandre Pato also paid tribute saying via his Weibo account: "I am very sad to know that Italian football player Davide Astori died today. No words. My deep condolences and thoughts are with his family.”

Former Italian Prime Minister Matteo Renzi, who is a Fiorentina supporter, posted: "It seems impossible to me. I am incredulous and I cry with your family and with all of Fiorentina. Ciao Capitano."

Borja Valero, who played with Astori at Fiorentina, said: "I cannot believe it, I do not want to believe it ... it's surreal ... rest in peace Davide."

Another former Viola star, Khouma Babacar, added: “I have no words to describe this marvellous person. I am not talking about on the pitch, but off it. Always smiling, you are the first to run towards me when I score a goal and even sprint 70 metres plus to reach me. Ciao brother. Condolences to all his family and to football, because there are few men like him in the world now.”

AC Milan and Italy centre-back Leonardo Bonucci also had a touching message: "Ciao Grande Asto. That's what I called you when we'd meet, for a game that saw us as opponents or for a Nazionale get-together. A smile, an embrace – one of the real ones – a person who was fair, honest and humble. How many times we laughed, joked and celebrated together. How many chats at the table sat side-by-side, or along the corridor that at Coverciano takes us to the [Italy training camp] bedrooms, on the pitch, or in the rooms. 'Come on Leo, do a sweeping pass like only you know how' was what you kept repeating to me during tactical training sessions. With that smile that never ended and that made it clear how much goodness there was within you. You have gone to play football up there and you'll do it with the same big smile. The smile you always had."

Roma icon Francesco Totti said: "Shocked, incredulous and speechless over this tragedy. I am close to the family and friends of Davide #Astori."

From Inter legend Javier Zanetti: "Rest in peace. Davide. There are no other words."

Andrea Pirlo added, suggesting that "in the end, the best always go first".

Albin Ekdal, who was at Cagliari with Astori:

I will miss you my friend Riposa in pace Davide pic.twitter.com/0hOz6AzEQx

Vincenzo Montella, who has previously spent time in charge of Fiorentina, posted: “There is pain that no word can represent. The sudden death of Davide is a wound that hurts the skin, the heart. His smile and his moral purity are within all of us who had the privilege to walk beside him. Ciao, captain.”

Former Milan and Juventus manager Carlo Ancelotti said: "What terrible news, how much sadness ... All my affection for the family and friends of Davide, Fiorentina and his fans, and all Italian football. We will not forget you. RIP."

Incredibly sad news.
My thoughts are with the family, friends and all at @acffiorentina
Rest in peace Davide#Astori pic.twitter.com/UBXs2LJKlT

Shocked about the terrible news about Davide #Astori. Thoughts are with his family, his friends and of course players and staff of @acffiorentina #RIP pic.twitter.com/vyL2B7ZEfU

Real Madrid skipper Sergio Ramos aired his shock at the news: "Shocked by the sad news of the death of Davide Astori. A hug to his family and all of @acffiorentina. Rest in peace, captain. Riposa in Pace, captain."

Clubs and associations have also paid tribute to Astori.

The FIGC's thoughts are with the directors, coaches and staff who knew and respected Davide throughout Italian football, while we also offer our most profound condolences to the Astori family. pic.twitter.com/nCQbfmyPwN

A man who loved football and who grew up as footballer with us. #ACMilan are shocked by the passing of Davide #Astori. It is with great sadness that we offer our deepest condolences to his family and closed ones and to ACF Fiorentina

On this day of tragedy, Juventus expresses its deepest condolences to Davide Astori’s family and Fiorentina.

The club is devastated to learn of the death of Davide Astori. The thoughts of everyone at AS Roma are with the player's family, friends and teammates at this terrible and tragic time. pic.twitter.com/vDlL4LIkJr

Everyone at SSC Napoli is shocked and saddened to hear of the sudden passing of Davide Astori. Our thoughts are with his family at this terrible time

Our thoughts are with the family and friends of Davide Astori who has passed away at the age of 31https://t.co/0jZmSbh8qU

Our sincerest condolences to the family and friends of @acffiorentina captain and Italian international Davide Astori, who passed away suddenly last night. pic.twitter.com/j8X2ZKzv4A

Everybody at Chelsea Football Club is shocked and saddened at the sudden death of Fiorentina captain Davide Astori. Our thoughts are with his family, friends and team-mates at this time.

Everyone at West Ham United is very saddened to hear of the sudden passing of Davide Astori. Our thoughts are with the family and friends of Davide at this difficult time.

We are deeply saddened to hear of the passing all too early of Davide Astori. The thoughts of everyone at the Club are with his friends and family at this extremely difficult time. pic.twitter.com/RSX2ra91So

We’re saddened by the passing of Fiorentina captain Davide Astori. Our condolences are with his friends and family.