The ex-Tottenham ace only joined the Nerazzurri in January, but has failed to lock down a regular starting spot and is now surplus to requirements

Sympathy for Christian Eriksen among Spurs fans will be in short supply right now.

The Denmark international knows full well that he upset many of his former followers by claiming that he would have a better chance of winning titles at Inter than Tottenham.

Still, it is difficult for neutrals not to feel a little sorry for Eriksen, who bagged two goals in a friendly against Pisa on Saturday and then learned 48 hours later that Arturo Vidal had arrived at Pinetina to effectively take his place in Antonio Conte's starting line-up for the Nerazzurri's Serie A opener against Fiorentina this weekend.

Eriksen's San Siro stay has been a disaster to date, but it is not as if it has all been his fault.

When the coronavirus outbreak prompted a nationwide lockdown shortly after his arrival in Italy, Eriksen had yet to find a house for his young family.

"I thought of talking to Romelu Lukaku and Ashley Young, but they already had families to look after, and 14 days sleeping on someone’s sofa is too long," Eriksen told Jyllands Posten.

He ended up staying at the club's training structure and, because he was forbidden from going outside for anything other than essential trips, he would run around the parking lot basement in a desperate bid to keep himself fit.

Eriksen's eagerness to return in peak physical condition after the suspension of play was understandable. After making his Serie A debut as a starter in a 2-0 win at Udinese on February 2, he was relegated to the bench for the next three games before lockdown.

Eriksen had been Inter's most noteworthy January signing, with his €20 million (£18m/$24m) transfer from Tottenham considered quite the coup for a team that was high on energy but short on creativity.

It was surprising, then, to see him used so sparingly, but even the attacking midfielder acknowledged before the resumption of the Serie A season in June that Italy had yet to see "the true Christian Eriksen".

We may never, because Vidal's transfer from Barcelona - which was eventually confirmed on Tuesday - cannot be viewed as anything but bad news for Eriksen.

It was Vidal, we have subsequently learned, that Nerazzurri coach Antonio Conte had wanted to sign in January - not Eriksen, which goes a long way towards explaining why the latter has seen so little game time. 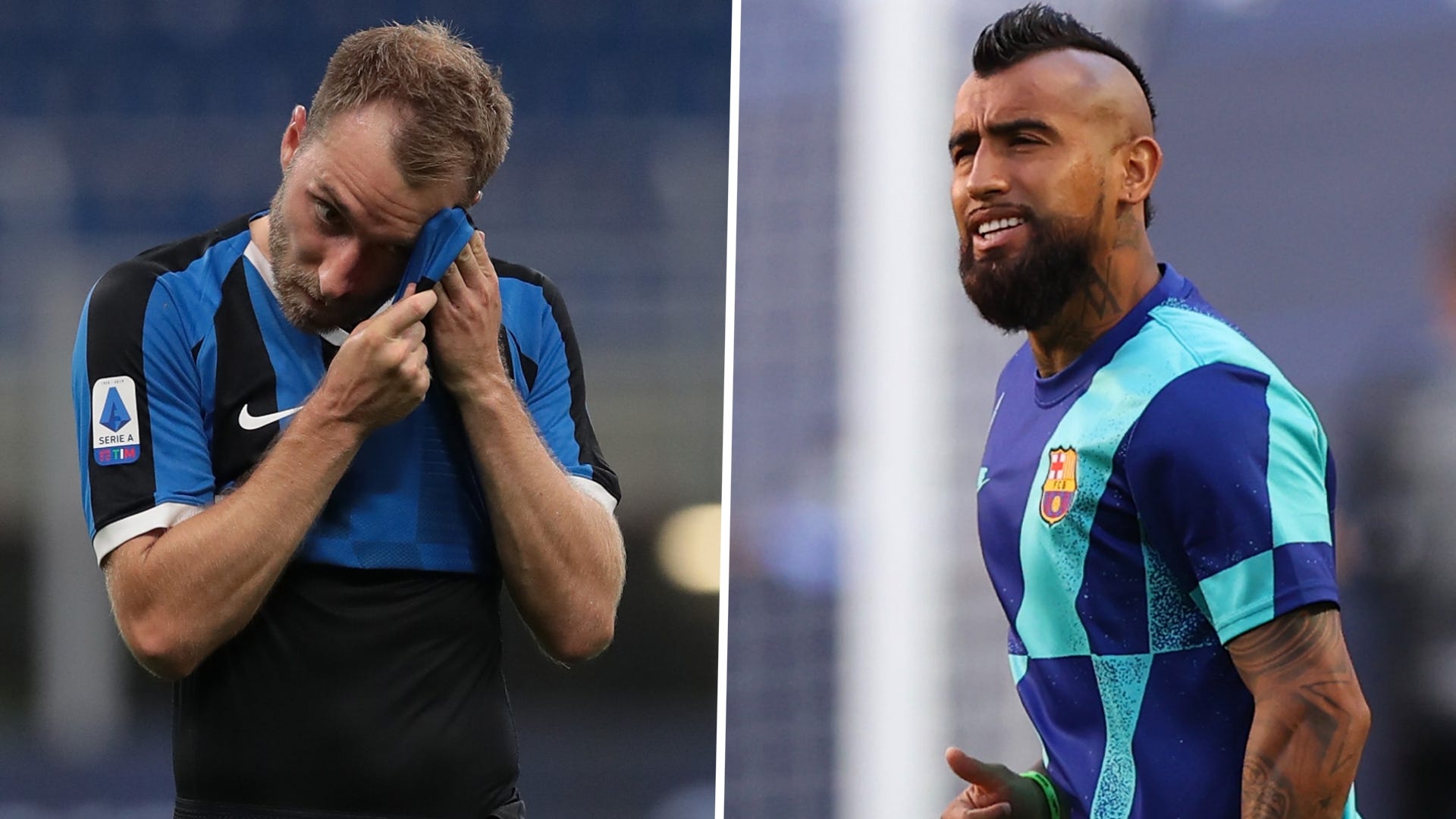 Inter's intense interest in his services played a pivotal role in Eriksen's decision to join the Italian giants, but it is telling that Conte only spoke once with the attacking midfielder before his arrival in Milan.

Evidently, it was the club, rather than the coach, who really wanted to make this deal happen. Indeed, when Conte met owner Steven Zhang for showdown talks over his own future last month, he pushed for a greater say in Inter's transfer strategy.

We are already seeing the effects of that accord, with the Nerazzurri effectively dropping their interest in Sandro Tonali, one of the most exciting prospects in Italian football, to sign the 33-year-old Vidal, a player with whom Conte won three consecutive Scudetti at Juventus.

The boss wants guarantees rather than promises; artisans rather than artists. And Vidal understands that perfectly well. He knows how demanding Conte can be but, crucially, he knows exactly what he wants from him.

Vidal established himself as arguably the best box-to-box midfielder in the world during his time in Turin. Conte is now banking on him performing the same role at San Siro, either alongside Nicolo Barella and Marcelo Brozovic in a midfield two, or just ahead of them.

Eriksen, by contrast, is less sure of where he fits into Conte's preferred 3-5-2 formation. Tellingly, he was aware right from the off that there could be systemic issues.

"I want to play where I can have the ball," Eriksen explained to the Gazzetta dello Sport shortly after his transfer. "It doesn’t matter where, but I need to stay in the middle of the pitch to create something going forward.

"Conte plays with three in the middle and it’s a bit different, but the most important thing is to have the chance to create."

He has barely had the chance to play, though, as Eriksen simply does not possess the requisite aggression – both physical and mental – that Conte simply expects of his players. 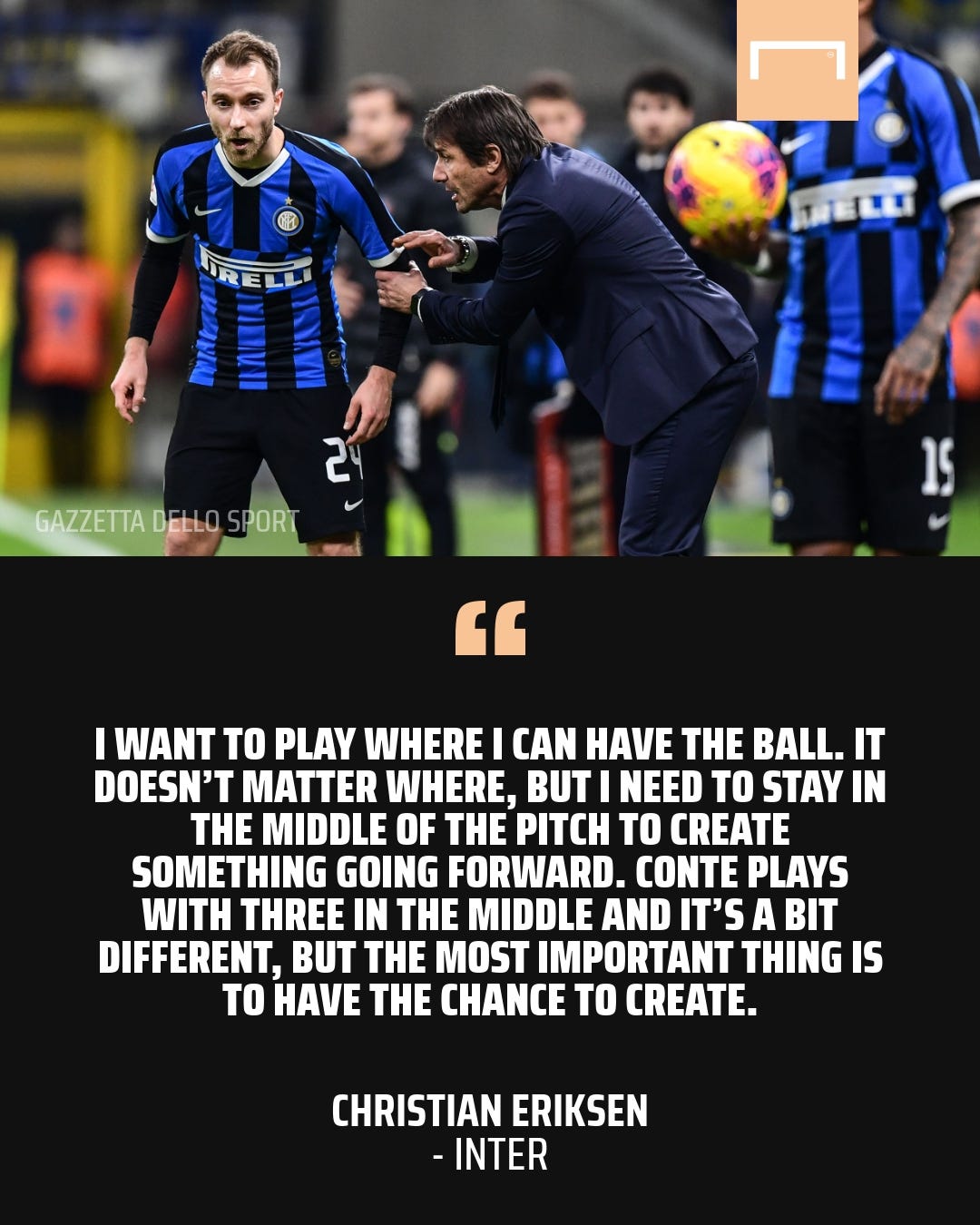 The attacking midfielder is willing to work hard but he is simply not going to play with the same physicality as someone like Vidal. Conte even alluded to this perceived flaw after Eriksen was afforded just six minutes of game time in a 3-1 win over Torino on July 13.

“When I pick a player, I don’t look from the neck up," the Italian told Sky Sport Italia. "He’s committed and doing well, but I have to make decisions for the good of Inter."

And that is likely to mean the club offloading a valuable asset who has been reduced to the role of impact sub. Eriksen featured 17 times in Serie A last season, but started only eight games, and contributed just two assists and one goal.

He played just 21 minutes across the Europa League semi-final and final clashes with Shakhtar Donetsk and Sevilla, respectively, making a sale look like the most likely outcome to this marriage of inconvenience.

Inter managed to sign Eriksen for a knockdown fee because his Spurs contract was expiring and, even accounting for the economic crisis caused by the coronavirus, they are confident of making a tidy profit on a player who, in theory, is still at the peak of his considerable powers.

Eriksen's attitude may have been rightly questioned by Spurs fans towards the tail end of his time in north London, but it would be difficult to fault his application in Milan. Even Conte himself has praised the playmaker for the way in which he has attempted to integrate himself both into the team, and the group.

At the end of the day, though, while Inter wanted Eriksen, Conte most certainly did not.