Premier League
Stephen Darwin
17:27 23/01/2017
twitter facebook reddit copy
Comments (0)
Getty Images
The former Gunners centre-back has hit back at a supporter who advised him to tell the midfielder to quit the Gunners following his red card on Sunday

The 24-year-old was sent off for a two-footed lunge on Steven Defour in the second half of the meeting at Emirates Stadium after he lost possession in the midfield area.

It's not the first time that Xhaka has found himself in trouble since moving to the club, with the former Gladbach midfielder having also seen red in October against Swansea City.

Indeed, Xhaka's latest dismissal is his fifth since the start of last season - the most of any player in Europe's top-five leagues. 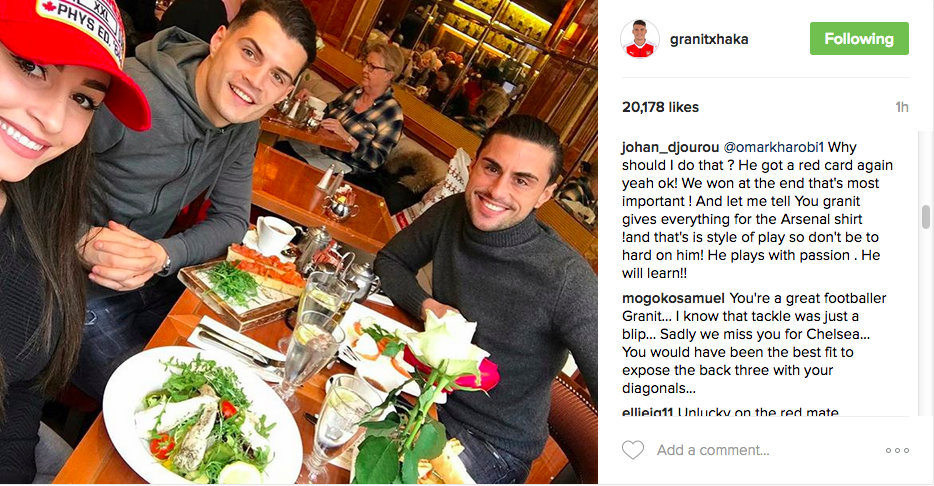 Xhaka's indiscipline has irked sections of the Gunners support, with club legend Thierry Henry having criticised the Swiss for his latest show of indiscipline.

But Djourou, an international team-mate of Xhaka's, has gone as far as responding to an Instagram message from a user that had asked the centre-back to tell his compatriot to leave the north Londoners.

In a passionate defence of the midfielder, Djourou wrote in reply: "Why should I do that [tell Xhaka to leave Arsenal]? He got a red card again, yeah okay! We won at the end, that's most important!

"And let me tell you, Granit gives everything for the Arsenal shirt and that's his style of play so don't be too hard on him! He plays with passion. He will learn!!"

Xhaka now faces a four-match ban if any potential appeal from the Gunners is unsuccessful, meaning he will miss the FA Cup meeting with Southampton as well as league games against the likes of Watford and Chelsea.