The team has star names like Chelsea’s Pernille Harder and rising stars like Real Madrid Sofie Svava, but didn’t make it to the 2022 quarter-finals

From the final of the Euros to crashing out in the group stages in the space of five years seems like an almighty fall from grace. That was Denmark’s fate on Saturday night as they succumbed to a late Marta Cardona header, one which dealt them a 1-0 defeat in a game against Spain that they had to win to progress.

Out of context, that seems like a failure. Some may have noted the Danes’ finish as runners-up in the Netherlands in 2017 and expected something special from them this time around too.

A look at their squad will have reinforced that idea. Chelsea star Pernille Harder, who almost certainly would’ve won the Ballon d’Or had it been awarded in 2020, is their captain.

She then has a supporting cast of rising stars, from Real Madrid’s Sofie Svava to Katherine Kuhl, the teenager who ranked at No.7 in GOAL’s 2022 NXGN list.

Yet there’s a lot more that must be considered when assessing their exit from this tournament. There’s a reason why, while twinged with disappointment, the post-match reaction from those of a Danish persuasion on Saturday was optimistic.

Where this team is and what it can do is not to be defined by Euro 2022.

That much was evident from the first match Lars Sondergaard’s team played in England. A 4-0 defeat at the hands of Germany was something of a “mental shock” for his team, he admitted, but Harder herself was quick to put things in context.

“[My message] is that we just can use this game as learning. We are still a really young team that is learning every day,” she said afterwards. “We are on a journey to get better every day. That's what it is.

“It's a whole new team since 2017. I think we had four players today starting from that team. We have a generational shift, young players coming in who are really talented and I'm sure that the future will be really good.” 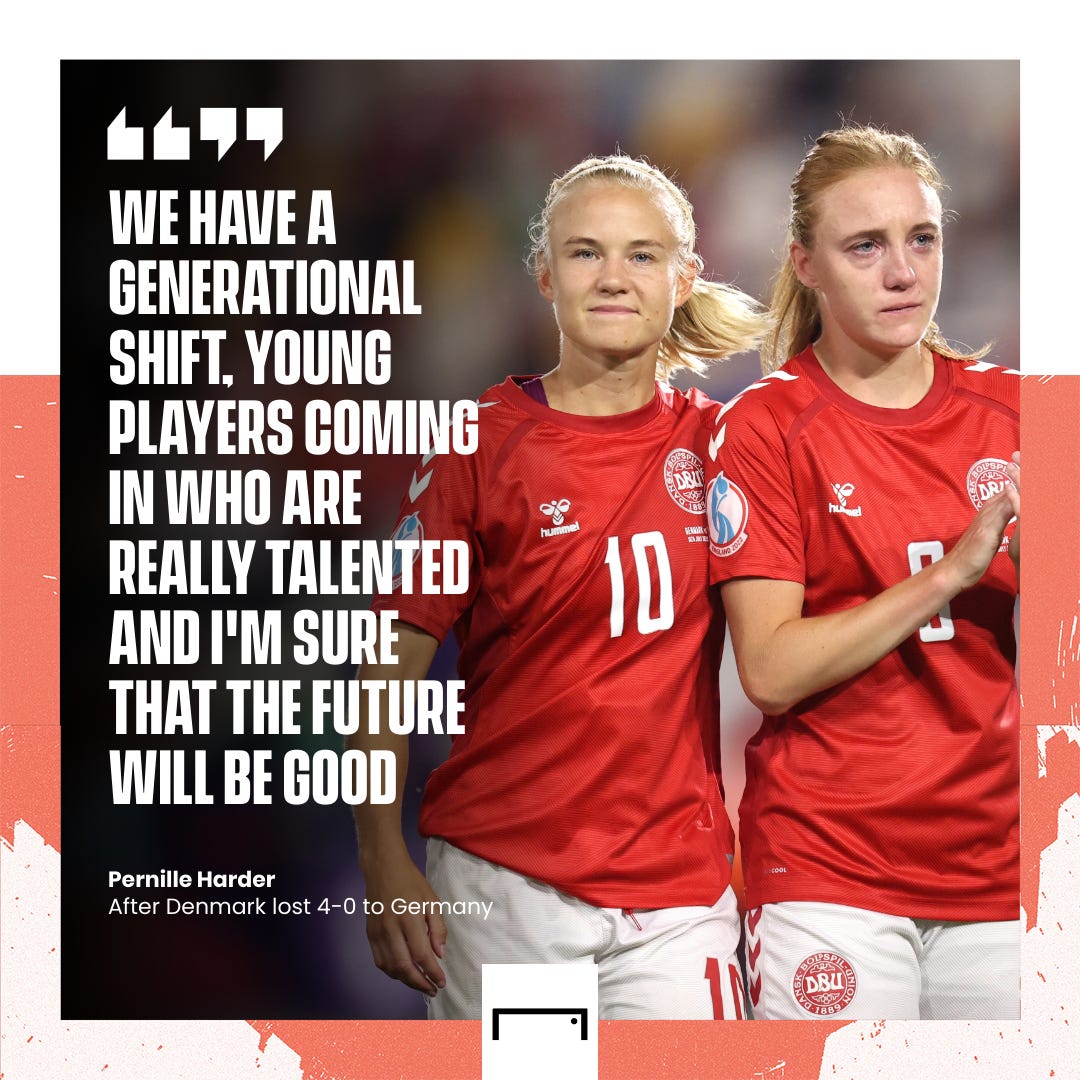 She’s right. Only nine players in this squad were involved in the incredible run to the final in 2017. Thirteen players have fewer than 25 caps.

Of those 13, 12 have never been to a major tournament and 12 are also yet to celebrate their 25th birthday. You can also add in the fact that they have a different manager from five years ago.

Being drawn into this ‘group of death’ under these circumstances was always going to be tough, but that doesn’t mean that this summer should be forgotten about, as it is an important step in what lies ahead.

After that huge defeat to Germany, it was always going to be interesting to see how a team not blessed with tons of experienced players would react.

They took on Finland, the group’s lowest-ranked nation, but one that had shown themselves in a great light in the opening game against Spain, scoring the fastest goal in the history of the Euros before eventually being beaten.

It wasn’t about putting in a performance, it was about getting a result, grinding one out. Denmark and its abundance of rising talent did that.

“Games like these can be hard mentally,” Sondergaard noted after the 1-0 victory. “So I think it was also a win from a mentality point of view today."

The growth from the Germany game to the Spain game was also another huge positive. Sondergaard was meticulous in his post-match analysis of the former. He knew the problems and he would go on to show he has the nous to solve them. 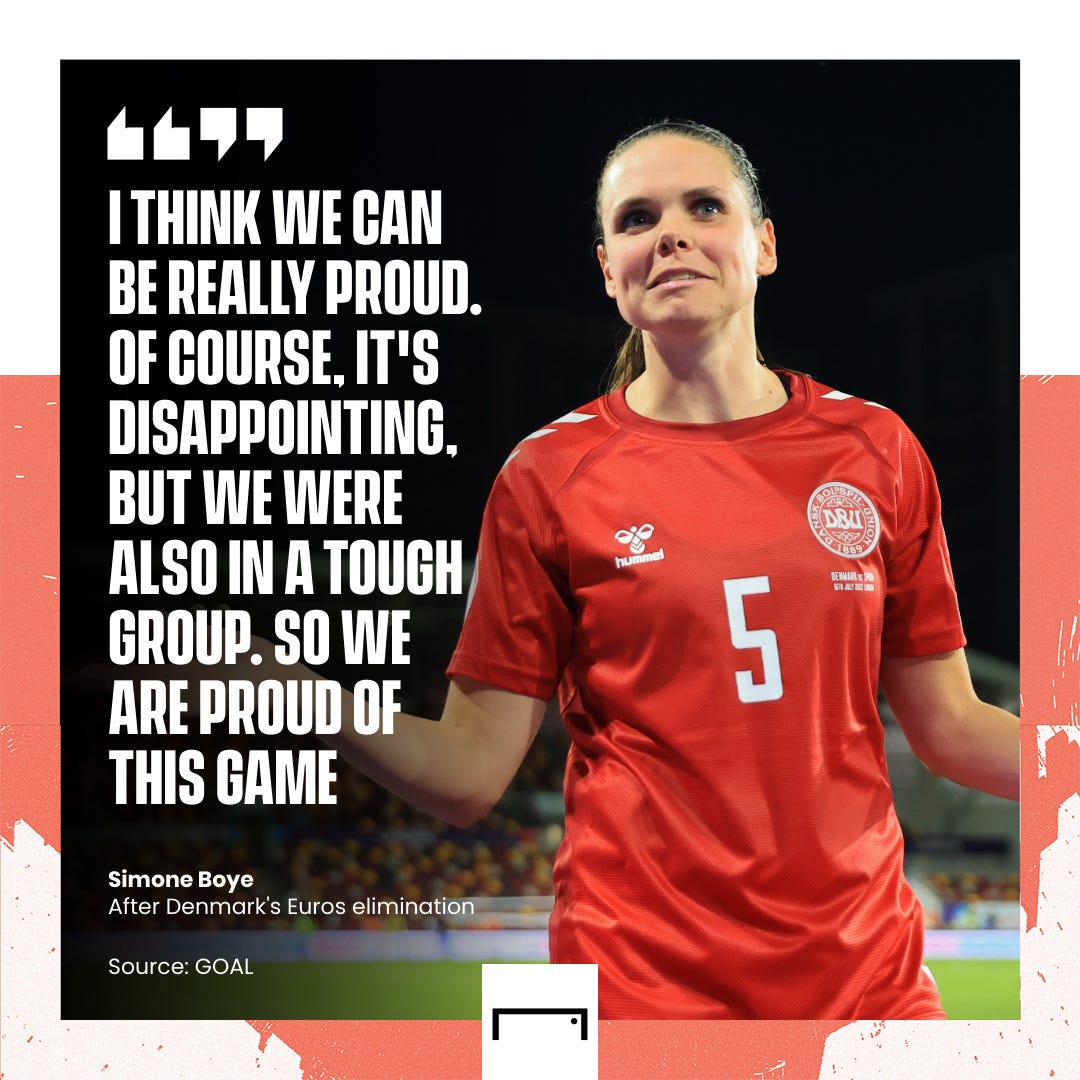 His game plan against the Spaniards was clever and created opportunities for the team – but there are still those elements of growth and experience that need to happen for them to have the composure to take them. The team spirit, the determined defending and cohesion when on the back foot were admirable, too.

“I think it helps a lot,” Simone Boye, the Denmark defender who just left Arsenal, said when GOAL asked how much the players in this squad will benefit from their first major tournament experience.

“I think especially because in the qualifiers, you don't play a lot of big teams, so we are used to having the ball a lot, not defending all game, and I think when you play Germany, Spain, you need to be okay with them having the ball and be okay with being under pressure until you can get into the game again.

“I think that's something we can really learn from this tournament that, when we meet good teams, we will get under pressure and that's okay. We just need to figure out how to deal with it. So for sure, I think the more games you play against bigger teams, the better. Then you know what to expect and how to deal with it.”

At the 2023 Women’s World Cup, these players will draw on this experience. They will have more of an understanding of how to deal with different situations and, after another year together as a team, will have grown even more.

“I think it's really good that we can see that we can rise after we've been falling in the first game,” Boye added. “I think mentally we come out stronger from this tournament, especially playing a game like this against Spain.

“I think we can be really proud. Of course, it's disappointing, but we were also in a tough group. So we are proud of this game.”

Despite what it may look like on paper, comparing one tournament to another, this was not a failure for Denmark. It was simply a summer that will shape them as the clock counting down to the World Cup ticks under 12 months.

“I think we will be much stronger,” Boye believes – and she has plenty of reason to.