The midfielder was only 16 when she was named Player of the Match in the Danish Cup final, and is now eyeing a starting role at Euro 2022

When GOAL sits down to talk with Katherine Kuhl, the 18-year-old Denmark international who ranks at No.7 in the NXGN 2022 list of the world's best teenage footballers, it is a phrase that she utters several times - so much so that she half-chuckles at herself on the third mention.

It is not a stock answer, though. It’s a genuine representation of how she has spent the first few years of what looks set to be a long, successful career, ticking off things that are on any footballer’s bucket list.

Playing in the top division in her home country? Check. Winning a major trophy? Check. Making her international debut? Check.

The latter was the craziest moment of her young career to date. Representing the national team was Kuhl’s biggest dream as a child. She watched Denmark on the television and just wanted to emulate the players wearing her country’s colours.

Aged 17, she had been playing well for her club, Nordsjaelland, and made an impression in Denmark’s youth ranks too. But when national team head coach, Lars Sondergaard, decided to reward her with her first senior call-up last April, "it was a total surprise."

“First, I didn't know his number, so I was thinking, 'Who is this? Who's calling me?'" Kuhl laughs, recalling the moment to GOAL.

"I called him back and he was like, 'we want to get you to play and just have a try to play'. I was thinking, 'oh my god, is this happening?' I couldn't imagine that it was real, because it has just been my dream since I was little.” 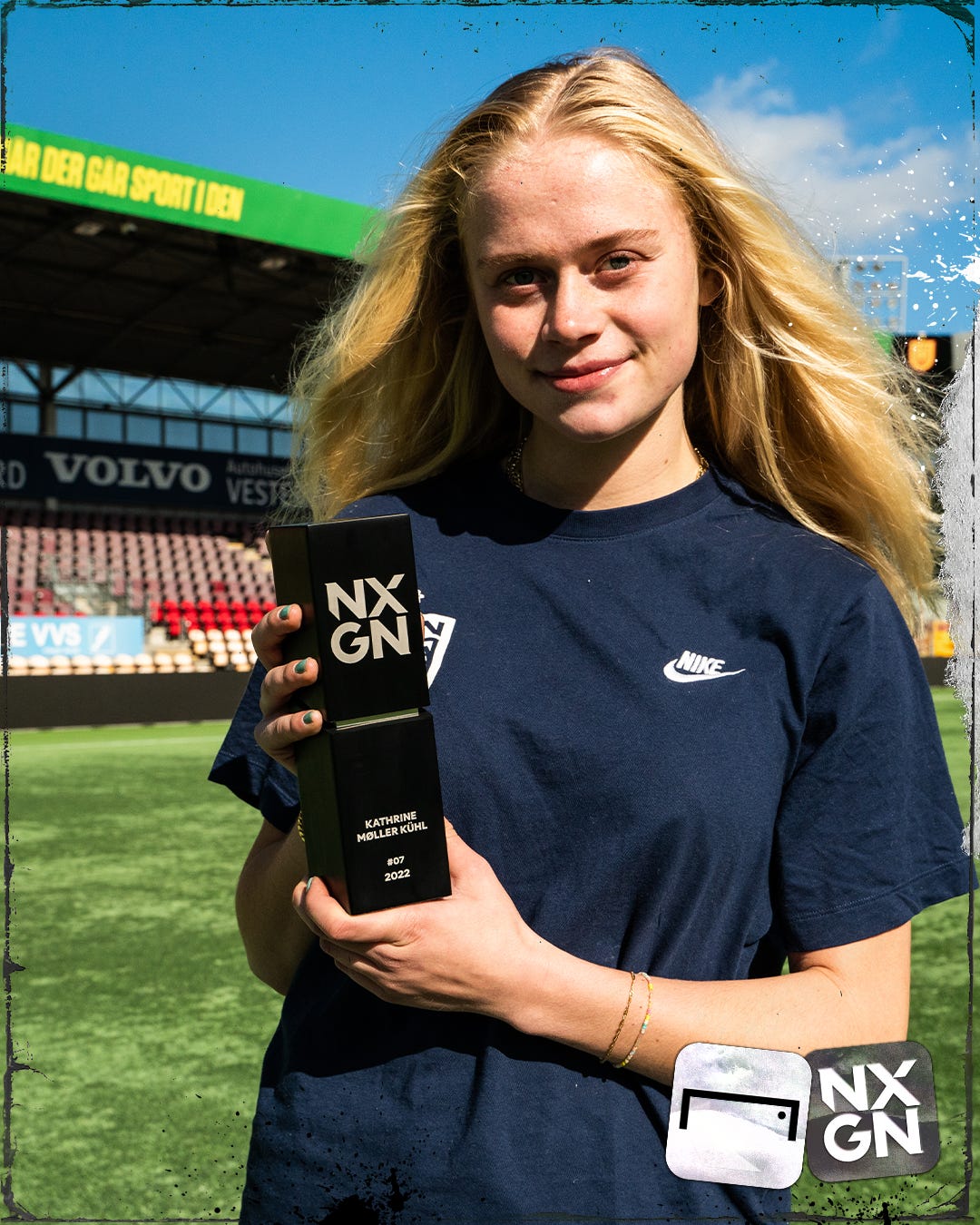 Kuhl ran up the stairs to find her mother as soon as the call finished, neither really able to comprehend what was going on.

“It was such a weird situation, but she was just happy and I don't know if she knew what it was in the beginning, because it was all so weird,” she says, still chuckling with a hint of disbelief.

“I just wanted to show that I can play at that level, and to see if I could play at that high level. It was actually quite easy to fit in the group because everyone is so sweet. Also, on the pitch, they're so helpful. I learned a lot in the first time I was with them. I was very grateful for that.

“I took it all in it because you don't know when you will have that experience again. That was important for me, to just enjoy and learn a lot.”

The origins of Kuhl’s rise lay in Hillerod, a small Danish town with a population of just over 30,000 people. It was there that Nordsjaelland’s talented midfielder was born and would play for several years.

A serial goalscorer as a youngster, Kuhl enjoyed playing football from the age of five, but would have some doubts as to whether she wanted to take the sport more seriously as she became a teenager.

“I feel like I stood between playing, not for fun, but not that seriously, and just playing very seriously,” she explains.

Fortunately for Nordsjaelland and Denmark, she would stick with it – and she is certainly reaping the rewards. A move to the former came shortly after, where she would establish herself as a regular starter aged 16.

The day before her 17th birthday, she lifted the Danish Women's Cup with the club – named Player of the Match in the final. “I was like, 'oh my god. I didn't even know that I played a good game!'” Kuhl remembers. “It was very special."

She is translating that talent to the international stage now, where she has made nine appearances for her country and scored her first international goal. It is a great environment for her to continue to develop, with the midfielders in the team having a particular impact on her.

“I feel like I've learned a lot of the positioning, especially defensively,” she explains. That’s something you simply have to develop when you’ve got former GOAL50 winner Pernille Harder running at you. “Yeah,” Kuhl laughs. “It’s hard!"

“It's also a good opportunity to get to communicate more, because I've experienced that it's so important when we play national games, because it's such a high level.” 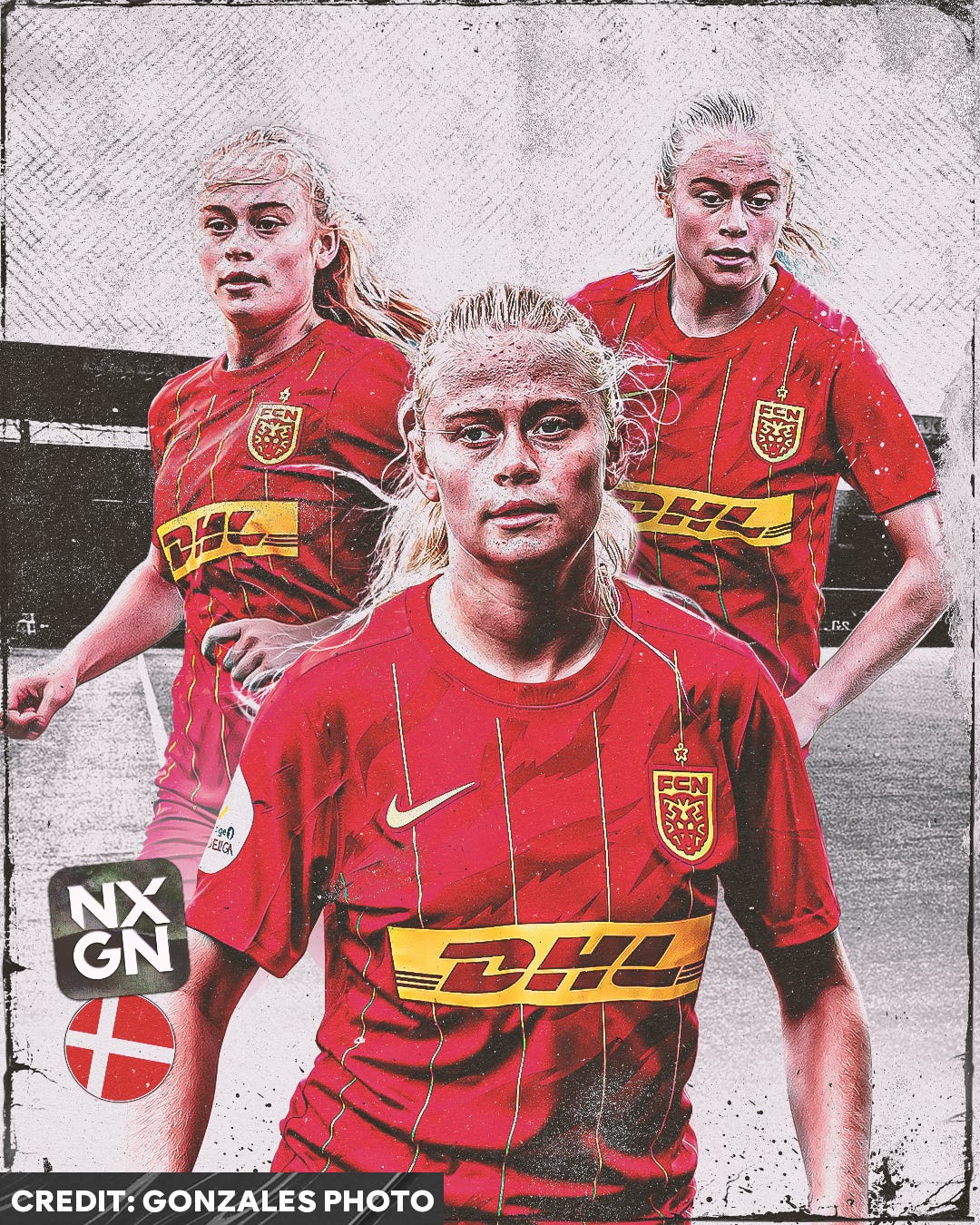 With her experiences, talent and attitude combined, the sky is the limit. The latter shines through in her chat with GOAL, her grounded personality prominent, as well as her desire to improve to reach the top.

“Personally, I want to be a more dangerous player. I'm not the player who scores the most goals,” Kuhl says. “I want to work on my finishing and my assist game also, to be a more important player.

“But my future goal is, of course, to play abroad and play in a big European club. That's one of my big dreams.”

Anywhere in particular? “As long as I can go to a good club, I'm happy. But, of course, the Spanish league. I really like how they play. They play very quick and with few touches, and they're very technical. But I've heard that the English league is growing and it's very good also, so that's also very interesting.”

Kuhl's biggest experience yet could be in the immediate future, though. The European Championship finals are only a few months away, and she has become a regular in not only the squads for Denmark, but the starting line-ups.

Five years ago, she watched on television as the players she now calls her team-mates finished as runners-up at the tournament. How would it feel if she was to be part of Sondergaard's final squad this time around?

“It would be another dream come true,” she says. ‘Another’ being the key word.