Borussia Dortmund are on something of a hot streak when it comes to young talent making the leap into their first team.

Christian Pulisic and Jadon Sancho have both become world-renowned names after being given first-team opportunities by the Bundesliga giants, and Giovanni Reyna is already well on the way to reaching similar heights after catching the eye with a string of substitute appearances since the turn of the year.

Hopes are high that Youssoufa Moukoko – the 15-year-old who has broken numerous goalscoring records while facing defenders up to four years his senior – will be next to grace the Westfalenstadion turf in the coming months, with Lucien Favre having revealed that he will soon be called up to train with the first team.

The path is clearly there for the world's most talented teenagers to earn their footballing stripes at Dortmund, and the next cab off the rank may well be the man set to replace Moukoko in their Under-19s side next season, Bradley Fink.

Fink left his native Switzerland in the spring of 2019 to join Dortmund, with his arrival actually announced on the same day as Reyna's after BVB forked out €190,000 (£166,00/$206,000) in compensation to sign the striker from FC Luzern, after he netted 40 goals in 21 appearances at Under-16 level last term.

That record helped Luzern, whom Fink joined as a nine-year-old from first club SC Cham, win the double at U-16 level – an achievement they had also secured the previous year as U-15s. Despite those performances, however, the young forward had only been promoted to represent the club's U-18s on four occasions, during which he contributed three further goals.

Likened to Harry Kane for his playing style, Fink – who has an English passport – has been a star in Switzerland for some time, with the teenager having starred in a trainers advert for Puma in 2018 while his record in his nation's U-17 side stands at seven goals in as many games. As such, his departure has caused some consternation in his homeland.

"We always showed Bradley the next step into the first team and made the appropriate career planning. But he obviously lost patience," said Luzern coach Genesio Colatrella, who used an interview with Zentralplus to point to statistics from the Swiss Football Association that highlighted the fact that just two of the last 86 players to make more than one appearance for the Switzerland national team moved abroad in their youth. 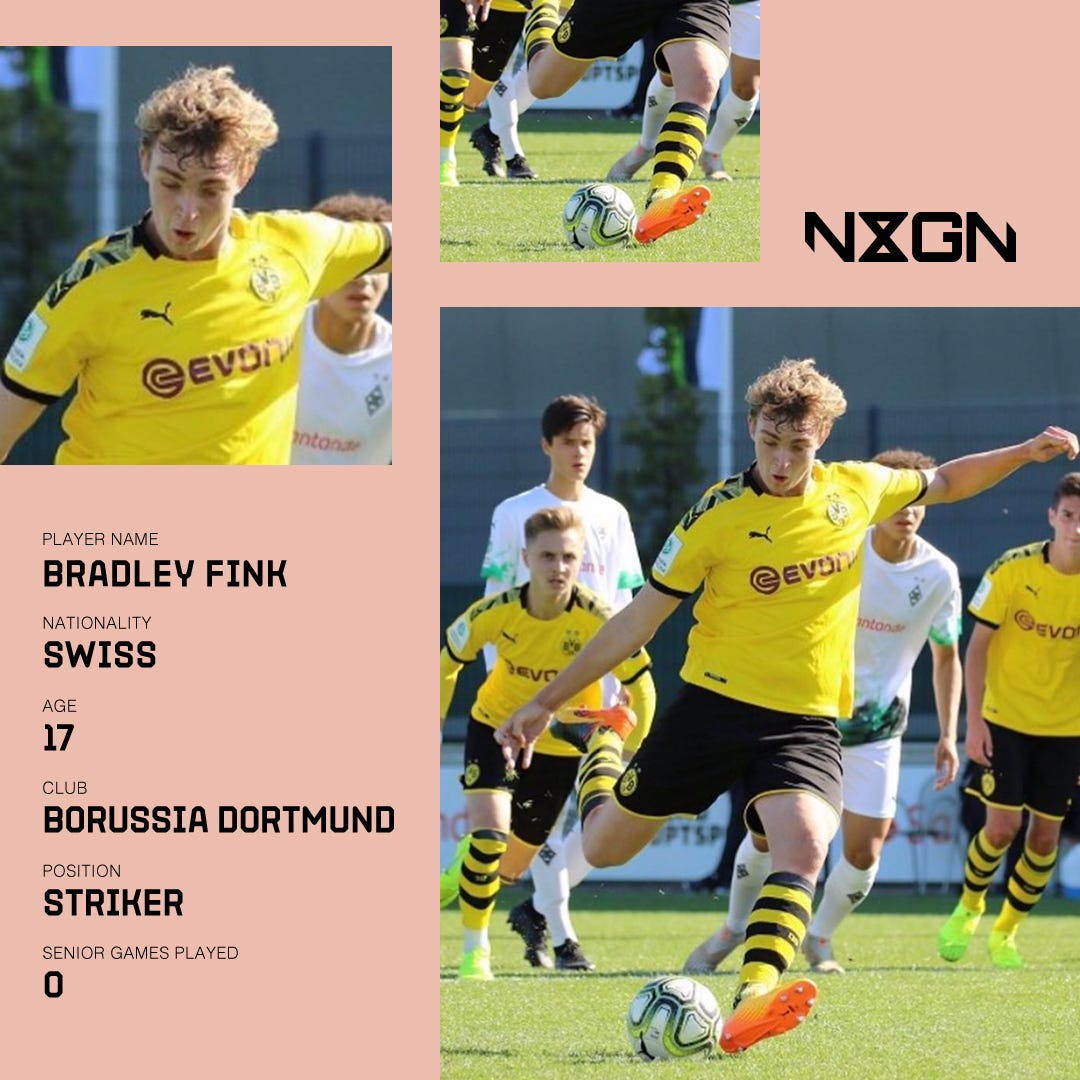 "It makes sense for the career planning of a great talent to have played at least in the Challenge League [Switzerland's second tier] before taking the plunge abroad. That is what I mean by serious career planning. The Germans have been watching Switzerland for some time to see how we work with the youngsters, so I don't know if you can really do better there."

Despite their attempts to convince Fink to stay, Luzern were powerless to stop the youngster from leaving given his lack of contract, with Dortmund having sent scouts to watch him on at least 15 occasions before eventually laying out their offer of a three-year contract.

"We had inquiries from 16 other clubs that also came to us directly through or our consultant," Fink's father, Thomas, told Zentralplus when explaining the reasons for choosing Dortmund as a destination. "Luzern explained to us the plan that Bradley would be training with the first team from June 17, when the decision to join Dortmund had already been made.

"We preferred Bradley be able to fine-tune and work on the details of his game for at least two years in the youth teams. We wanted a club that relies on the young players, if not to say, depends on successful youngsters.

"We also wanted his club to present a 'Bradley Fink Project' rather than signing four or five talents in his position, one of whom will make it and the rest will more or less be left behind

The current status of the 'Bradley Fink Project' is certainly a positive one, with Fink having scored 12 goals and laid on four assists in 18 appearances for Dortmund's U-17s so far this season, and the next steps in his development are already laid out in front of him.

"Brad will play for BVB's U-19s in the summer. He is on the right track," Dortmund U-17 coach Sebastian Geppert told Goal and SPOX. "He is technically savvy, has good control but can also pass the ball on quickly. He is always looking for the direct way to the penalty area and can shoot with both feet. He also works aggressively when out of possession.

"He is a good guy with rough edges. There were days when we trained in the morning, at noon and in the evening and the boys were totally exhausted and tired. As a result, we cancelled our early morning training the next morning, but Brad preferred to train."

It is that drive that is helping Fink to make a success of his young career. He currently spends four nights a week at Dortmund's training centre with up to 24 other youth players before joining his parents at his mother's apartment at nearby Lake Phoenix over the weekend.

"During the first three-to-four training sessions I was a bit scared, but then I got used to it very quickly," Fink recalls. "My development plan is medium to long-term, which usually means two-and-a-half years of fine-tuning in the youth sector.

"It was my big dream to run out at the Swisspor Arena [Luzern's home stadium]. But I think my chances of becoming a professional are higher at Dortmund than they were at Luzern."

"My dream has now changed. My goal is to play for Dortmund in front of 80,000 spectators."

The early signs are that it is a dream that may well come true.