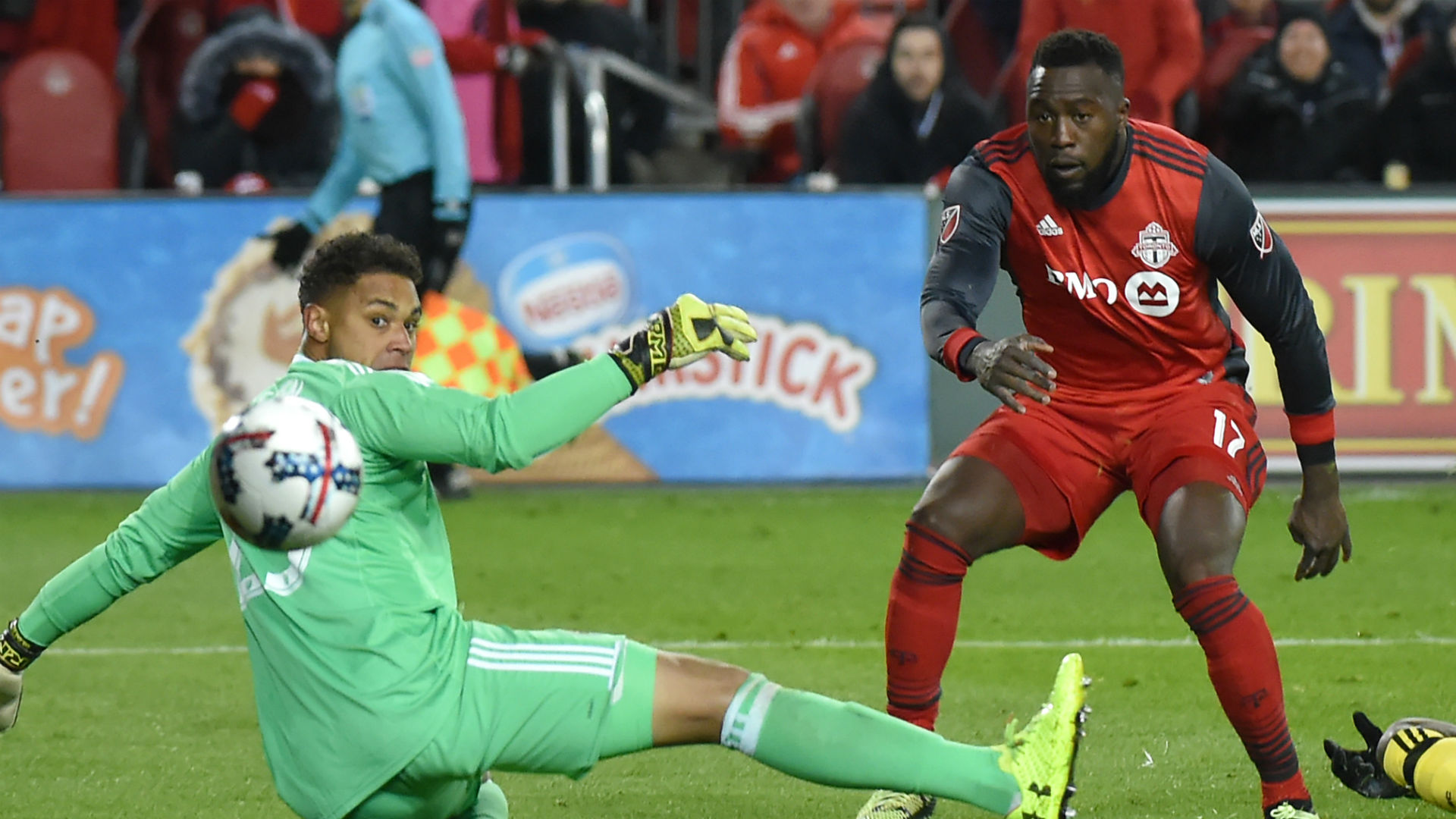 The U.S. national team striker shook off an ankle injury long enough to score a series-clinching goal and earn some redemption after a rough stretch

Jozy Altidore dropped to the ground at BMO Field, reached for his ankle and winced in pain. After trying repeatedly to shake off the effects of having Harrison Afful fall on his leg just four minutes into the second half of Wednesday's Eastern Conference final second leg, Altidore limped toward the Toronto FC bench. For a second it appeared as though he might have to leave a match that threatened to end TFC's season and add another emotional letdown in what has been a rough six weeks for the star striker.

Altidore refused to leave the match right away, though, believing he could still make a difference. After having his ankle looked at by the TFC trainer one more time, Altidore limped back onto the field, clearly still feeling the pain, but he fought it off long enough to deliver the play of the game, and the series.

Eleven minutes after first being injured, Altidore worked a give-and-go with Victor Vazquez before mustering enough speed to spring free and slip a shot past Zack Steffen in the 60th minute, allowing a nervous BMO Field crowd to exhale as he let out a roar that had to be building for weeks.

"I couldn't leave the game. I felt like I had more to give," Altidore told FS1 after the match. "There was a chance coming, and luckily enough the chance came when I was still on."

Altidore's gutsy display helped give TFC the goal it needed to hold off a very tough Columbus Crew side and book a return trip to the MLS Cup final. It also gave Altidore some redemption after a rough stretch that included the U.S. national team's failed World Cup qualifying bid, the disappointment of being booed unmercifully by the fans of his first professional team — the New York Red Bulls — and then the red card and subsequent suspension that forced him to miss the first leg of the East final.

Perhaps it was the desperate desire to turn things around after those heartbreaking moments, as well as the memory of last year's MLS Cup final loss, that left Altidore refusing to leave Wednesday's match before he could make his mark. The pain of the ankle injury ultimately forced him out in the 68th minute, but by then he had given his teammates a lead to protect, which they did on the way to a hard-fought 1-0 aggregate victory.

"What can you say? He was barely able to walk, and in that final play where he was able to get the goal — something just switched and he just turned on and he went for it," TFC coach Greg Vanney said. "He went beast mode, or what Jozy does, and he was unstoppable. It was a great ball by Victor, and we needed that goal."

Early on, it looked like fate would be cruel to Altidore and TFC yet again when the Crew came out and controlled the match in the first half. Steffen's diving save on a Vazquez penalty kick in the first half seemed especially dooming. There was a tangible unease at BMO Field as the first half went on, with some TFC fans likely feeling some deja vu as the night felt reminiscent to last year's MLS Cup final loss to Seattle.

TFC couldn't find a goal on that fateful night, but Altidore on Wednesday ensured that the home fans would have a goal to celebrate, and TFC would have a lead to protect, and that's what Altidore's teammates did after he left the match. The Crew pushed hard for a series-winning goal, and had a few moments where it looked like it might come, but TFC's defense held up and secured the team's return to the MLS Cup final.

"A big thing is learning how to grind games out," Altidore said when asked how this year's TFC team was different from the 2016 edition. "I think a game like this, maybe last year we probably don't win."

Altidore and TFC will be hoping the same applies to the MLS Cup final, which is shaping up to offer us a rematch of last year's title game, with Seattle holding a big advantage on Houston in their Western Conference final series that will be decided Thursday. The good news for Altidore and TFC is that the 28-year-old forward will have 10 days to recover from the ankle injury and get ready for another final. As much as Altidore was clearly favoring his ankle after Wednesday's match, it's tough to envision him not being on the field when the MLS Cup final kicks off.

"Jozy is a guy who, in the biggest moments, you want next to you," TFC captain Michael Bradley said. "When you're standing in the tunnel on a night like this, and you look behind you and you see Jozy, it's a damn good thing."

Altidore showed Wednesday just how much the quest for his first MLS Cup means to him, and how important he is to TFC's search for its first MLS title.