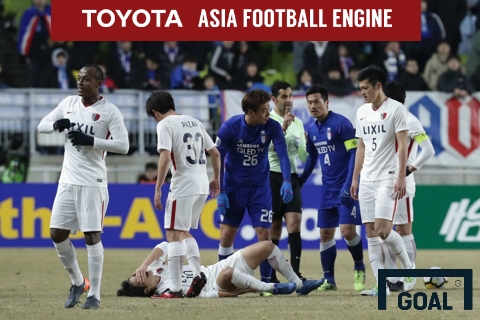 AFC Champions League action enters the knockout stages as the teams vie to enter the quarterfinals...

The AFC Champions League 2018 enters the knockout stages in the East Zone on Monday. Here is a look at what awaits us in a crucial week:

First up on Tuesday in the East Zone is a mouthwatering Chinese derby between Guangzhou Evergrande and Tianjin Quanjian. Potential Chinese Super League champions Guangzhou are up against relative newcomers Tianjin but the stage is the continent this time.

Tianjin finished second in Group E to reach the knockout rounds, while Guangzhou were unbeaten in Group G as they finished top. Interestingly, Tianjin will see their former coach Fabio Cannavaro return as the opposition manager.

Thailand's Buriram United welcome South Korea's Jeonbuk Motors on Tuesday as they look to advance further in the competition. Buriram are returning to the knockout stages for the first time since 2013 and reached here after finishing second in a tough Group G.

Jeonbuk, meanwhile, had few problems in qualifying from Group E as the Korea Republic team won five out of six games to progress to the knockout rounds as the tournament’s top scorers on 22 goals. It won't be an easy night for Buriram for sure.

In what is an all South Korean affair, two former champions - Ulsan Hyundai and Suwon Bluewings - take on each other in an exciting affair. Ulsan returned to the last 16 for the first time since by finishing in second place in Group F, with a resounding 6-2 win over Melbourne Victory securing their passage.

Suwon returned to the knockout stages for the first time since 2015 by topping Group H. On Wednesday, however, it all counts for nothing as two familiar foes vie for the first leg advantage.

Japan's Kashima Antlers take on Chinese side Shanghai SIPG on Wednesday in another intriguing matchup in the Round of 16. Kashima Antlers qualified second in Group H after a defeat to Suwon on matchday six.

Shanghai won three of their first four matches to become one of the first teams to progress to the next round as Group F winners but they are yet to win at home this season in the Champions League.