By Mohammed Ali
OM seek to consolidate first place when they face Auxerre. Lille play already-relegated Arles, as they search for a much-needed win. Goal.com previews the action...

Geoffrey Kondogbia picked up a knock this week, but that news shouldn't trouble Lens in the buildup of this game with Sidi Yaya Keita and Nenad Kovacevic expected to return having sat out for two weeks.

Christian Gourcuff has a near-full panel to select from as they make a late push for European football. The only absentees are fringe players such as Franco Sosa and those with long-term injuries. Les Merius are expected to line up in the same way as last weekend. 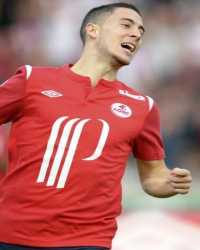 Florent Balmont strained a muscle in his thigh and isn't expected back until the Coupe de France final on May 14 in what is the only injury in the les Dogues camp. Moussa Sow could shake off a thigh problem to play some part.

Arles still have pretty selection problems, but there has been some good news as Camel Meriem is back training normally after missing out last weekend. Key centre-back Bobo Balde is banned.

Les Rouge et Noir have been dealt a blow with the news that John Verhoek picked up a knock last week and is set to miss out. A number of key players are locked in the treatment room with Kevin Theophile Catherine, Abdoul Camara and Yacine Brahimi all missing out. Striker Victor Hugo Montano is banned.

Jean Tigana could retain the side he deployed last weekend, with Michael Ciani and Marc Planus again on the bench. Benoit Tremoulinas is still struggling to shake off a problem.

Yassin Mikari, who has only made six appearances tis season, sits out. No return date set for key defender, Jeremie Brechet to return to action. Additionally, Kevin Anin's season is over and Jacques Faty is a doubt.

Nancy
Benjamin Jeannot is once again doubtful as he struggles to shake off a problem picked up in March on international duty. Good news though as Fouad Rashid has seemingly recovered from a knee injury.

Peguy Luyindula is still struggling to shake off an ankle injury which has hampered him for five weeks. Christophe Jallet, whose recent form has been excellent, is another worry.

Rudy Mater (knee) and Remi Gomis (ankle) are still injury worries for Phillipe Montanier to mull over. However, leading scorer Gregory Pujol and Mamdaou Samassa have shaken off minor knocks and trained ahead of the fixture.

Stephane Mbia has been ruled out until around mid-May after injuring himself in the Coupe de la Ligue final last week. Cesar Azpilicueta is still out with a long-term knee injury and is uncertain to feature again this season having been out since November.

Benoit Pedretti (groin), defenders Stephane Grichting (thigh) and Jean-Pascal Mignot (thigh) are ruled out of the tie creating a selection headache for Jean Fernandez. Delvin Ndinga and Jeremy Berthod are also out.

No fresh worries for Rene Girard in the build up to this clash with the suspended Emir Spahic and attacker John Utaka the only key absentees. Abdelhamid El-Kaoutari returns after a ban.

Alex Dupont's side have been boosted with the news that Yoann Bigne may return for this clash. Omar Daf remains out for the season.

Les Aiglons have a number of players out, many of them picking up knocks in the midweek defeat at the Stade Velodrome. Alain Cantareil (knee), Emerse Fae (long-term), David Bellion (groin), Didier Digard (thigh), Anthony Mounier (thigh), and Gregory Paisley (hamstring) are out in what is a much-changed side.

Gregory Proment and Gregory Tafforeau are the only man injury worries for Franck Dumas.

Xavier Pentecote is the only new addition on the injury list. Yohann Pele is the only other player to miss out, but Franck Tabanou returns after a ban.

The main news from Stade Gerland is that Brazilian winger Michel Bastos looks set to feature after missing six weeks because of knee surgery. Worryingly, Jeremy Toulalan will miss this fixture after twisting a knee in midweek, while Cris is a doubt. Miralem Pjanic has purged a suspension.

Yoic Ravet picked up a knock in training last week and sits out, but there are no other significant issues for les Verts.

Daniel Niculae has a hip problem which adds to a lengthening injury list which has already consumed the likes of Djimi Traore and Moussa Maazou. Mahamadou Diarra missed out last weekend due to illness, and he should return.