The footballer-turned-actor has just gotten all political, and has called for an economic revolution...
As more and more countries around Europe cripple financially, and as public protest and civil unrest increases, former Manchester United and France legend Eric Cantona has called for a world revolution in order to cleanse society of what he deems is the reason for this depression – the banks.

Cantona, who spent five stunning years with Man Utd in the 1990s winning four Premier Leagues and was also capped 45 times by France, has become a figurehead in an organised campaign designed to bring down the banks.

The Frenchman believes that the reason for the economic misery around the world, which is set to worsen substantially over the coming months and years, is down to the elite private banks like the US Federal Reserve and Rothschild group, who he says are controlling the world and enslaving the people.

Cantona says that everyone’s problems can be solved, and no one will endure any more financial misery, if they simply withdraw their money from their banks. If everyone does this, he claims, the banking system will collapse.

"I don't think we can be entirely happy seeing such misery around us. Unless you live in a pod,” the footballer-turned actor told the newspaper Presse Océan.

“But then there is a chance... there is something to do. Nowadays what does it mean to be on the streets? To demonstrate? You swindle yourself. That's not the way any more.

"We don't pick up weapons to kill people to start the revolution. The revolution is really easy to do these days. What's the system? The system is built on the power of the banks. So it must be destroyed through the banks. 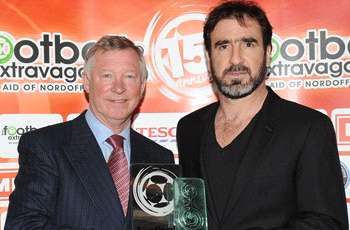 The 44-year-old continued: "We must go to the bank. In this case there would be a real revolution. It's not complicated; instead of going on the streets and driving kilometres by car you simply go to the bank in your country and withdraw your money, and if there are a lot of people withdrawing their money the system collapses. No weapons, no blood, or anything like that.”

French-based movement – StopBanque – has coordinated a withdrawal of money from French banks on December 7 and claim to already have more than 14,000 people ready to follow through this action. Their campaign on the website Bankrun2010.com has become much publicised throughout Europe, with calls for similar bank withdrawal movements in other countries too.

Cantona’s interview has massively publicised this, and the video below has become a Youtube sensation with over 150,000 hits on this version alone.