By Matt Monaghan
Memorable Red Devils victories against Lancashire rivals...
Manchester United and Liverpool's bitter rivalry means either side enjoys nothing more than getting one over the other.

Wins snatched at the death or with extra significance as the sides chase silverware take pride of place in the memories of supporters.

Goal.com looks back at United's most celebrated victories over their opponents from up the M62...

United burst Liverpool's dream of claiming a historic first 'treble' in English football with victory in front of 100,000 fans at Wembley.

Bob Paisley's Liverpool side had just lifted the league title and were days away from a victorious trip to Rome for the European Cup final.

United striker Stuart Pearson opened the scoring. After an equaliser from the Merseyside outfit, a Lou Macari shot fortuituously deflected off Jimmy Greenhoff in to the back of the net to cue celebrations from the Red Devils. 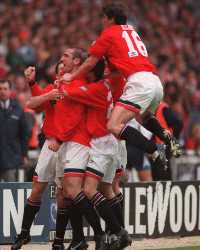 The game may have been dull as dish water, but the United fans at Wembley didn't care as Eric Cantona struck a last-minute winner.

Cantona's accurate volley completed his redemption from the infamous 'kung-fu' kick that saw him banned a year earlier. Importantly, it sealed United's status as the first club in English history to win the double of FA Cup and Premier League twice.

Although low on thrills and spills, the Frenchman's strike was worthy of winning even the most exciting contest. A corner troubled 'calamity' goalkeeper David James, and his weak punch fell to Cantona, who fired a shot through a sea of Liverpool defenders in to the back of the net.

Rarely has Old Trafford erupted in such style as when Ole Gunnar Solskjaer sealed a famous last-minute turn around.

The Norwegian's less heralded injury-time strike of the 'treble' season came in the early stages of the FA Cup. After falling behind to an early Michael Owen goal, United hammered Liverpool without effect until Dwight Yorke tapped in an equaliser with two minutes to go.

In the relentless fashion to come, the hosts smelt blood and the 'baby-faced assassin' was on hand to claim the spoils. 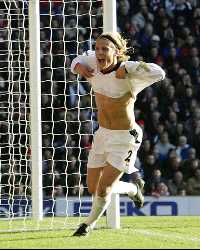 Diego Forlan wrote his name into United folklore after his unlikely double downed Gerrard Houllier's side.

The goal-shy Uruguayan was the laughing stock of the division and the butt of many jokes. All snide remarks were cast aside at Anfield upon this brace.

His fortune owed much to Liverpool shot-stopper Jerzy Dudek. The first followed a comedic flap from the Polish international with the easiest of back headers from Jamie Carragher falling through his legs to the grateful Forlan.

Even the second, although a strong shot, nutmegged the hapless former Feyenoord man to seal the victory for the Mancunians.


Nothing tastes sweeter than a last-minute winner at the home of your fiercest rival. John O'Shea's tap-in silenced the Kop and proved crucial in getting United's name back on the Premier League trophy.

Rafa Benitez's side had out-played the visitors throughout the match, with only a solid defensive display keeping them out.

As the match ticked past the 90-minute mark a cheap free-kick won on the side of Liverpool's penalty box was hammered in by Cristiano Ronaldo. A spill from Pepa Reina fell in to the path of the Irishman, who made no mistake from six yards.