By Neil Jones
Delight for Kuyt but Greek tragedy for Kyrgiakos...
You could almost hear Rafael Benitez pacing the floor of his Merseyside home like an expectant father, just waiting for his phone to ring with news of another injury to a star on international duty, another spanner in the works of Liverpool's season.

As it happens, there was no further bad news for the Spaniard - who had already seen Martin Skrtel and Fabio Aurelio collect injuries that will keep them out of action for a number of weeks, and Daniel Agger forced to withdraw from the Denmark squad with a knee problem. For once, Liverpool's stars will return to Melwood tomorrow untroubled by their international exploits.

But how did they fare? Goal.com examines the performances of Anfield's finest this week...

Fernando Torres (Spain)
The jewel in Benitez's crown, and the one whose fitness will have been of greatest concern. Liverpool's manager has reportedly been at loggerheads with Spain's coach over the utilisation of their premier striker, but will have been relieved to see his prized possession come back with half a game and, more importantly, no ill-effects, under his belt.

Torres replaced David Villa at half-time in Spain's convincing 2-0 win over France in Paris, and though El Nino was unable to add to first half goals from Villa and Sergio Ramos, the 45 minutes of football will do the 25-year-old's match fitness the world of good.

Pepe Reina was an unused substitute for Spain in the same game.

Steven Gerrard (England)
All eyes were on Stevie G as he captained England for the eighth time in his career, and despite a slow start, Liverpool's skipper eventually ended up with a win under his belt as Fabio Capello's men came from a goal down to defeat Egypt 3-1 at Wembley.

Gerrard was not at his very best throughout, and was withdrawn for the impressive James Milner during the second half.

Yossi Benayoun (Israel)
Israel's captain, who has only recently returned to action following a fractured rib, led by example in Timisoara as he scored the opening goal, his 20th for his country, in an impressive 2-0 win over Romania.

Benayoun struck in first-half stoppage-time, bursting from deep with a one-two, before slotting calmly into the corner of the net, as his side recorded an eye-catching away success. 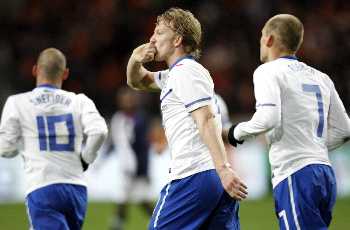 Dirk Kuyt (Netherlands)
It seems that Mr Reliable for Liverpool is the same for the Netherlands, as Kuyt set the Oranje on their way to a 2-1 win over a vibrant United States side in Eindhoven, converting a first half penalty with aplomb for his 14th goal for his country.

Kuyt stepped forward in the 40th minute to dispatch calmly past Everton 'keeper Tim Howard, after Wesley Sneijder had been felled in the box, and was given a rousing ovation when he was withdrawn late in the game.

Ryan Babel replaced Kuyt in Eindhoven, but was given just ten minutes to make an impact in his 37th appearance for the Dutch side.

Javier Mascherano (Argentina)
Argentina's captain may have been rather understated in his side's 1-0 victory over Germany in Munich but, given the inconsistent form of Diego Maradona's side in recent months, will be delighted to claim a major scalp just months before the World Cup.

Gonzalo Higuain scored the only goal,but Mascherano was at the heart of the game, nullifying the German midfield's threat and providing a platform from which the likes of Juan Sebastian Veron, Angel Di Maria and Lionel Messi could work their magic.

Kyrgiakos, earning his 56th cap for Otto Rehhagel's side, was left trailing by Senegal's Mahamadou Niang in the 72nd minute, as the Marseille man gave his side the opening goal in a 2-0 win for the Lions of Teranga.