France head coach Didier Deschamps hailed Olivier Giroud for responding to a "difficult season" at Arsenal with his first international hat-trick on Friday.

The 30-year-old netted his side's first three goals in their 5-0 friendly win over Paraguay in Rennes, with Moussa Sissoko and Antoine Griezmann also on the scoresheet.

It was the first hat-trick scored for France since David Trezeguet back in 2000, while it took his tally to 16 goals in his last 16 starts for his country. 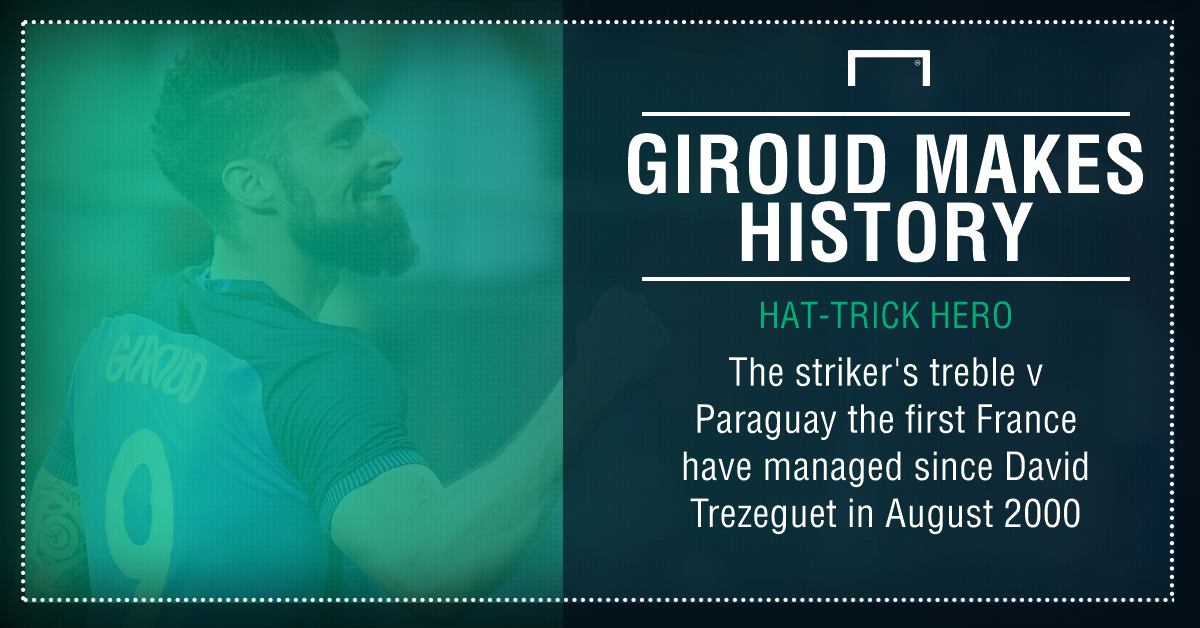 Giroud's impressive form on the international stage has continued despite him struggling for consistent football at Arsenal, with manager Arsene Wenger handing him only 11 starts in the Premier League last season.

And Deschamps is delighted with the way the former Montpellier man puts club difficulties behind him to keep impressing for Les Bleus.

"He's our best goalscorer, he continues to score and when he doesn't, someone next to him often scores," Deschamps told RMC. "He responds even when he's had a difficult season with his club.

"But even there, with little playing time, he is still effective. So I'm happy for him."

Deschamps was pleased with the emphatic nature of the win as France prepare for a World Cup qualifier against Sweden next Friday.

"It's a good thing. Our forwards scored, it's very good. Now I know that we'll have a very different game against Sweden," he said.

"As an opponent, they're ranked just beneath us. Getting a good or very good result there will put us in an even better position to qualify for the 2018 World Cup.

"It's better to have played a match where we had confidence. The whole group was very focused on this match so that we could prepare as best as possible for the one that awaits us."