By Gary Niblock
Leverkusen's defence had no answer to a Michael Bradley-inspired Gladbach...
The Bundesliga staked another claim to the title of the world's most exciting league as Borussia Moenchengladbach stunned Bayer Leverkusen with a 6-3 win at the Bay Arena in a pulsating encounter that surpassed even Mainz's comeback from three goals down to win in Wolfsburg.

The visitors took a deserved lead after twenty minutes. Everyone momentarily stopped, expecting a free-kick to be given for an Arturo Vidal shove on Juan Arango. However, the utility man paid for not playing to the whistle as Mohamadou Idrissou nicked the ball away before crossing the ball into the box where Patrick Herrmann blasted the ball past Rene Adler from close range.

Four minutes later Eren Derdiyok headed Leverkusen back into the game. The Swiss striker got in front of Filip Daems at the near post as Gonzalo Castro planted a magnificent cross on the former Basel man's head.

Rene Adler was pressed into action five minutes before the break, making a superb double save. However the keeper could not pull off a third as he spilled a Thorben Marx shot into the path of Roel Brouwers who showed why he was the leading scorer among defenders last season by making no mistake to restore the visitors' lead.

Gladbach scored their third a minute before the interval after a chaotic passage of play. Juan Arango danced through the Bayer defence before being thwarted by Michael Kadlec. Sensing a backline in disarray, Idrissou showed the wherewithall to pick up the pieces and find Herrmann who blasted the ball high into the net as Adler was left with no chance. 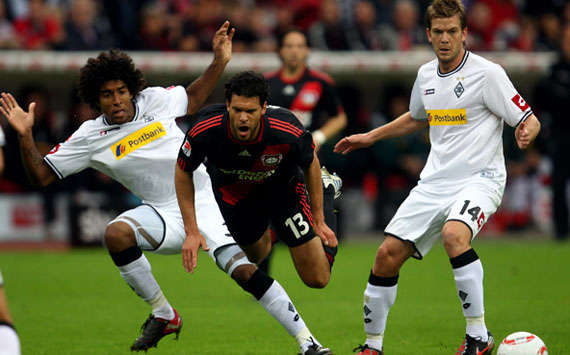 Just as the game threatened to return to a normal tempo, Gladbach scored yet again. Juan Arango exhibited his prowess from free-kicks as he curled the ball left-footed home into the corner from just shy of 30 yards.

Gladbach then conceded a needless penalty after 56 minutes. Marx was adjudged to have brought Vidal down. The Chilean stepped up himself to send Bailly the wrong way for Bayer's second.

Idrissou then received his just rewards for a bright display on the hour mark when he stabbed home the rebound after Adler had beaten away a Marco Reus volley. The young German winger Reus then got on the scoresheet, scoring a sixth on 69 minutes when he glided into the box before unleashing an unstoppable left-foot shot into the net past Adler for his first goal of the season.

Leverkusen clawed a goal back four minutes later when Bailly could only get a hand to a hopeful Nicolai Jorgensen punt over the top with Stefan Kiessling taking advantage to tap the ball into the empty net.

This result raises serious questions over whether Leverkusen can challenge for the title as their defence was horribly exposed by a Gladbach side who are far from the league's most potent attacking force. However it promises to be an entertaining season for Die Fohlen should they continue to play in such an entertaining fashion.