By Jonathan Mitchell
Inter move up to second in Serie A after win over Sampdoria...


Inter moved ahead of Napoli into second place and closed the gap on league leaders Milan with a 2-0 win over Sampdoria tonight.

Wesley Sneijder was the Nerazzurri hero, scoring a sensational second half free-kick to break the deadlock, before Samuel Eto'o added a second deep into injury time to secure a hard-fought three points.

After a slow opening to the match, a Sneijder-inspired Inter began to assume control, with the Dutchman causing problems with his deliveries from wide areas.

In the 10th minute, he whipped over a cross from out near the touchline which Andrea Ranocchia arrived right on cue to meet with an outstretched boot, but the young defender failed to control the effort and poked the ball over the crossbar.

Three minutes later, he fired over another inviting cross. However, the outcome was the same as Houssine Kharja sent a downwards header into the ground and wide.

But it was Sneijder himself who finally tested Gianluca Curci when he picked himself up after winning a free-kick 25 yards out and fired in a shot which the Sampdoria flew to his right to grasp.

Inter continued to dominate while the hosts periodically broke forward on the counter attack, but the match hit a 20-minute lull in which the tempo dropped and neither side looked particularly threatening.

However, the game sparked back into life in the closing minutes of the first 45 as both sides manufactured their best goalscoring chances.

In the 41st minute, Kharja picked out Samuel Eto’o, who was lurking on the edge of the box, with a fantastic cut-back, but the Cameroonian’s effort was weak and Curci dropped to smother the ball with absolute ease.

Back came the Blucerchiati, and Andrea Poli charged on to a deft Stefano Guberti lay-off before watching as his powerful low strike agonisingly cannoned back off the outside of the post and away to safety. 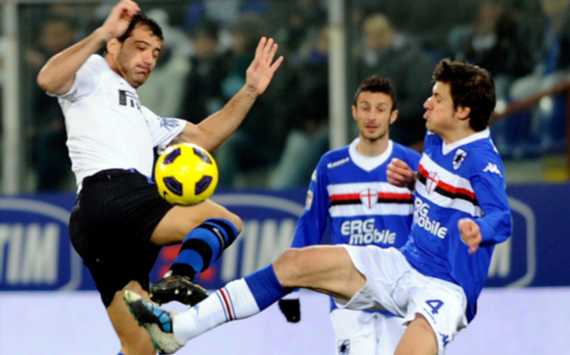 The second half continued in a similar vein to the opening half, with both sides appearing to lack drive and a cutting edge up front.

If anyone was likely to make something happen, however, it was Sneijder who again looked the most threatening player on the park.

On the hour mark, he latched onto a loose ball and rifled a left-footed shot inches wide of Curci’s right-hand post.

Massimo Maccarone almost equalised for the hosts just two minutes later when he raced onto Angelo Palombo’s searching pass over the top, but Julio Cesar was alert to the danger and darted from his line to make a crucial block.

From then on, Inter asserted control of proceedings and it was no surprise when they took the lead in the 73rd minute. Nor was it a surprise that it was a fantastic Sneijder free-kick from 30 yards out that flew past Curci to break the deadlock.

Sampdoria failed to heed the warning delivered by Sneijder’s deadball delivery and continued to commit needless fouls on the edge of the area. And the Dutchman was only too happy to try and take advantage, firing another ferocious free-kick against the base of the post.

The hosts threw caution to the wind in the closing stages, changing from a 3-5-1-1 to a 4-4-2 in an attempt to find an equaliser. But the eventual outcome was a second Inter goal when Eto’o collected Dejan Stankovic’s intelligent, raking free-kick and fired low under Curci to seal the points.

For Inter it will be a case of more of the same when they face Genoa at the Giuseppe Meazza a week today.

Sampdoria, meanwhile, will be desperate to take three points from their second consecutive home fixture, when Cesena visit the Luigi Ferraris in next Sunday’s early kick-off to avoid being sucked closer to the relegation battle.