By Vasil Kotsev
Rafael Benitez's men suffered yet another disappointing defeat...
Lazio cruised to an easy victory over a surprisingly poor Inter side to go level on points with Milan at the top of the Serie A table. Giuseppe Biava gave the hosts the lead in the first half, and Mauro Zarate added another after the break. Goran Pandev clawed one back for the visitors, but Lazio responded with a delightful goal from a free-kick by Hernanes in the waning minutes of the game to pile even more misery on the Nerazzurri, who succumbed to their fourth loss of the season.

The Aquile started the game brightly and tried to put the champions under pressure right from the first whistle. The first real chance of the match, however, fell to Inter near the fifteen minute mark and it was Sulley Muntari who failed to capitalise on a rare mistake by Lazio's defence.

The hosts managed to break the deadlock in the 27th minute with a rather fortunate goal by Biava. Hernanes powered a header at goal, following a corner on the left, which Luca Castellazzi could only parry, Esteban Cambiasso managed to clear the ball off the line with an overhead kick, but it rebounded off the ex-Palermo man's chest and into the net.

The goal woke up Inter who were struggling to repel the waves of Lazio attacks and went close through Wesley Sneijder, who stung Fernando Muslera's hands with a powerful free-kick. There was even more sore news for the Nerazzurri as Dejan Stankovic was forced to leave the pitch due to injury four minutes later.

Lazio, however, quickly regained control of the game and played out the half confidently defending and retaining possession. 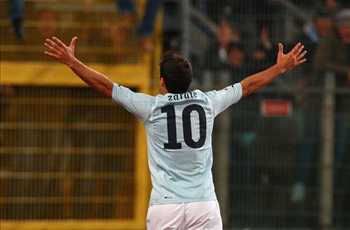 The hosts continued to dominate the game in the second period and deservedly doubled their lead in the 52nd minute through the impressive Zarate.

The Aquile then had a golden opportunity to extend their advantage even further but Sergio Floccari was unable to slip the ball past Castellazzi when he was one-on-one with the Beneamata 'keeper.

Stefano Mauri had an excellent opportunity of his own to put the match to bed but he somehow missed the net from six yards out.

Completely against the run of play, Inter scored one of their own. Pandev managed to make his way into a crowded penalty area and halved the hosts' lead in the 74th minute with a fine finish from the left side of the box. This strike gave much needed impulse to the Nerazzurri who started pumping bodies forward in search of an equaliser.

The champions came within a whisker of levelling matters but Ivan Cordoba wasn't able to smash his shot past Fernando Muslera from close range.

The Aquile were able to handle everything Inter threw at them, and even managed to score a third, courtesy of a delightful free-kick by Hernanes in the late going. Deep into injury time Sneijder hit the bar with a thunderous shot, but it was too little, too late as the game finished 3-1.