By Jonathan Mitchell
Cameroonian nets to preserve Nerazzurri's unbeaten home record...
Samuel Eto'o prodded home a late leveller to ensure that Inter and Sampdoria shared the spoils at the Giuseppe Meazza this evening.

Although the home side came perilously close to losing after Stefano Guberti gave his side a shock 62nd minute lead, the overwhelming emotion here will be one of disappointment for the Nerazzurri as they failed to secure all three points and close the gap on league leaders Lazio.

The first half kicked off in the middle of a Milanese downpour, but the early action was certainly better than the weather as both teams made a lively start.

Wesley Sneijder tested Gianluca Curci with a low drive in the 3rd minute, and then Antonio Cassano fired in a similar effort at the opposite end two minutes later. Like Curci, Julio Cesar was equal to the effort, however.

Curci made a more telling stop in the 10th minute when he flew to his right to block Lucio’s hooked effort after nippy Brazilian Coutinho had picked out his compatriot’s run with an intelligent flick.

Back came Sampdoria, and Fernando Tissone fired inches wide of the upright after superb work by Cassno wide on the right.

Inter began to control of the game from then on in and had Sampdoria penned in their own half of the field for huge swathes of the remainder of the first 45.

Their dominance was such that Lucio could often take leave of his defensive duties to maraud forward and try and open the scoring. He came very close to doing so in the 18th minute when he glided past a few challenges and fired a low cross towards the back post, but Luciano Zauri was on hand to clear the danger.

The Blucerchiati still looked threatening on the counter attack, though, and went extremely close to snatching a shock lead in the 32nd minute. Cassano found Guberti with a deep cross and the wide-man headed back across goal to Pazzini, who swung out a boot to beat Maicon to the ball and direct the ball towards goal. Julio Cesar was in the right place at the right time and grasped the ball on the line.

Inter continued to control proceedings but struggled to find a way past Sampdoria’s stubborn resistance and the half ended goalless. 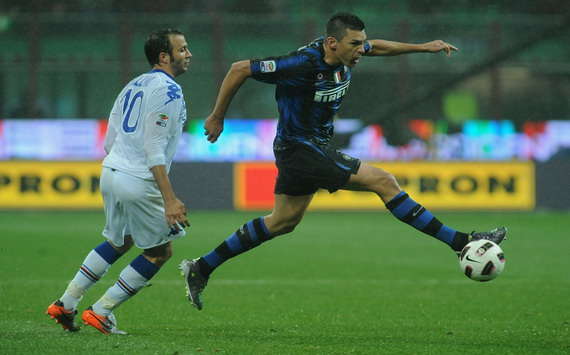 The home side picked up where they left off after the break and almost opened the scoring just before the hour mark when Maicon met Coutinho’s cut back with a ferocious volley, but Zauri did superbly well to clear off the line.

Yet it was the Blucerchiati who took a shock lead in the 62nd minute. Cassano dispossessed the alarmingly slack Cristian Chivu and picked out Guberti with a pin-point cross and the Sampdoria wide-man volleyed home from the penalty spot.

Curci preserved his side’s lead with a couple of superb saves to deny Coutinho and Eto’o, but injured himself while flipping away a Maicon cross and had to be replaced by back-up goalkeeper Junior Costa.

The replacement had barely taken his place between the sticks when Eto’o ghosted to the near post to knock home Coutinho’s inviting cross and restore parity with just 10 minutes left on the clock.

The hosts went all out for the win in the closing stages but couldn’t find that all important second goal and the match finished 1-1.

Inter return to action earlier than usual when they face Genoa in the Luigi Ferraris next Friday, where they will be looking to get back to winning ways to peg back early pacesetters Lazio. Sampdoria, meanwhile, will hope to take advantage of Cesena’s poor form when they face the Seahorses two days later.