By Jonathan Mitchell
Derby d’Italia ends in stalemate...
Tonight's derby d'Italia lived up to its repuation for passion and intensity, but the same qualities that make the fixture such an anticipated occasion in the Serie A calendar are the same ones that can also stifle the match as a footballing spectacle - and that was certainly the case tonight as the sides fought out a tough 0-0 draw.

The first half was a cagey affair in which both sides cautiously felt their way into the match before attempting any adventurous attacking play.

In fact, it took until the 12th minute before either team managed a shot on target and even then, it was a tame 35-yard volley by Dejan Stankovic which Marco Storari caught with absolute ease.

Inter had the better of the opening exchanges but it was the away side who gradually forced their way into the game and managed to manufacture a couple of goal scoring chances mid-way through the half.

Serbian wide-man Milos Krasic burst into life in this period, first volleying wide of Julio Cesar’s right-hand post in the 21st minute and then forcing a superb stop from Inter’s Brazilian goalkeeper with a fine angled drive 60 seconds later.

The Old Lady had the ball in the net in the 32nd minute when that man Krasic cut back for Vincenzo Iaquinta to tap into an empty net, but the strike was correctly ruled out for offside.

A thigh strain ruled Diego Milito out of Rafael Benitez’s starting line-up, but an injury to Jonathan Biabiany meant that ‘Il Principe’ was called into action sooner than expected. And his introduction appeared to galvanise Inter.

Esteban Cambiasso fired over the crossbar then Samuel Eto’o had a snap-shot saved by Storari as Inter piled on the pressure in the final five minutes of the half.

With the referee poised to blow his whistle for half-time Milito drifted in behind Giorgio Chiellini to meet Eto’o’s intelligent floated cross, but his outstretched toe only succeeded in prodding the ball wide of the post and the half ended goalless. 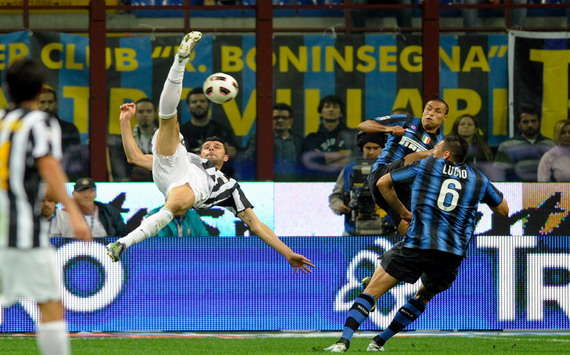 Both sides were forced into changes at the break with Marco Motta replacing Paolo De Ceglie for Juventus, while Davide Santon came on for Ivan Cordoba for Inter.

The substitutions had little impact on the game, however, and the second half started in a very similar fashion to the first.

Wesley Sneijder was the first player to threaten when he drilled a ferocious free-kick just past the post.

Then Krasic decided to pick up where he left off in the opening 45 and went on a mazy dribble before firing a shot at goal, but Julio Cesar flung himself across goal to deny the Serb a stunning opening goal.

Storari was not to be outdone and a produced a superb stop of his own, pushing Sneijder’s low strike behind for a corner one minute later.

Both goalkeepers were proving unbeatable and Storari pulled off the save of the match in the 67th minute when he instinctively flung himself forward to block Maicon’s header from just 4 yards.

The match was a real end-to-end affair at this stage and Julio Cesar denied Fabio Quagliarella with yet another quality save.

On the only occasion that either goalkeeper was likely to be beaten Milito rolled the ball wide of the far post with the goal at his mercy after Cambiasso picked him out with a delicate chip.

By the 75th minute it was clear that neither side would break the deadlock and it was no surprise when the final chance of the match – an Alessandro Del Piero free-kick – was caught by Julio Cesar to ensure that the match would, rather inevitably, end goalless.

Both sides now face a two-week hiatus due to the upcoming international break in which the Azzurri travel to Northern Ireland and then play the Serbia at home.

Serie A action resumes on Sunday, October 17 when Inter travel to the island of Sardinia to face Cagliari in the early afternoon kick-off, while Juventus host Lecce at the Stadio Olimpico di Torino a couple of hours later.