COMMENT: The noise, the colour and its sheer size make Dortmund’s Sudtribune an intimidating sight for opponents. There is nowhere else quite like it - as Juventus will find out
By Brian Oliver

When Borussia Dortmund and Juventus are ready for the second leg of their UEFA Champions League last-16 tie on Wednesday, they will walk through a long, dark tunnel on to the pitch, where they will be greeted by a roar so loud it will seem that the ground is shaking.

“This dark tunnel, it’s exactly two metres high, and when you come out it’s like being born,” said Jurgen Klopp, Dortmund’s popular manager. “You come out and the place explodes – out of the darkness, into the light. You look to your left and it seems like there’s 150,000 people up on the terrace all going completely nuts.”

That terrace, which becomes seated for European matches, is officially the Sudtribune (South Stand) but is better known as the Yellow Wall. It is bigger and noisier than any other famous gathering of fans around Europe and, arguably, the world. 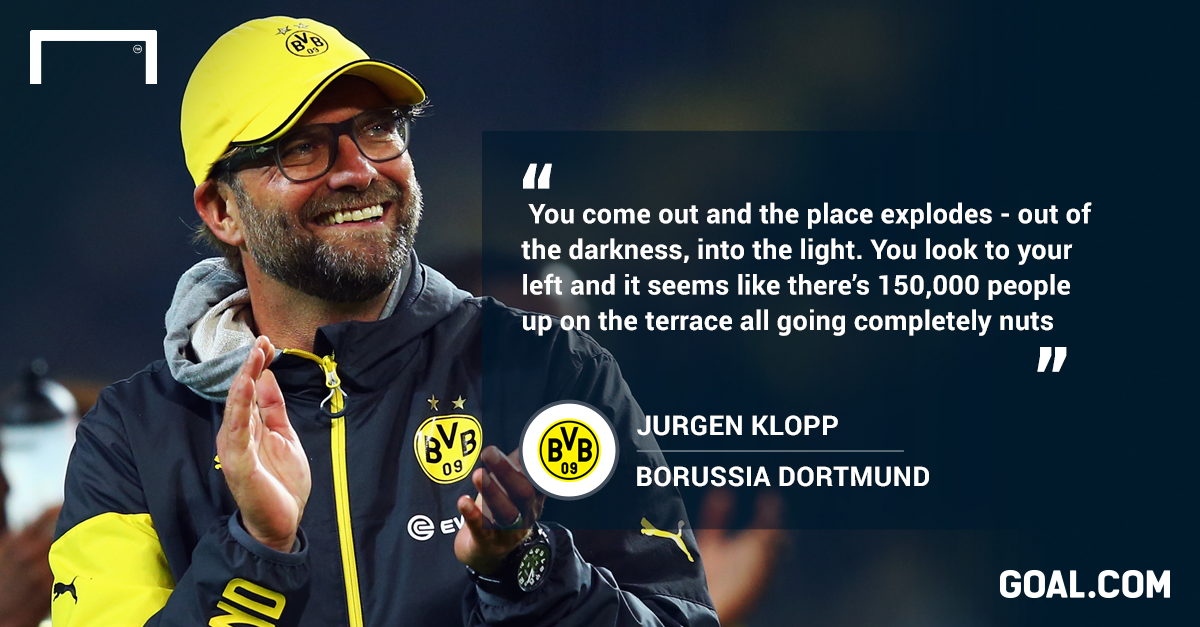 When Bastian Schweinsteiger, the Bayern Munich and Germany midfielder, was asked before a game whether he was more worried about Dortmund's players or their manager, he said: “It’s the Yellow Wall that scares me the most.”

“I don’t want to sound arrogant and say Dortmund have the best fans in the world. But they have the most, and if the Yellow Wall isn’t the noisiest, where is?” said Marc Quambusch, a film-maker who has just finished working on a new documentary about the history of Borussia Dortmund.

Dortmund will be hoping that Wednesday is one of those special occasions, just like the famous night in 2013 when they thrashed Jose Mourinho’s Real Madrid 4-1 in the Champions League semi-final.

“That was unforgettable, one of the great experiences of my life,” added Quambusch, who has has supported the team for 40 years. “It’s always very emotional on the South Stand but at that game you could sense the atmosphere in many ways – hear it, feel it, smell it. Wow! It was amazing.”

Gary Neville, the former Manchester United and England player who now works for Sky Sports, agrees. A few months after that match he wrote: “Of the hundreds of matches I’ve covered in the past few years, none beats the atmosphere for Dortmund when they beat Real Madrid.

“While it was a memorable and important match, it felt more than that. Seeing those Dortmund players sat on the pitch at the end of the game in awe of their fans, you got the feeling players and fans were as one.”

That bond is very special. The human bricks in the Yellow Wall are part of the team, all 24,454 of them.

“The supporters are very conscious of their own performance,” said the acclaimed author and Dortmund fan Uli Hesse. “When I talked to groups of ultras for my book about the fans they looked back and said: ‘We did well in this game, we weren’t at our best in that one. We need to improve.’ They were talking about their own performances, not the players. Their attitude is ‘We contribute just as much as the players do.’ 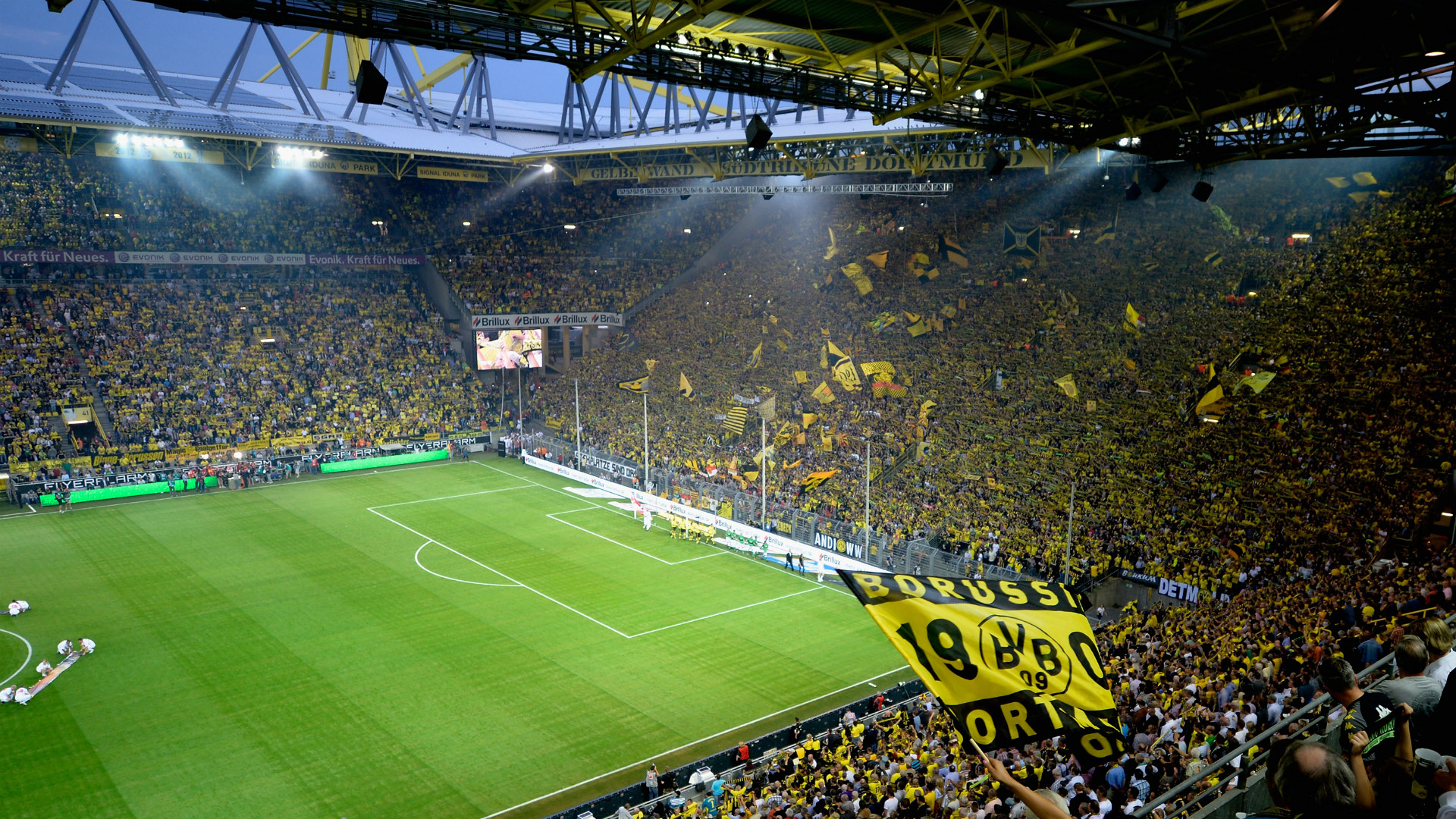 The Yellow Wall before a Bundesliga match against Werder Bremen in 2012. Photo: Getty Images
“They are very conscious of the fact that they follow the best-supported team in football, with 80,000 at every home game. They call themselves the best, and they are very proud.” When Dortmund reached the 2013 Champions League final they received more than half a million ticket applications.

The Sudtribune was built in the early 1970s with room for 12,000, and rebuilt at double that size in the 1990s, just when Dortmund started winning trophies.

The Westfalenstadion (now renamed Signal Iduna Park) was not originally a venue for the 1974 World Cup in West Germany but when Cologne withdrew as a host city, Dortmund took four games. Unlike most other venues, it had no running track around the pitch and the club could boast of having a “pure” stadium.

“It had more terracing than the others and was said to be like an English stadium. The fans were noisy like English fans, and we were very pleased about that because at the time England had the best fan culture,” said Hesse.

“That’s not true any more and German fans are quite sad when they go to games in England. The atmosphere has died because there is no terracing, only seats.”

The Yellow Wall is a new phenomenon, and is on the way to displacing the Kop at Anfield as the most revered bank of supporters in world football.

Nobody knows who dreamed up the name. “But when you are on the pitch looking up at the South Stand, it is so steep and so large that it’s only natural to call it a wall,” said Quambusch. 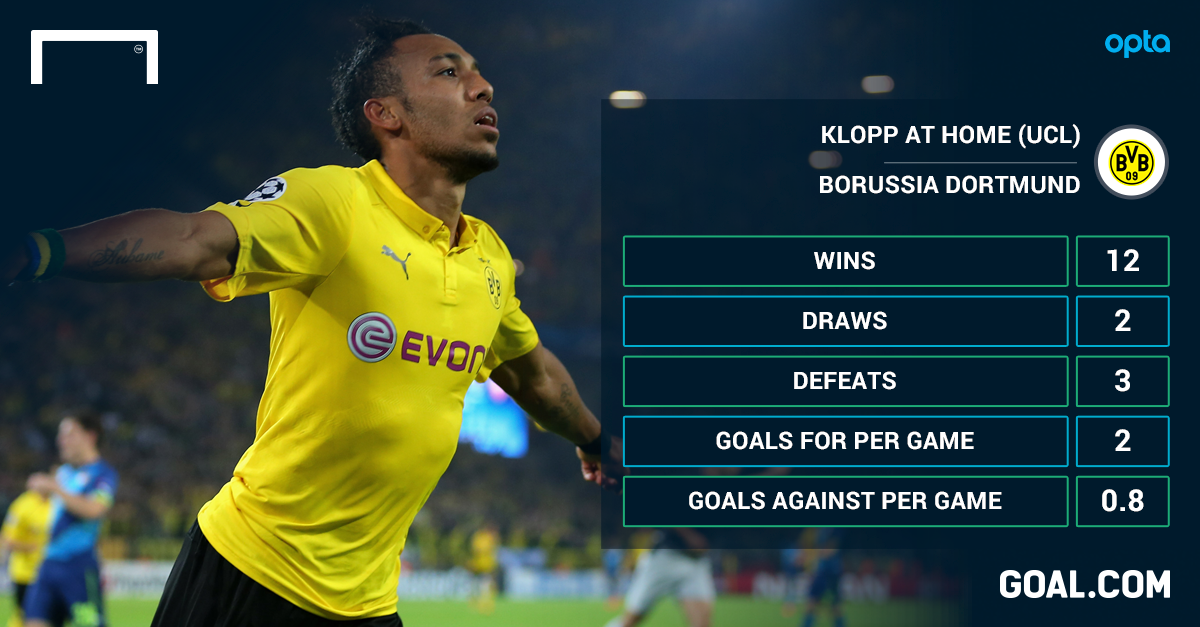 Hesse believes the stand was first called the Yellow Wall in 2005, by a group of ultras who made a giant banner that hung from South Stand saying ‘Gelbe Wand Dortmund’ (Yellow Wall Dortmund).

That same ultras group had previously arranged choreography that featured a giant banner, more than 30 metres wide, with a quote from Oscar Wilde, the nineteenth-century English playwright: ‘We are all in the gutter but some of us are looking at the stars.’

“The ultras then added their own quote, ‘At the end of the dark alley shines the Yellow Wall’ and that is where the name comes from,” said Hesse.

The rebuilt stadium hosted World Cup games again in 2006, which is when Englishman Matthew Gerrard first saw a match there. He has been back 25 times and prefers the Yellow Wall to anything on offer in England.

“Even 45 minutes before the game the place is buzzing,” said Gerrard, a radio reporter from Kent. “When there’s a goal you get showered in beer and the ground shakes. It’s every bit as good as it looks on the telly.

“The atmosphere is something to behold. There’s nothing better in football than the Yellow Wall urging the team on.”

Marc Quambusch is one of the creators of the film Am Borsigplatz geboren - Franz Jacobi und die Wiege des BVB (Born at the Borsigsquare - Franz Jacobi and the birth of Borussia Dortmund).

Uli Hesse is the author of Unser Ganzes Lieben (Our Whole Life): Die Fans des BVB and Tor! The Story of German Football.